One of the TJ08-E enclosure’s main features is providing excellent cooling performance. To improve cooling performance over the original TJ08 case, a SilverStone "Air Penetrator" 180mm fan has been installed behind the front panel to create a virtual airflow tunnel through the chassis with positive air pressure. SilverStone claims that by designing the TJ08-E with the positive air pressure concept, it enables better cooling performance than traditional chassis but also helps to prevent dust from penetrating into the chassis by use of a large, easily accessible filter on the intake fan and forcing air out of the chassis through unfiltered openings. There is also a top mounted air intake grill covered by a magnetic dust filter that supplies air directly into the power supply. 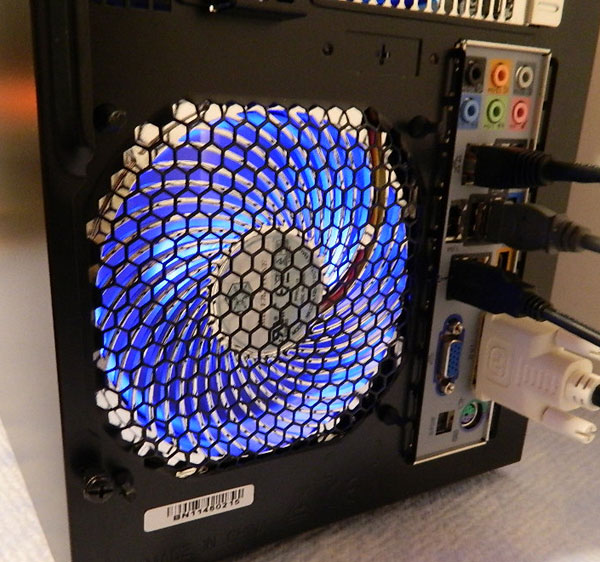 The TJ08-E enclosure has an available exhaust grille on the back so our friends at SilverStone sent along a couple of their 120mm blue LED fans for us to use during our review. 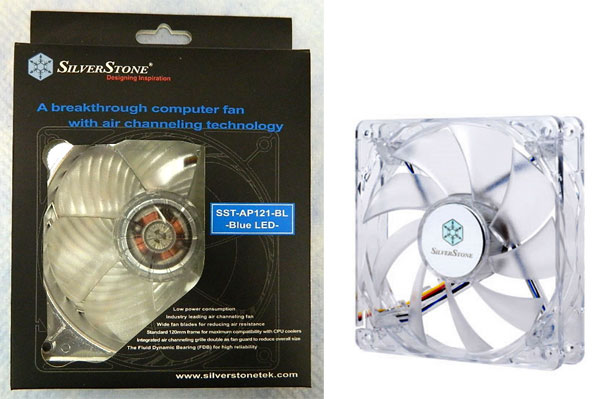 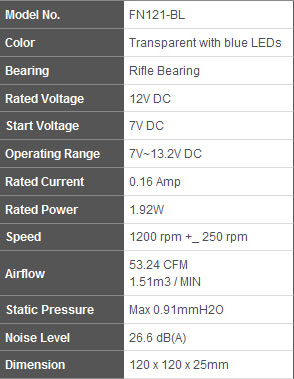 One of the more unique features of the SilverStone case fan is the 4-pin cable adapter that provides three different voltages (speeds) for operating the fan. The fan starts and runs reliably at 5V and is virtually silent at that speed as you can see in the table below. 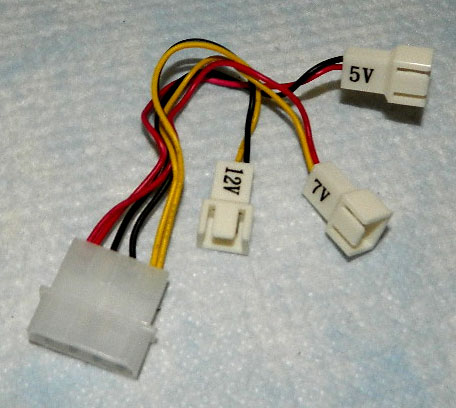 Another nice feature that comes included with these fans is the rubber, vibration isolation mounts that can be used instead of screws.

With the 180mm intake fan in front and the 120mm blue LED fan mounted in the back, we took sound pressure level measurements at various speeds to see how quiet the case could actually be. Even with the 180mm intake fan operating by itself in low speed, there was still a lot of air flowing through the case. The following table lists the noise generated by the two case fans while operating at different speeds with the side panels and top on. Sound Pressure Levels were taken 3’ from the front of the TJ08-E enclosure. The ambient background noise level was approximately 26 dBA.

With both fans running at full speed the noise is definitely noticeable and may be more than you want for a quiet desktop PC or HTPC, but it does provide a LOT of airflow. The single large 180mm intake fan will be more than adequate for most users but adding the extra rear exhaust fan gives lots of options for fine tuning the airflow and noise levels. My ultimate combination of choice is highlighted in yellow above. And even though you might not be able to directly see the blue LED fan on the back, it does produce a subtle blue glow on the wall behind the PC which can add a nice aesthetic affect in a darkened room. 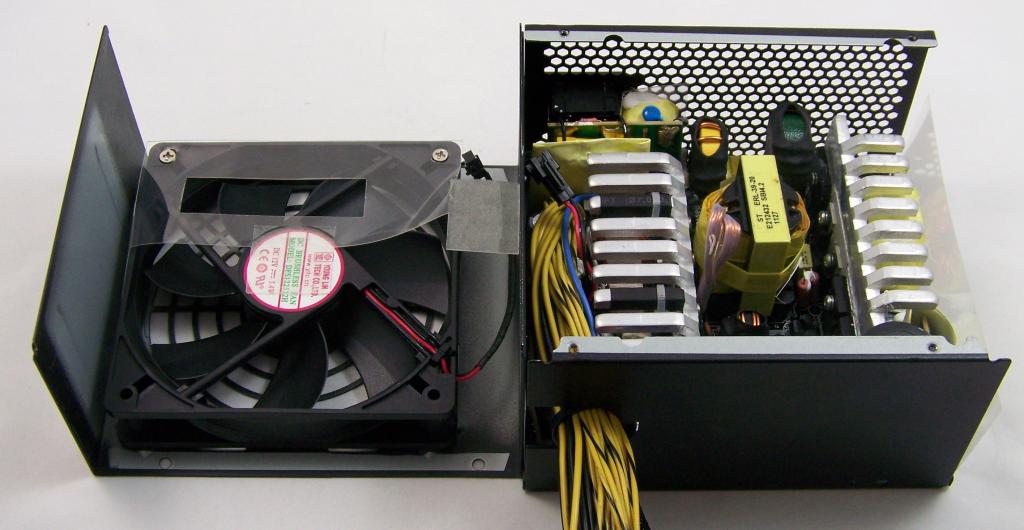 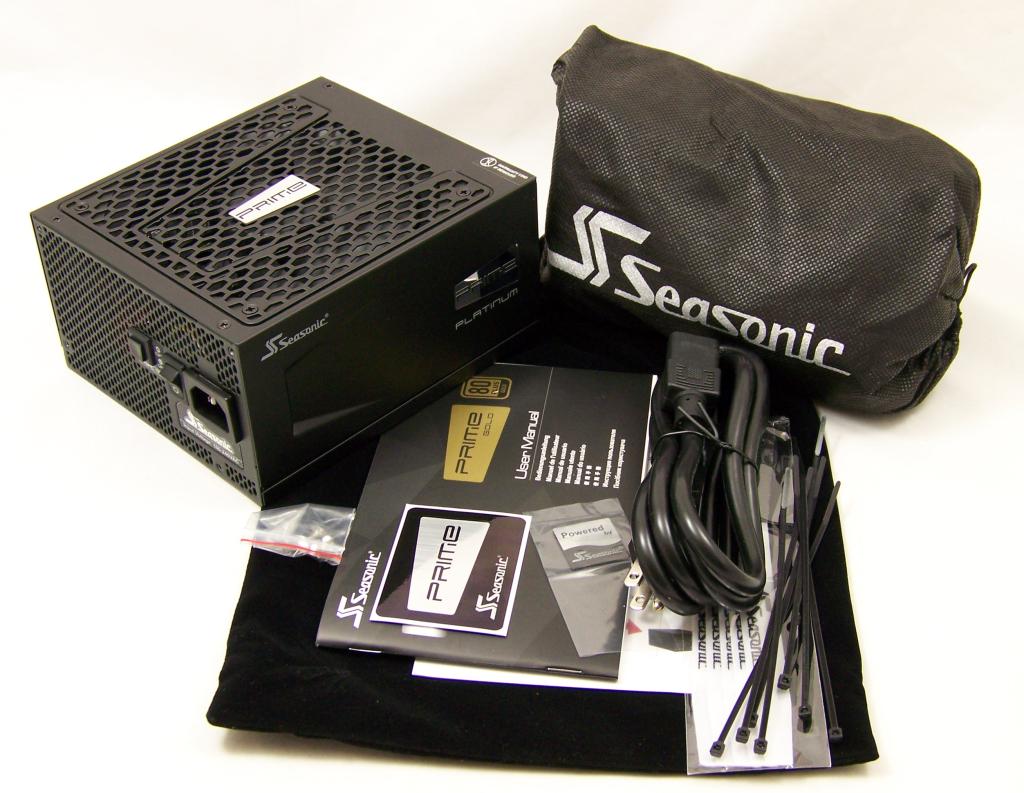 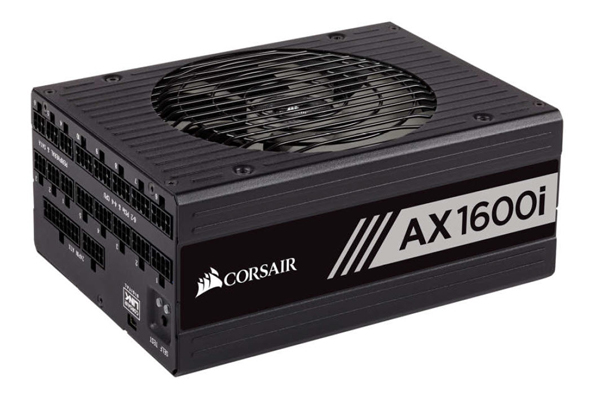