7-series based motherboards from ASUS

Stop in and see what ASUS has planned for the upcoming Z77 chipset launch!

This is going to be an interesting couple of months as the industry balances the move from Sandy Bridge to the 3rd Generation of Intel Core processor and the 7-series chipsets.  We have documented the rumored delays of the Ivy Bridge CPUs but it looks like Intel is moving ahead with the Z77/H77 chipset launch as planned.  This means that from now until whenever those new CPUs actually launch we will see quite a few new motherboards announced from the typical vendors claiming "future platform compatibility."

Recently we spent some time with our friends at ASUS to learn about its plans for the Z77 launch and I must say I came away quite impressed with the technology and features being integrated.  Today I am allowed to share with you some photos and basic information about the features being offered on the ASUS Z77 lineup, though without much hands-on time we are limited in what we can say. 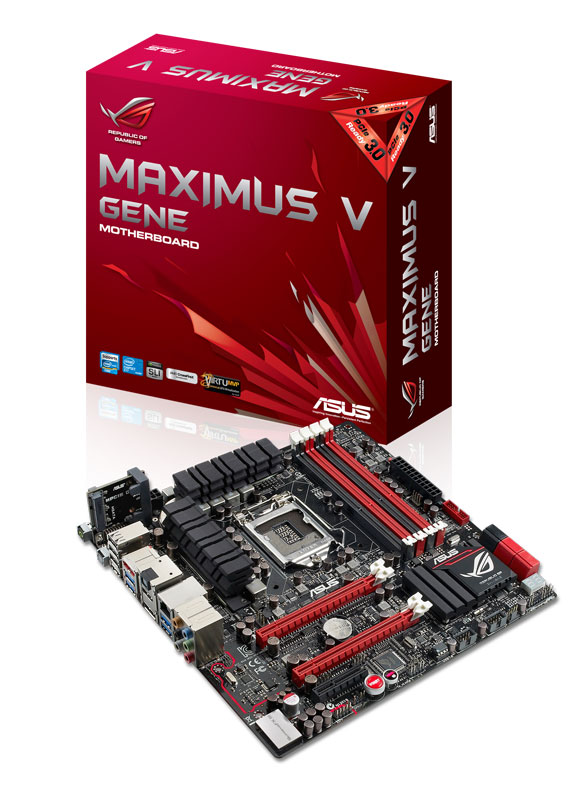 There are going to be options ranging from the high-end Maximus V Formula to the budget priced P8Z77-V to the ultra-niche with the mini-ITX P8Z77-I Deluxe.  Enjoy!

ASUS is using the Z77 launch as a chance to add some new features to the entire lineup of motherboards for the platform including WiFi and DIGI+ Power Control.

The latest technology for every desktop application

On display at the seminars were brand new motherboards from ASUS’ celebrated ROG brand, including the micro ATX Maximus V GENE, as well as the ruggedized SABERTOOTH Z77 from the ASUS TUF range. The Maximus V GENE comes with SupremeFX® III audio and network traffic management via Intel® Ethernet and ASUS GameFirst technology, affording smoother and more immersive gameplay. Meanwhile, the SABERTOOTH Z77 features Thermal Armor for precision cooling and unsurpassed reliability. In addition to these boards, the ASUS 7 Series caters to a wide range of computing segments, including workstation models with 4-way GeForce® SLI™ and dual Intel® Ethernet. Multimedia-focused and energy efficient mini-ITX and H77 motherboards further extend new ASUS and Intel® technologies into the home theater PC sector.

The world’s first Dual Intelligent Processors from ASUS pioneered two onboard chips, the TPU, or TurboV Processing Unit, and EPU, or Energy Processing Unit. These increase system performance while saving energy through optimized power management. Dual Intelligent Processors 3 builds on that foundation with new SMART DIGI+ Power Control, which consists of multiple digital voltage controllers that allow for ultra-precise tuning of CPU, iGPU and DRAM power delivery while working with the TPU to ramp up performance to full potential. 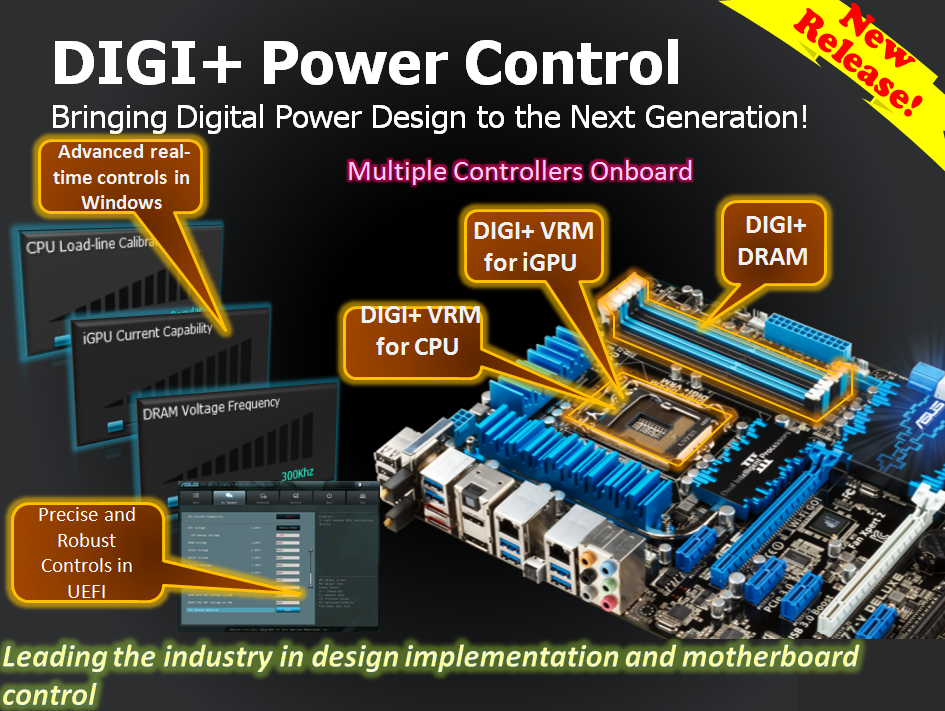 While increasing system performance and efficiency have always been mainstays of ASUS motherboard design, efforts have also gone into improving cooling with the introduction of hardware-based ASUS Fan Xpert 2, which brings thermal flexibility and response to levels unavailable anywhere else. The included Fan Auto Tuning Mode scans fans individually to detect their thermal properties through automatic speed sensing. Custom fan speeds can be adjusted automatically or manually with a single mouse click, achieving an optimal balance of cooling and low noise. Fan Xpert 2 also includes an RPM Fixed Mode for users who wish to reduce noise levels to near 0dB, with highly specific fan speed controls that react to actual system loads for more accurate response. 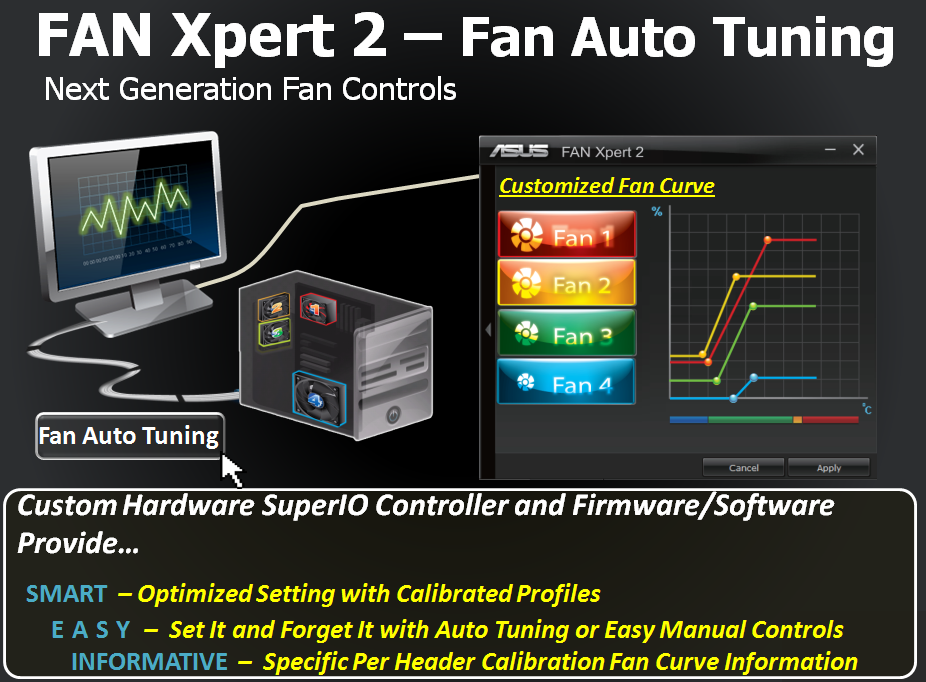 Recognizing the central role that convenience plays in emerging lifestyles as related to home computing, ASUS has used the seminars to introduce new Wi-Fi GO! technology, tailored to entertainment-minded consumers on the look for more seamless and smoother user experiences. Home entertainment becomes easier with Wi-Fi functions such as DLNA streaming, so users can enjoy content from a variety of devices. The Remote Desktop function provides access to the desktop with a tablet or smartphone acting as remote control, allowing greater convenience by creating a portable virtual desktop. Wi-Fi GO! can also convert PCs into routers, with all of these features fully integrated into a one-stop utility. 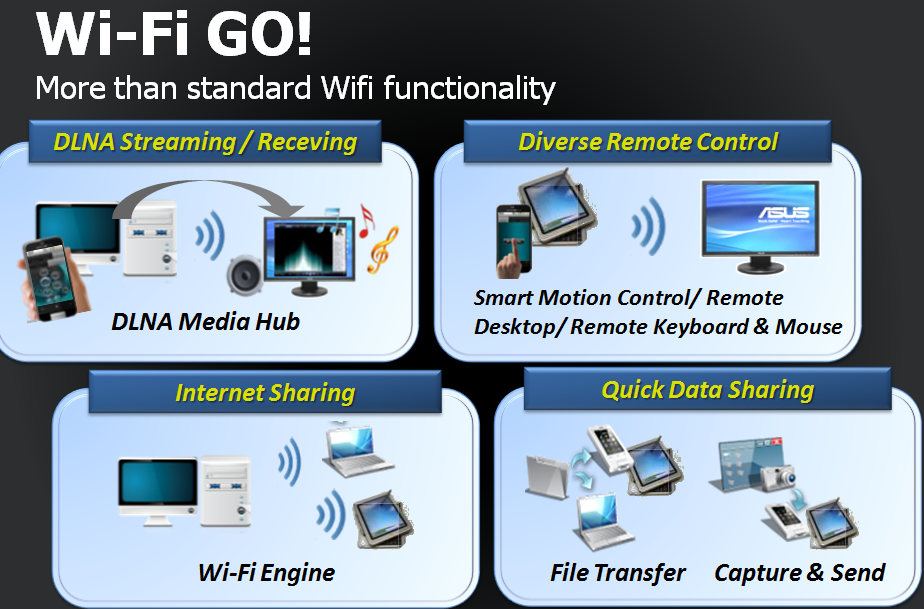 In addition to the exclusive ASUS features described above, ASUS 7 Series motherboards include Intel® Smart Response Technology, Intel® Smart Connect Technology, and Intel® Rapid Start Technology, while also natively supporting PCI Express 3.0. All combined and as shown in the seminars, these feature sets make them the most attractive motherboard options currently on the market.

There are other features that are going to be board specific that we will discuss as we go.

System on the cheap