Will it Strike Again?

﻿It can now be claimed that we are arguably in our 4th generation of Lightning products from MSI. It can also be claimed that the 3rd generation of products really put that brand on the mainstream map. The R6970 and N580GTX (and XE version) set new standards for enthusiast grade graphics cards. Outstanding construction, unique pcb design, high quality (and quantity) of components, and a good eye for overall price have all been hallmarks of these cards. These were honestly some of my favorite video cards of all time. Call me biased, but I think when looking through other reviews those writers felt much the same. MSI certainly hit a couple of homeruns with their three Lightning offerings of 2011.

Time does not stand still.  Resting on laurels is always the surest way to lose out to more aggressive competitors.  It is now 2012 and AMD has already launched the latest generation of HD 7000 chips, with the top end being the HD 7970.  This particular product was launched in late December, but cards were not available until January 9th of 2012.  We are now at the end of March where we see a decent volume of products on the shelves, as well as some of the first of the non-reference designs hitting the streets.  Currently Asus has its DirectCU II based 7970, but now we finally get to see the Lightning treatment.

MSI has not sat upon their laurels it seems.  They are taking an aggressive approach to the new Lightning series of cards, and they implement quite a few unique features that have not been seen on any other product before.  Now the question is did they pull it off?  Throwing more features at something does not necessarily equal success.  The increase in complexity of a design combined with other unknowns with the new features could make it a failure.  Just look at the R5870 Lightning for proof.  That particular card tread new ground, but did so in a way that did not adequately differentiate itself from reference HD 5870 designs.  So what is new and how does it run?  Let us dig in! 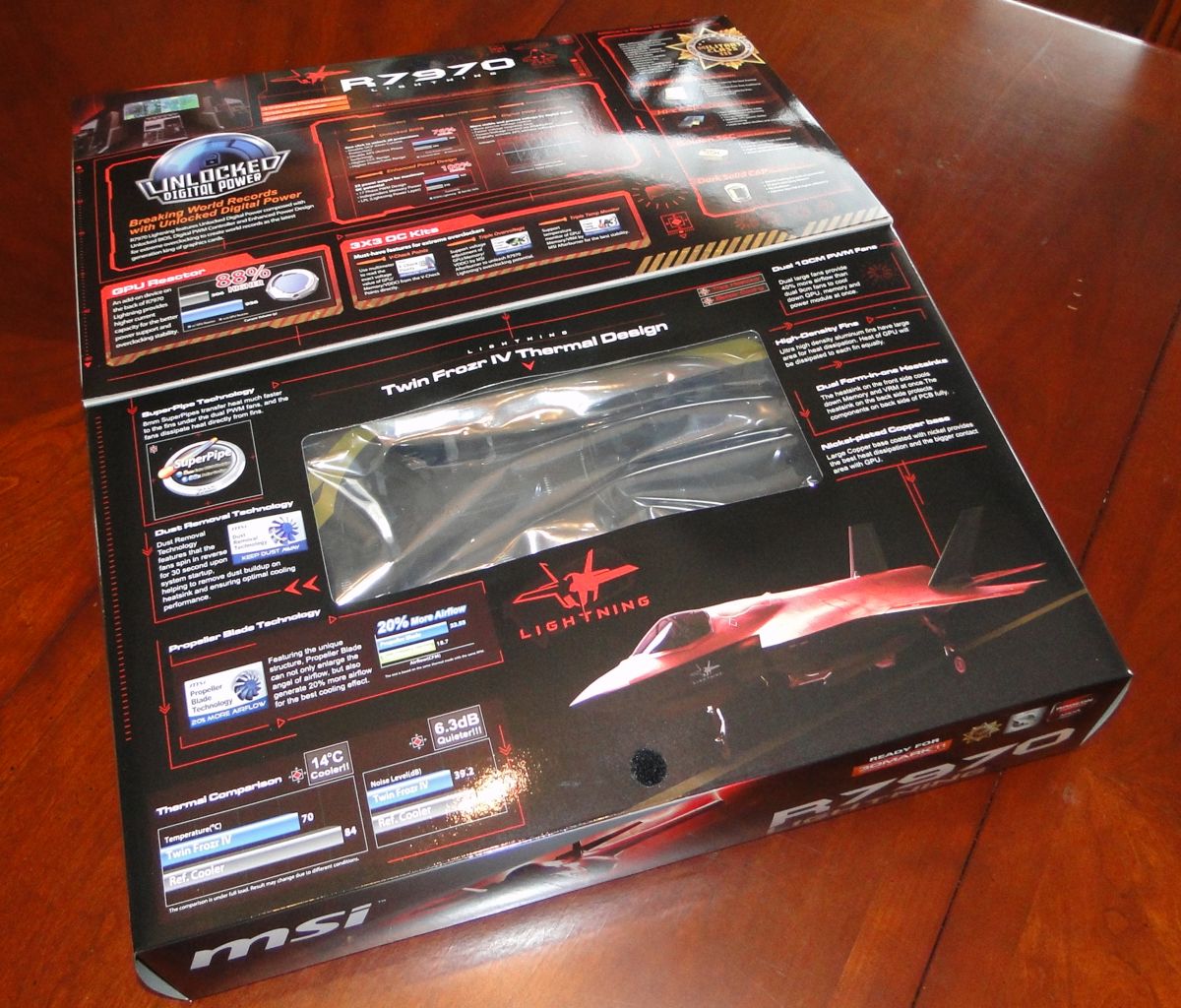 Packaging has always been a strong point of MSI.  Opening the cover details the many features that the Lightning series brings to the table.

The R7970 Lightning appears to be a ground-up redesign.  While it retains much of the physical appearance of the previous products, quite a few things have changed under the hood.  Considering that MSI has had specifications out on the HD 7970 since last year, and have been producing reference HD 7970 cards for some time, the 3+ month wait to release this particular card appears to be well spent. 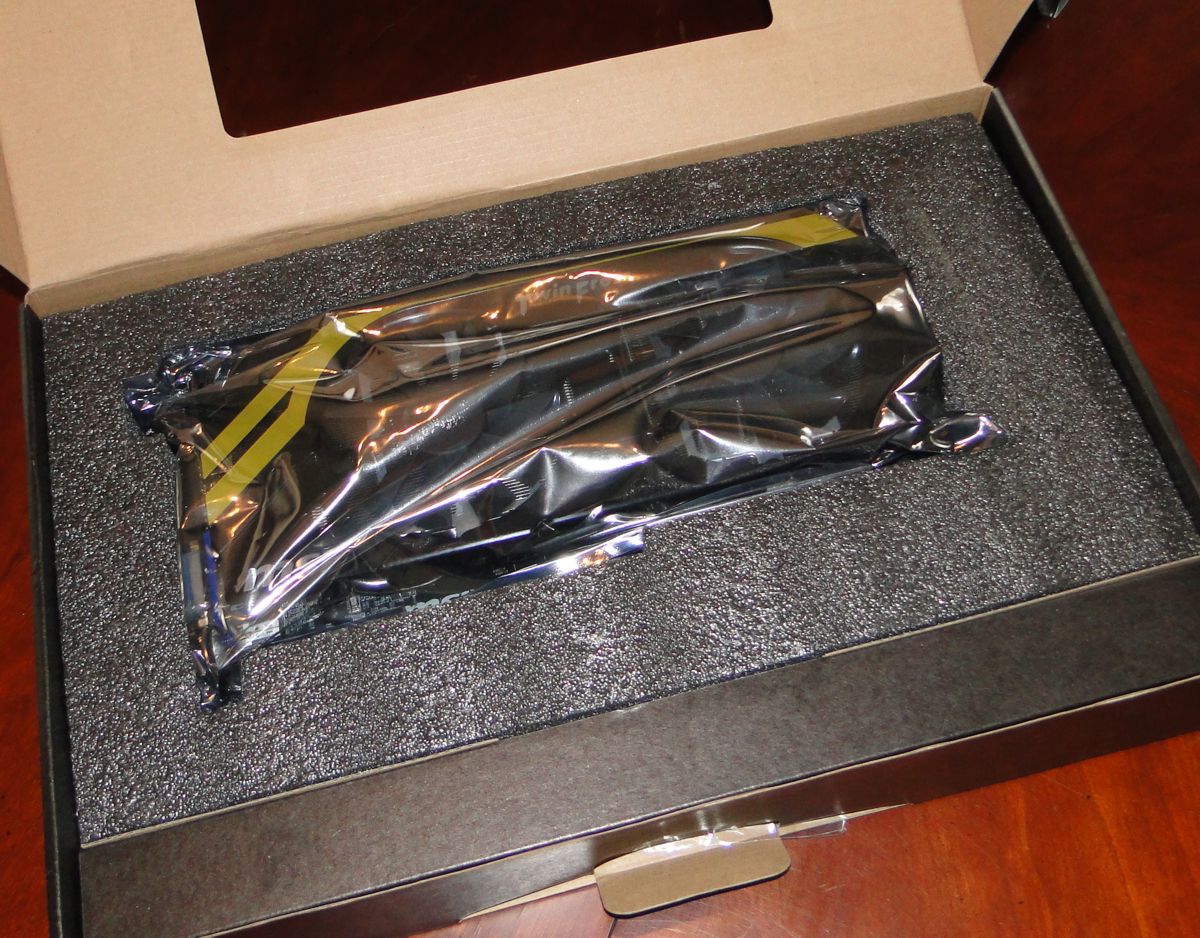 The card itself is well protected in its sleeve and surrounded by the standard sea of foam.

The board is obviously based on the HD 7970 GPU from AMD.  This unit features the new GCN architecture which radically changes the way that AMD processes graphics.  This architecture is much more flexible in terms of workloads than the previous VLIW-5 and VLIW-4 series were.  It also appears to be overall more efficient per clock than previous iterations.  AMD also continues to keep overall die sizes down as compared to the much larger products like NVIDIA’s Fermi.  The standard clock for a HD 7970 is 925 MHz, but the Lightning board takes that all the way up to 1070 MHz core.  It also overclocks the memory from 1375 MHz to 1400 MHz (from 5500 MHz to 5600 MHz effective).  This gives the card 268.8 GB/sec of bandwidth.  The board has two CrossFire connections, so it can have a maximum of four cards in CrossFire.

Games for Windows Vista: how the new brand & OS will change PC gaming