Twin Frozr IV, Power, and Display Options for the R7970

MSI is calling the new cooling solution the Twin Frozr 4. A few weeks back we interviewed Alex Chang of MSI about what changes we would expect to see with TF4. Now we finally get to see the finished product. The biggest change is the use of 2 x 10 cm fans instead of the previous 8 cm products. These fans are still the “propeller” style units we saw introduced with Twin Frozr 3. They are still PWM controlled and at idle run at about 30% speed. These are very quiet units, even at 70%+. They do get pretty audible at 100% fan rate, but unless a user is running this card in 110F weather and overclocked, it is unlikely to get to that speed by itself. The heatsink is still the large, aluminum finned unit with multiple heatpipes coming out. The 8 mm “super pipe” is still in attendance, but the other smaller heatpipes have gone from 5 mm up to 6 mm. At startup the fans blow backwards to remove dust that has built up in the aluminum fins. It does this for about 30 seconds at first boot, and it appears that it does help to remove dust fairly effectively 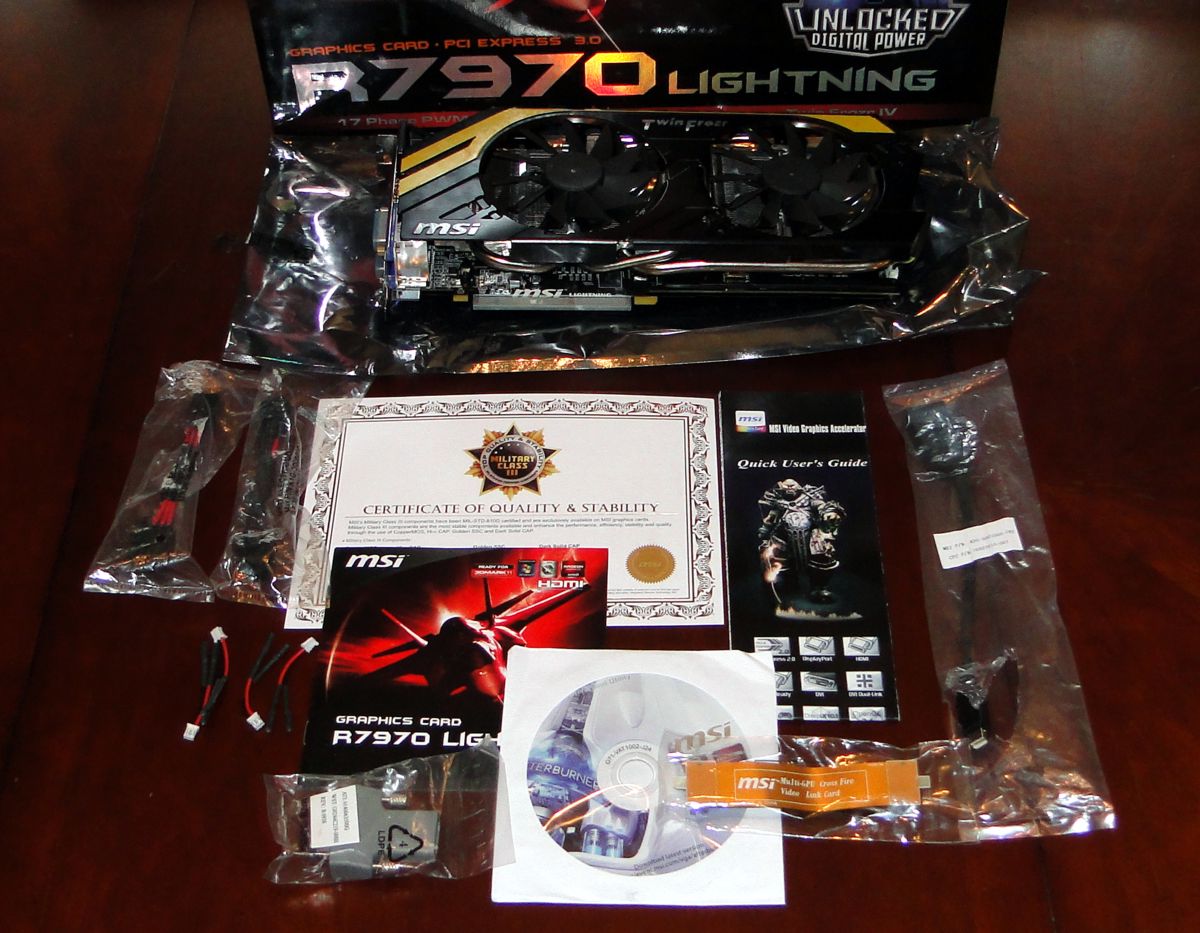 The bundle itself is pretty good with the CrossFire cable, the voltage monitor cables, the PCI-E power adapters, manuals, CDs, Lightning certificate of quality, DVI to HDMI adapter, and the mini-DP to DP adapter.

The design includes the “dual form-in-one” heatplates which cover the memory and other power components throughout the design. It also acts as a stiffener to stop the PCB from warping when installed in a case. MSI has also included a rear plate which again acts as a stiffener and protects the components on the back of the card.

Component choice is a significant part of what makes this a Lightning card. These fall under the “Military Class III” components. This means that the components are all very rugged and can handle a whole lot of wear and tear. Probably more so than is likely encountered in a PC case. There are some new and old components mixed in with this design. As in the previous Lightning series, it features the CopperMOS chips for power delivery, and this provides for lower overall working temperature and a higher current capacity. Also from previous boards are the Hi-C Caps (aka Tantalum Capacitors) which feature a longer lifespan and less leakage. The next two components are new for this generation. Golden Solid State Chokes make their first appearance with this card. These are gold plated SSCs, supposedly for better heat dispersion and anti-corrosion purposes. In theory solid ferrite chokes can oxidize over time, and potentially lose performance due to that. It also supposedly increases current handling by about 10%. The second new component is the Dark Solid Capacitor. These are aluminum core solid caps with a nickel-plated cover. This promises a longer lifespan as well as lower ESR (equivalent series resistance- lower temperature and a higher efficiency). With these parts this card promises to last far longer than the rest of the components of a system combined. Of interest is the lack of the previously featured “Proadlizer” chips. These apparently were EOL’d and are no longer available 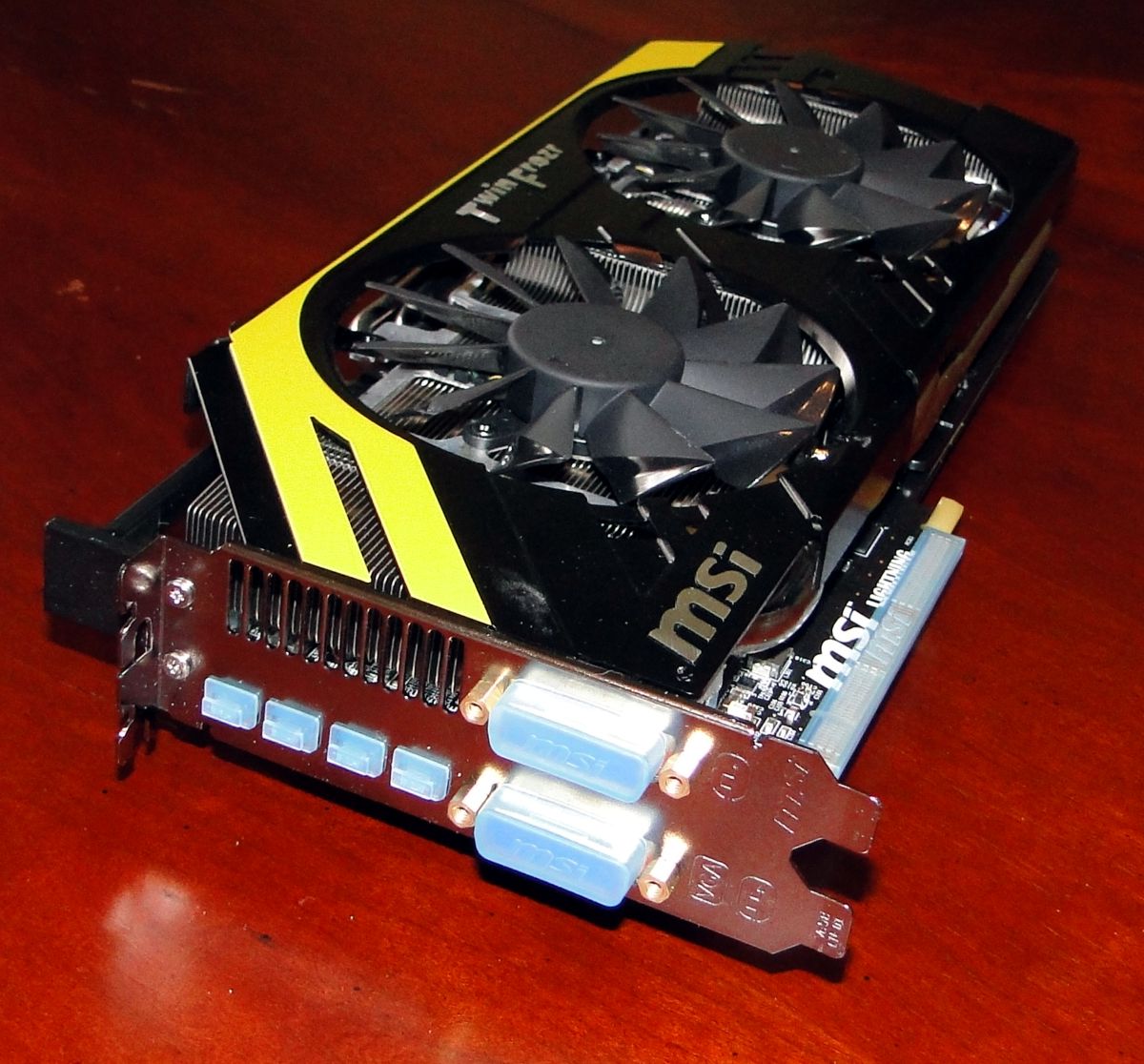 A good view of the outputs for this particular card.  Dual link DVI is so 2011…

The card is fed by 2 x 8 pin PCI-E power connections. This provides up to 300 watts of power for the card. Divvying up this power are a total of 14 phases for just the GPU, 2 phases for the memory, and one phase for the PCI-E/VDDCI connection. The memory phases are provided from the 2 x 8 pin connections, which apparently can be a lot more stable than the reference design which gets its power from the PCI-E/PEG slot. Each of these subsets of components can be adjusted in the Afterburner utility. The Lightning includes a digital PWM controller which allows for faster and more accurate switching and voltage control. There are two V-BIOS chips that can be selected via a toggle at the top of the card. The normal BIOS allows overclocking but does not unlock over current protection or disables active phase switching. The special “LN2” BIOS does in fact unlock OCP and disables active power phase switching. It also allows for a higher CCC range, as well as a higher PowerTune range. This *should* allow for higher overclocks, but the user runs the risk of burning up the chip. This should be used very carefully, and really it is provided for those who want to use LN2 cooling to achieve extreme overclocks. The design also features the “Lightning Power Layer” which provides another independent board layer to improve circuit design and lowers noise and interference.

The board is set up for some extreme monitoring. Not only are things like temperatures, load, and fan speed handled by the Afterburner utility, but there are available hardware points for more precise voltage monitoring. There are three connections that are built into the board that allows for external meters to be plugged directly into the board. This is for the LN2 overclocking group who need to see exactly what voltages the different components are running at 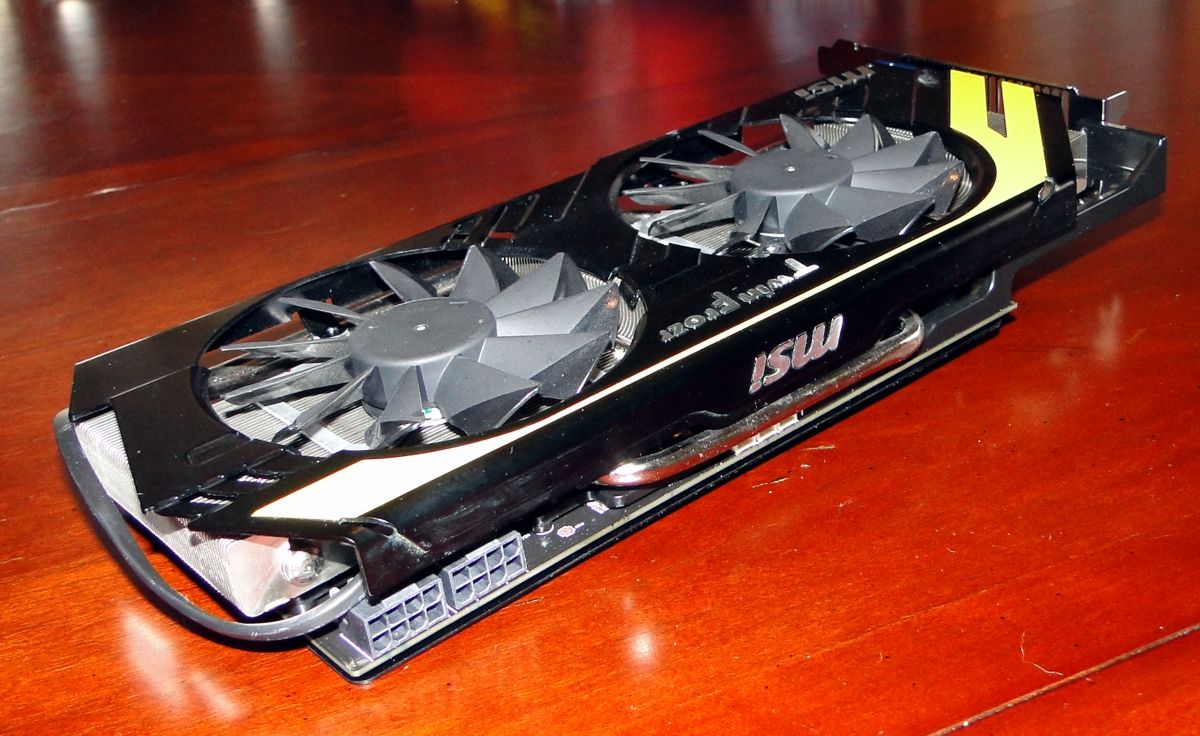 The view from the top is not nearly as exciting, but it gives and idea of the heatpipe placement.  2 x 8 pin power plugs are also nice to see.

Display support is an area that is good and bad. MSI includes two DVI ports as well as four Display Ports. This allows a single card to drive 6 monitors at once. There is a price to pay though. Unlike the Asus DirectCU II cards which feature a similar setup, MSI does not allow a switchable configuration. With the Asus boards a dual link DVI port shares resources with one of the Display Ports. So when the user needs to actually use a dual link capable display over DVI, they could flip a switch on the board and enable that functionality. This particular functionality is notably absent with the MSI board. Both DVI ports are limited to single link resolutions, which only go up to 1920×1200. For those with a 2560×1600 monitor that only uses DVI, then they need to buy a separate powered Display Port to DVI unit (which ranges in cost from $75 to $200). The more available “Active” DP to DVI plugs are only good for single link resolutions. If a user has 2560×1600 displays with native Display Port connectivity, then they will be able to game at that full resolution without the use of a separate adapter.

The final new feature is that of the GPU Reactor. This is a separate PCB from the video card, and it plugs into the back of the unit. It features an extra 8 tantalum capacitors which almost doubles Current Volume, all the while lowering ripple. It also features a few blue LEDs onboard, so when it is installed with the GPU Reactor cap in place, it has a nice blue glow emanating from it. This does free up some space from the board, and it should provide the advantages stated above. Whether or not it really will send the GPU to the next level is debatable.