One of the most interesting, and likely to be the most controversial, new features on the GeForce GTX 680 and the Kepler GPU is called GPU Boost.  You should think of GPU Boost as the GPU equivalent of Intel’s Turbo Boost technology as it allows the clock speeds of the GTX 680 to increase when there is thermal headroom for it.

Before going over what GPU Boost does, it is crucial to have a background on the clock selection process on GPUs today.  In general, clocks of GPUs have been set to the worst case scenario so that a vendor or manufacturer could guarantee stability of the part in all games.  If one game or application (like 3DMark 11 pictured here) uses 160 watts of power at 1000 MHz (and that was generally considered the worst case by the GPU designer) then the clock would be set there.

Last year both AMD and NVIDIA started down the process of changing things by eliminating applications like Furmark and OCCT from the mix by limiting the amount of power that the GPU could draw.  AMD did this in hardware and NVIDIA in a driver hack, but both vendors saw the benefit of removing the outside case of Furmark from their decision process when setting clock speeds.

Games use less power than Furmark, OCCT and even 3DMark 11, and some games use much less power than others.  The above image shows a theoretical clock speed 1.0 GHz, a voltage of 1.0v and power consumption numbers for three applications – 3DM11, Crysis 2 and Battlefield 3.  Using 160 watts as the target power consumption for a specific card, these would be the clock speeds set by NVIDIA without GPU Boost technology.

With a clock speed of 1.05 GHz and a voltage of 1.1v, you can see that power consumption changes (as would performance).  3DMark 11 is now outside the 160 watt limit they wanted to set though Crysis 2 and BF3 are still within safe ranges.

The goal of GPU Boost is to allow the clock speed of the GPU to scale between clock speeds based on the application being used, stay within the power consumption tolerance specified by the manufacturer, and run stable without user intervention.

To accomplish this, the Kepler GPU and graphics cards need to be able to monitor power consumption, temperatures, and performance utilizations.  Then, to use that data to alter clock speeds and voltages on the fly.  NVIDIA is keeping very quiet about the specific algorithm and work here but it should be pretty simple to understand for users; if you have thermal headroom and the GPU is nearly completely utilized, then increase clock and voltage until you are nearly at the limits specified.

This all occurs fairly quickly with an instantaneous polling time and a 100ms response time on the clocks and voltages.

Here is a different view of the GPU Boost feature.  With the Y axis being power and the X axis a series of unnamed games, you can see that a single game that utilizes the GPU nearly completely and consumes the most power typically sets the base clock speed for GPUs.  However, all the way on the left you’ll see another game that falls well under the power limits and could be running at higher speeds.

Each of these titles will have varying amounts of power windows to expand into but the goal of GPU Boost is to get as close to the thermal limits of the card as possible to enable the best GPU performance.

With the Y axis now shifted to clock speed rather than power, you can see that the GPU clock will increase some amount over the base clock used on that game on the far right; a capability possible because of GPU Boost’s ability to increase clocks on the fly. 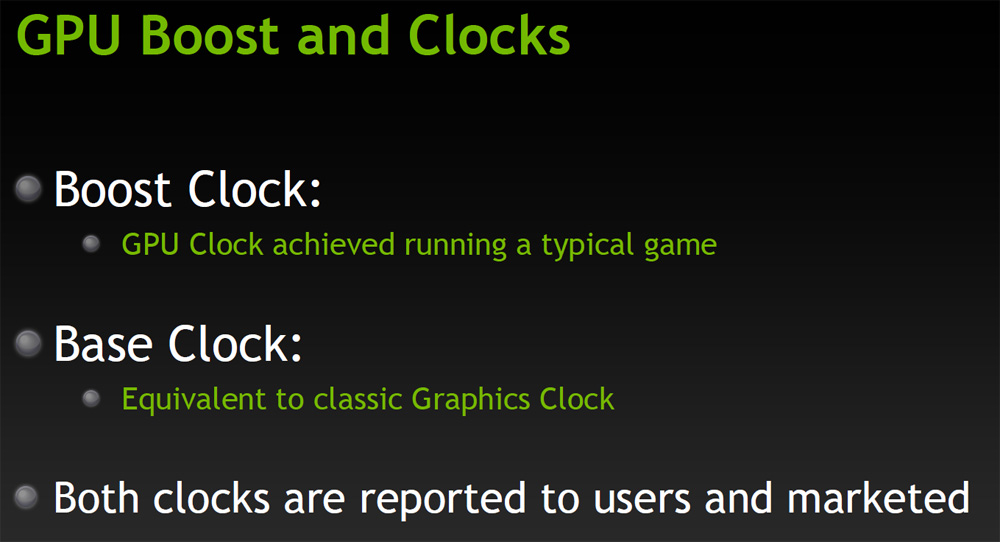 There are lots of questions that go along with this new technology NVIDIA is introducing, including whether users have the ability to disable the feature.  That is something that NVIDIA has decided to not allow simply stating that "this is way the card works now."  The obvious fear is that reviewers and gamers would turn the technology off to get an "apples to apples" comparison of the GTX 680 to the HD 7970.  NVIDIA’s stance is that GPU Boost is a part of the GPU and should be included anyway.  We are going to keep looking for a way to measure the actual benefits of GPU Boost on our own; although, it does take some time.

Another question you surely have is "how much with the clock boost?"  The GTX 680 will be marketed with two clock speeds: the "base clock" and the "boost clock" with the base clock being exactly what you are used to.  The base clock is the speed at which the GPU will run in the worst case scenario, a game or application which utilizes the GPU to its fullest.  The boost clock is the GPU clock while running at "typical game" – though what a typical game is isn’t really described.  Because there is such a wide array of PC games on the market, and that clock can change even from scene to scene in the same game, it will be hard to say with any kind of certainty what speed you will be running at without looking for yourself.

This also means that performance will vary in several ways from user to user.  If your GPU is in an open test bed versus a poorly cooled chassis, for example, you could have your GPU clock swing one way or the other.  Also, due to the tolerances with GPUs from the factory, two different GTX 680s could perform differently in the exact same environment.  While we have only been able to test a single GPU ourselves, and thus can’t really judge the accuracy of the statement, NVIDIA is claiming there will only be a 1-2% variation from user to user.  Will consumers complain if their specific card runs slower than their friends?  We aren’t sure yet but I know we will be finding out very soon.

More examples of NVIDIA’s GPU Boost at work are available on our overclocking page.