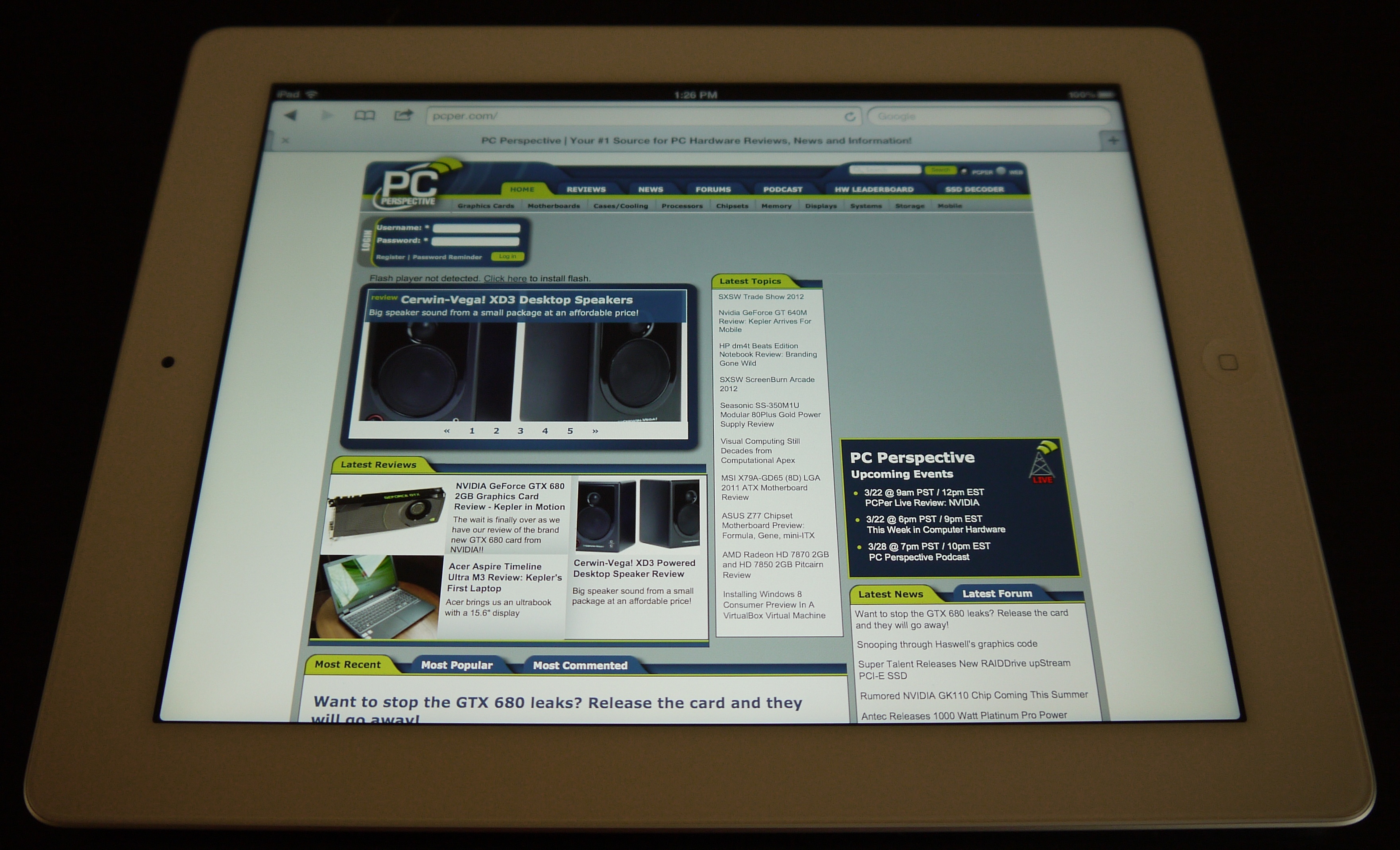 You’ll find a lot of pre-installed software on the iPad 3. Most of it is extremely mundane functionally that is also found on Android tablets, such as a calendar, contacts, a YouTube app, a maps app, etc. While basic functionally between the two operating systems is similar, there are some areas where Apple has managed a notable improvement – and they’re not all where you’d expect.

The YouTube app, for example, has always been finicky on Android tablets. It crashes rather often and the interface, though it looks good and is functional, has always given me its fair share of hiccups. I’ve had problems with the app not closing correctly, leaving a video playing in the background when the app is no longer shown as running. I’ve also had problems with videos mysteriously stopping mid-stream or crashing altogether.

Apple’s YouTube app, in contrast, seems entirely stable and always plays videos without hiccup or hesitation. Some portions of the interface don’t work as well as they do on Android, but I’ll gladly take a stable app over one with a more convenient comment interface.

This ends up being a good metaphor for software in general. Both iOS and Android have similar tablet functionality in stock guise, but most of the iOS apps are more stable and feel quicker. Mobile Safari blows away the default Android browser. The App Store and iTunes stomp all over the Android Market – or, as it’s now called, Google Play, and Android has no competent answer to Apple’s Game Center, which is absolutely awesome for folks who want to get into tablet gaming.

One thing you won’t find, however, is Siri. The personal assistant that debuted with the iPhone 4S is nowhere to be found on the new iPad. Why? Apple claims that the way people use tablets makes Siri a non-issue. I suppose they have a point, but it’s also true that it wouldn’t put Apple out to include Siri and let users choose for themselves.

Though I prefer iOS overall, there are some areas where Android is superior. Multi-tasking is better on Ice Cream Sandwich thanks to a thumbnail app view. While you can access a multi-tasking menu with multi-touch gestures on iOS, you are only given an icon view, and there are limits on how many icons can be displayed. I also prefer how Android handles notifications. It’s still not elegant, but it’s at least more informative. 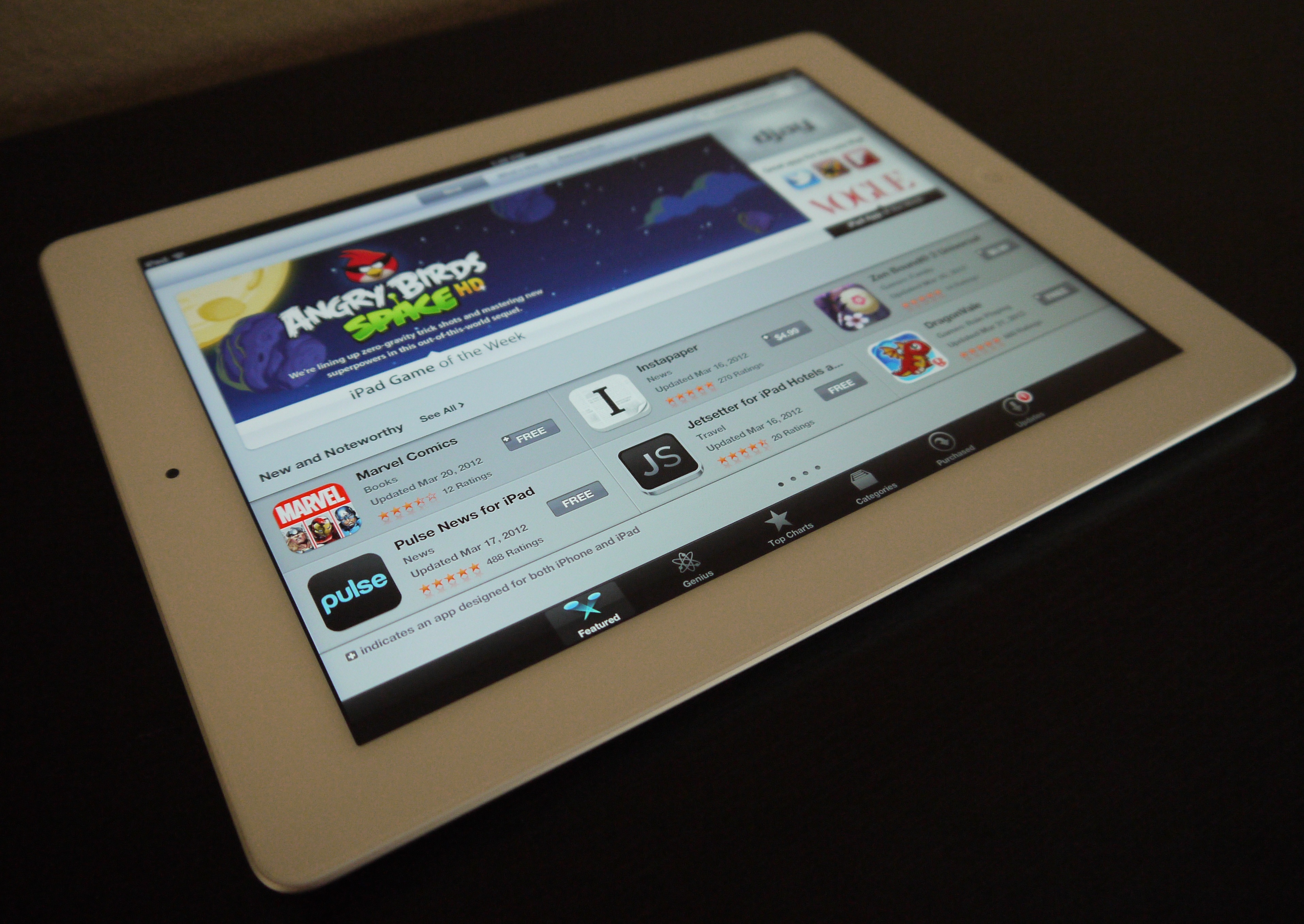 Of course, the downside to the iPad 3 is that you have to buy in to Apple’s closed ecosystem. Customization is so limited as to to be nearly non-existent and jailbreaking is heavily discouraged. In exchange, Apple offers a better app experience and the promise of future OS updates. This approach is clearly superior for most consumers, but it may not be for you, in which case you should go buy a Transformer Prime (or wait for the high-resolution version).

Rumors prior to the release of the iPad 3 suggested that we would see a quad-core processor. We didn’t receive it. Instead we received a quad core graphics component, by which Apple means they’ve doubled the resources in comparison to the iPad 2.

This means the new iPad should have outstanding graphics performance, and Apple even went so far as it suggest that the A5X is four times quicker than Nvidia’s Tegra 3. That’s a bold claim, though it’s common for companies talking about graphics performance to go a bit overboard when comparing their products to competitors.

Benchmarking the iPad presents some challenges. Obviously, many of the benchmarks that run on Android will not run on iOS. This limits the ways I can compare performance to the competition. There are, however, a handful of cross-platform benchmarks. Let’s first dive in to the browser benchmarks. 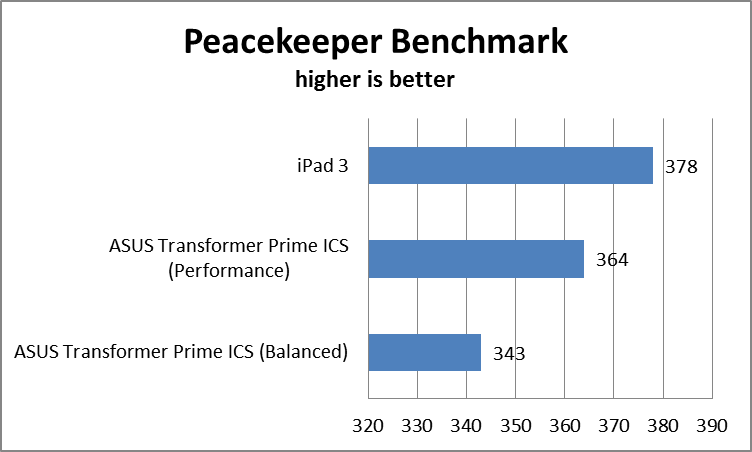 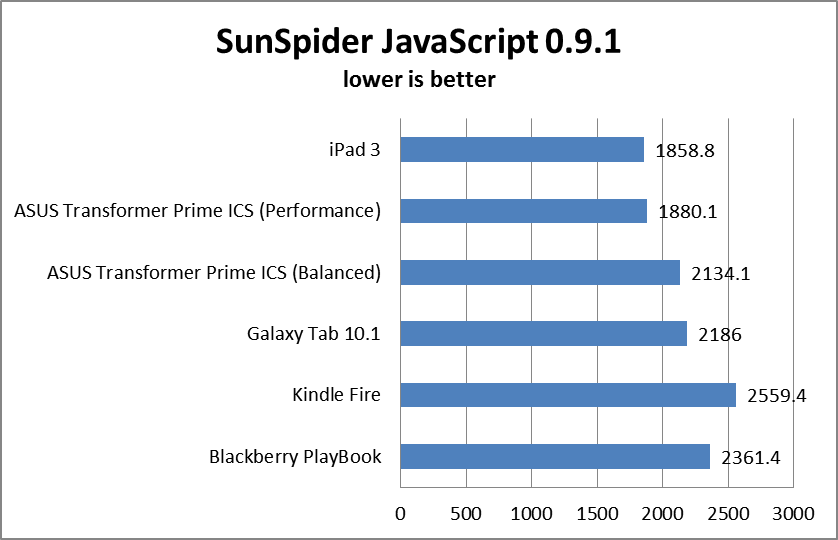 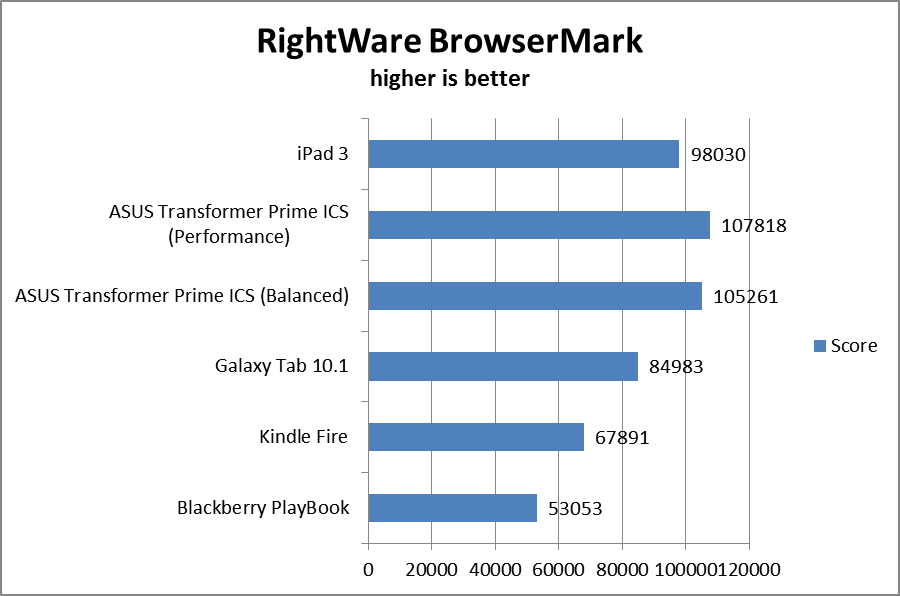 The browser benchmarks tend to rely on CPU performance.Tegra 3 has an on-paper advantage thanks to its four cores and base clock speed of 1.3 GHz. Apple’s A5X retains a clock speed of 1 GHz and has just two cores.

Despite this, the benchmarks are about tied. Apple’s tablet wins in Peacekeeper, is tied with the Tegra 3 powered Prime in SunSpider, and loses in BrowserMark. Both the Tegra 3 and the A5X are faster than other currently available hardware – and by no small margin.

Of course, part of the story is the browser itself, which probably explains why the new iPad does so well despite theoretically slower hardware. Safari for iOS is now a great browser (as a MacBook owner, I can only sit by and stare enviously at its performance), while the default browser for the Transformer Prime is, well – let’s just say it could use improvement.

Now let’s have a look at Geekbench, a cross-platform general performance benchmark. 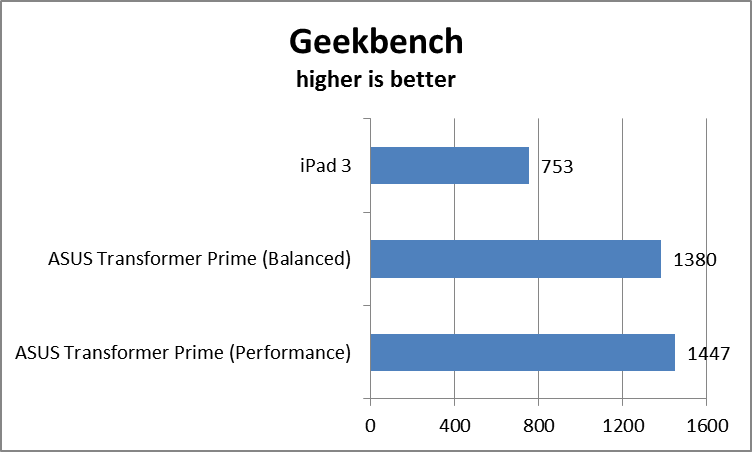 The Tegra 3 in the Prime has a huge advantage here, courtesy of its four fast cores. Geekbench seems to have no issue engaging them fully, and as a result Tegra 3 leaves the A5X in the dust. It’s a shame that typical Android apps seem to do a poor job of addressing all four cores because it’s clear that apps which do it well could be extremely quick.

Now it’s time to investigate Apple’s claims about graphics performance. The decision to drastically improve GPU power while leaving the CPU the same undoubtedly has something to do with the improved resolution. But are the claims that the A5X is four times as fast as Nvidia’s Tegra 3 really true? Let’s find out. 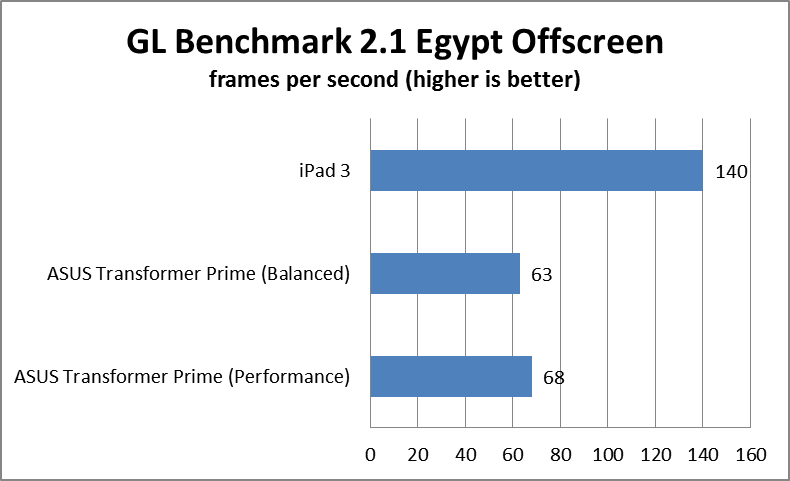 The offscreen test displays the raw difference between the two by rendering the Egypt benchmark in the background using a fixed resolution. While the A5X is not four times as quick as Tegra 3, it is over twice as fast, which is a substantial difference.

The retina display also has four times the number of pixels, however- which means the new iPad could potentially offer worse real-world performance despite the greater horsepower. To test this I also ran the onscreen test. This is benchmark is Vsync limited at 60 frames per second, and the iPad 3 ran the entire benchmark at that limit. The Prime also hit that limit more often than not but there were moments where it was a few FPS shy. 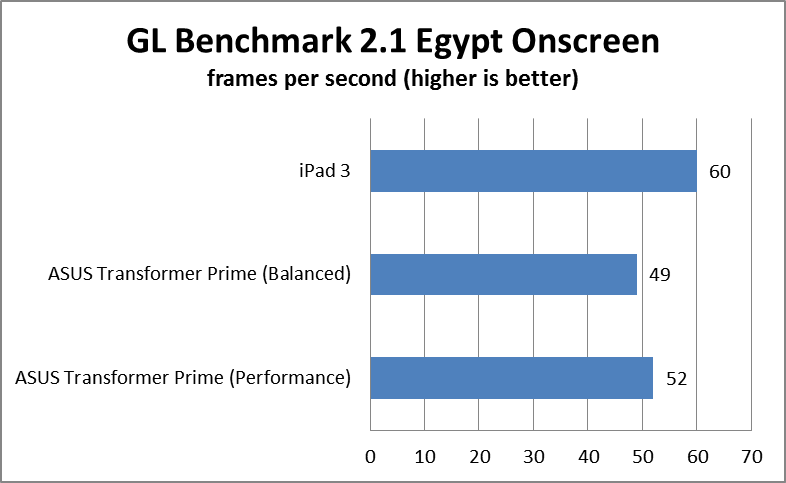 Overall, it appears that Apple is not wrong to flaunt its graphics dominance. There are even some benchmarks where the the A5X actually does offer even more than four times the performance of Tegra 3, but they are triangle and fill-rate tests rather than rendering of real 3D scenes.

It’s clear that a design decision was made early in this tablet’s life. An absurdly high display resolution was desired, and that meant a substantial upgrade to the GPU was also necessary. Doing this undoubtedly kicked up power consumption, however, which means that there wasn’t any room left for improving the processor’s clock speed or adding more cores.

Was this the right decision? I believe so. A tablet is an ecosystem – everything is connected. Apple could have included a faster processor, but that would have meant sacrificing battery life or the GPU. And if the GPU wasn’t made quicker, doubling the pixel count would have been unwise. Given the choice between a faster CPU and the old display resolution or a faster GPU and the new display resolution, I would choose the second option every time. 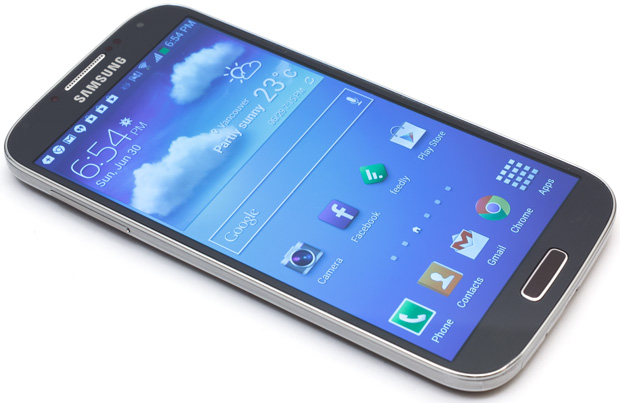