The build up for Bulldozer was tremendous. There was a lot of excitement for the architecture from enthusiasts and journalists alike. Here was an architecture that was unique in how it handled multi-threading, and seemingly promised a great leap forward in performance as compared to previous generation parts. The idea of two integer execution units sharing a single front end with a flexible and wide SSE/AVX/FP unit backing them up seemed like a recipe for success. Unfortunately, the actual implementation did not live up to expectations. Bulldozer was heavily delayed due to both process issues and design issues which resulted in poor performance. I had heard rumors from partners that these products could not even surpass last generation’s 45 nm parts well before the release. Once we finally got to see these parts in action, the rumors were confirmed, and AMD had underperforming parts based on this new architecture. 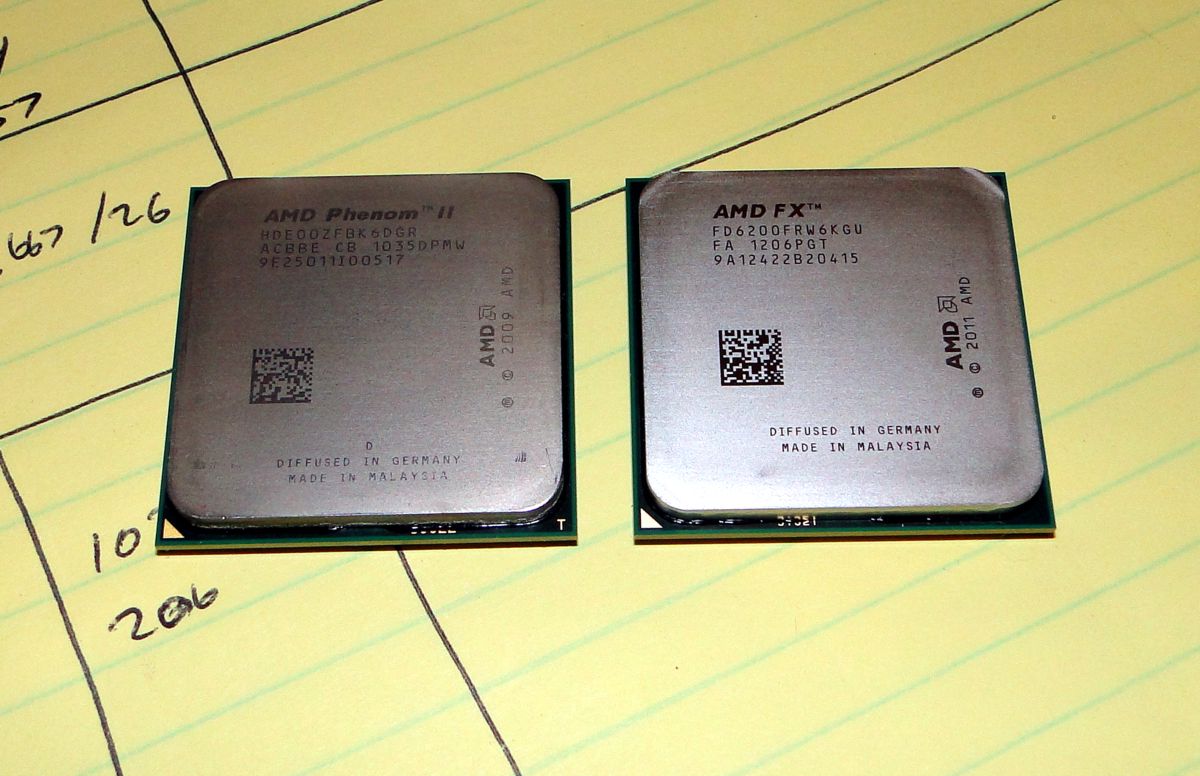 The two chips are nearly identical, but that is not surprising as they fit in the same socket.

The idea of the FX-6200 was initially an interesting one. Here was a 3 module/6 core part that was clocked 200 MHz faster than the high end FX-8150. Expectations were that this particular part would show some real improvements in single threaded applications due to its aggressive 4.1 GHz Turbo speed, and being able to handle multi-threaded applications up to 6 threads much faster than the FX-8150. With at least one module disabled, power and thermals should be improved over those other parts. Well, it seems that these ideas were pretty wrong. Performance did not see a jump, thermals remained the same at 125 watts, and the part just is not terribly compelling from a price/performance standpoint. I was honestly disappointed. I thought that this particular part would actually deliver on the promise of the Bulldozer architecture. I also thought that this would be a minor revision of Bulldozer that would show a nice uptick in performance and power. This is obviously not the case.

Now, am I saying that this part is not worth a user’s time? Well, that is debatable. AMD is winding down production on 45 nm parts, and there are fewer and fewer of these CPUs available as time goes by. The 45 nm Athlon II processors are essentially all gone except for a few models out in the channel. AMD has seemingly stopped all orders on the Phenom II X6 processors, and only the 1045 looks to be currently available. The Phenom II X4 parts are well represented and probably could be viewed as the best bang for the buck from AMD when considering performance, power, and capabilities. But as production of those parts winds down, we are left with the latest 32 nm products from AMD. For $169 the FX-6200 is not a bad part, but neither is it compelling. It can overclock, but performance is not all that much improved over the X6 1100T. Let us not mention that the X6 1100T overclocked to speeds ranging from 3.8 GHz to 4.0 GHz simply runs away from the FX-6200. Oh wait, I just mentioned that.

If I were looking for a processor that could be a fun project in the $160 range, then the FX-6200 is in the running. Being fully unlocked it does make for some easy and fun overclocking. It is also $50 less expensive than the i5 2500K, Intel’s cheapest fully unlocked processor. Combined with the savings that user’s typically find with AMD based motherboards vs. Intel’s, it can mean an extra $100 to spend on other components that could significantly improve a user’s experience without sacrificing features on the motherboard side.

Only when we get to the back do we see the extra pins on the AM3+ part (right).

The chip can easily overclock. It is just unfortunate that even when overclocked it barely gets past the performance of many current processors at stock speeds. Still, free performance is free. It is just an interesting part, but not always in a good way.

I do not hate this processor. Neither do I love it though. The Bulldozer concept looked great on paper. Implementing it is another story altogether. A popular theory behind why the processor acts as it does is that AMD simply does not have the manpower to hand tune large portions of the chip. There is extensive use of automatic place and route of transistors on the software side, but I have heard it said that this results in a design that is about 20% slower and about 20% larger than a largely hand tuned design. When we start thinking of these numbers, we can look at the size of Bulldozer cores vs. that of the Intel i7/i5 series of parts. The Intel parts are smaller and have a much higher IPC, yet are still clocked aggressively to be the fastest performers on the block.

Will Trinity and Vishera fix this? I guess that depends on the definition of “fix”. I think that these upcoming products based on the Piledriver core will in fact improve the architecture and some of the performance issues that we saw with Bulldozer. There should be a lot more hand tuning going on with these designs, and I believe a lot of work will go into improving cache latencies, increasing L1 data cache sizes, and increasing the throughput of the decoders on each module. Will this make the Piledriver as fast (or at least competitive) as the upcoming Intel Ivy Bridge processors? Keep dreaming. I believe we will see a performance jump much like we saw with the original Phenom to the Phenom II. It will make it a more competitive part, but at least with Trinity AMD will be pushing the graphics portion more than the CPU. It will be better, but it will not match Intel’s Ivy Bridge in CPU performance.

So in the end is the FX-6200 worth it? Yes and no. It fits the price/performance envelope for a product in its category. It overclocks easily. It is still a 3.8 GHz product that has fair performance across the board. It does not abduct your family or set your house on fire. It just is simply not the budget performer that we were expecting or hoping for. Better luck next time.