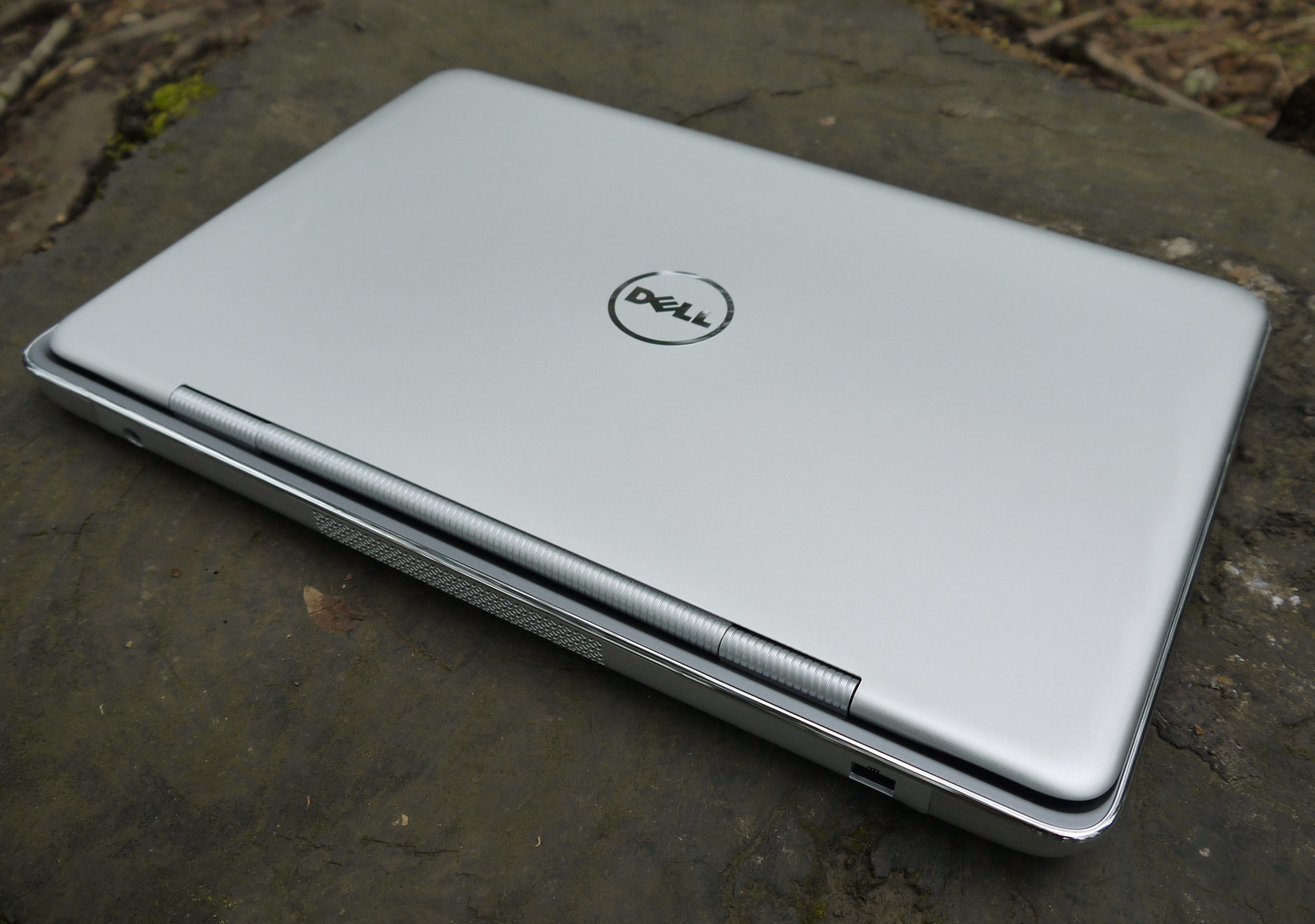 Now it’s time to tackle the GT 525M. This is not a particularly common GPU. You’ll find it in just a handful of laptops including the Dell XPS 15 and some Toshiba Satellite models.

Nvidia’s branding of this part suggests that it is a close sibling of the GT 520M, but specs tell us differently. This GPU has 96 CUDA cores, which is the same as the GT 540M. They run at 600 MHz, which is just 72 MHz below the 540M. Our review unit paired this GPU with 2GB of DDR3 memory.

Let’s see how it stacks up in 3DMark. 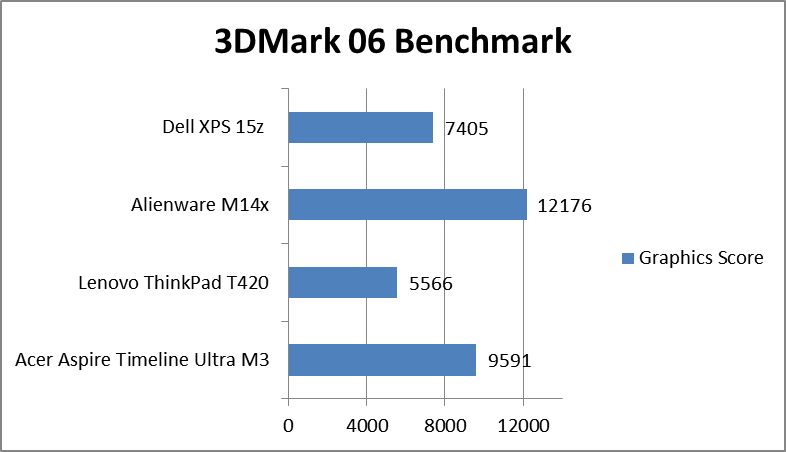 In the aging 3DMark 06 benchmark the GT 525M appears strong but not exceptional. It beats the Lenovo ThinkPad T420 handily but comes up well short of the newer Kepler-based GT 640M. Alienware’s M14X, with its GT 555M, runs away with the crown. 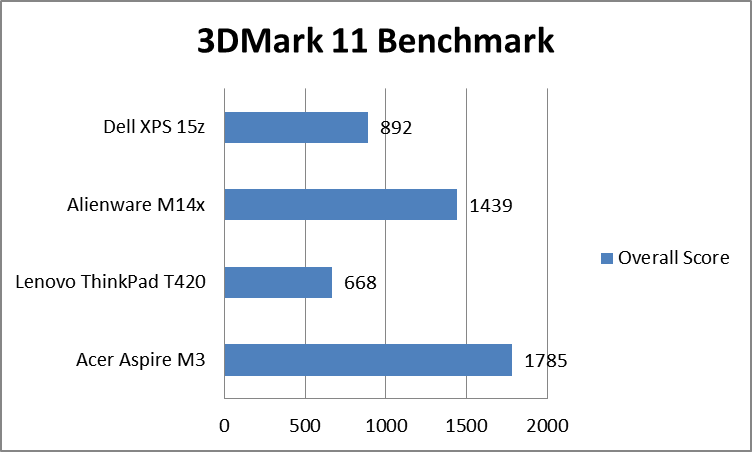 The performance story changes quite a bit in this benchmark, but not for the Dell. The main difference is the Acer Aspire M3’s sudden surge into the lead. This can be explained by the new architecture of its GT 640M GPU, which is tuned for the challenges of modern games.

So far our information seems to indicate that the XPS 15z is capable, but just barely. Let’s see how it handles real-world games.

We always start this section with Dawn of War 2: Retribution. This older strategy title often ends up CPU bound. This gives some hope to the XPS 15z. 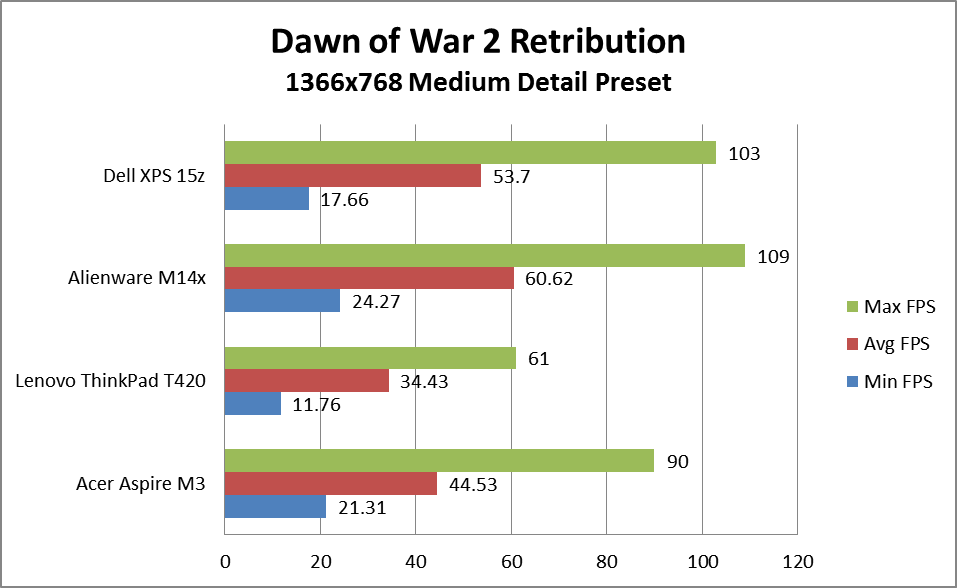 Yep – the fast Core i7 comes to save the day, providing overall benchmark results that are nearly on par with the Alienware M14x. If you like to play games that are known to be CPU bound, like many strategy and some MMO titles, you could find yourself just as well served by this laptop as one that has a faster GPU – provided you reduce the game’s resolution from 1080p.

Now let’s try Just Cause 2, a much more GPU intensive game, but one that is a couple years old. Can the XPS 15z handle it? 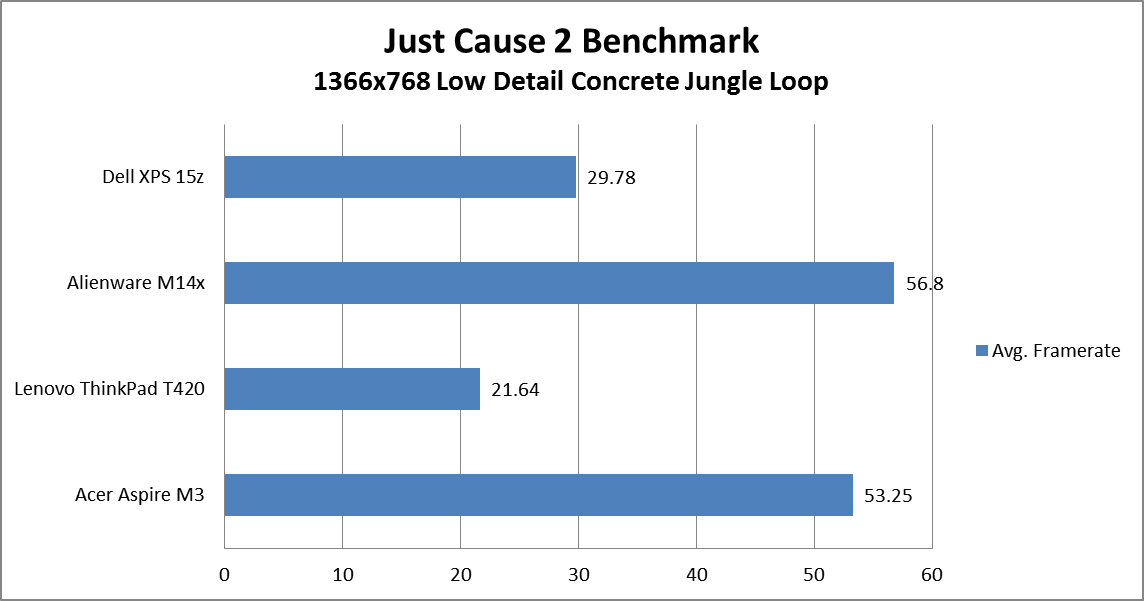 Well…kinda. The Concrete Jungle loop we use to test Just Cause 2 is demanding, and in actual gameplay the frame-rate is usually a tad higher than the average found in our testing. Most gamers will find the experience tolerable, but it’s adequate at best and a bit jerky at worst.

Finally, let’s have a look at Battlefield 3, one of the most demanding games you can buy today. 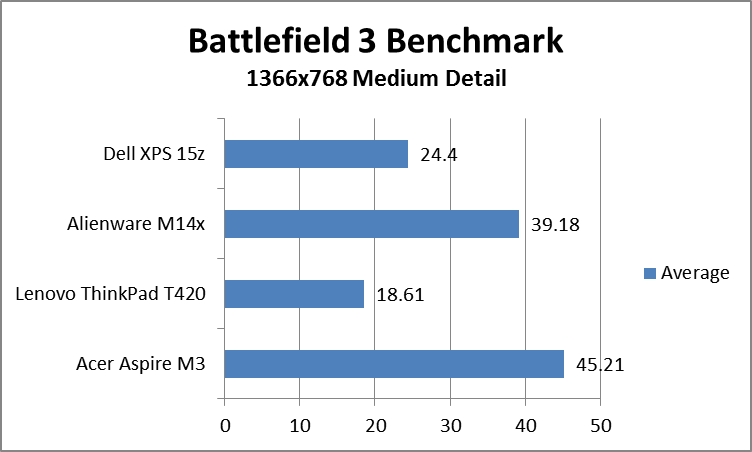 Here we see the XPS 15z falter. The gaming experience is playable at these settings, but certainly not enjoyable. I encourage gamers who want decent gaming performance in a thin laptop to wait until the new Kepler-based GPUs become widely available. Or you could go with the HP Envy 15, which comes standard with a Radeon HD7690M.

We don’t normally run 1080p gaming benchmarks because they simply aren’t relevant, but in those rare cases where we receive a 1080p capable laptop we do test its gaming performance at its native resolution. Let’s briefly look at what happens when you pump up the pixels.

For purposes of this section of the review we will be using different laptops for comparison, as the ones used in previous benchmarks are not capable of 1080p. Instead, we will be using the ASUS G74, ASUS N55 and Alienware M17x. 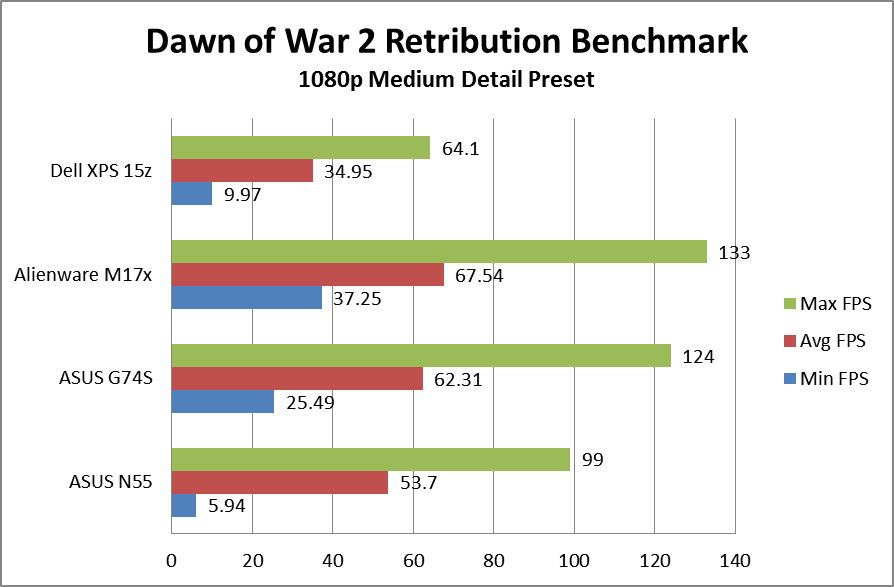 Cranking the resolution puts a big dent in the framerate of this game, but it remains playable. There are hiccups from time to time, and they are noticeable. But I think most gamers would rather play this title at 1080p/35FPS than at 1366×768/55FPS. 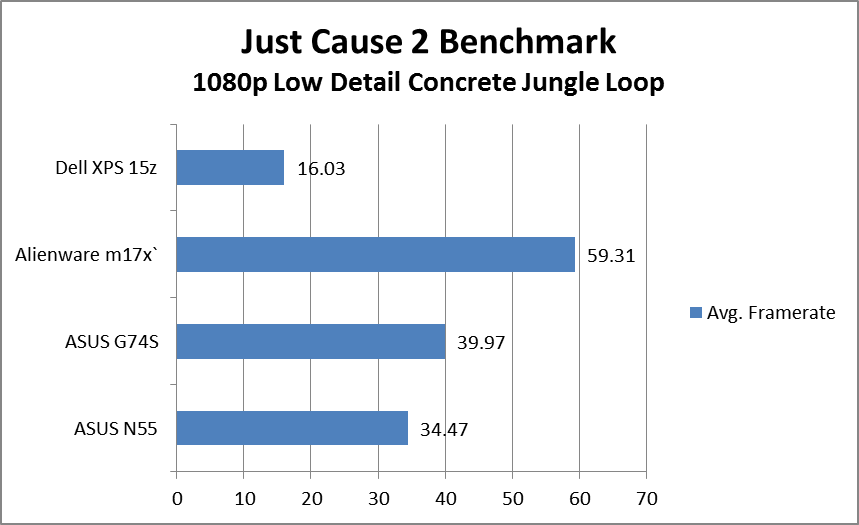 Indeed. Playing at 1080p is simply too much for the GT 525M to handle in this game. Our average of 16 FPS is representative of general gameplay. It’s jerky enough to make effective use of the game’s controls difficult. Anyone hoping to play this title on a Dell XPS 15z will have to stick with a lower resolution.

This result doesn’t give us much hope for Battlefield 3, but let’s give it a whirl anyway, shall we? 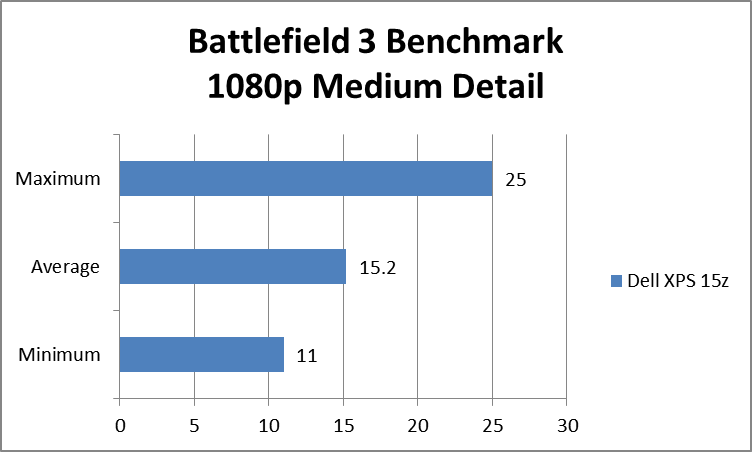 No surprise here. Trying to play BF3 at this resolution is hopeless. You’re going to need a serious gaming laptop to handle this game.

Overall, the GT 525M does seem over-matched by the display’s resolution. Only older titles will play well. This is not a problem unique to the XPS 15z, however. All non-gaming laptops with 1080p displays have difficulty with modern titles.