Along with the new Ivy Bridge processor comes a new chipset and a host of motherboards as well.   The Intel Z77 chipset, along with others like the Z75, H77, H75, B75, Q75 and Q77, are meant to be paired with the new allotment of 3rd Generation Core Processors though they honestly don’t differ much from the 6-series chipset before them.

We have done several previews of Z77 motherboards including the Gigabyte Z77X-UD5H, a roundup of boards from Gigabyte, MSI, ASUS, ECS and Intel as well as a lengthy discussion with ASUS’ JJ Guerrero about their entire Z77 lineup. 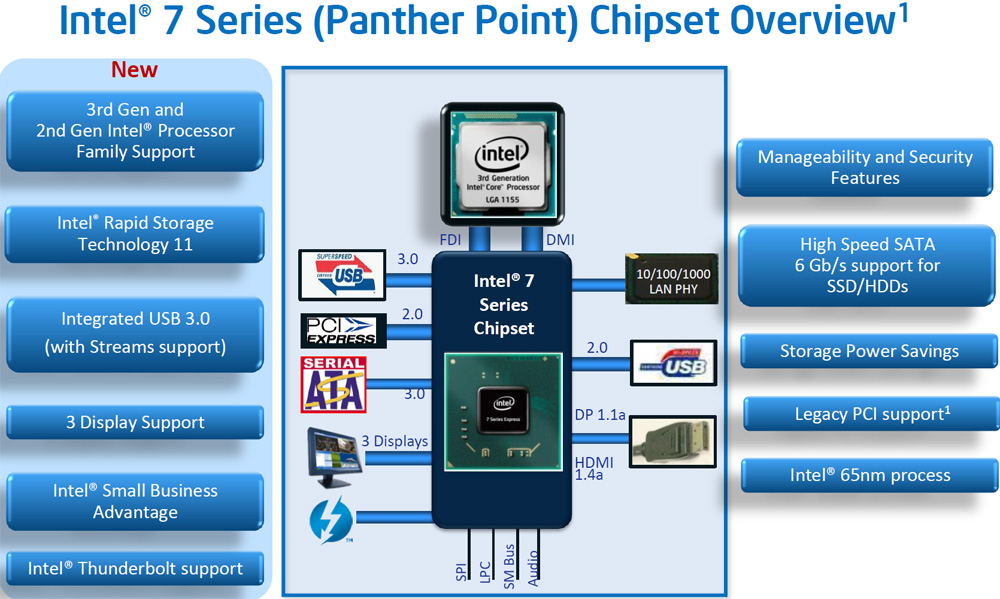 The Z77 chipset, which we are going to be focusing on for the consumer and enthusiast, still includes key features like Intel’s Rapid Storage Technology, a pair of SATA 6G ports and 14 USB channels.  What is new is the inclusion of a USB 3.0 controller supporting up to 4 of those 14 ports and "Thunderbolt support" that simply means the necessary PCI Express channels are available.

Honestly, even with the welcome addition of the USB 3.0 ports, the lack of updates to the Z77 chipset is kind of worrisome.  AMD pushes forward with 6 or more SATA 6G ports on its chipsets yet Intel seems stuck to the limit of two on its own PCH.  Thunderbolt is "supported" but not included in any chipset variant and will require a separate Intel controller at a very high cost to the consumer.

Intel has done the community a good deed this time around by supporting both forward and backward compatibility with the Ivy Bridge / Sandy Bridge CPUs into the 7-series and 6-series chipset motherboards.  If your Z68/P67 motherboard was built correctly, you should only be a BIOS update away from being able to install Ivy Bridge in it and Sandy Bridge processors should be ready to go out-of-the-box for all Z77 motherboards on the market today. 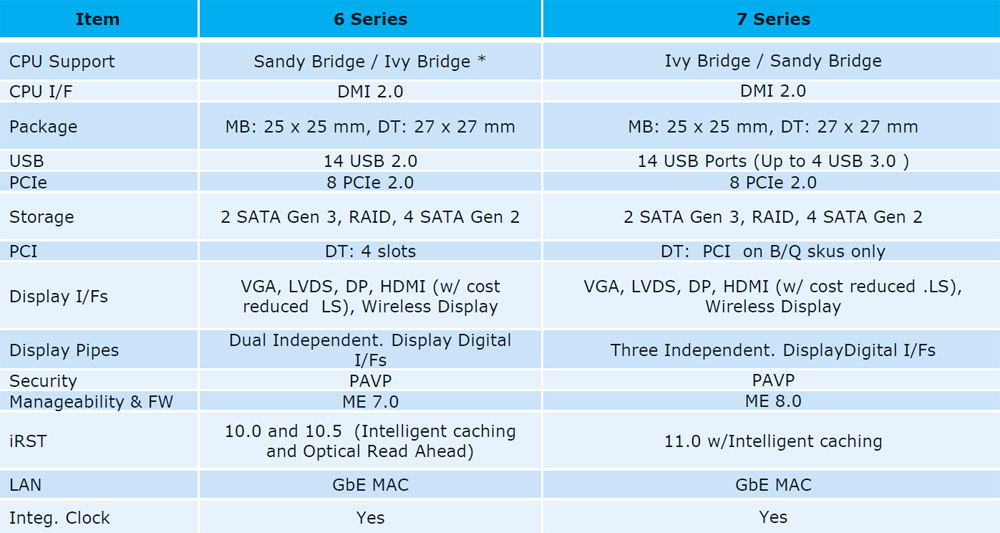 The table above really points out the lack of innovation on the chipset side of things. 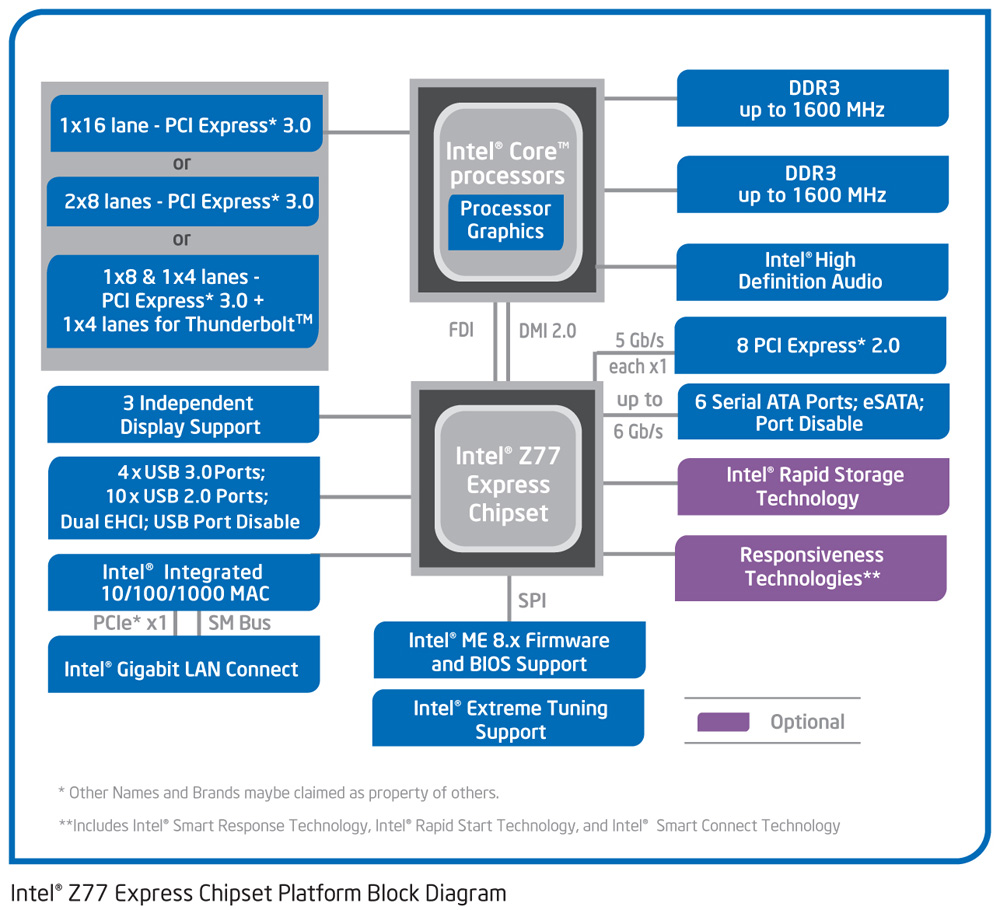 One change worth noting that might affect users with Sandy Bridge CPUs and Z77 motherboards – the PCI Express controller on the IVB CPUs will now support three connections – a single x8 PCIe slot and a pair of x4 slots, one of which should be used for a Thunderbolt controller, etc.  If you have a Sandy Bridge processor, they only have the capability to run in a two port mode, meaning you will not be able to run two GPUs (or two physical cards at all) and also run a Thunderbolt add-on card.  We have seen motherboards from MSI and Gigabyte clearly point out via stickers on the slots that one PCIe slot is simply dead and useless with a Sandy Bridge processor installed.

I already mentioned a couple of the overclocking changes on the opening page of the article but I thought this was worth showing on our platform page. 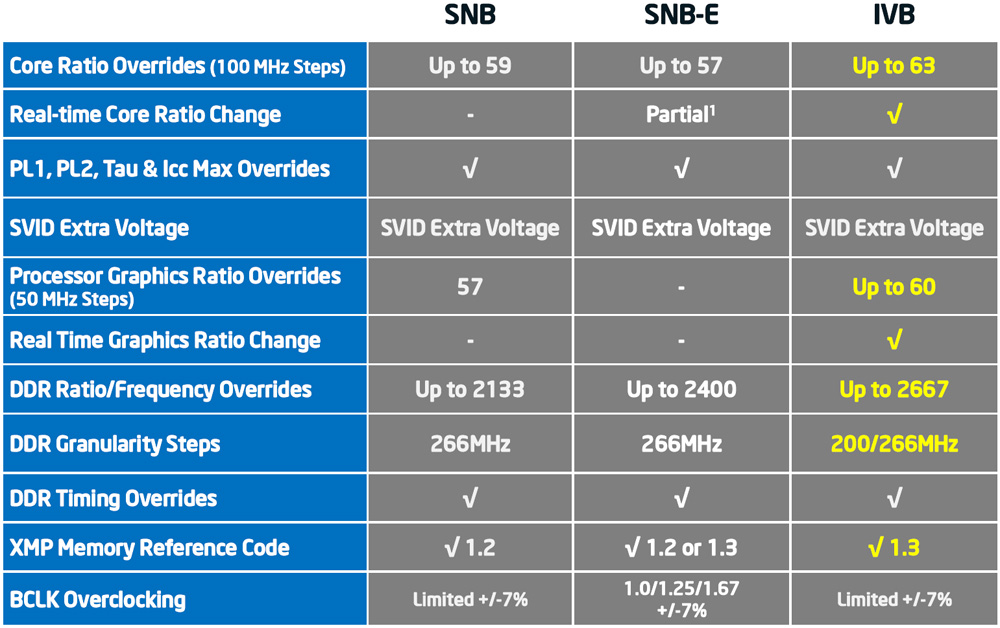 Intel has increased the maximum multiplier from 57x on Sandy Bridge to 63x for Ivy Bridge – crazy LN2 overclockers rejoice!  Memory speed support has increased but you should note that the very handy base clock "steps" or ratios that Sandy Bridge-E introduced are NOT available with Ivy Bridge and instead we are back to the days of only getting 5-7 MHz changes in the base clock to run stable.

A quiet heart for your HTPC