An update to a great architecture

The results are officially in an we have our review of the new Intel Core i7-3700K Ivy Bridge processors!

This article will focus on the new Ivy Bridge, 3rd Generation Core Processor from a desktop perspective.  If you are curious as the performance and features of the Ivy Bridge mobile processors, be sure to check out our Core i7-3720QM ASUS N56VM review here!!

One of the great things about the way Intel works as a company is that we get very few surprises on an annual basis in terms of the technology they release.  With the success of shows like the Intel Developer Forum permitting the release of architectural details months and often years ahead of the actual product, developers, OEMs and the press are able to learn about them over a longer period of time.  As you might imagine, that results in both a much better understanding of the new processor in question and also a much less hurried one.  If only GPU cycles would follow the same path… 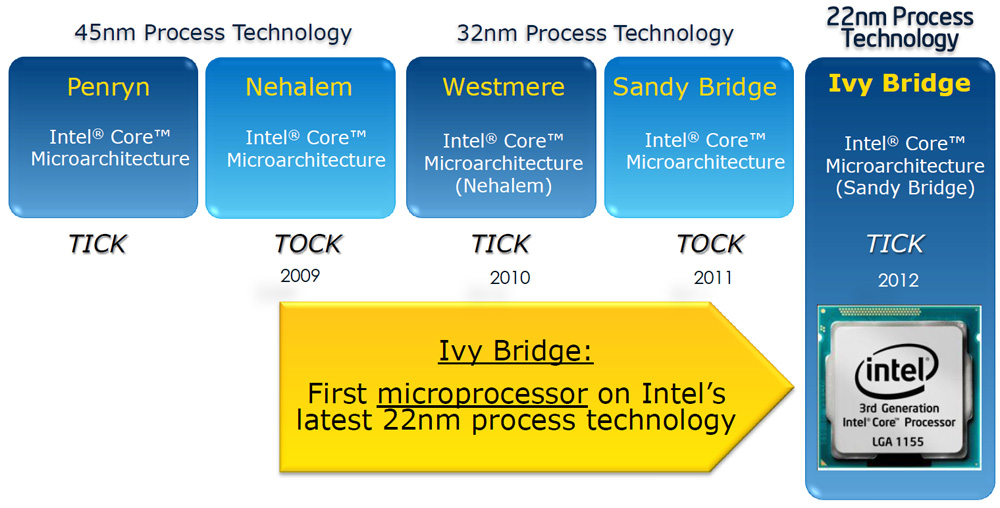 Because of this long-tail release of a CPU, we already know quite a bit about Ivy Bridge, the new 22nm processor architecture from Intel to be rebranded as the 3rd Generation Intel Core Processor Family.  Ivy Bridge is the "tick" that brings a completely new process technology node as we have seen over the last several years but this CPU does more than take the CPU from 32nm to 22nm.  Both the x86 and the processor graphics portions of the die have some changes though the majority fall with the GPU.

In previous tick-tock scenarios the "tick" results in a jump in process technology (45nm to 32nm, etc) with very little else being done.  This isn’t just to keep things organized in slides above but it also keeps Intel’s engineers focused on one job at a time – either a new microprocessor architecture OR a new process node; but not both. 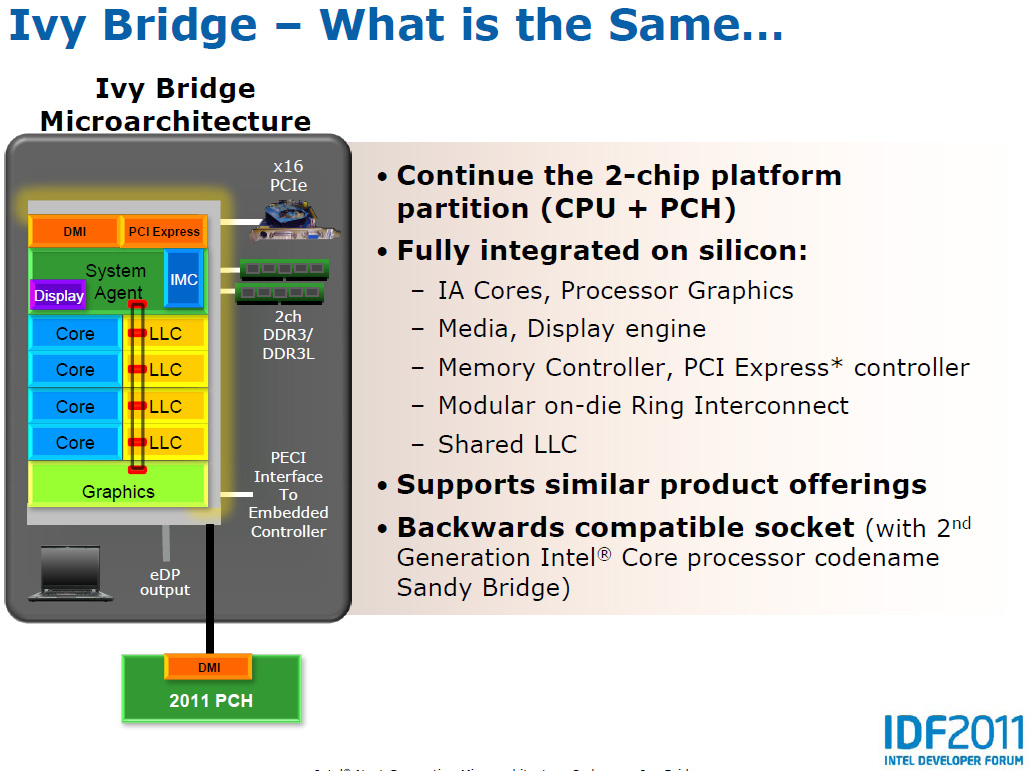 For the x86 portion of Ivy Bridge this plan stays in tract.  The architecture is mostly unchanged from the currently available Sandy Bridge processors including the continuation of a 2-chip platform solution and integrated graphics, memory controller, display engine, PCI Express and LLC along with the IA cores. 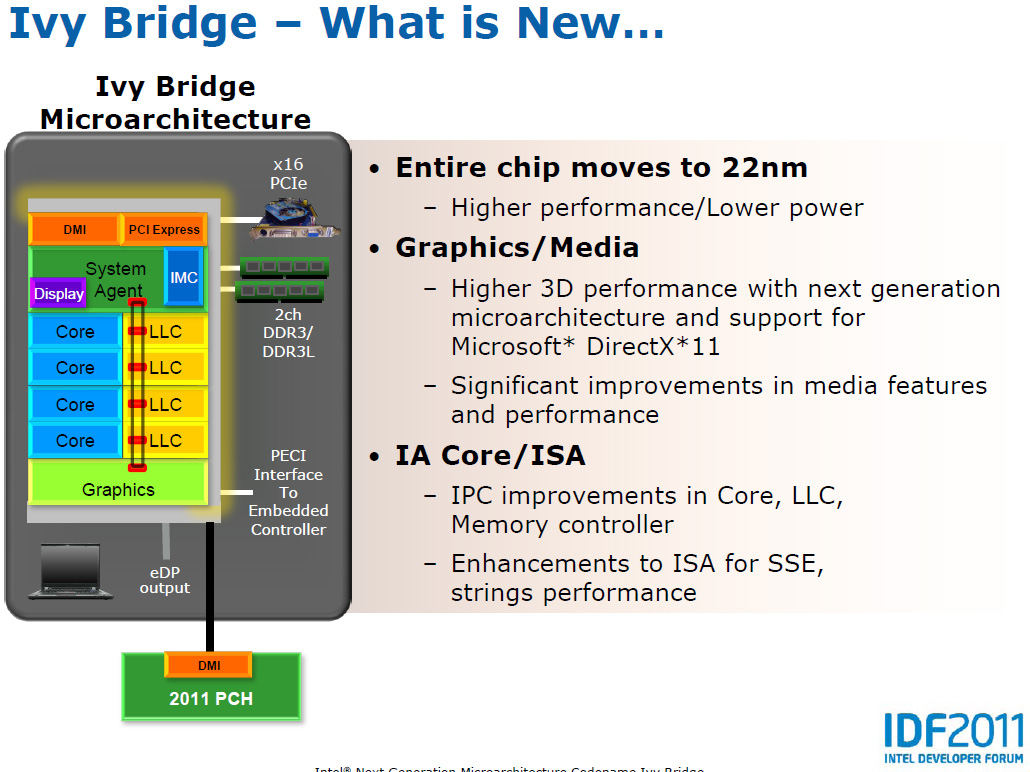 The biggest move is obviously the jump to the 22nm tri-gate transistors that Josh wrote about extensively last year.  This brings lower power consumption to the entire chip and should allow Intel to increase performance using the same power envelopes.   We’ll touch on the newly updated processor graphics portion of the chip on the next page but there are some minor IA core changes that improve IPC (instructions per clock).

With the increased performance of the graphics portion of Ivy Bridge we see a move in transistor ratio towards the GPU; though not enough to hit the 50/50 level.  The quad-core design still requires a lot of die space and the shared L3 cache of up to 8MB is meaty as well. 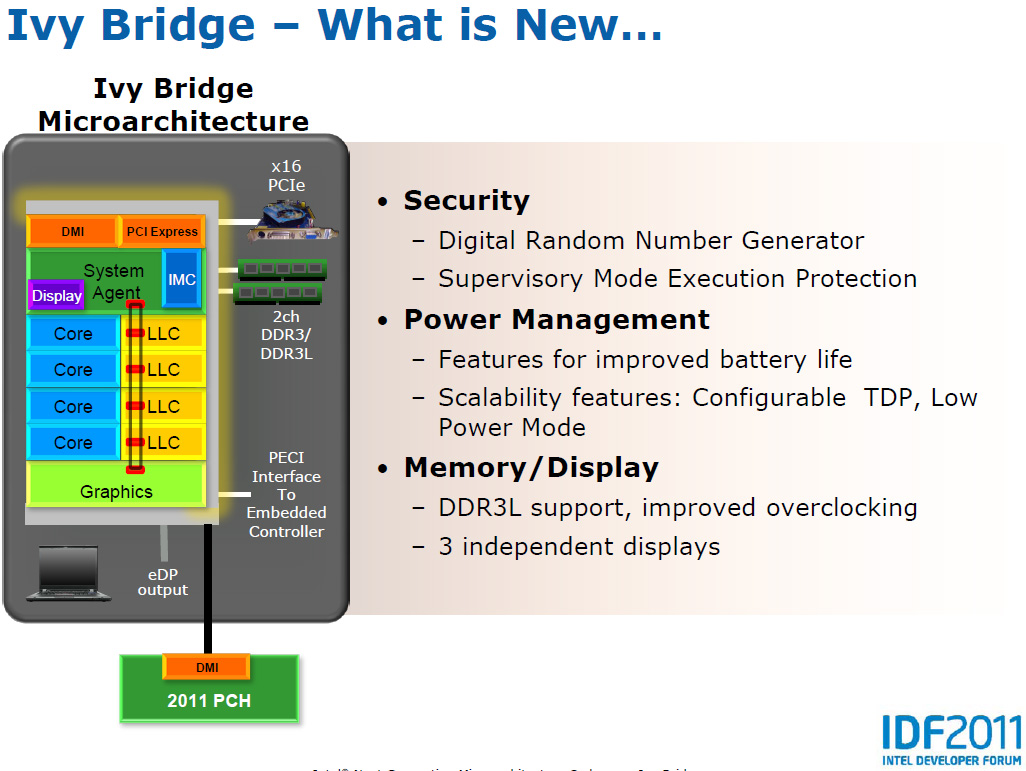 On the x86 side of things there are some changes in security including the introduction of a new random number generator that is instruction based: RDRAND.  This feature can be used by security software and even encryption algorithms to make your systems more secure in the long run.  A configurable TDP will permit large scale system builders to personalize the processors to their platforms and the ability to support as many as three independent displays is pretty impressive for an integrated solution. 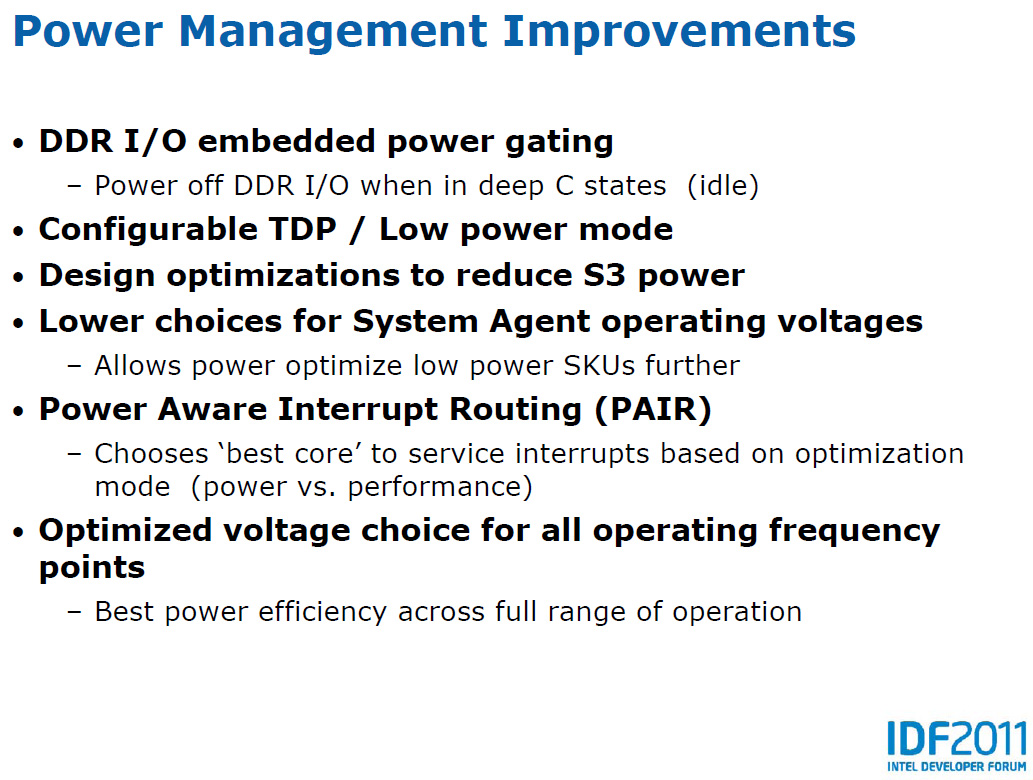 Improvements in the power management side of the CPU include the ability to power off the DDR memory bus when in deep sleep states and a new Power Aware Interrupt Routing mechanism that will select a core that is already awake and working (rather than simply core 0) to handle interrupts to keep more cores powered down more often. 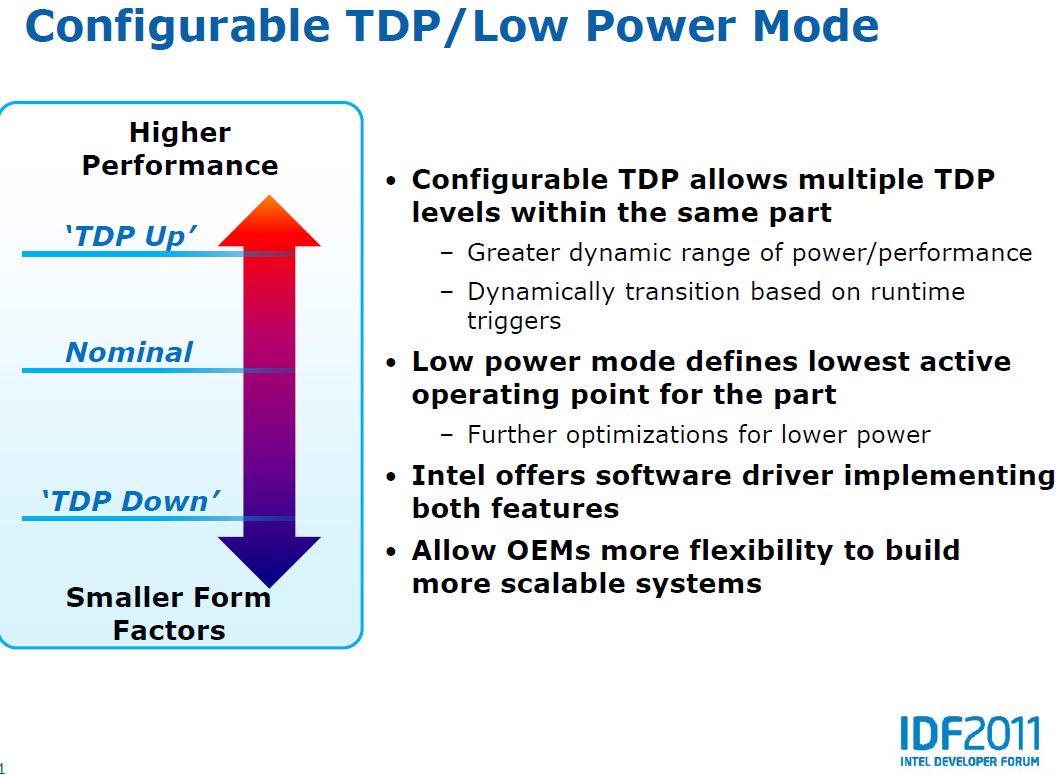 The configurable TDP won’t be a feature that users building their own machine will have access to but for OEMs it will basically allow them to create custom CPU SKUs to work in their specific designs.  If a notebook vendor would rather have a 14w unit than a 17w CPU due to some very specific custom hardware requirement, they can do that, and all in software.  You might think of this feature as a kind of configurable, permanent Turbo Boost. 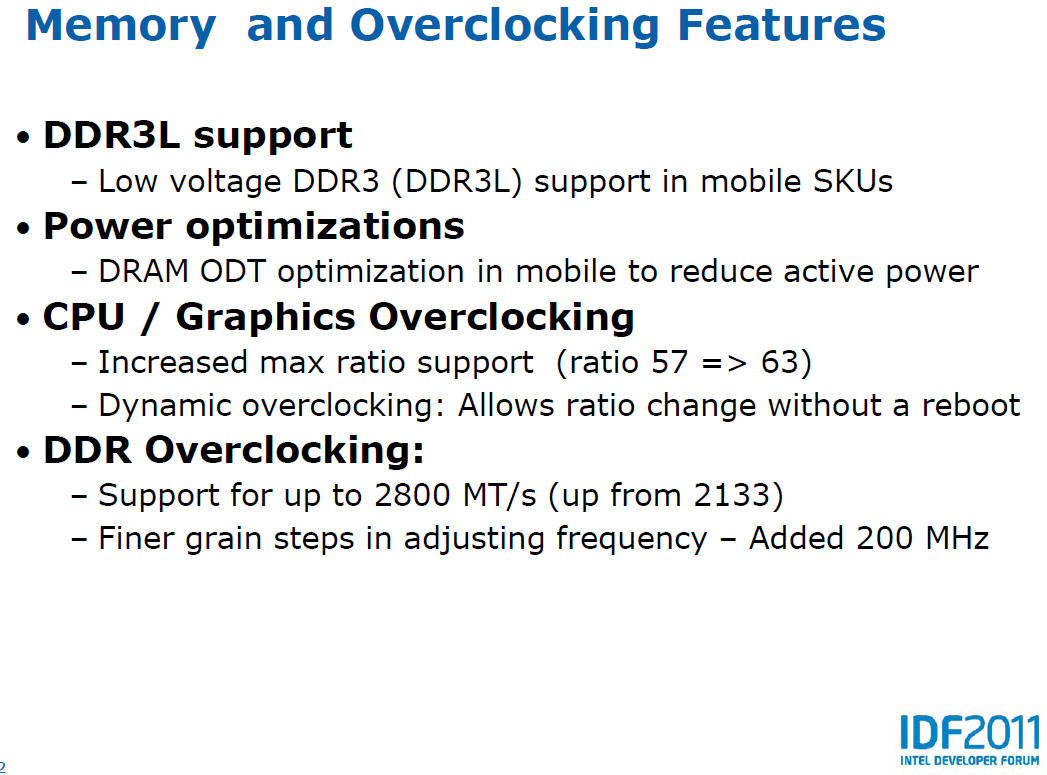 Finally, there are changes in the memory support with speeds as high as 2800 MHz running out of the box (through overclocked settings) and the ability to change the multipliers without a reboot by default.