Can the Prime challenge Apple’s champion?

Tablets are growing in popularity, but the market is still immature. There are only a handful of serious contenders sold in North America (discounting the cheap knock-offs you can find on eBay and other sites).

Apple’s iPad is the clear leader in terms of sales. It is trailed by similar Android-powered options like the Samsung Galaxy Tab, the Acer Iconia and (of coures) the ASUS Transformer Prime. We reviewed the Prime when it hit store shelves earlier this year and concluded that it was the best Android tablet money can buy. That makes a comparison with the new iPad obvious.

The constant stream of rants for or against Android and iOS devices in the media may lead you to think that the comparison between the two is highly subjective. I don’t believe that’s the case. There are a number of objective measurements that can be used to judge these products.

Yes, there is always going to be some degree of preference between operating systems, but we’re not really going to get into the iOS vs. Android argument here. That’s a topic that would require its own article, and most likely one several times longer than this comparison. Subjective points will be limited to design and ergonomics.

Enough talk. It’s time for the competition to begin.

Apple’s new iPad looks much like the old iPad. There’s not a lot going on – just one button adorns the front and the rear panel is essentially a slab of matte silver material with an Apple logo and some obligatory FCC text.

Yet the sum of these meager parts is an elegant and attractive device that never looks out of place no matter who is holding it or where it is being used. Apple seems to be the only company in the electronics business that understands most people prefer luxury over fun.

The Transformer Prime is also aesthetically pleasing and buttoned-down, but the design is not as cohesive. Instead of using a single piece of material on the back ASUS uses two – a thin frame that covers the edges and nearly flat piece of metal over the internals.

ASUS also has to deal with the fact that the company has no corporate logo. It’s difficult to make your product look elegant when four chrome letters is the only way you can brand it.

Build quality is in favor of Apple. The device is nearly seamless. In reality there is a gap between the display panel and the rear cover, but you’ll never notice it until you go looking for it. No other company builds a tablet with tolerances as tight as Apple.

I can’t say the same for the Prime, but that doesn’t mean it’s poorly constructed. Both devices feel rock-solid in hand and there is nothing wrong with the gaps between its materials. ASUS simply can’t compete with the tight tolerances of Apple’s tablet. 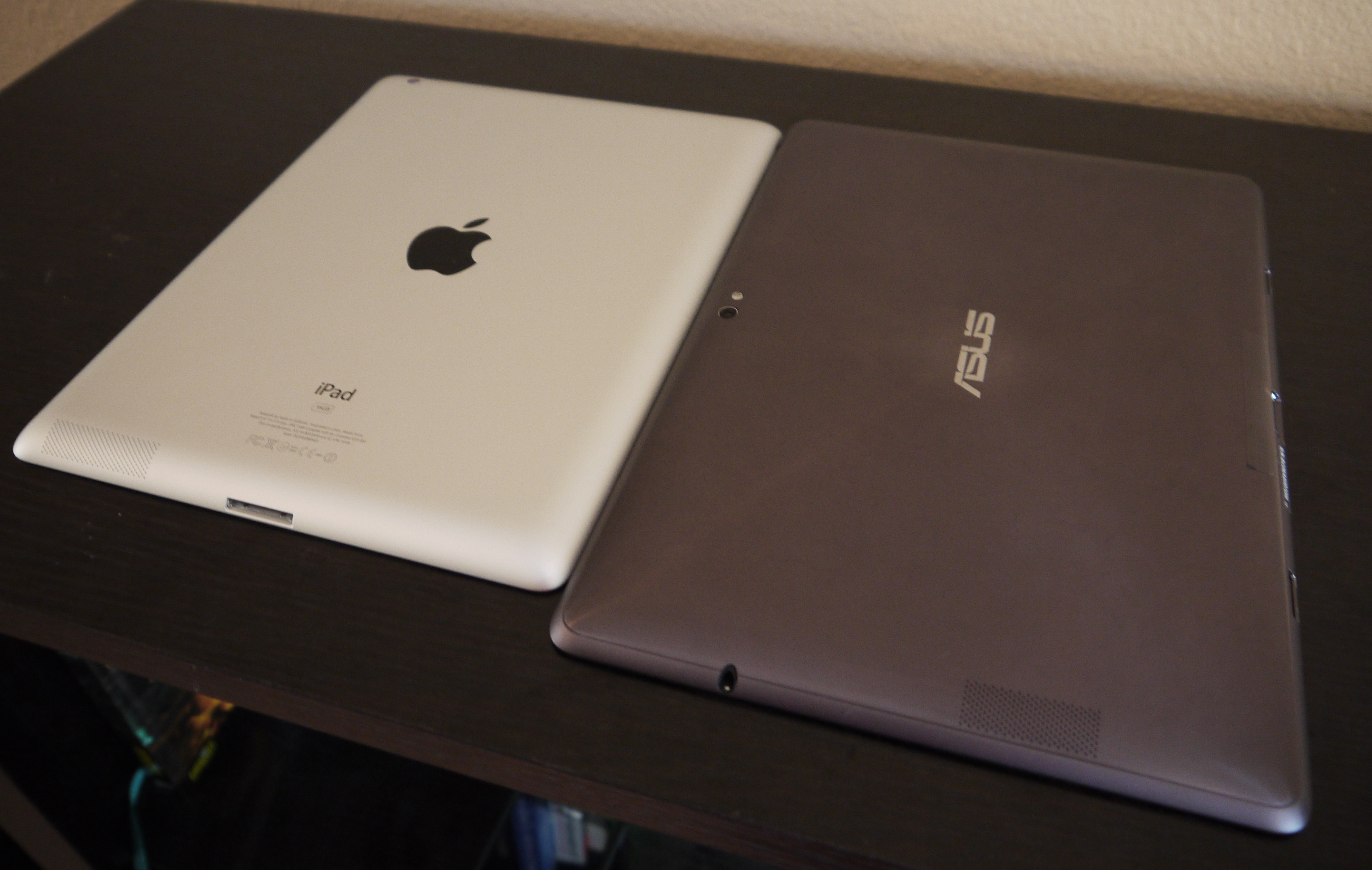 Placing the ASUS Transformer Prime and the iPad 3 side-by-side proves that there is some room for differentiation among tablets. Though they are both flat slabs, they are different in their size, weight and materials.

While the Transformer Prime and the iPad 3 have a similar quoted display size (10.1” vs 9.7”) the physical shape of each tablet is quite different. This is due to the format of each display. While the Prime has a 16:9 widescreen panel the iPad uses an old-fashioned 4:3 format. In terms of total surface area the Transformer Prime is the larger tablet, but by less than 10%.

There are pros and cons to each format, but I think Apple has the better idea. The 4:3 format results in a tablet that is more square and thus easier to wrap your hands around. Using the Prime (and any other 16:9 tablet) is not easy when it’s held width-wise.

Despite this, ergonomics is only a minor win for the iPad. Why? Size and weight. The Prime is just 8.3mm thin and weighs about 580 grams, while the iPad 3 is 9.4mm thick and weighs about 660 grams. The difference is a bit difficult to notice unless you have the tablets side by side, but over time the added weight of the iPad 3 adds up. It is a bit more tasking to hold for long periods of time.