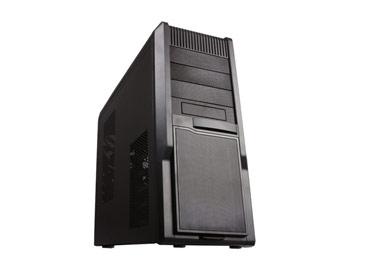 Rosewill, a company known for fans and low cost gaming chassis, announced on Monday a new mid-tower case. The new Rosewill R5 is constructed of SGCC steel, offers lots of air cooling options, and comes in at sub $100 USD.

The new R5 case comes with three 120mm fans (two intake, one rear exhaust), and can support up to eight total fans. The matte black case also features one USB 3.0 port, two USB 2.0 ports, eSATA, and audio input and output jacks on the front panel. Also, the case supports four external 5.25” bays (one of which can be converted to a 3.5” bay).

On the inside, the Rosewill R5 supports up to six 3.5” (or 2.5”) drive bays and can hold either ATX or micro ATX motherboards. The fans also includes removable dust filters. According to the company:

“We also spent countless hours researching airflow patterns and strategically placed 8 fan mounts in key positions in the R5 that will provide maximum cooling for your components while you dominate your games.”

There is no word on specific pricing or availability but it will have a sub $100 MSRP and should be available later this year.