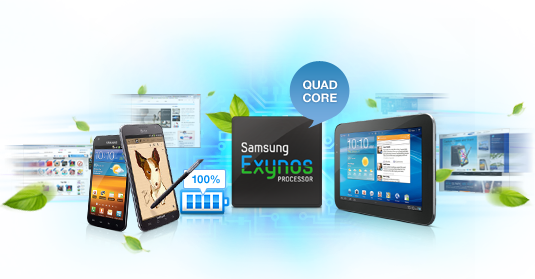 Samsung has an event scheduled for May 3rd called Mobile Unpacked where it will be unveiling their latest Galaxy series smartphone. It seems as if the company was too excited about the new hardware to wait because they have teased small bits of information on the processor. The new chip has been named the Exynos 4 and is a quad core processor running at 1.4 GHz.

Based on a 32nm HKMG (High-K Metal Gate) process node, Samsung claims the SoC uses 20% less power than it’s 45nm predecessors. The quad core processor is more power efficient thanks to the lower process node and the ability of the chip to turn individual cores off when not in use. As far as performance, the company claims the new quad core part is twice as fast as the older dual core 45nm chips. The Exynos 4 also has an integrated image signal processor for high quality camera processing and support for multi format codec (MFC) decoding. The MFC engine allows the chip to process a variety of 1080p HD video files.

A few things that are noticeably absent from the Samsung product page include any specific performance numbers, architecture details, and benchmarks. Samsung is keeping a tight lid on that information until the release but once reviewers get their hands on the Galaxy III independent benchmarks are soon to follow. The comparison between the Exynos 4 and NVIDIA’s Tegra 3 should be interesting.