It’s obvious that the processor performance of the AMD A10-4600M isn’t great. This comes as a surprise to no one including AMD. The whole “better than the sum of its parts” theme touted by the company has always seemed like a veiled apology. “We’re sorry, we know the processor isn’t that fast, but how about that GPU?”

The problem is that Intel isn’t sitting back and letting integrated graphics languish. Not anymore. It the company over a decade, but Intel has finally figured out the graphics shouldn’t be ignored. The fact that the most popular ARM chips come equipped with impressed graphics performance probably helped this sink in.

Trinity promises a significant improvement in graphics performance thanks to higher clock speeds, driver tweaks and better use of available power. Is this enough to keep Intel HD 4000 at bay? Let’s see what 3DMark has to say. 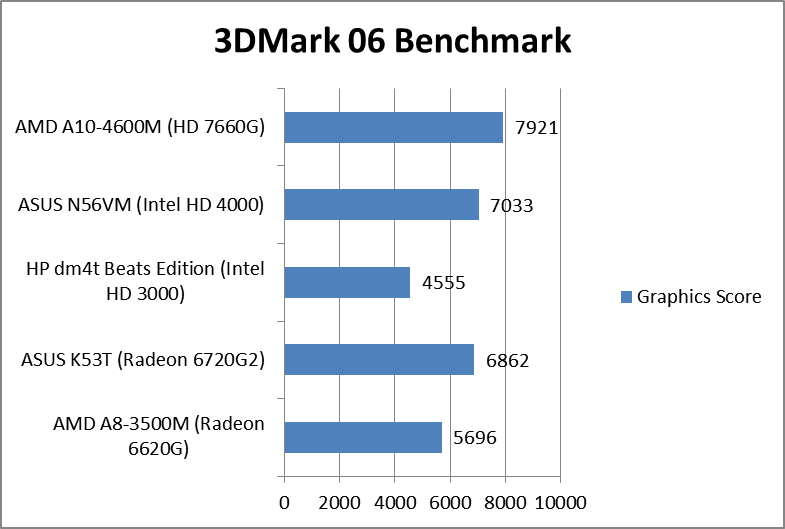 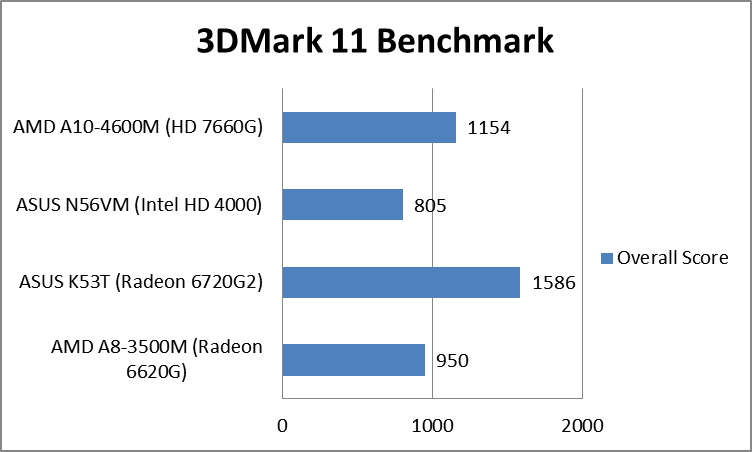 The results from 3DMark are good, but not outstanding. 3DMark 06 looks particularly bad – a difference of about 900 points between Intel HD 4000 and the new A10-4600M APU doesn’t seem like a good trade-off for the staggering difference between the performance of a Sandy Bridge or Ivy Bridge processor and the four cores found in our Trinity sample.

3DMark 11 offers more hope, as the gap of almost 350 points represents an overall score increase of about 40%. That’s nothing to laugh at, and it suggests the AMD A10-4600M may have a nice lead in newer titles. Let’s head to the real-world testing to find out.

We begin our real world gaming with Dawn of War 2: Retribution. Though now an older title with graphics that are considered simple or even out of date, the many physics and AI calculations performed by the game demand a fast processor. Previous Llano-based systems have fallen behind in this game as a result. Does Trinity do better? 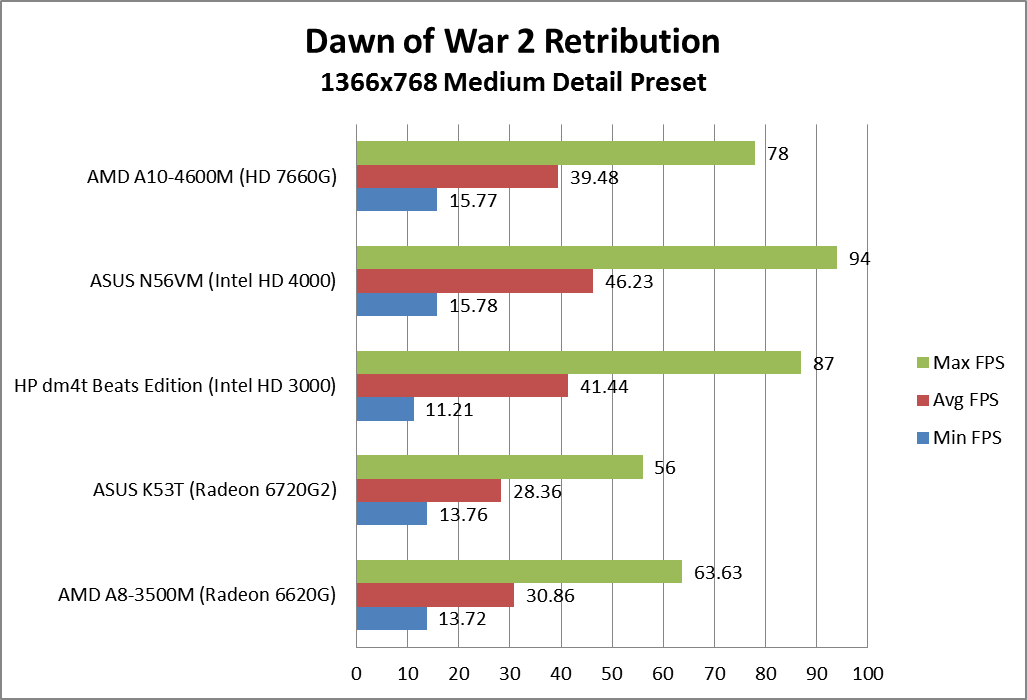 The new AMD A10-4600M has an undeniable advantage over both the AMD A8-3500M and the ASUS K53T, which featured an AMD A6-3400M with a separate discrete Radeon GPU. Even so, in this game the lackluster processor performance keeps the new Trinity part a hair behind the Intel HD 3000 system, and Intel HD 4000 squeaks out a small win.

Next up we have Just Cause 2. This game is the opposite of Dawn of War 2 – it does not seem to be processor constrained in any way and instead relies on a fast and modern graphics solution. Though now about two years old, laptops without a powerful discrete GPU will have trouble running at medium to high detail. 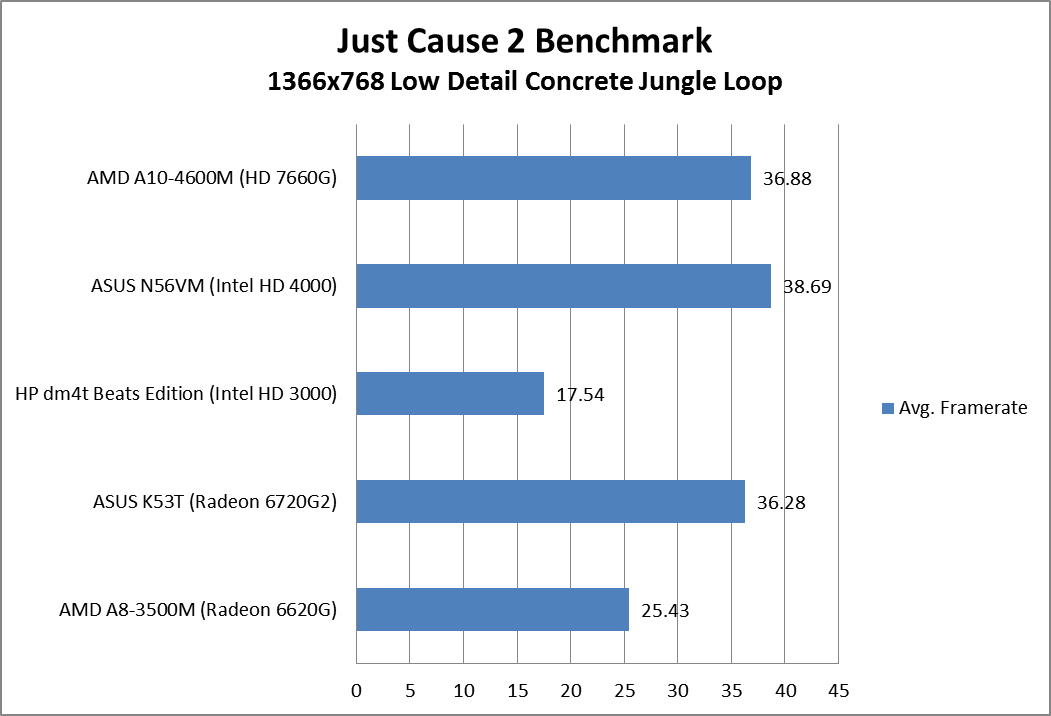 Here we see that the A10-4600M is again a big improvement over the A8-3500M. The integrated Radeon HD 7660G isn’t just quicker than the old Llano part – it’s on par with the Llano + discrete GPU solution found in the ASUS K53T. That’s quite a boost!

The only problem is that Intel has also boosted its performance substantially and as a result Intel HD 4000 scores just slightly better. Realistically, they’re on par – the game plays smoothly on both.

Finally, we’ll wrap things up with Battlefield 3. Regarded as one of today’s most demanding titles, it’s a challenge for almost any laptop even at medium detail and a resolution of just 1366×768. Can Trinity handle it? 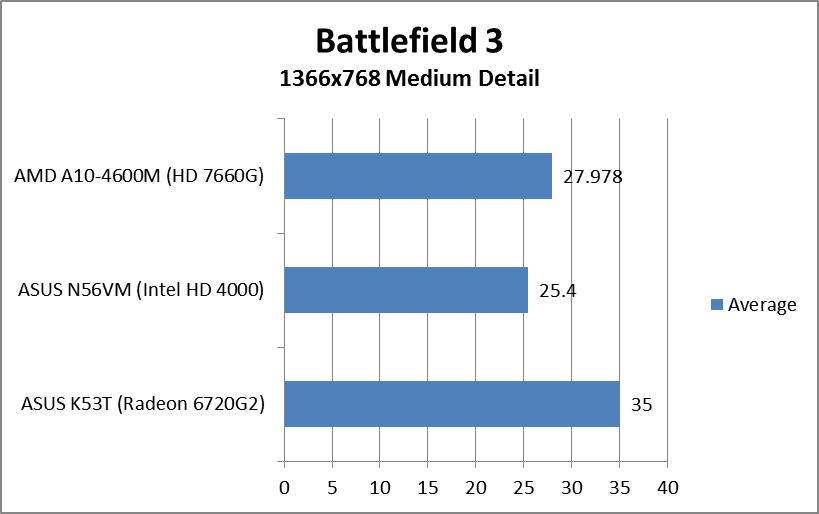 This game came out well after we reviewed the first mobile APUs, so we have no result for the first AMD A8 processor we tested. We do have results for the ASUS K53T, however, which performed well.

It turns out that all the laptops performance reasonably well. Intel HD 4000 is the slowest, but it’s only a bit less than three frames-per-second behind the HD 7660G. Again, this is a near-as-makes-no-difference result.

Both of these framerates may seem unacceptable, but the game is playable in all cases. Only barely, but if you really wanted to play Battlefield 3 and you only had Intel HD 4000 or Radeon HD 7660G, you could.

Normally the three games above are the only ones I use during a laptop review. Most of the laptops I review are not gaming laptops, and the games I use for benchmarking been chosen specifically to challenge systems in different ways.

With that said, it’s important to take a closer look when possible. And since I still have the Ivy Bridge reference system kicking around it’s possible to directly compare the two in a few other demanding games – Deus Ex: Human Revolution, Skyrim and Batman: Arkham Aslyum. 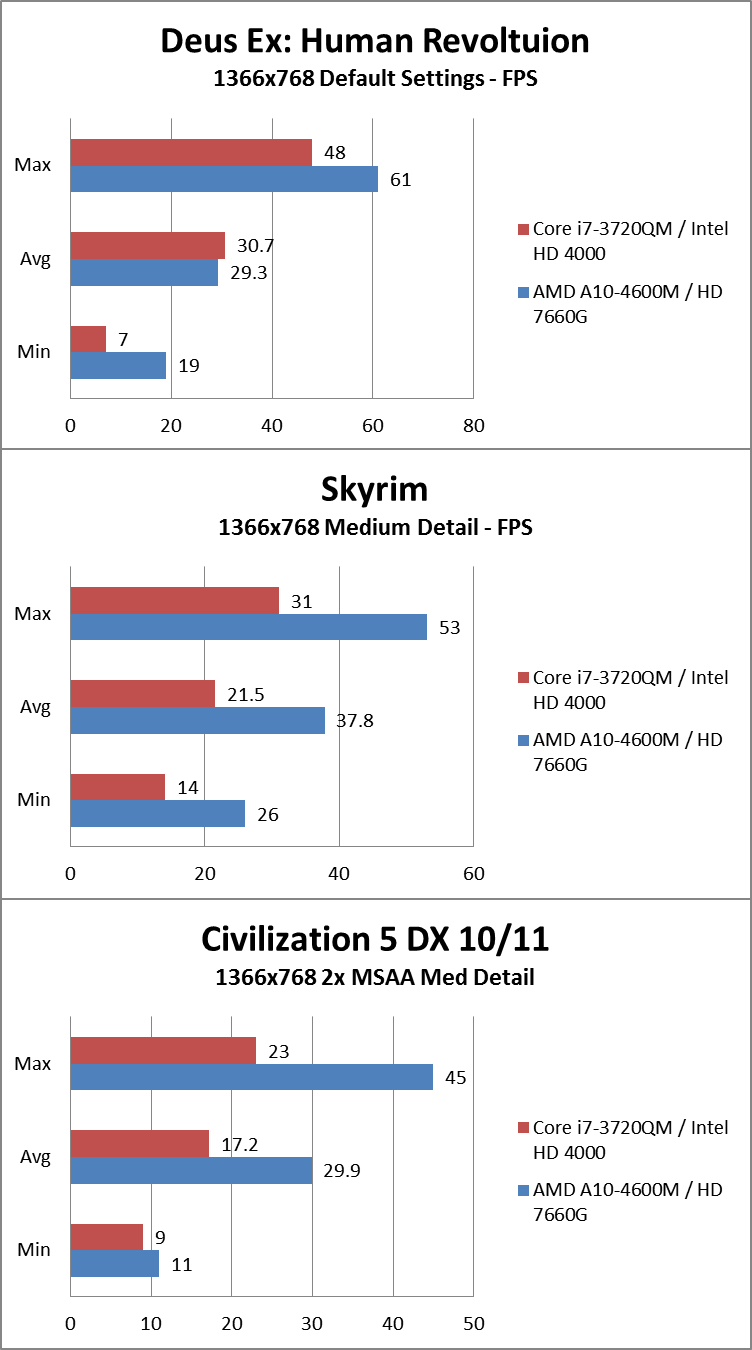 Here we have somewhat mixed results, though the wind is blowing in the direction of Trinity. Skyrim is the most significant defeat for Intel HD 4000, with Trinity nearly doubling its performance, but Civilization 5 is also significantly in favor of AMD.

Only Deus Ex: Human Revolution shows roughly similar results, but the in-game experience was slightly better with Trinity. As you can see in the results, Intel HD 4000 suffered a low minimum framerate. This showed up in-game via a few instances of sluggishness, each lasting a few seconds.

Overall, game testing indications that AMD’s A10-4600M and its HD 7660G graphics solution is superior to Intel HD 4000, but the gap is not always as large as you’d think. In some games the AMD option is nearly twice is quick (Skyrim, Civilization 5), but in other titles AMD is actually a little slower (Dawn of War 2: Retribution, Just Cause 2).