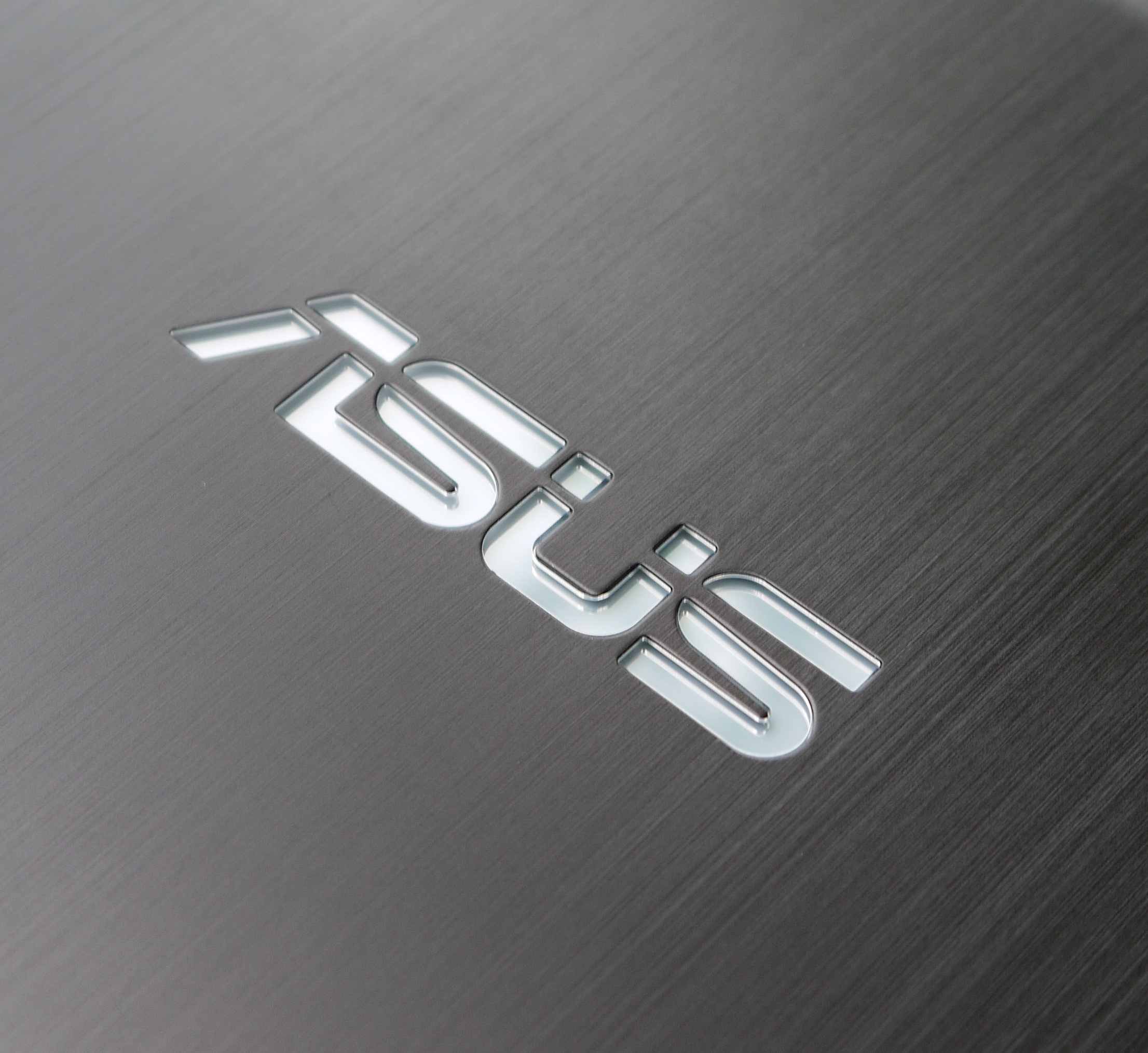 When Ivy Bridge was released Ryan did a deep-dive and desktop review while I worked on a review of the mobile processor. My mobile review was based on a reference laptop known as the ASUS N56VM. Although considered a “reference platform,” the laptop is really a production product and successor to the outgoing ASUS N55. We held off on a full review to provide coverage of the new G75, but now it’s time to revisit the N56.

This is an important product for ASUS. The 15.6” laptop remains a sales leader and the N56 will likely be the company’s flagship in this arena for the coming year. This means it won’t be a high-volume model, but it serve as a “halo product” – an example of what ASUS is capable of. If the company follows its usually modus operandi we’ll see this same chassis used as the basis for a number of variations at different price points with different hardware.

As you may remember from our Ivy Bridge for mobile review, the model we received is equipped with a Core i7-3720QM processor.  It’s hard to say if this is a mid-range quad given the limited number of Ivy Bridge products available so far, but it probably will end up in that role. What about the rest of the system? Well, take a look. 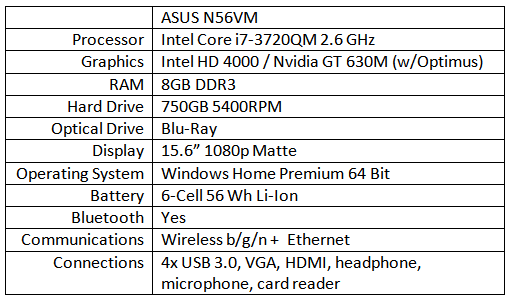 This is a well-rounded configuration offering an excellent processor, a decent GPU and plenty of storage, both short and long-term. This configuration will be priced around $1099 when it hits store shelves.

According to ASUS, the first North American versions of this product will not have this exact configuration. Instead the N56 will be introduced via the N56VZ, which has the same chassis but uses the less powerful Core i7-3610QM processor and a more powerful Kepler-based Nvidia GT 650M graphics processor. Pricing on this model will be higher, coming in at around $1299.

The hardware is the only way these laptops will be different, however – otherwise, they’ll offer the same chassis, display, speakers, battery, connectivity and more. So let’s dig and in see how the N56 competes with other high-end mainstream laptops.

In my market research of the N56 I ran across a review from PC Magazine that called this laptop “chunky.” This is statement seems to sum up where laptops are going and how the N56 stacks up when looked at through the lens of current trends. By my measure the new chassis is only 1.25 inches (about 30mm) at its thickest point – hardly a bruiser. Yet it does feel a bit larger than most other laptops I’ve recently tested.

ASUS has not wasted the mass of the N56 on cheap materials. This is a solid tank of a laptop. Metal covers the display lid and the interior. Look underneath and you’ll find a plastic base, but this is no dollar-store action figure reject. It’s dense stuff that remains free of creaks or moans no matter how the laptop is treated. Though the company has used metallic design many times in the past, this is their best effort yet, surpassing my previous favorite – the N53. 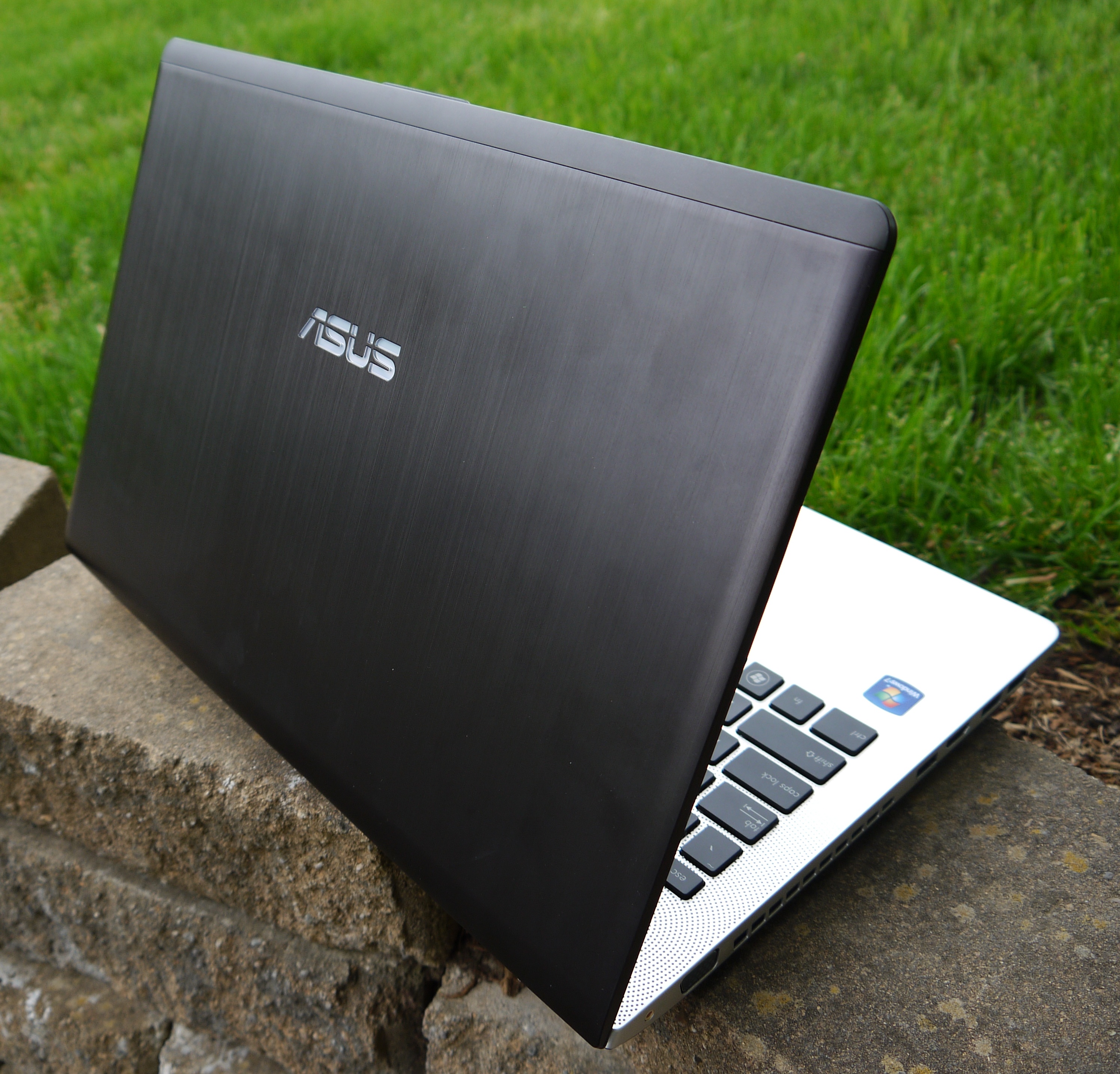 Although simple brushed metal is the order of the day, there are a few extras that spice up the exterior. On the back is an ASUS logo that lights up, Apple-style, when the system is on. Yes, it’s a rip-off, but at least it’s a well-executed one – the lighting is even and bright without being excessive. Inside the laptop you’ll find that a starburst of dots emanating from two buttons, one on each side of the laptop. This is a particularly fancy way of telegraphing the Bangs & Olufsen ICEpower audio inside the N56.

Around the perimeter of the laptop you’ll find plenty of connectivity. On the left there’s two USB 3.0 ports, HDMI, VGA and an Ethernet jack. On the right you’ll find two more USB 3.0 ports as well as the headphone and microphone jacks. 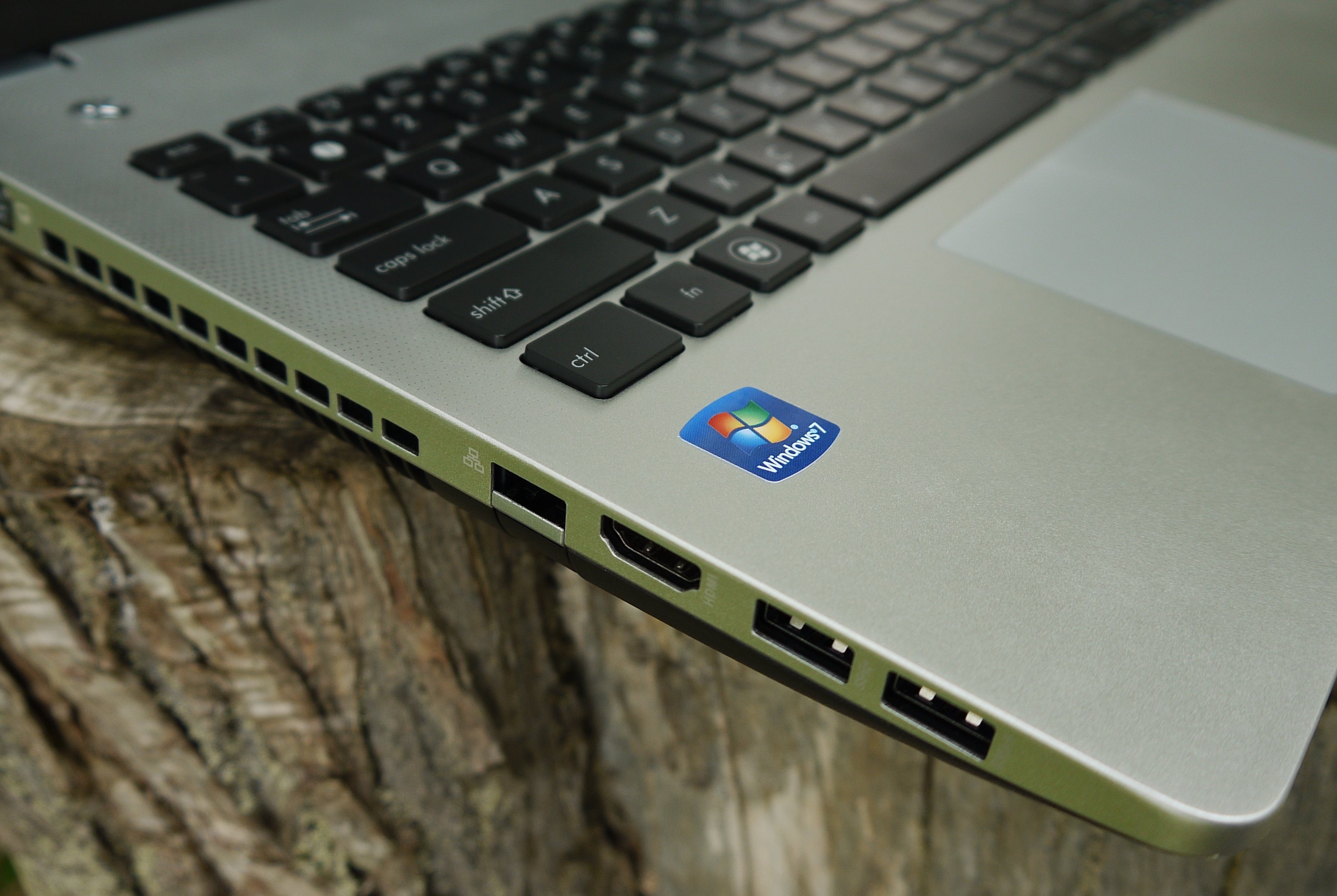 Most of the connections are near the front of the laptop, which I generally do not prefer (the plugs tend to get in the way of peripherals, such as an external mouse) but the headphone/microphone jacks are far forward, which is a perfect position. The inclusion of four USB 3.0 ports is a notable advantage over previous competitors – but also one that’s sure to be replicated by other manufactures, as four USB 3.0 ports are standard on all but one of the new Ivy Bridge mobile chipsets. 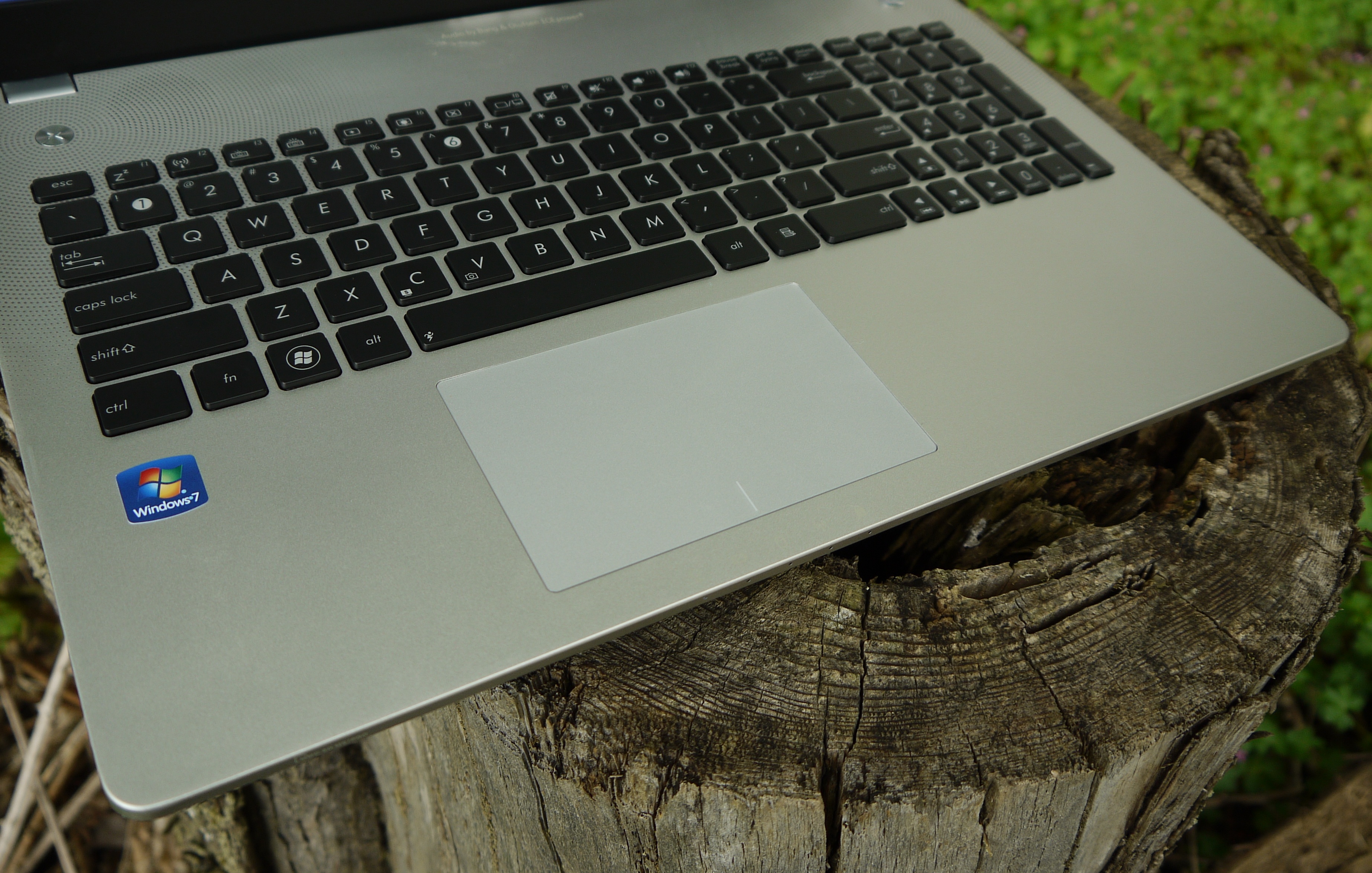 The keyboard of the N56 is interesting because it’s seamlessly integrated into the chassis. There’s no trim surrounding it, no depression in the chassis, nothing. The inside is a solid, flat piece of metal with some keys placed inside it.

Choosing this design does wonders for keyboard flex, an issue on some older ASUS laptops. There’s literally none to be found in normal typing, and even pressing hard on the center of the keyboard produces only a slight bend. This, combined with keys that provide good travel and a large palmrest area, provides a robust typing experience.

While the keyboard is good, it’s not perfect. The island-style keys have plenty of room between them but at entirely flat, and many of them are a bit smaller than could be. This is most obvious in the numpad, which squeezes itself in only through the use of small keys. Most laptops do this, but not all – I recently handle a Toshiba P755, for example, that made much better use of available space and could offer full-sized numpad keys as a result. 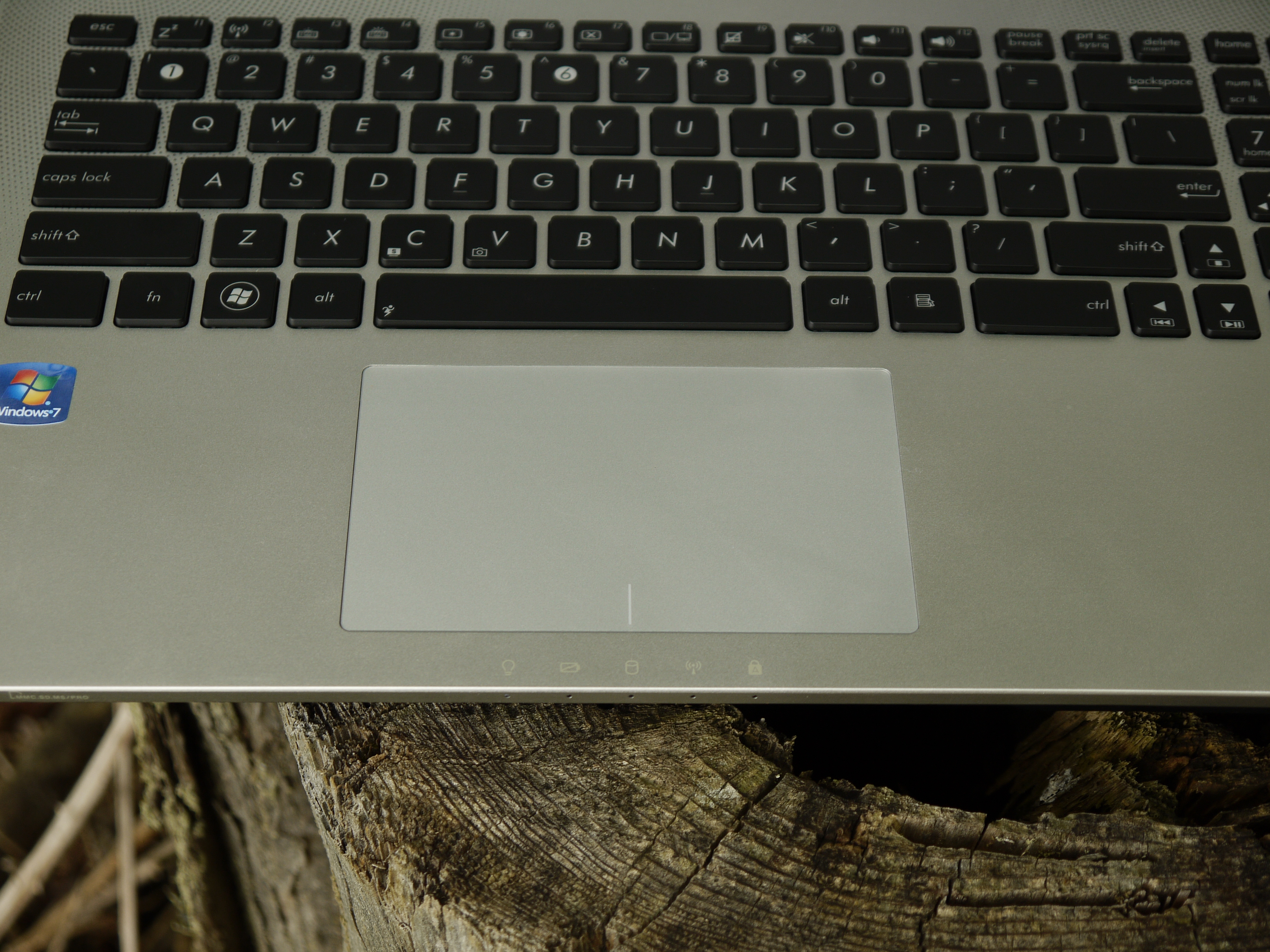 The touchpad is excellent for a Windows laptop. My preference leans towards surfaces with texture, so the overly-smooth touchpad found here isn’t my style. It makes up for this by being large and responsive. Another plus is multi-touch support. Scrolling exhibits none of the jerkiness that often plagues Windows laptops and even pinch-to-zoom works well in the web browsers I typically use (Firefox and Chrome).