NVIDIA teased us long enough, let’s so how impressive the performance of the new GTX 690 grraphics really is!

On Thursday May the 3rd at 10am PDT / 1pm EDT, stop by the PC Perspective Live page for an NVIDIA and PC Perspective hosted event surrounding the GeForce GTX 690 graphics card. Ryan Shrout and Tom Petersen will be on hand to talk about the technology, the performance characteristics as well as answer questions from the community from the chat room, twitter, etc. Be sure to catch it all at https://pcper.com/live

Okay, so it’s not a surprise to you at all, or if it is, you haven’t been paying attention.  Today is the first on-sale date and review release for the new NVIDIA GeForce GTX 690 4GB dual-GPU Kepler graphics card that we first announced in late April.  This is the dream card any PC gamer out there combining a pair of GTX 680 GK104 GPUs on a single PCB and running them in a single slot SLI configuration and is easily the fastest single card we have ever tested.  It also the most expensive reference card we have ever seen with a hefty $999 price tag. 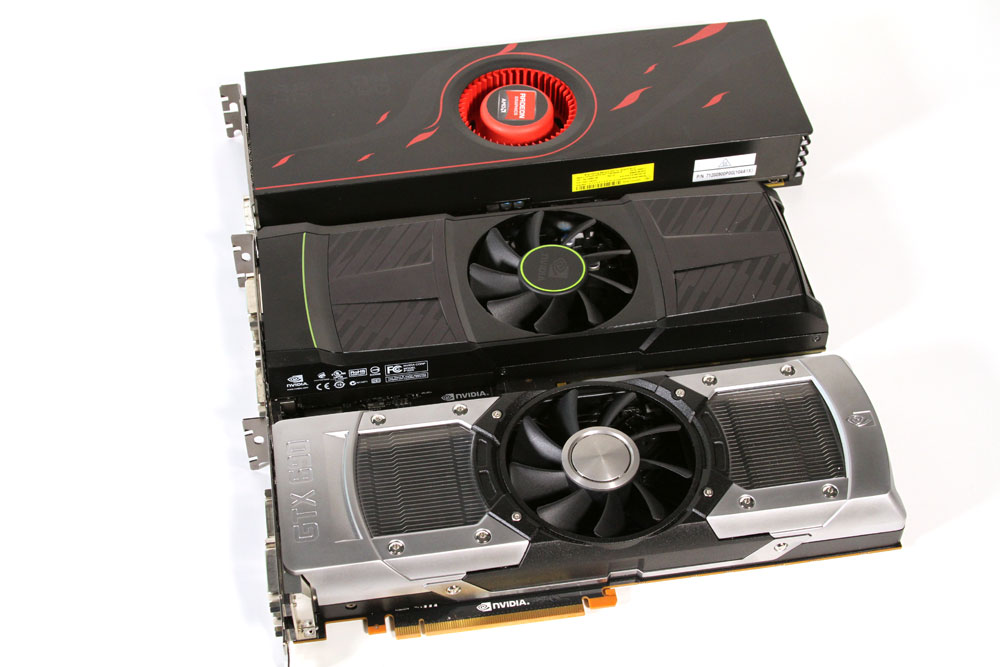 So how does it perform?  How about efficiency and power consumption – does the GTX 690 suffer the same problems the GTX 590 did?  Can AMD hope to compete with a dual-GPU HD 7990 card in the future?  All that and more in our review!

For those of you that may have missed the boat on the GTX 680 launch, the first card to use NVIDIA’s new Kepler GPU architecture, you should definitely head over and read my review and analysis of that before heading into the deep-dive on the GTX 690 here today. 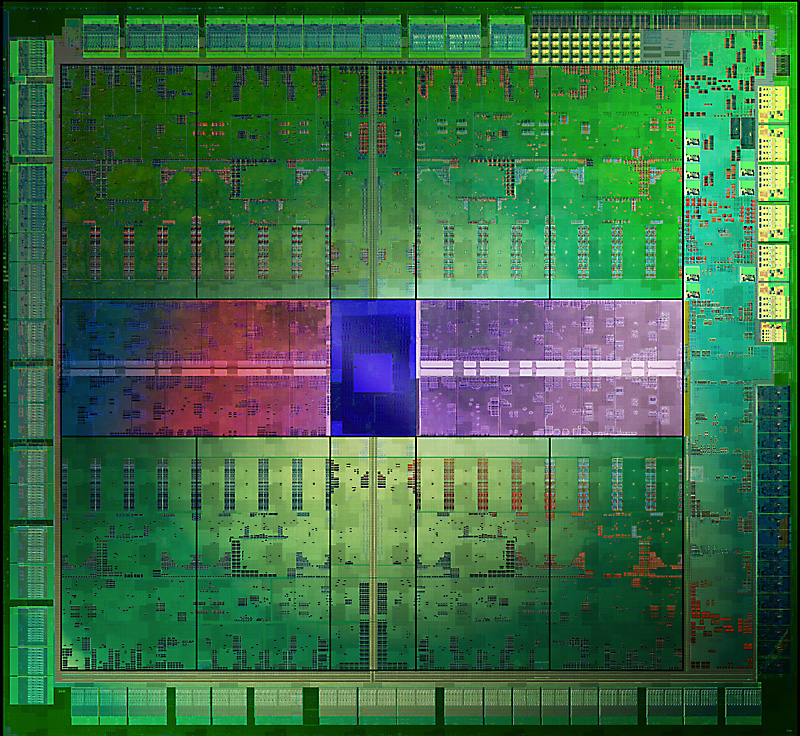 Kepler is a 3.54 billion transistor GPU with 1536 CUDA cores / stream processors contained within and even in a single GPU configuration is able produce some impressive PC gaming performance results.  The new SMX-based design has some modest differences from Fermi the most dramatic of which is the removal of the "hot clock" – the factor that ran the shaders and twice the clock speed of the rest of the GPU.  Now, the entire chip runs at one speed, higher than 1 GHz on the GTX 680.

Each SMX on Kepler now includes 192 CUDA cores as opposed to the 32 cores found in each SM on Fermi – a change that has increased efficiency and performance per watt quite dramatically.

As I said above, there are lot more details on the changes in our GeForce GTX 680 review.

Many of the details surrounding the GTX 690 have already been revealed by NVIDIA’s CEO Jen-Hsun Huang during a GeForce LAN event in China last week.  The card is going to be fast, expensive and is built out of components and materials we haven’t seen any graphics card utilize before.

Depsite the high performance level of the card, the GTX 690 isn’t much heavier and isn’t much longer than the reference GTX 680 card.  We’ll go over the details surrounding the materials, cooler and output configuration on the next page, but let’s take some time just to look and debate the performance specifications. 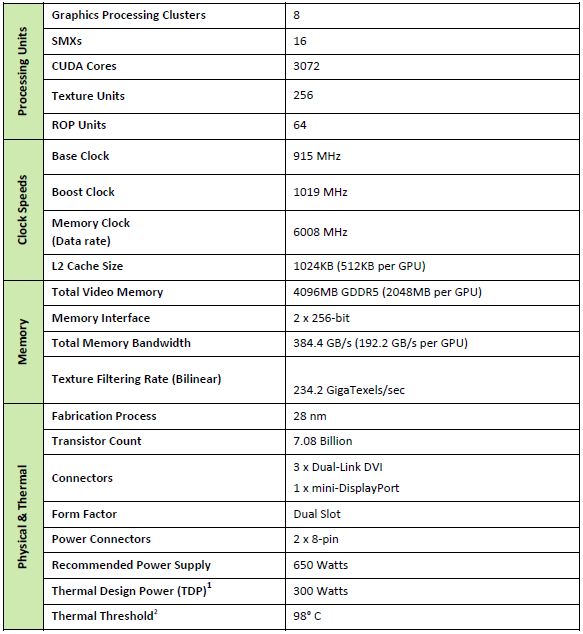 NVIDIA markets the GTX 690 as having 3072 CUDA cores and 16 SMX units.  This is correct but we have to keep in mind that we are looking at two separate GPUs, each with 1536 cores and 8 SMX units to get to that total.  Each GPU also sports 128 texture units and 32 ROPs.  That is a LOT of processing power on a single graphics card but I have always stated that having multi-GPUs of performance is never as ideal as having the same performance on a single GPU for some pretty obvious reasons.  Obviously you can’t get a single GPU with this much horsepower so the debate is somewhat altered but don’t expect to see 2x the performance of a single GTX 680 with this card – standard SLI rules apply.

Better still, the Boost Clock of the GTX 690 is 1019 MHz, only 39 MHz (4%) lower than that of the GTX 680.  So, in a typical game in a typical scenario, we expect the GTX 690 to run within 4% of the performance of a pair of standard GTX 680 cards running in SLI.  NVIDIA was able to accomplish this by binning the GK104 GPUs to find those that offered the best performance efficiency and had the least leakage, able to clock higher while using less power. 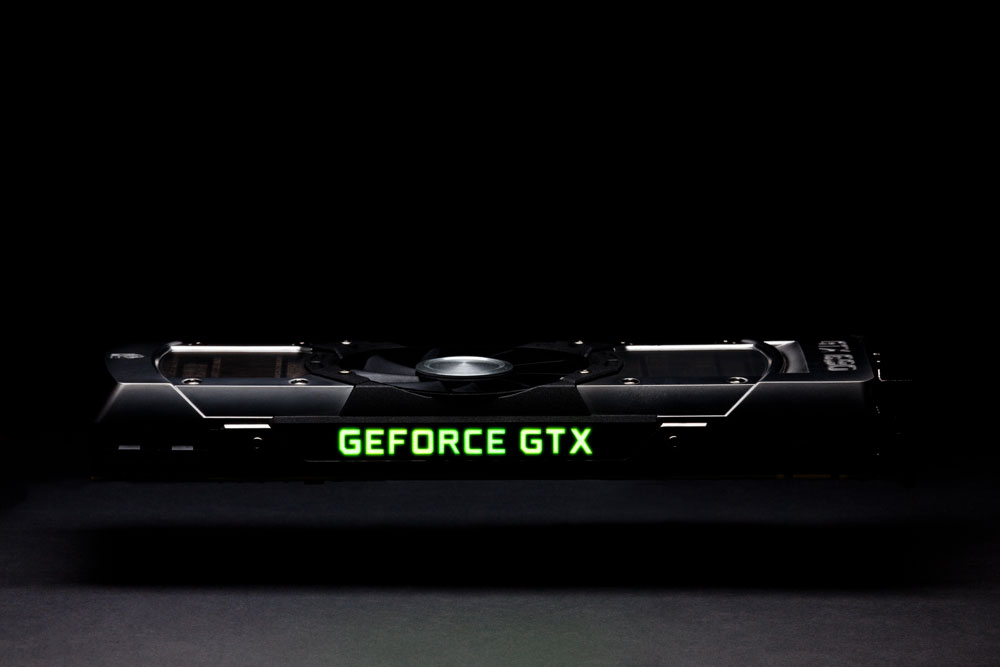 Each of the GK104 GPUs will have access to its own 2GB frame buffer running at the amazing 1500 MHz / 6 Gbps data rate, so again we don’t expect to see any performancce drop because of this new implementation.

Let’s take a closer look at the GTX 690 reference card!!