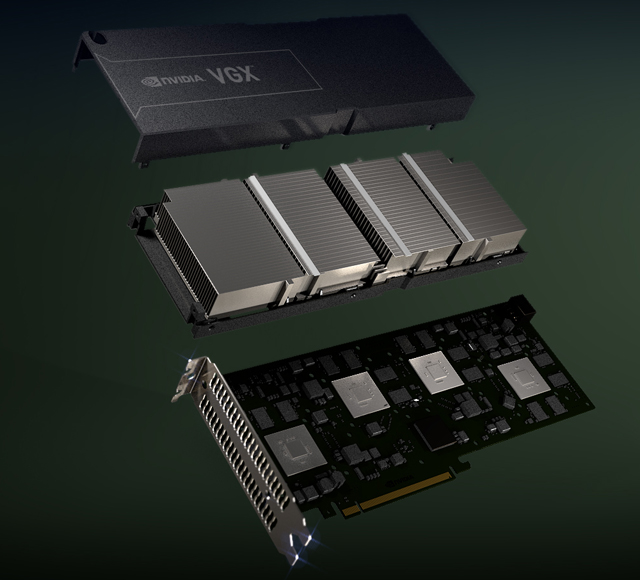 One of the more interesting announcements so far at the GTC has been NVIDIA’s wholehearted leap into desktop virtualization with NVIDIA VGX series of add on cards.  Not really a graphics card and more specialized than the Tesla, GPU VDI will give you a GPU accelerated virtual machine.  If you are wondering why you would need that consider a VM which can handle an Aero desktop and stream live HD video where the processing power comes not from the CPU but from a virtual GPU.  They’ve partnered it with Hypervisor which can integrate with existing VM platforms to provide virtual GPU control as well as another piece of software which allows you to pick and choose what graphics resources your users get.

SAN JOSE, Calif.—GPU Technology Conference—May 15, 2012—NVIDIA today unveiled the NVIDIA VGX platform, which enables IT departments to deliver a virtualized desktop with the graphics and GPU computing performance of a PC or workstation to employees using any connected device.

With the NVIDIA VGX platform in the data center, employees can now access a true cloud PC from any device – thin client, laptop, tablet or smartphone – regardless of its operating system, and enjoy a responsive experience for the full spectrum of applications previously only available on an office PC.

NVIDIA VGX enables knowledge workers for the first time to access a GPU-accelerated desktop similar to a traditional local PC. The platform’s manageability options and ultra-low latency remote display capabilities extend this convenience to those using 3D design and simulation tools, which had previously been too intensive for a virtualized desktop.

Integrating the VGX platform into the corporate network also enables enterprise IT departments to address the complex challenges of “BYOD” – employees bringing their own computing device to work. It delivers a remote desktop to these devices, providing users the same access they have on their desktop terminal. At the same time, it helps reduce overall IT spend, improve data security and minimize data center complexity.

“NVIDIA VGX represents a new era in desktop virtualization,” said Jeff Brown, general manager of the Professional Solutions Group at NVIDIA. “It delivers an experience nearly indistinguishable from a full desktop while substantially lowering the cost of a virtualized PC.”

The NVIDIA VGX platform is part of a series of announcements NVIDIA is making today at the GPU Technology Conference (GTC), all of which can be accessed in the GTC online press room.

The VGX platform addresses key challenges faced by global enterprises, which are under constant pressure both to control operating costs and to use IT as a competitive edge that allows their workforces to achieve greater productivity and deliver new products faster. Delivering virtualized desktops can also minimize the security risks inherent in sharing critical data and intellectual property with an increasingly internationalized workforce.

NVIDIA VGX is based on three key technology breakthroughs:

The NVIDIA VGX platform enables up to 100 users to be served from a single server powered by one VGX board, dramatically improving user density on a single server compared with traditional virtual desktop infrastructure (VDI) solutions. It sharply reduces such issues as latency, sluggish interaction and limited application support, all of which are associated with traditional VDI solutions.

With the NVIDIA VGX platform, IT departments can serve every user in the organization – from knowledge workers to designers – with true PC-like interactive desktops and applications.

The boards benefit from a range of advancements, including hardware virtualization, which enables many users who are running hosted virtual desktops to share a single GPU and enjoy a rich, interactive graphics experience; support for low-latency remote display, which greatly reduces the lag currently experienced by users; and, redesigned shader technology to deliver higher power efficiency.

NVIDIA VGX GPU Hypervisor
The NVIDIA VGX GPU Hypervisor is a software layer that integrates into a commercial hypervisor, enabling access to virtualized GPU resources. This allows multiple users to share common hardware and ensure virtual machines running on a single server have protected access to critical resources. As a result, a single server can now economically support a higher density of users, while providing native graphics and GPU computing performance.

This new technology is being integrated by leading virtualization companies, such as Citrix, to add full hardware graphics acceleration to their full range of VDI products. 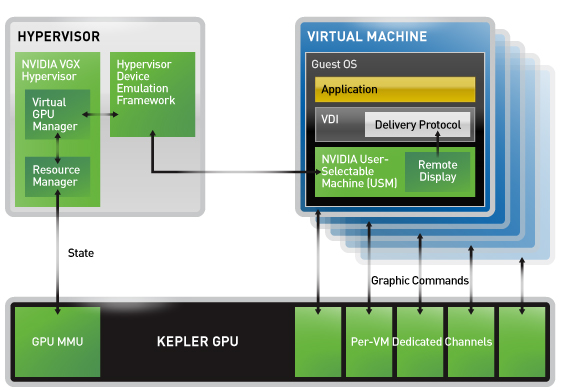 NVIDIA User Selectable Machines
NVIDIA USMs allow the NVIDIA VGX platform to deliver the advanced experience of professional GPUs to those requiring them across an enterprise. This enables IT departments to easily support multiple types of users from a single server.

USMs allow better utilization of hardware resources, with the flexibility to configure and deploy new users’ desktops based on changing enterprise needs. This is particularly valuable for companies providing infrastructure as a service, as they can repurpose GPU-accelerated servers to meet changing demand throughout the day, week or season.