AMD has put a lot of time and effort into making these new HD 7000 series chips very power efficient. Using TSMC’s latest 28 nm HKMG process, these chips should provide very good performance without breaking the power bank. As previously stated, the 7850 is a 130 watt TDP part while the 7870 is rated at 170 watts TDP. Compare this to the N580 GTX which is (mostly) 250 watts to 300 watts and the 7970 which is again in the 250 to 275 watt range. 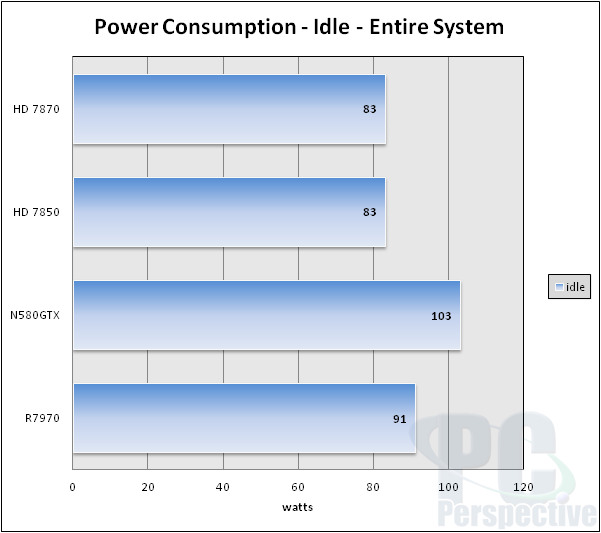 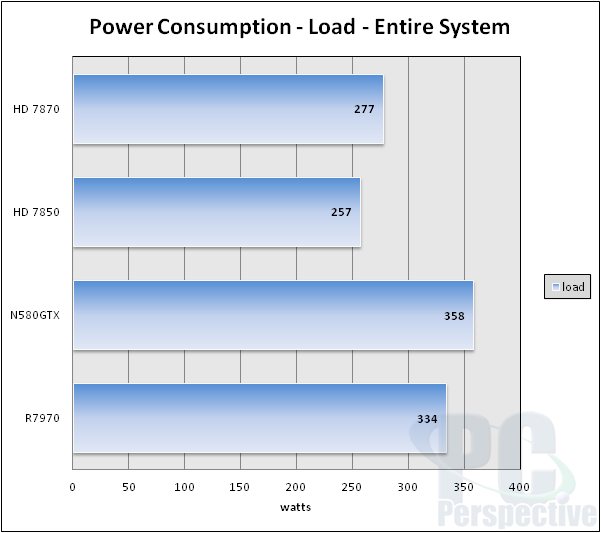 At idle we see the zero power state kick in nicely for the AMD cards. Once things get moving though, we see the advantages of the 28 nm process. The HD 7870 was right next to the N580 GTX in performance throughout testing, but at load is a good 81 watts lower in power consumption. Less power at the wall and a lower overall temperature are good things. 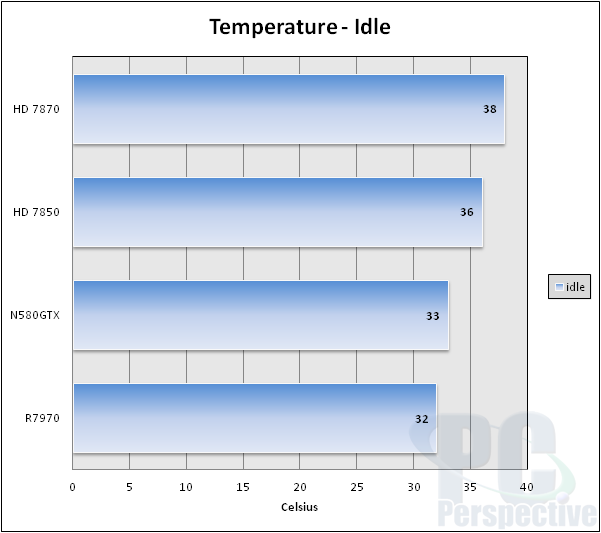 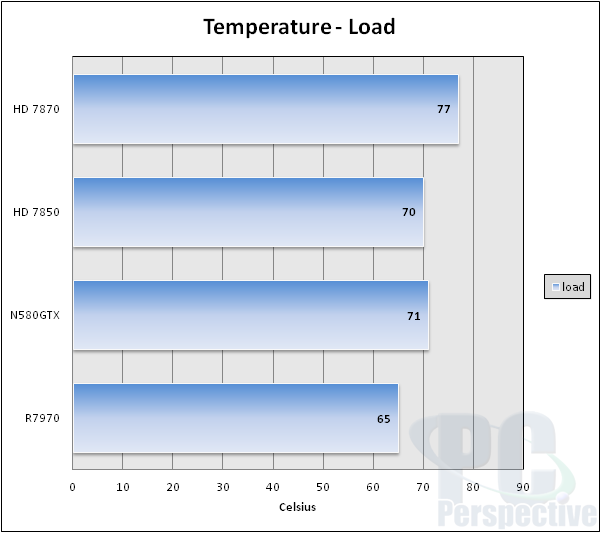 On the cooling side things are a bit different. The N580 GTX features the MSI Twin Frozr III setup, while the R7970 is the updated Twin Frozr IV. These two designs are very high end and feature large fans and a massive (and tightly packed) aluminum fin array. At idle we see a pretty hefty difference in temperatures, even with the older N580 GTX. At load we again see how well those MSI units perform, even with much hotter and larger chips to cool. The HD 7850 is right there, but it is a lower clocked chip with a much lower TDP. The HD 7870 is a bit toastier, but still well below the 85C to 90C that we see reference cooling designs hit.

The MSI Afterburner software did not work with these cards, so voltage modifications could not be introduced. When Afterburner was run, the entire system would lock. As such, I was forced to use the native overclocking tool provided with the AMD drivers. I set Power Tune to + 20% and went for it.

The HD 7850 had a driver limited max speed of 1050 MHz, and it hit that very easily. The top memory speed came in at 1375 MHz (5500 MHz effective). This gives a total bandwidth of 176 GB/sec. Not a bad result, and as such it provided a nice boost for the card in games and benchmarks. It was not able to match the overall performance of the XFX R7870 because of the disabled stream units, but it should be faster than a stock clocked HD 7870.

The HD 7870 was a bit more interesting. The top allowed overclock by the AMD driver is 1400 MHz. I was not able to reach that speed. Instead I was able to get to 1225 MHz stable. This is a nice 175 MHz jump from the stock clock, and in every case this card was able to outrun the older N580 GTX. I did see the temps go into the 80s though, but the fan profile kept the speed around 40% and it was certainly not annoying in terms of volume or fan whine. The memory hit the same 1375 MHz as the HD 7850 did. Anything over that caused performance to drop.

Trying to sneak in a last card