XFactor is the catch-all for higher quality components throughout the board. Solid capacitors, ferrite core chokes, and the dust-free IP-5X fan are the big features. Asus and MSI feature these kinds of higher end components, and the idea is that these will last longer than the actual warranty of the card. Failure will likely happen many years from now, when the card is truly obsolete. 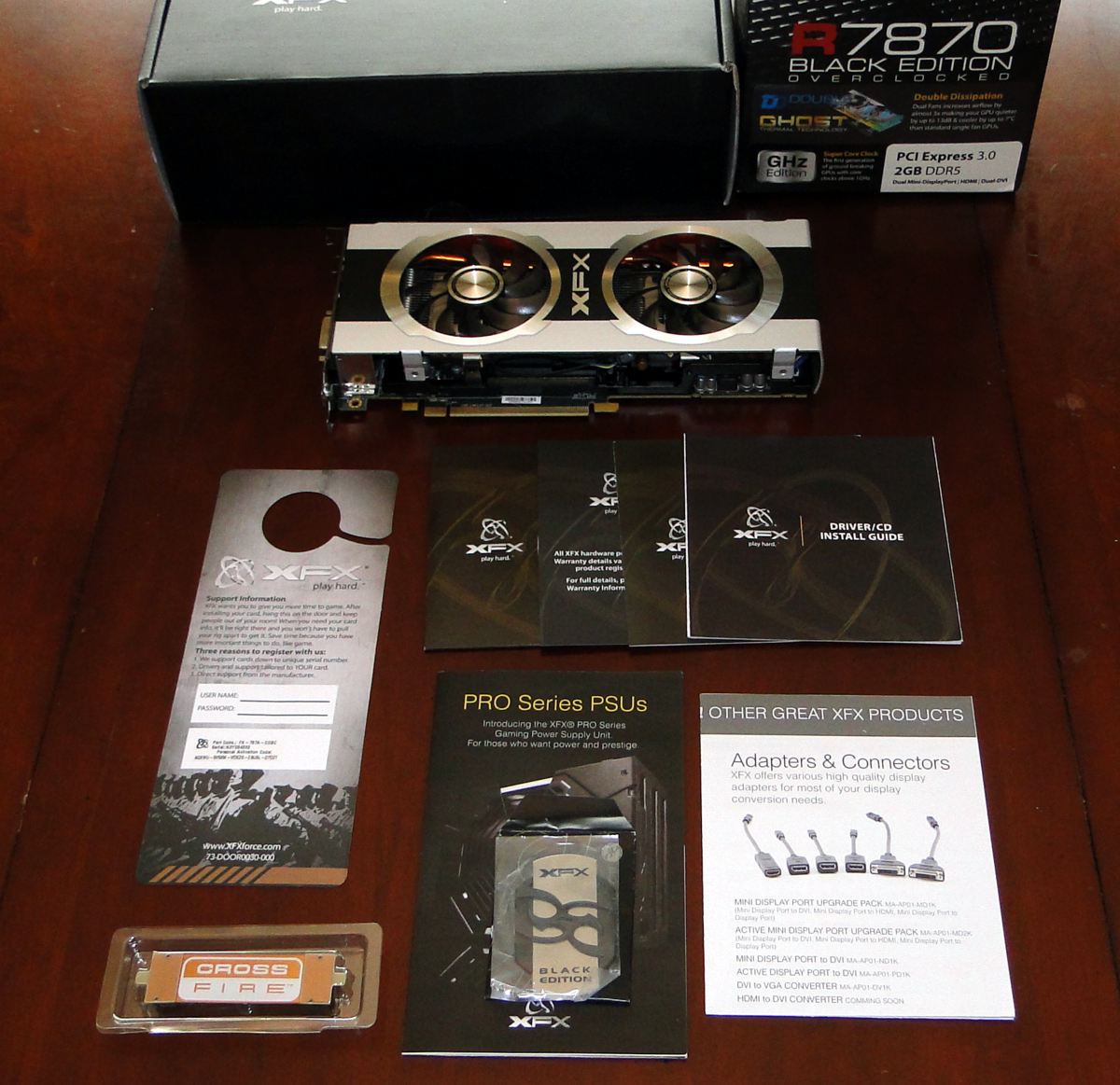 A better view of the complete pack.  This is the R7870, but the 7850 is identical in terms of boxing and packing.

The heatsink is a totally new design that features four heatpipes spreading out to a large array of aluminum fins. The design features smaller 5 mm heatpipes rather than the larger 8 mm units that some of their competitors use. The array of fins is not nearly as densely packed or as fine as the units we see from MSI and their Twin Frozr designs.

For these Black Edition products XFX is claiming that the actual GPUs being used are among the top 1% of binned chips. This means that they can achieve higher clockspeeds while requiring less voltage. This may or may not improve overall overclocking capabilities, but it is a start. At the manufacturer set overclocked speeds of these products, they should consume less power than a reference board clocked at that same speed.

AMD’s GCN architecture is a big improvement from the previous VLIW5/4 based products that were introduced with the HD 5000 and HD 6900 series of cards. This new architecture improves overall efficiency in both games and general computing applications. These are among the first widely available products based on TSMC’s 28 nm HKMG process, and AMD created a nice lead for themselves against NVIDIA with the HD 7000 series of parts. 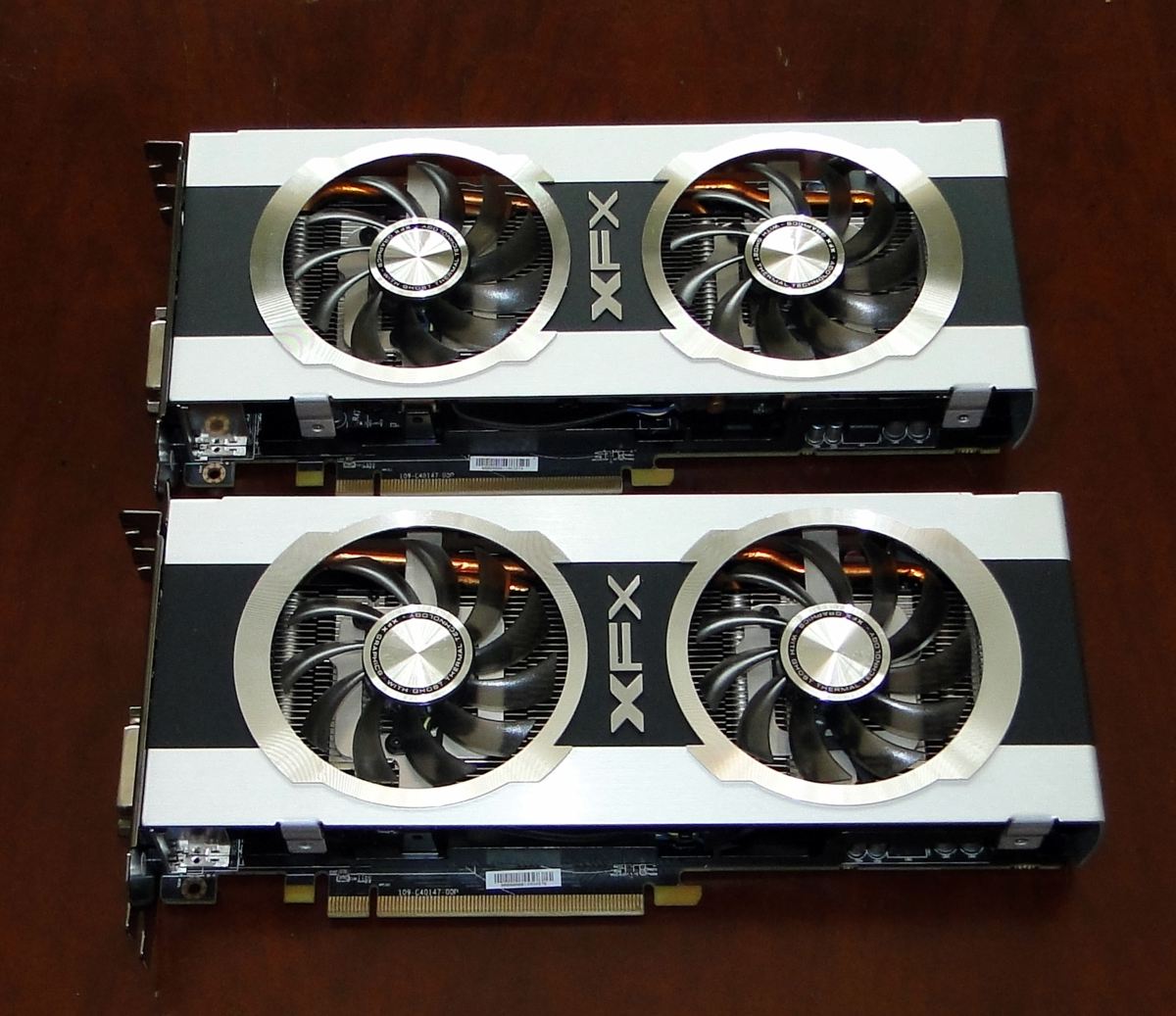 The two cards are identical, except for the branding on the top portion.

AMD has pretty robust support for OpenCL 1.2, Microsoft C++ Amp, and DirectCompute 11. The performance of these parts in GPGPU type applications is going to be much higher at the top end (HD 7900 series of cards) than the previous generations of AMD products. The HD 7800 series are somewhat crippled when it comes to double precision operations. It looks to have about 1/8th the throughput of a theoretically fully functional chip. If a user wants to have faster double precision performance, then they should consider looking at the HD 7900 series of cards.

The fully functional HD 7870 features 1280 streaming processors running at 1GHz. The HD 7850 is partially disabled and features 1024 cores running at 860 MHz. These are DirectX 11.1 and OpenGL 4.2 compliant parts. These are also among the first PCI-E 3.0 compliant parts on the market. The CPU/memory can communicate with the GPU at a theoretical 32 GB/sec.

Each 7800 class GPU supports 2 GB of memory on a 256 bit bus. The stock speed of the memory is 1200 MHz (4800 effective) giving it a bandwidth of 153.6 GB/sec. There is quite a bit of wiggle room with this specification, and we are more likely to see cards with higher capabilities here.

I really appreciate the output options that XFX has included with these cards.

A single card can support up to four monitors with a maximum of 16Kx16K resolution. These cards are 4K ready when those monitors eventually make it out. It is of course questionable if these cards can adequately support gaming at that resolution. The audio functionality out of these cards is actually quite good, supporting up to 7.1 sound and all HD audio formats.

The chips include PowerTune support which allows the GPUs to scale up and down in clockspeed dependent on the TDP of the chip in that application. It also features ZeroCore Power which turns off the GPU when the monitor goes to sleep. Once the system is awakened, then the GPU powers back up.

The GTX 460 aims for the value crown