Today AMD is officially releasing their Brazos 2.0 parts. This is a case of good news/bad news for the company. The good news is that they have an updated product that is based on their very successful Brazos 1.0 platform and that particular part has sold over 30 million units and is included in some 160 designs. The bad news is that AMD did not improve the product dramatically over what we previously had.

While Brazos will not beat these Intel offerings in pure performance, they do match up nicely in terms of price and battery life.

It is well known that AMD cancelled their original Bobcat 2.0 28 nm parts last fall (Krishna and Wichita), and instead worked on improving the fabrication of the current Brazos APUs. Little is known as to why those original 28 nm parts were cancelled, but perhaps the overriding reason is that there simply would not be enough 28 nm production through the first three quarters of 2012 to enable AMD to adequately meet demand on these parts (all the while sacrificing higher margin GPU wafer orders on the 28 nm node). We also must consider that AMD could have been counting on GLOBALFOUNDRIES to have their flavor of 28 nm HKMG process up and running, which of course at this time it is not.

These new Brazos 2.0 chips are still manufactured on TSMC’s 40 nm process, but that particular process is very mature at this time. This has allowed AMD and TSMC to squeeze every last drop of performance and efficiency out of the aging 40 nm node, and in so doing has allowed AMD a bit more headroom when it comes to the Zacate APUs that Brazos 2.0 is based off of. The two new processors are the E2-1800 and the E2-1200. 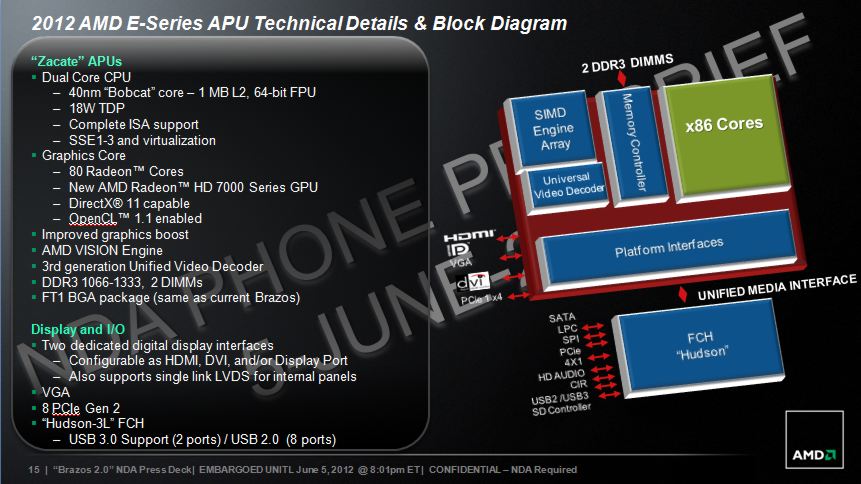 The same old Zacate that I used to know.  Just with a new dress!

The big change with Brazos 2.0 is that of the Fusion Controller Hub. The new unit packs in a few extras, and lowers the idle TDP by a significant amount. The old FCH (Hudson M1and M2T) ran at about 900 mw at idle, and the new Hudson M3L takes it down to 750 mw. The M3L adds SATA-6G support which was lacking in the mobile oriented Hudson M2T, and it also adds in two native USB 3.0 ports as well as an integrated SD card reader (neither of which were featured in the Hudson M1).

Taken together, these are slight changes to an already popular platform. Users should next expect a new level of performance from these parts, but they are slightly faster and are slightly more efficient. This means a bit more work done on a bit more battery life, all at a low price courtesy of small and nearly dirt cheap APUs and FCHs. AMD will eventually migrate this platform to 28 nm products, but that will not occur until well into 2013. So throughout the rest of this year, Brazos 2.0 will be gunning for users’ dollars in the low budget, high efficiency computing niche.