Today we received a number of photos from ASUS that show off some upcoming hardware from their upcoming Republic of Gamers line. Except for the Xonar Phoebus (which has launched), the hardware in these photos is not yet released and ASUS has not revealed when it will be available for sale – or how much it will cost. Still, I can’t think of a better way to start the day than getting a glimpse of some shiny unreleased hardware – especially when I get to share it with you!

First up is a new Replublic of Gamers motherboard called the Maximus V Extreme. This board is similar to the mATX Maximus V GENE board that was announced recently, but the Extreme motherboard is full ATX.

While full specifications are unknown, from the photo you can see that the board has an LGA 1155 socket, making it compatible with the latest Intel Ivy Bridge processors. Further, it is sporting four DDR3 DIMM slots, five PCI-E 3.0 x16 slots, and one PCI-E 3.0 x4 slots. Other features of the board include ASUS’ Extreme Engine Digi+ II digital power control technology, power and reset buttons on the board itself, voltage check points, Lucid Virtu MVP GPU virtualization technology, and AMD CrossFireX and NVIDIA SLI support. The VRM area and southbridge area of the board is covered by large black and red heatsinks.

In addition to the ASUS Maximus V Extreme, the company is producing the Maximus V Forumula motherboard, which is then further available with or without the ThunderFX audio accessory. The Formula board is another socket 1155 board with a red and black color scheme that is ready for Ivy Bridge processors and multi-GPU setups (SLI or CrossFireX). The heatsinks on the formula are a little less beefy than those on the Maximus V Extreme, but the VRM heatsinks are ready to be integrated into a water cooling loop. Further features include four DDR3 DIMM slots, eight SATA connectors, three PCI-E 3.0 x16 slots, three PCI-E 3.0 x1 slots, and a single PCI-E 3.0 x4 slot. 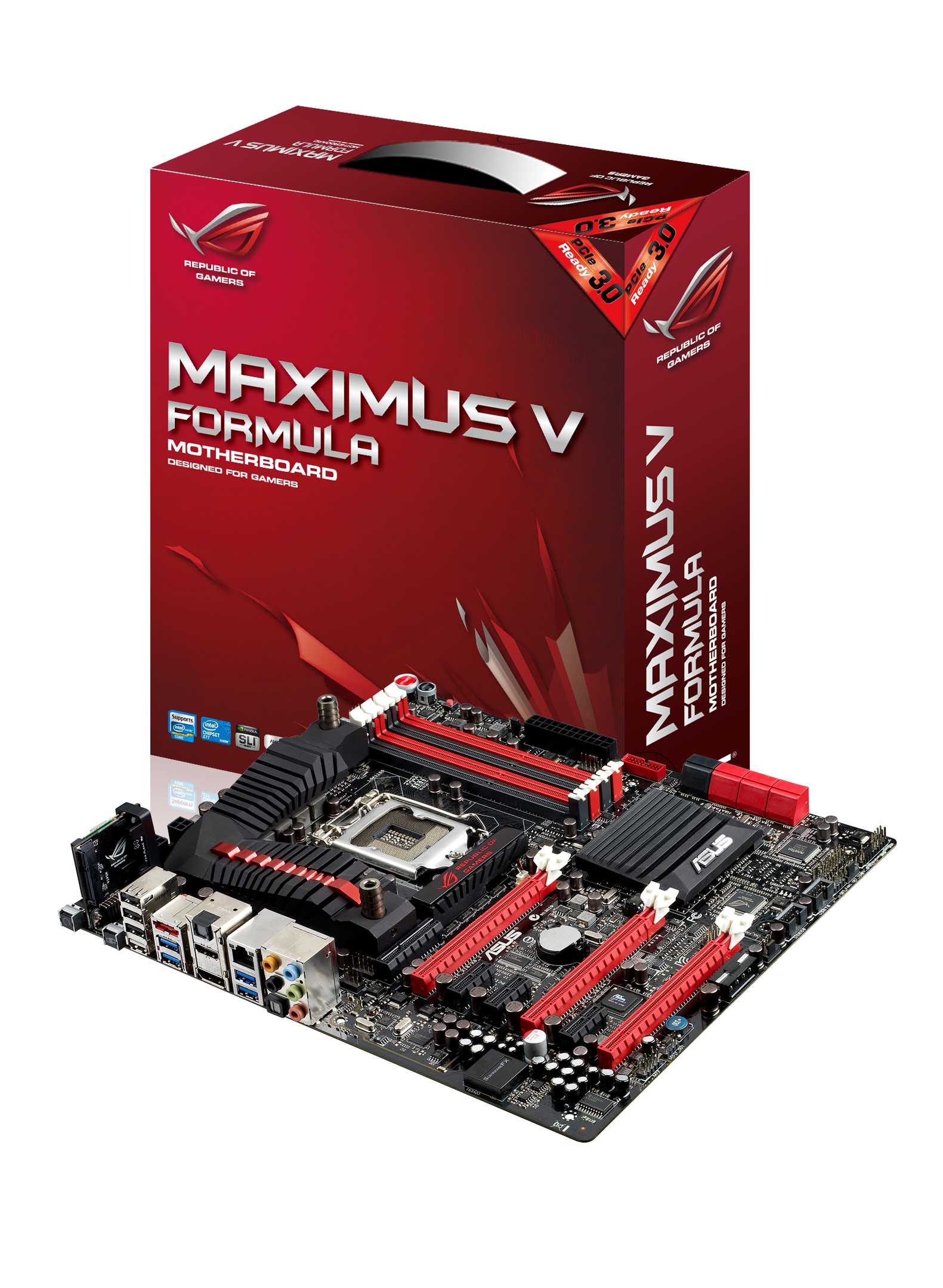 The board also features the SupremeFX integrated sound card (which has been isolated from the rest of the board by routing the wiring through its own PCB layer) and a mini-PCI-E + mSATA combo card. One version of the motherboard also comes with the SupremeFX accessory which you can see in the photo below. 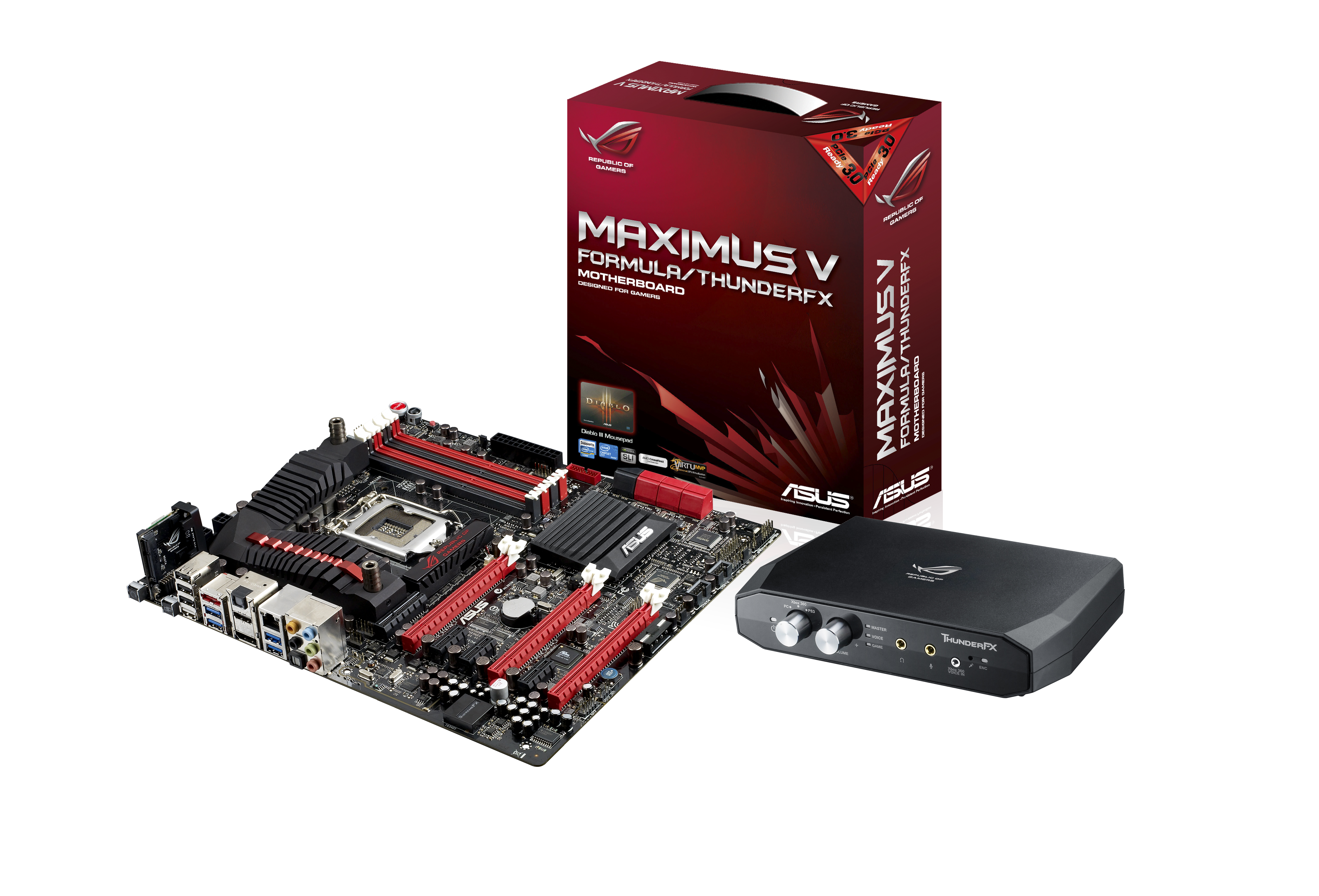 The Maximus Extreme V Formula comes with a device called the ThunderFX that is a high end headphone amp and DAC offering 120dB SNR, and noise cancellation technology.  The included GamEQ comes with three preset profiles but also offers you a wide range of options to tweak your sound to your own desires.  There is also onboard audio in the form of the SupremeFX IV audio chipset which will keep those who prefer speakers more than happy with their audio quality.

You can also see that the large anodized aluminium heatsinks have barbs for you to include them in a watercooling loop so that all components on your motherboard can be cooled without resorting to fans to move air.  GameFirst II is the name ASUS has given their networking software and it is designed to examine an prioritize packets to reduce lag and ping times.  It comes with both an EZ Mode as well as offering advanced options for those who know what they are doing.  As we have seen on other boards, the Maximus Extreme V Formula comes with a mPCIe Combo card with dual-band Wi-Fi and Bluetooth 4.0.  This board is also shattering records in Super PI 32M, 3DMark05 and Heaven to name a few.

Check out more from ASUS from Computex including ROG graphics cards, audio devices and laptops!!

The following graphics card is a Republic of Gamers Matrix 7970 with 3GB of GDDR5 memory. With a dual fan cooler and heatpipe-assisted aluminum fin array, users can expect the card to have the potential for good overclocks. The card is a massive three-slot design that includes two DVI and four full size DisplayPort ports for video output. 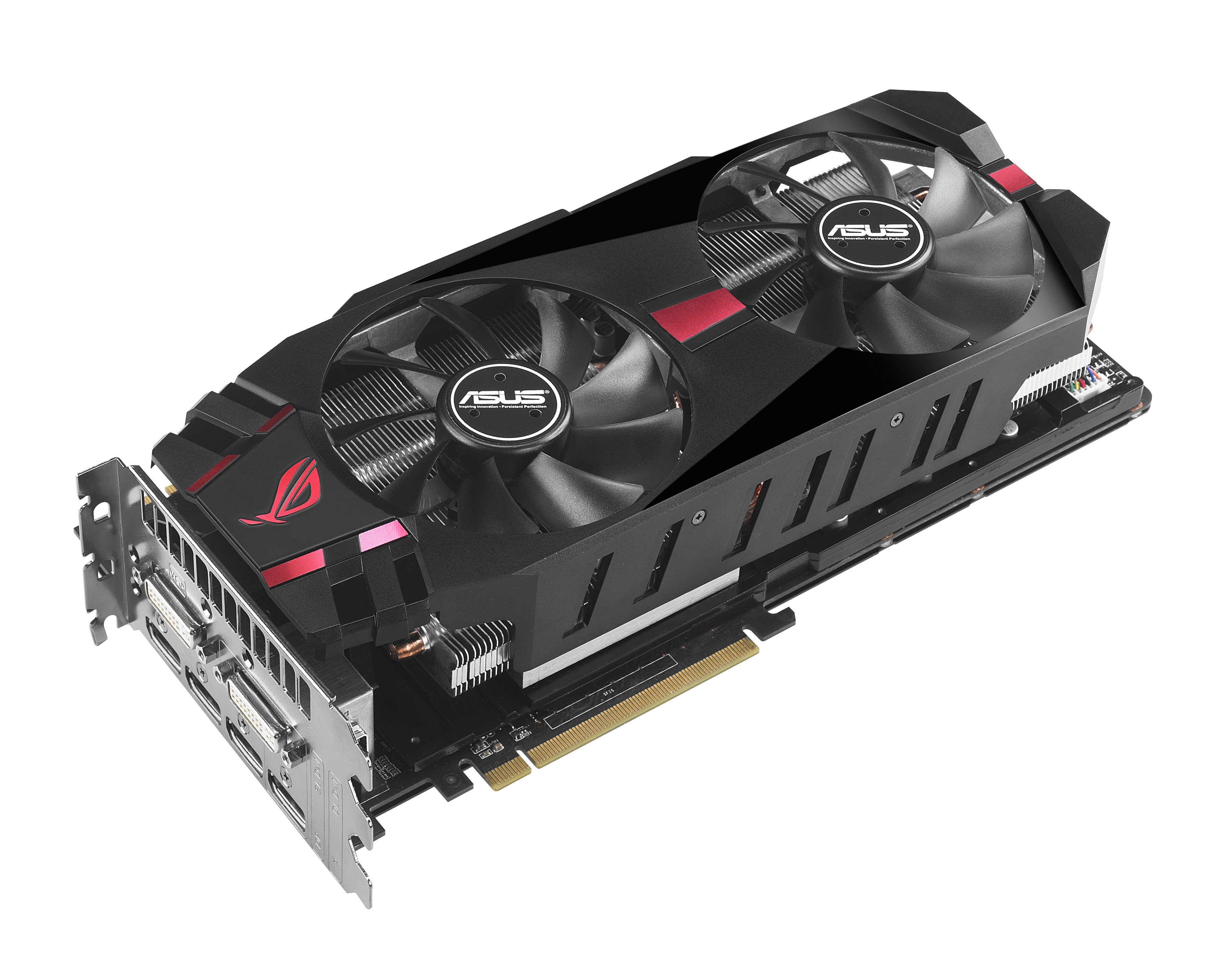 ASUS is working on two gaming headsets, the USB based ORION series and the analog Vulcan Pro ANC. Both headsets are closed ear circumaural designs with what looks to be a leather-like material over the ear cups and headband. The ORION headset is all back with red accents around the ear cups and padding over the drivers. The headband further sports both the ASUS and Republic of Gamers logos. The microphone is retractable and extends from the left ear cup which the USB cable also attaches to. 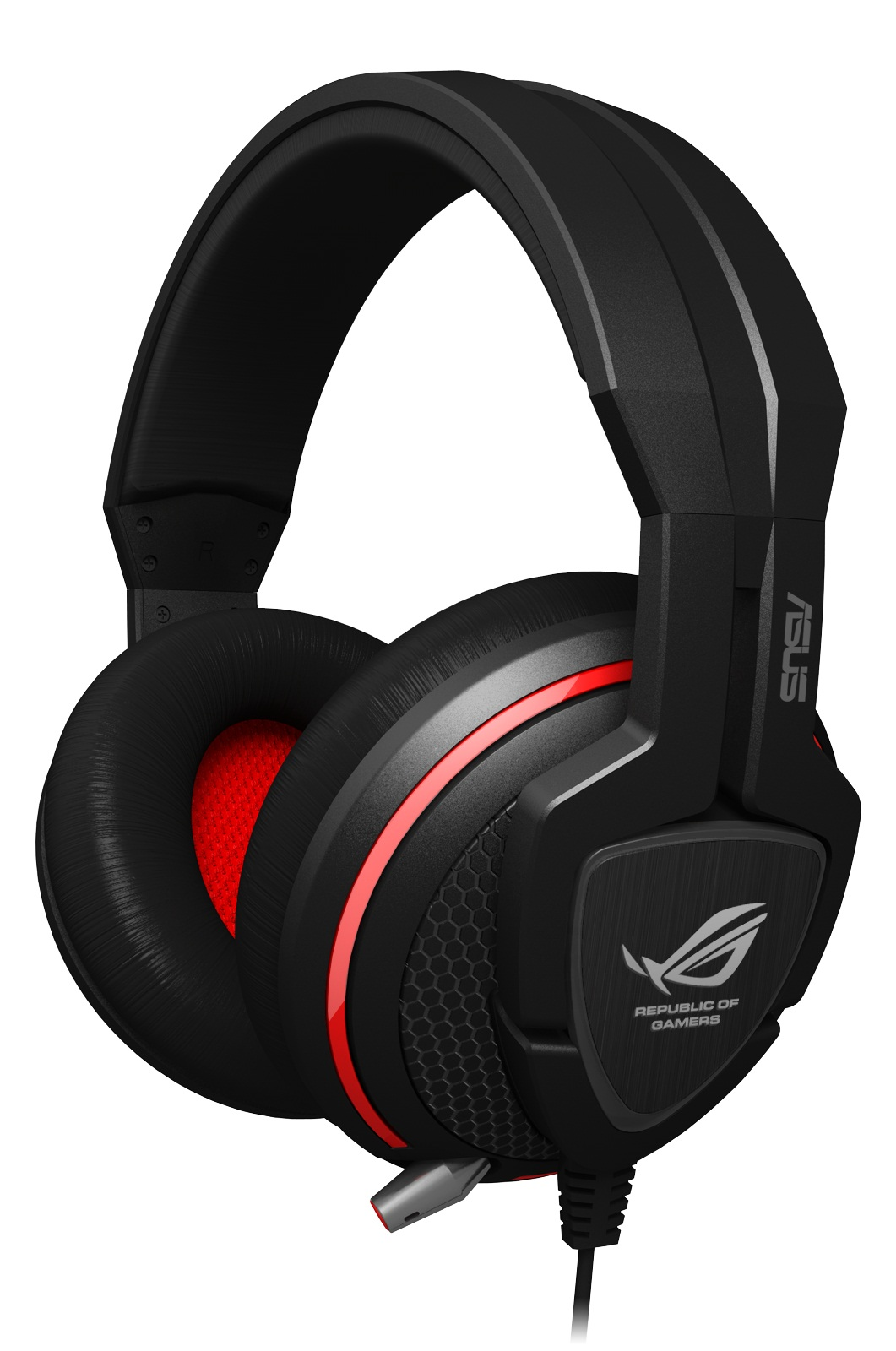 Meanwhile, the Vulcan Pro ANC is an analog headset that has a sleeker headband design with more chrome-like accents in the form of the ASUS of ROG logos. The headset keeps the red and black design of the ORION but there is more red in the Vulcan Pro. Also, the microphone does not retract into the left ear cup, rather it is an extended boom microphone. From the photo, it does not look like it is able to swivel but it is hard to say if that will be the case in the final design. 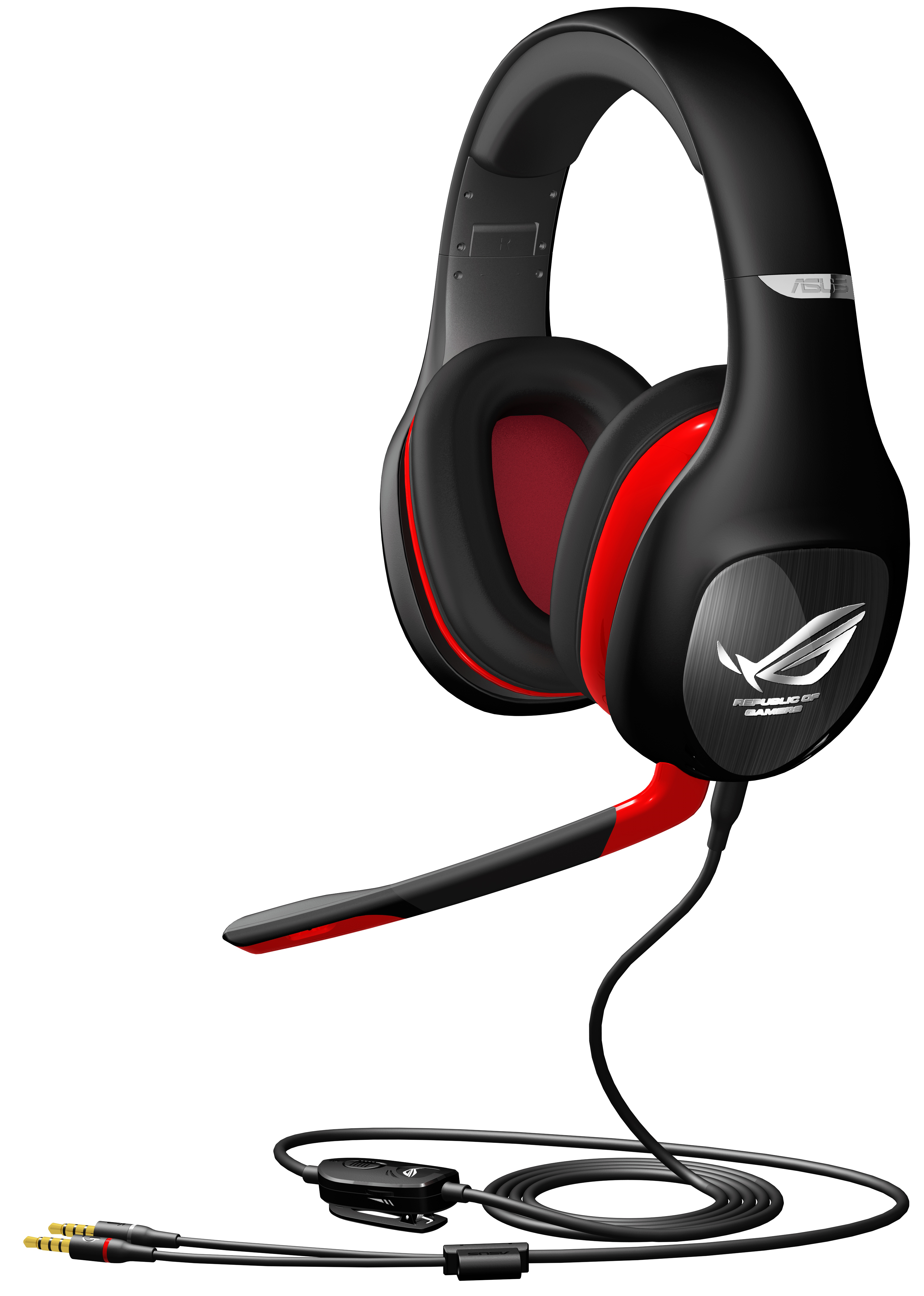 Both headsets will feature braided cables and in-line control pods. 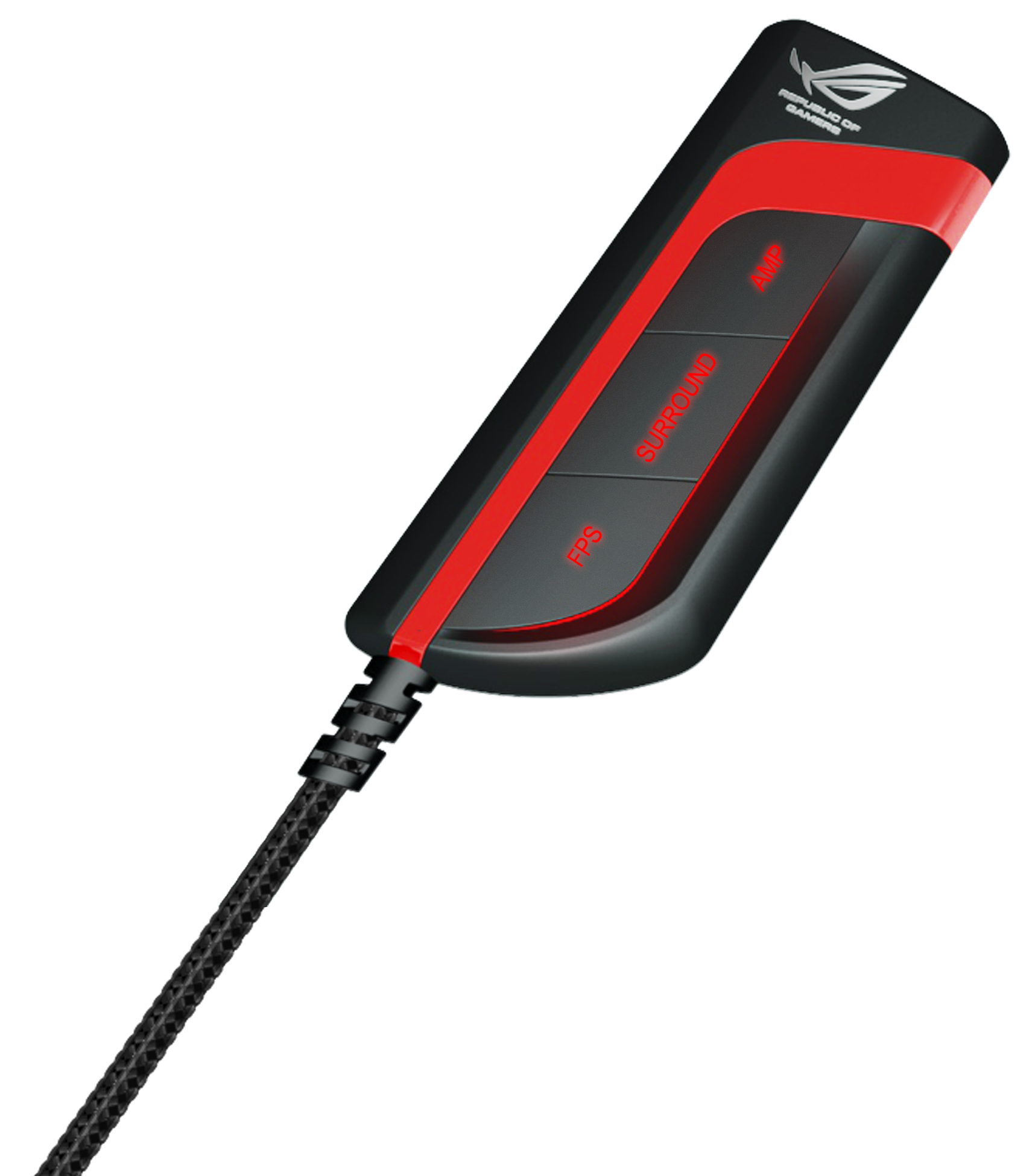 We saw the Xonar Phoebus at CES, and we have a new photo below. The Phoebus is a PCI-E sound card that is built to drive headphones up to 600 Ohms of resistance and has a signal-to-noise ratio of 118dB. The card is further shielded to block EMI interference from other computer components in the system. The device attached to the sound card is the control pod which controls volume, has microphones that are used to eliminate background noise from VOIP calls, and is packing Dolby Home Theater V4 surround sound and GX3.0 gaming engine technology. It has since been released and gamers can find the set online for around $200 USD. 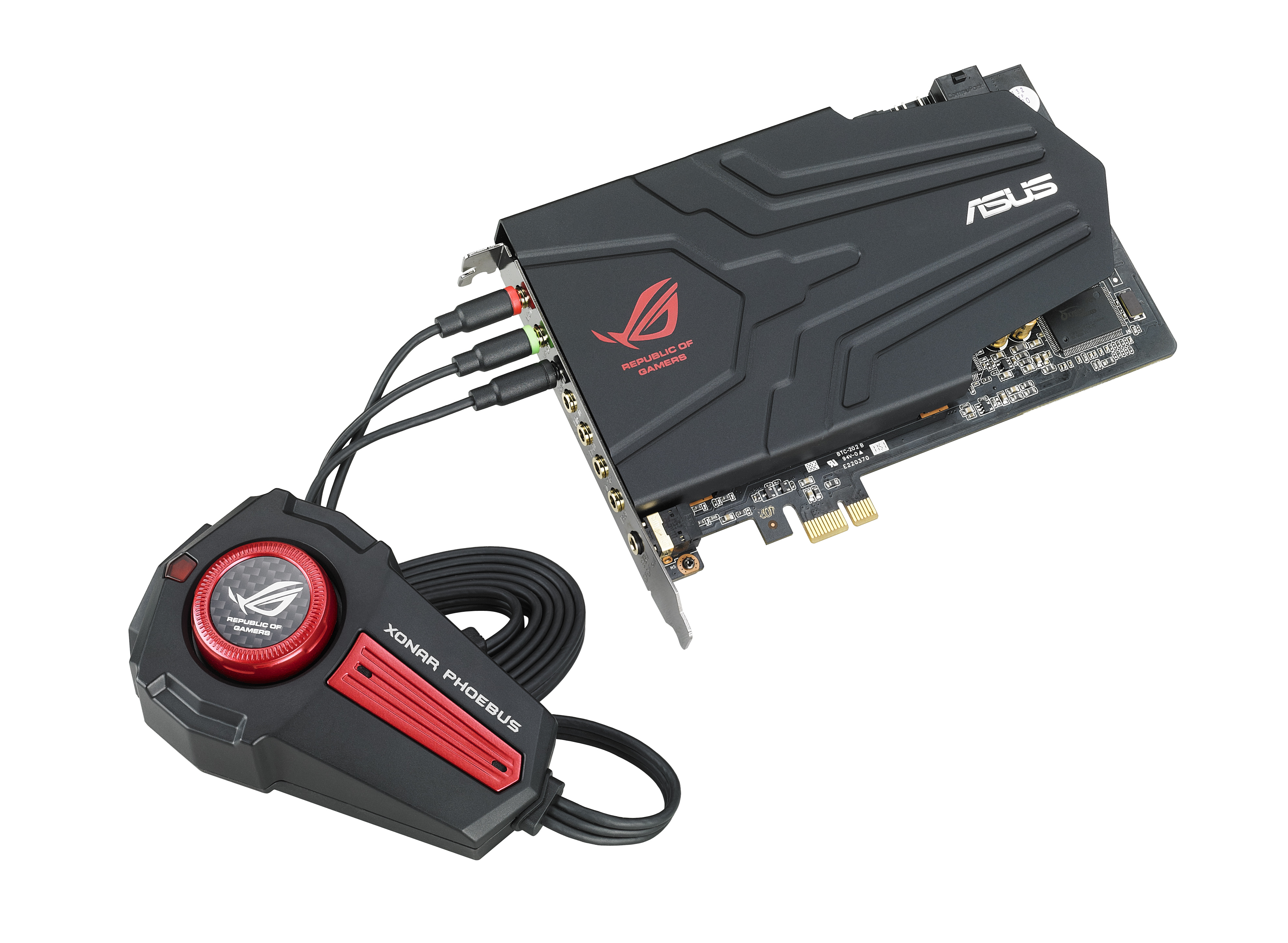 The final photo we received was for an Asus Republic of Gamers branded laptop. the gaming laptop has a metal-textured dark gray appearance and features a large display and a full keyboard with numpad. The computer also has a slim DVD drive, at least two USB ports, mic in, headphone output, and a SD card reader. 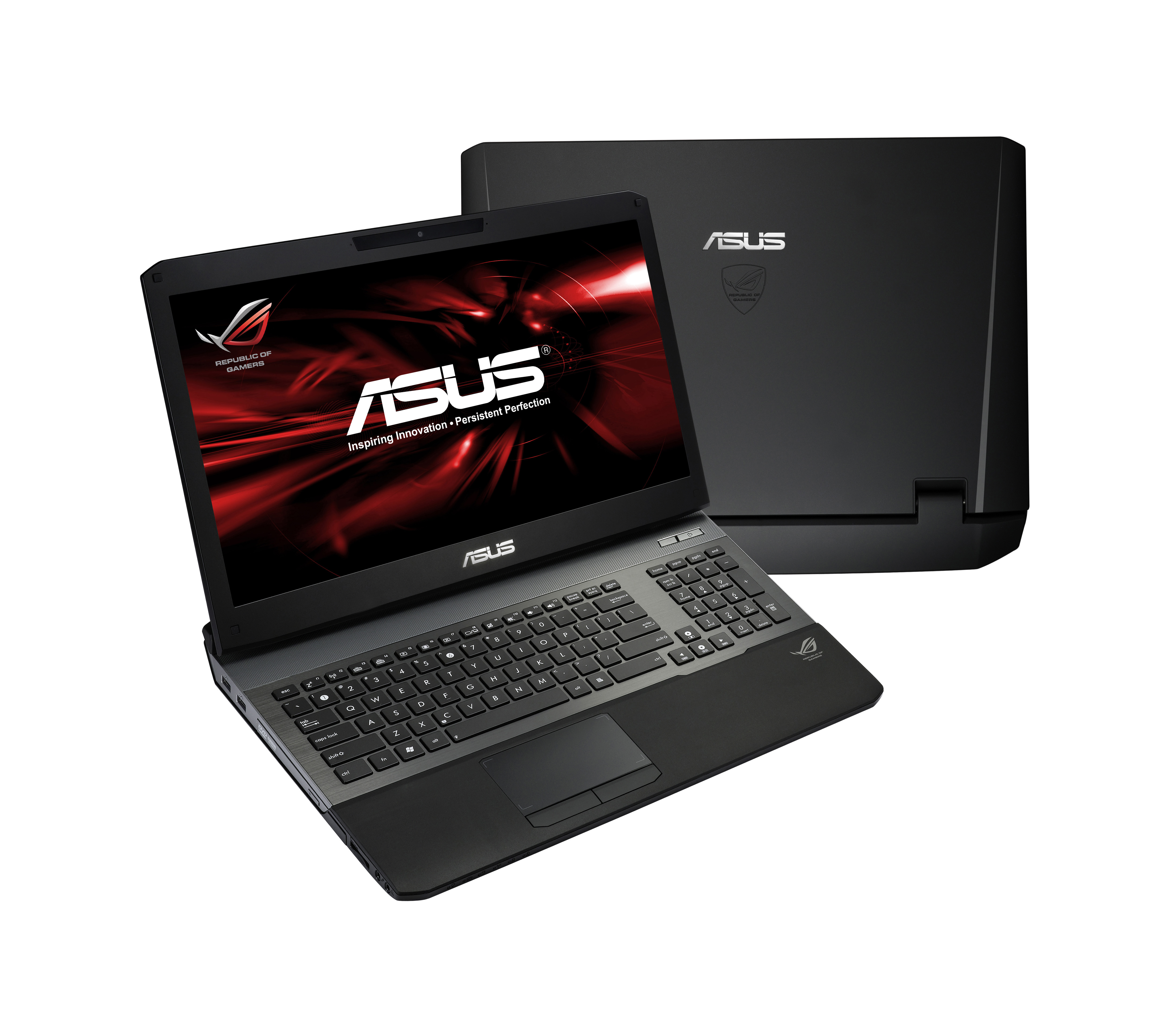 That is certainly a lot of new hardware to take in all at once, but it looks like ASUS has a lot planned for 2012. Stay tuned to PC Perspective as we cover Computex 2012 and learn more about the ASUS hardware! 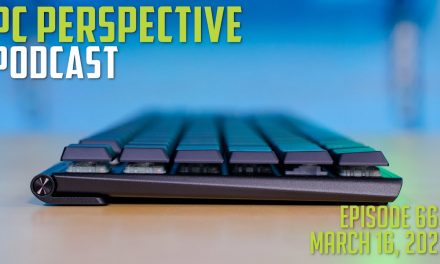