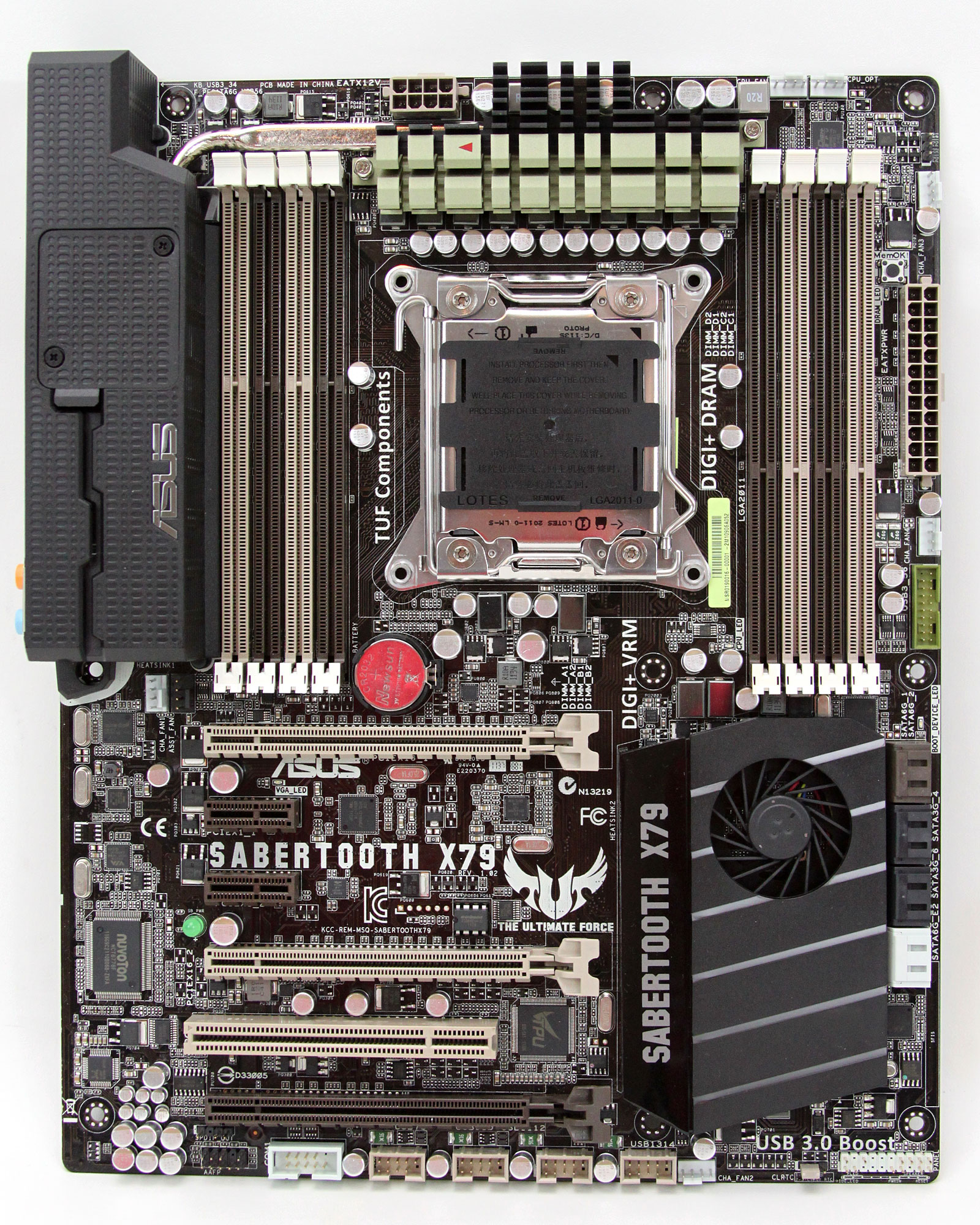 The technical specifications are pretty impressive, but nothing compared to seeing the Sabertooth X79 in person for the first time. The edgy, military feel of this board should compliment a rugged and tough PC gamer who prefers Call of Duty: Modern Warfare 3 and Battlefield 3 over Team Fortress 2 and Left 4 Dead 2.

The actual layout of all the features and components is pretty standard when you put it side by side other X79-based motherboards, but ASUS did a couple unique modifications that users should take note of. ASUS created a low-profile heatsink and fan to cool the X79 chipset and created another green anodized aluminum heatsink and heatpipe to route heat away from the power components to exhaust it out the back of the case over the back I/O ports. 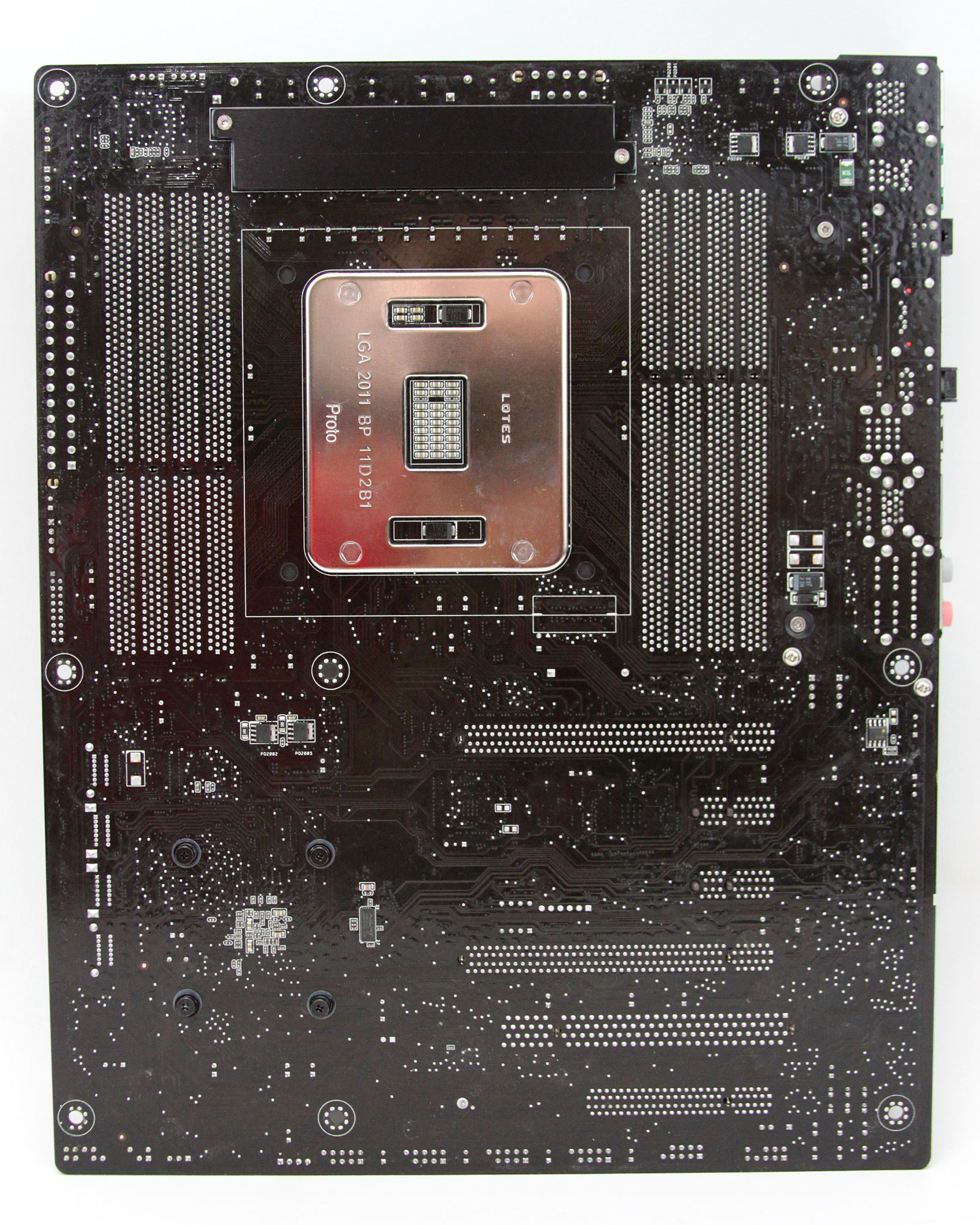 The back of the PCB resembles every other motherboard I’ve seen and includes a small aluminum backplate behind the CPU socket. 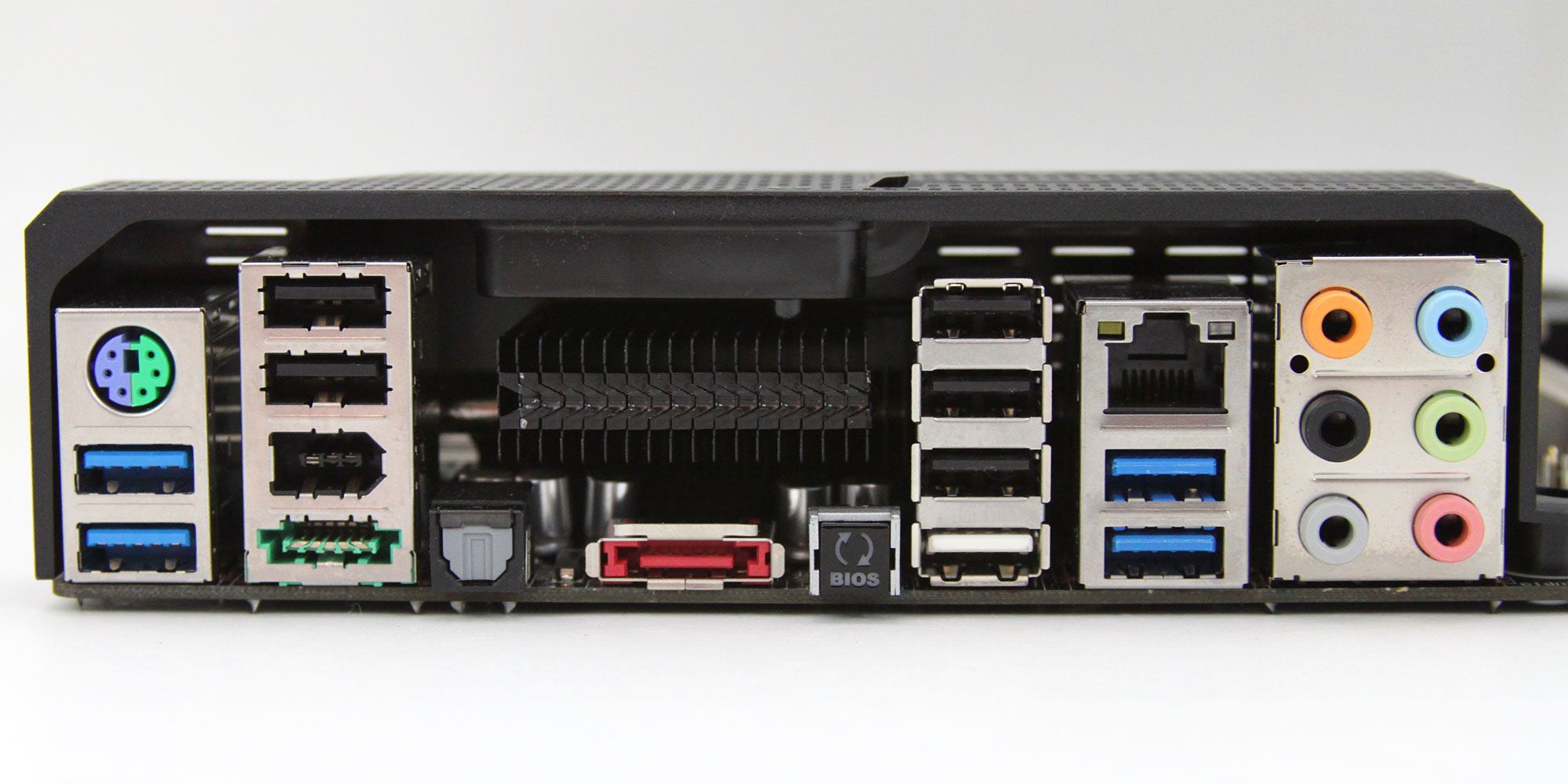 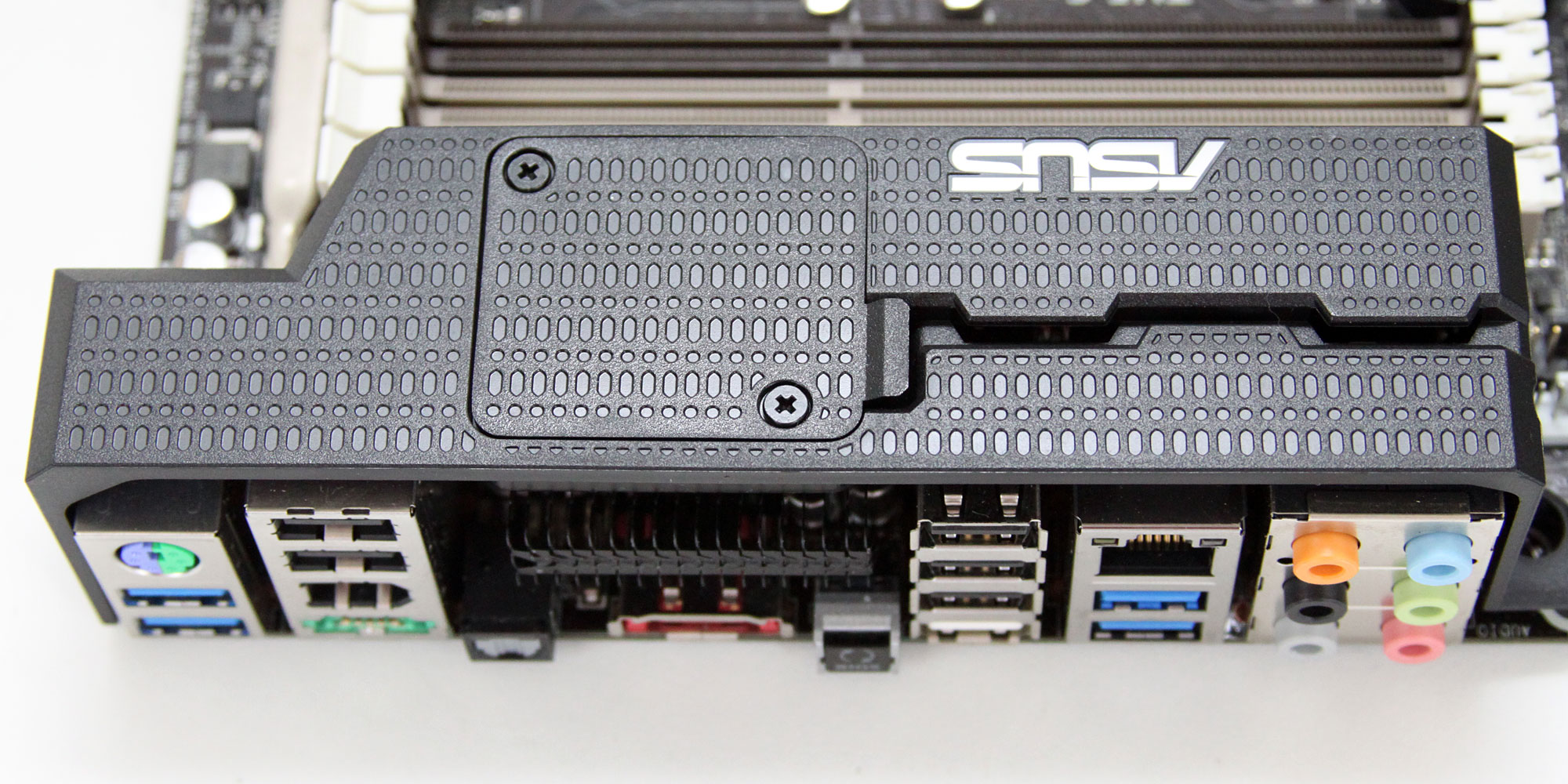 ASUS encased the back I/O panel in a black, plastic schroud that houses a small fan and aluminum fin array that exhausts heat from the power components above the CPU socket. This feature is part of ASUS’s Thermal Armor technology that directs heat away from MOS area components and out the rear I/O section. 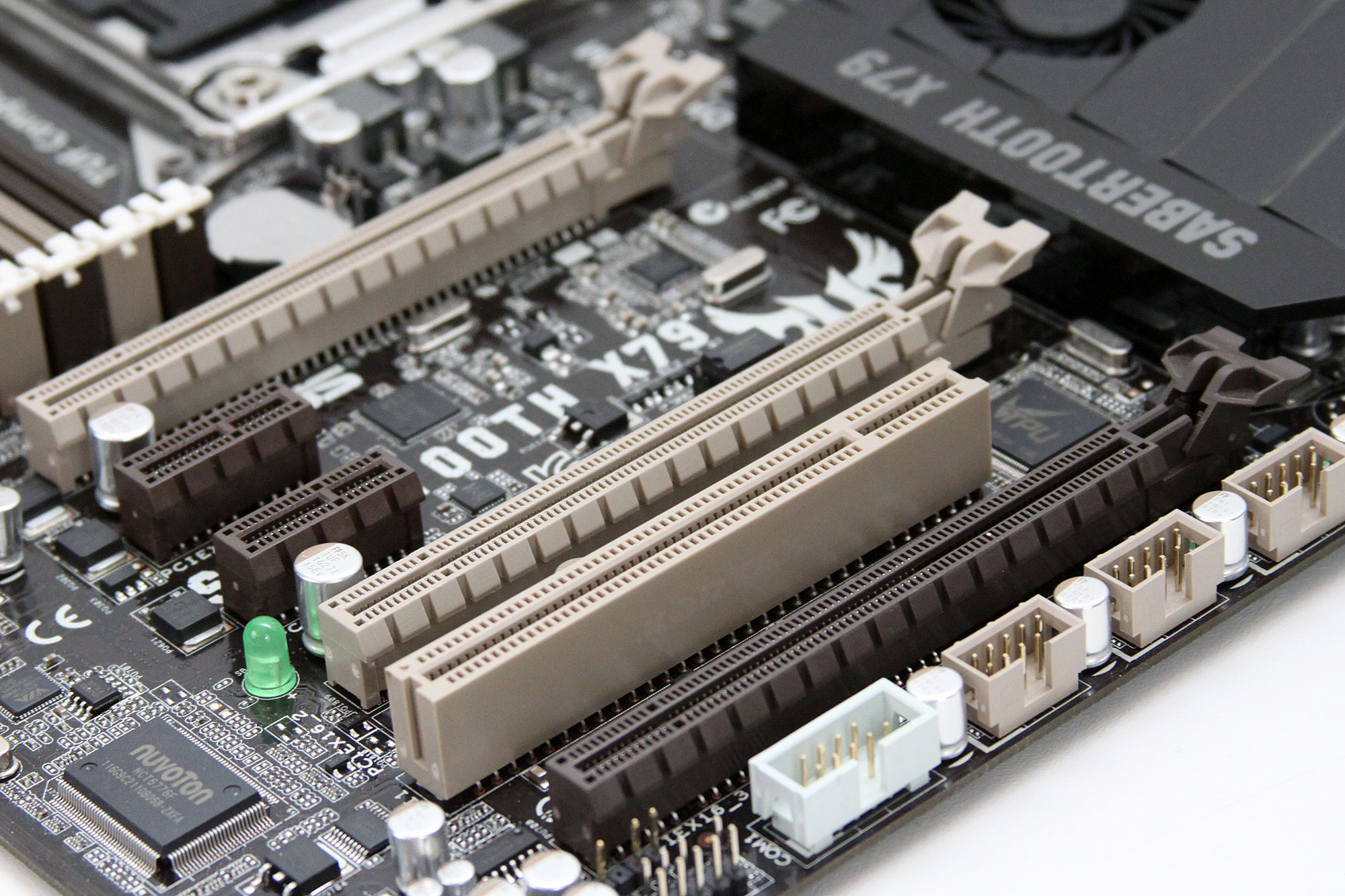 One of the key features, beyond the military-grade power components and other upgrades, that users will look at is the Sabertooth X79’s three PCIe 3.0 x16 slots that support quad-GPUs in both SLI and CrossfireX graphics. They can be run in single x16, dual x16 or triple 16x16x8 configurations. These features help extreme gamers who will use dual video cards take full advantage of the board’s x16 speeds over both PCIe slots to get the sharpest high-resolution gaming capabilities available. ASUS also threw in two PCIe 2.0 x1 slots and a legacy PCI slot. 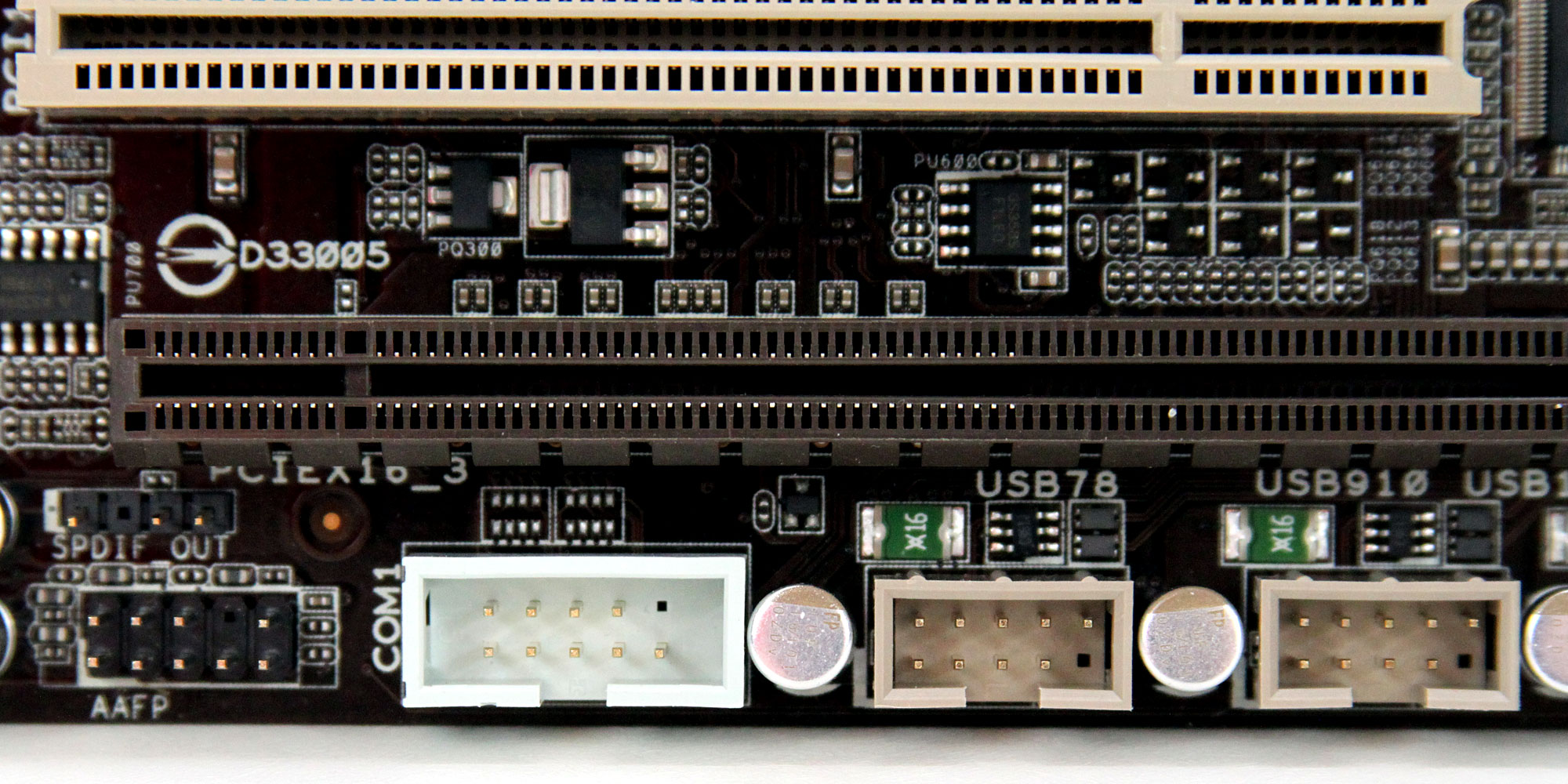 The bottom of the motherboard is lined with additional headers to support everything from USB 3.0 to legacy firewire devices. The photo above shows the board’s high-definition audio, communications, and two USB 2.0 headers. 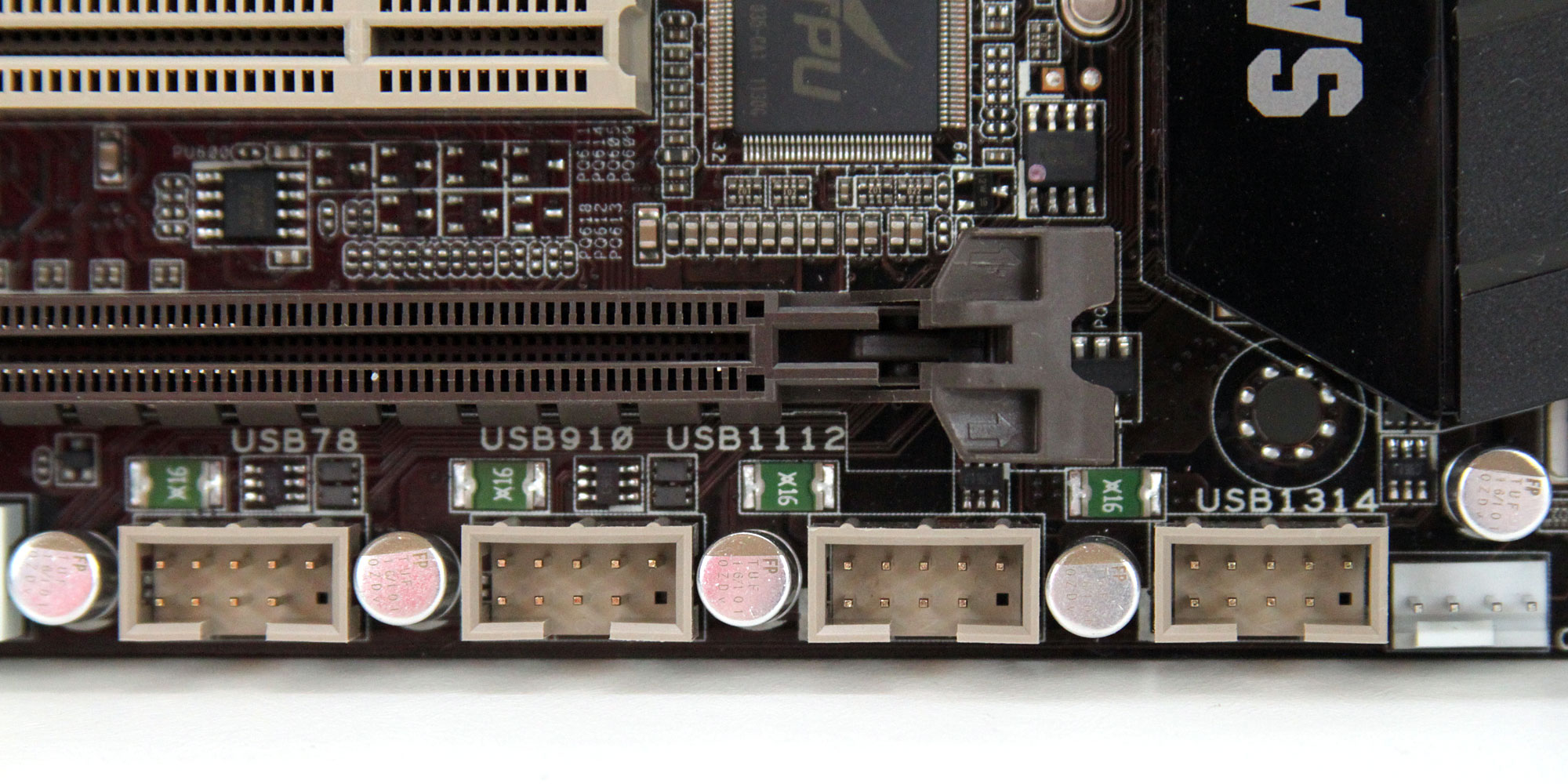 The Sabertooth X79 actually has four USB 2.0 headers that support up to eight USB 2.0 devices. ASUS also added six four-pin fan connectors to help users connect their system fans directly to the motherboard. The additional fan connectors also ensures these fans are managed by the system BIOS and ASUS’s third-party software that can be adjusted to the user’s specific cooling preferences. 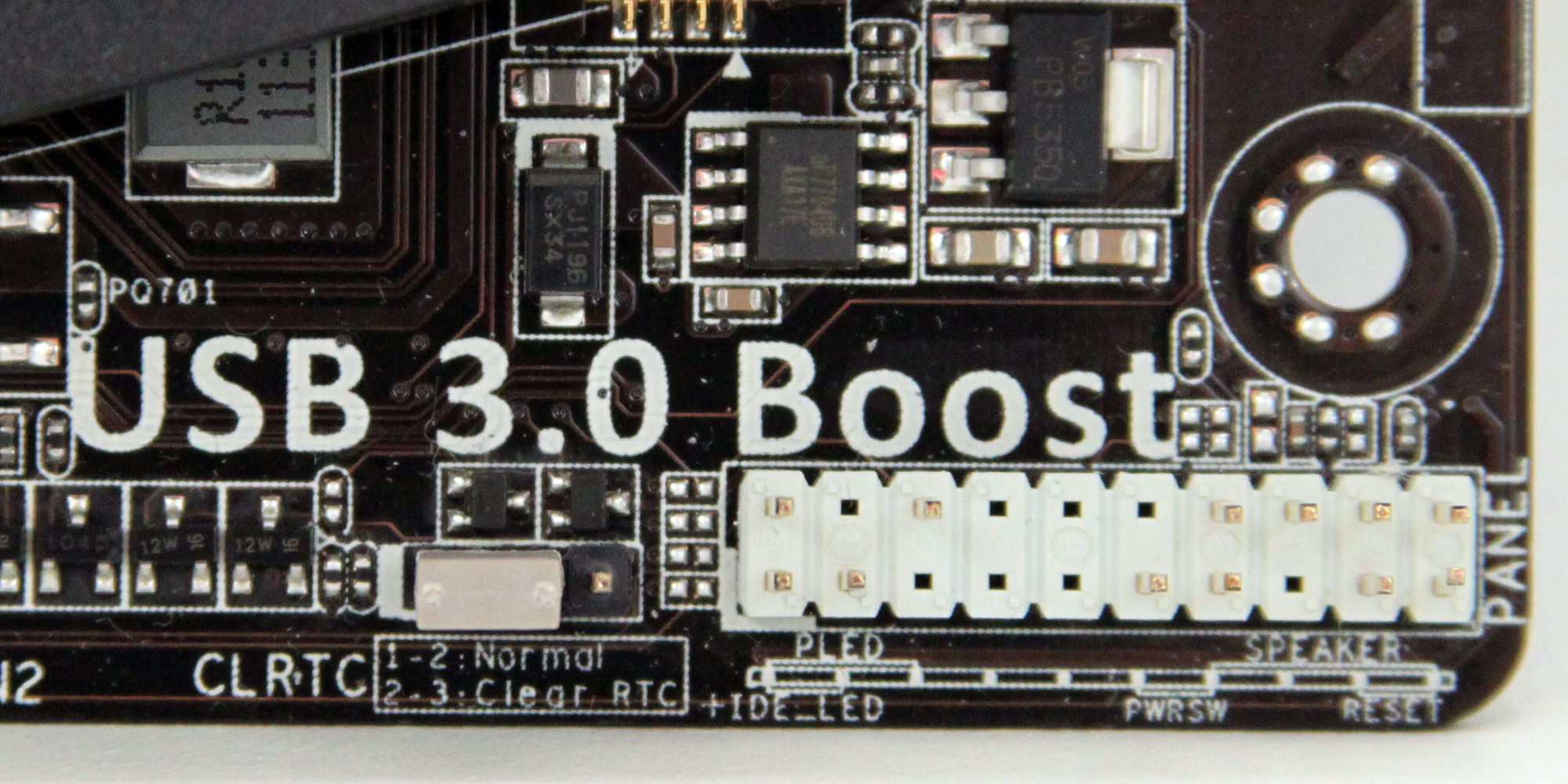 The front I/O header that manages the power button, reset button, power LED, HD activity, and speaker is located on the bottom right corner of the Sabertooth X79. While the header is not color coded, ASUS did add a simple legend to help users connect their front panel buttons and LEDs. There is also a small clear BIOS header that makes clearing the BIOS quick and easy. 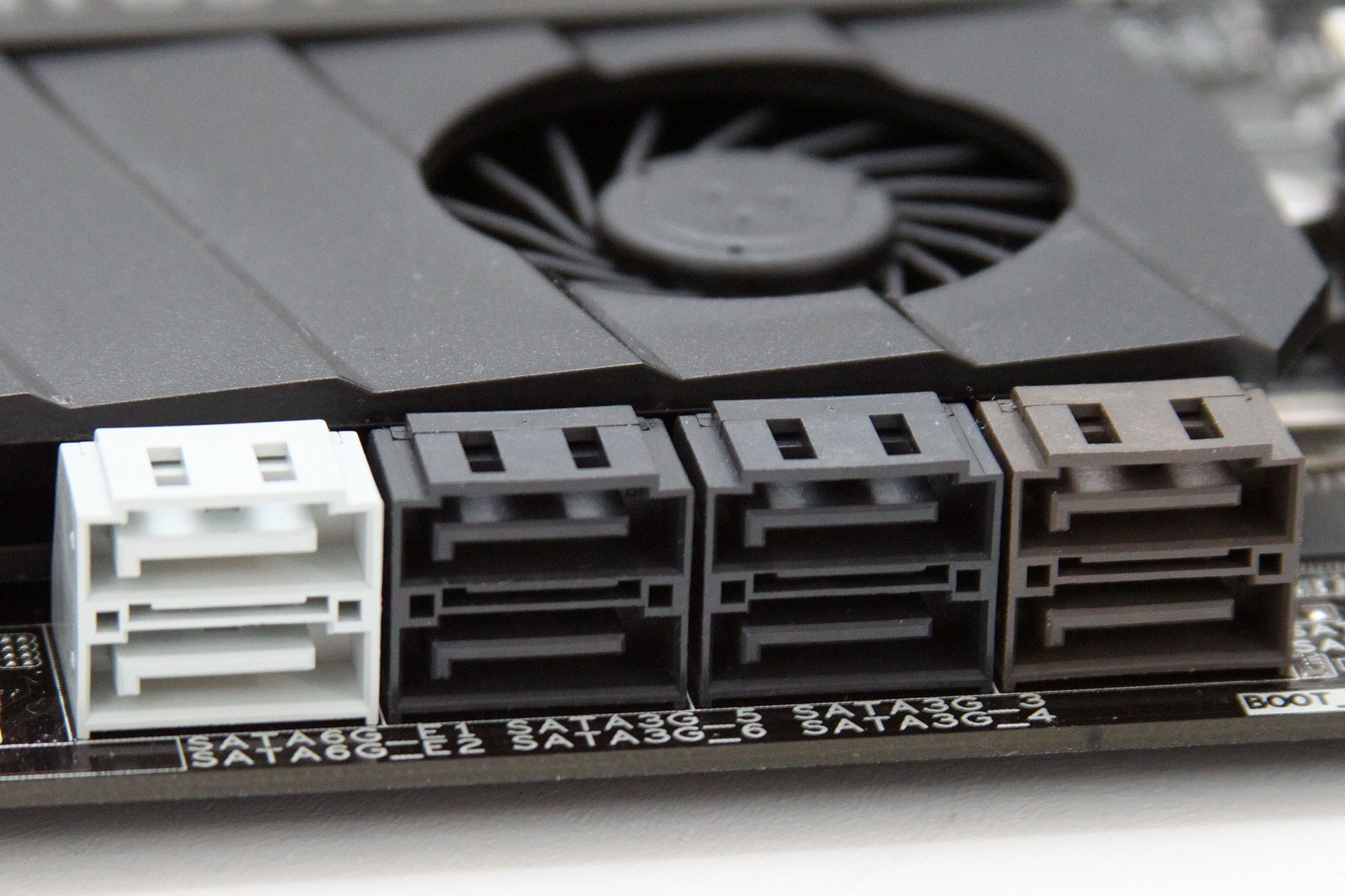 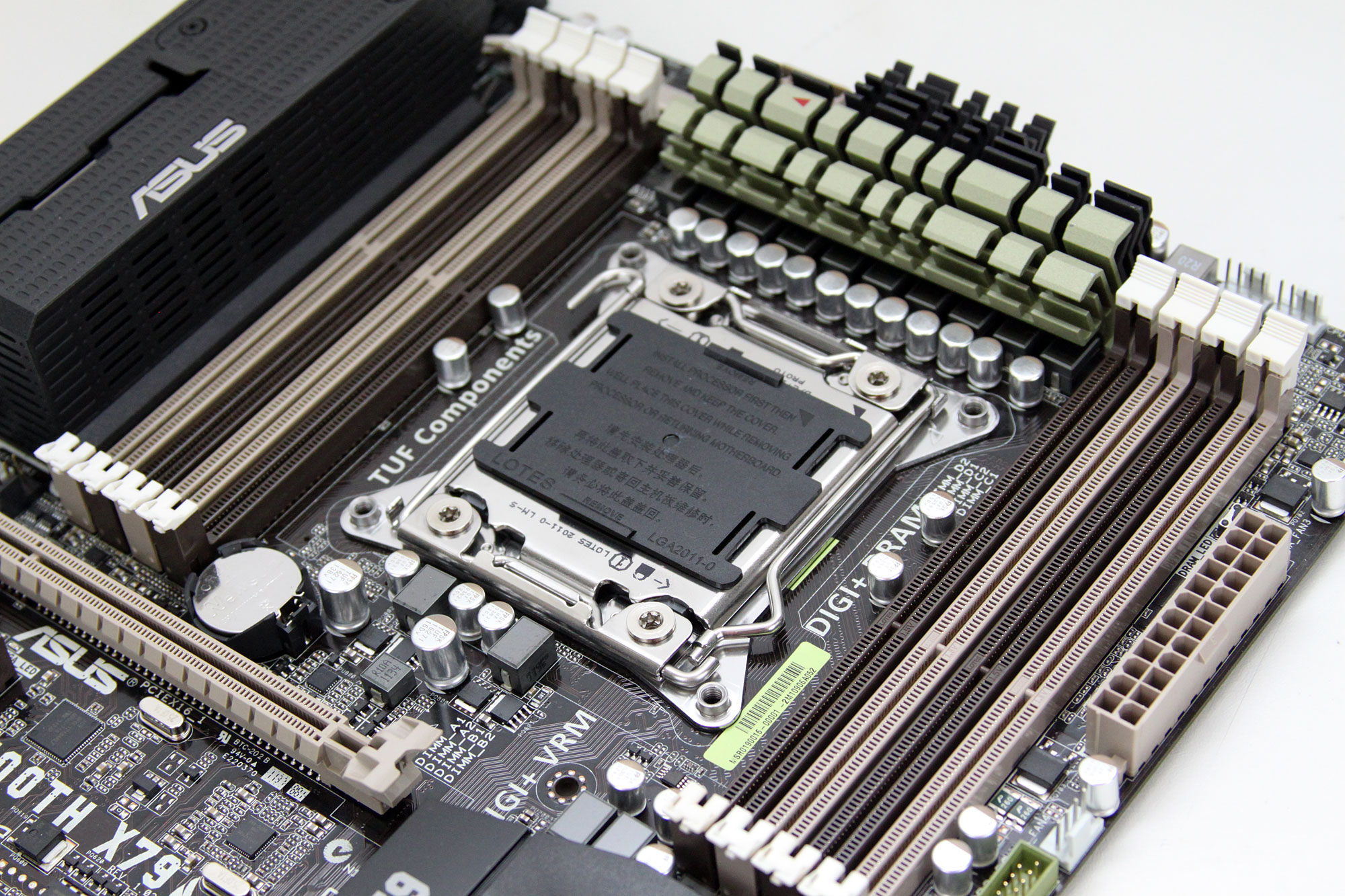 The Sabertooth X79 has eight DIMMs that support up to 64GBs of DDR3-1866, 1600, 1333, and 1066 MHz system memory. The memory ratings are a bit lower than other X79 motherboards that support up to 2133MHz, but most isers will purchase DDR3-1866 or DDR3-1600 because of the overall cost and minimal performance differences they will experience. The CPU socket is a bit cramped as well with the eight DIMMs and other power components surrounding it. We recommend users keep a close eye on how much clearance they will having using third-party heatsinks or other CPU coolers with large aluminum fin arrays. 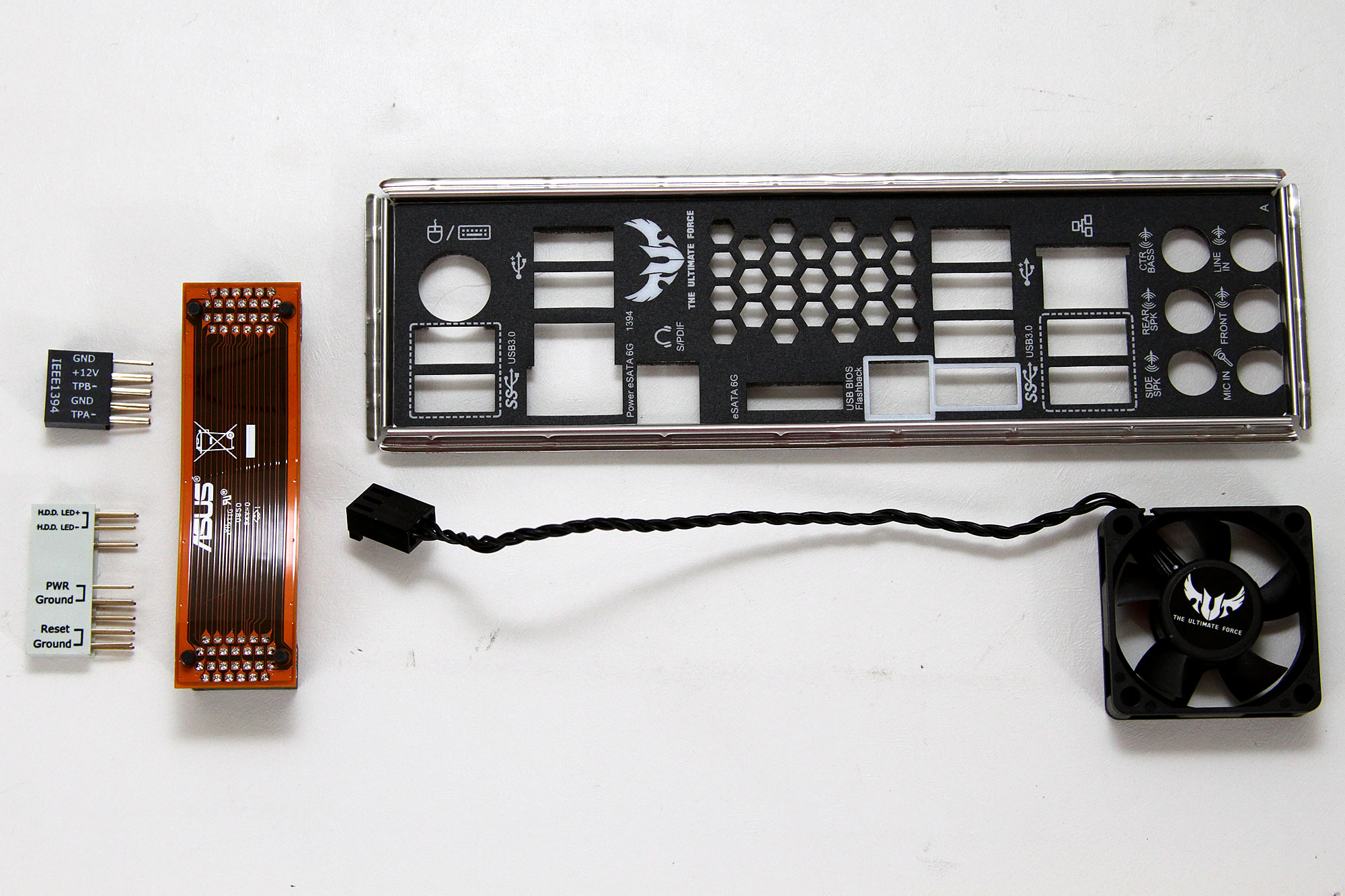 The bundled accessories that come with the Sabertooth X79 include an I/O cover fan, SLI bridge, quick pin connectors for firewire and front I/O panel buttons, and black back I/O backplate. 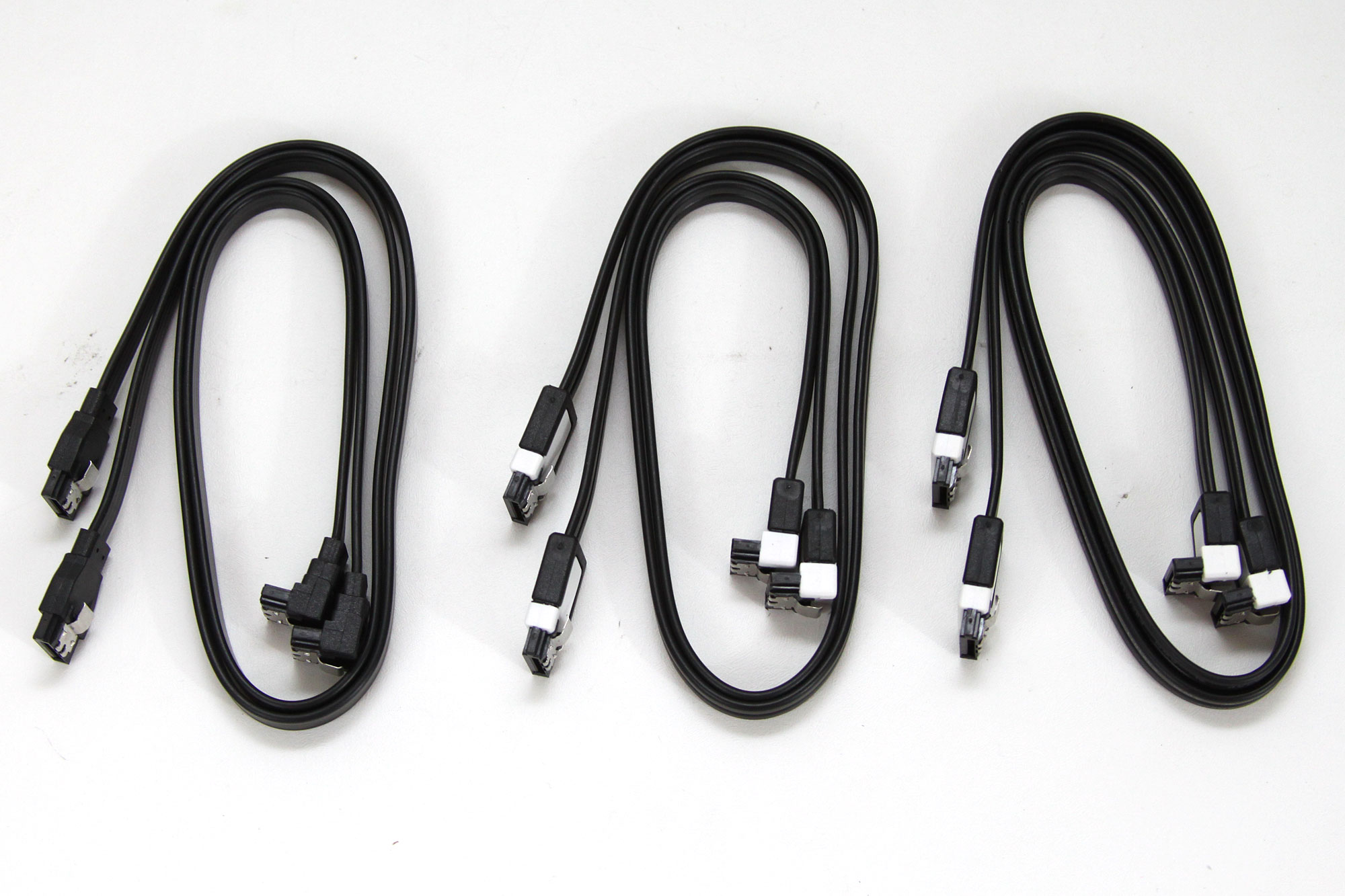 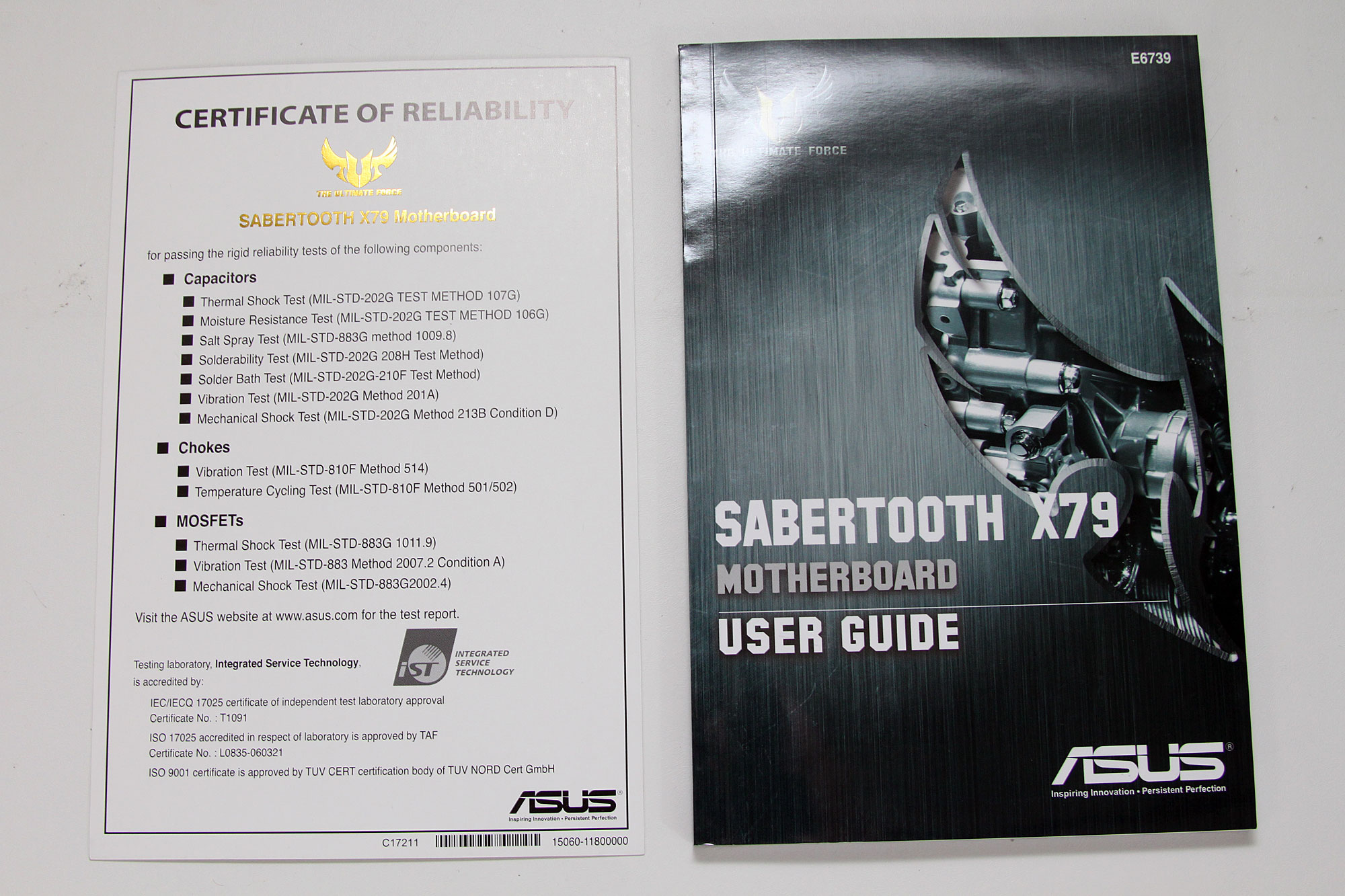 Lastly, ASUS included a certificate of reliability that discusses the features of their power components and a basic user manual to help people understand all the features and capabilities available with the Sabertooth X79.