ASUS has a history of showing off crazy high-end concept motherboards that are not likely to come to market but may help influence future motherboard products by getting the creative sparks of innovation flowing in engineers’ minds.

At this year’s Computex 2012, Asus showed off two concept motherboards that it is calling Zeus and Wolverine. While Zeus tackles Thunderbolt and integrated GPUs, Wolverine approaches the problem of getting clean power to the CPU by pushing the limits of the number of power phases that can be integrated into ATX-sized motherboards.

You will notice on the Zeus motherboard that the bottom of the board holds a bank of two 8 pin and two six pin power connectors. The two eight pin connectors are labeled VGA 1 and VGA 2 while the two six pin connectors are labeled VGA 3 and VGA 4 respectively. At first this seems like a regular X79 chipset (socket 2011) based motherboard with giant heatsinks for overclockers. After doing a double take (at least I did), you will notice that the board has no PCI-E connectors!

Instead, the board has a large heatsink, and under that heatsink are two GPUs in CrossFire configuration. Tech Power Up believes that the GPUs being used are two AMD 7800 “Pitcairn” series mobile graphics cards in CrossFire configuration. While the desktop variants are fairly low power, they would need active cooling or a larger heatsink, which I think is what lead them to consider that ASUS may be using mobile-class cards. Reportedly, ASUS did not create this board to suggest GPU integration, but to show off dual Thunderbolt ports on an X79 motherboard.

As far as the dual GPU integration goes, however… I don’t expect we’ll be seeing a move in the industry like this any time soon, at least not on high-end Enthusiast boards (though I could see an argument for small form factor (SFF) budget gaming systems from OEMs). Dedicated graphics card technology moves at such a rapid pace compared to motherboards that it is just not feasible to market a feature like this to enthusiasts. While they may keep the same motherboard for years, those same users will likely upgrade their graphics cards at least once to stay current. Further, with the cost of these high-end motherboards already approaching exorbitant, adding integrated GPUs that don’t mesh well with the purpose of a high end system pushes the cost higher and demand to a point that these boards just don’t seem realistic.

While Zeus was more of a powerhouse with a twist (albeit one that isn’t really feasible to market), the other motherboard – Wolverine – is a “because we can” board but one that could have an impact on the industry today. ASUS has taken its Digi+ digital power to the extreme by packing as many power phases as it could into an ATX form factor motherboard. In total, they managed to place 40 power phases onto the PCB – notice how the CPU socket had to be shifted to the right to make room! 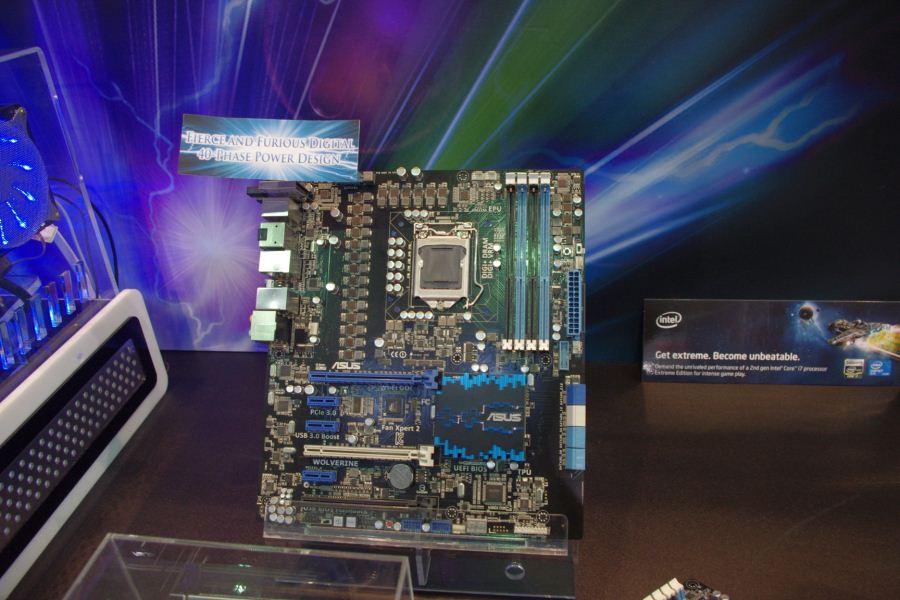 Granted, I’m not suggesting that we will be seeing motherboards coming out with 40+ power phases anytime soon. I can see this influencing future designs, however. Even heavy overclockers (water and air cooling levels) don’t really /need/ 40 power phases but we could start seeing vendors put out boards with half of that and still have it be a big improvement.

What do you think of the two new ASUS concept motherboards? You can see more images of the boards over at AnandTech’s gallery. Do you think they are on the right track? If not what areas do you think motherboard manufacturers need to improve?