Located at Booth L0810 in Nangang Hall 4F, MSI is showing off a tong of new hardware. One of the interesting displays is a wall of new motherboards based on AMD’s desktop Trinity APUs. Using the company’s Hybrid Digital Power design, the FM2 socket-based motherboards come in three sizes: EATX, ATX, and mini-ITX to meet various project needs. 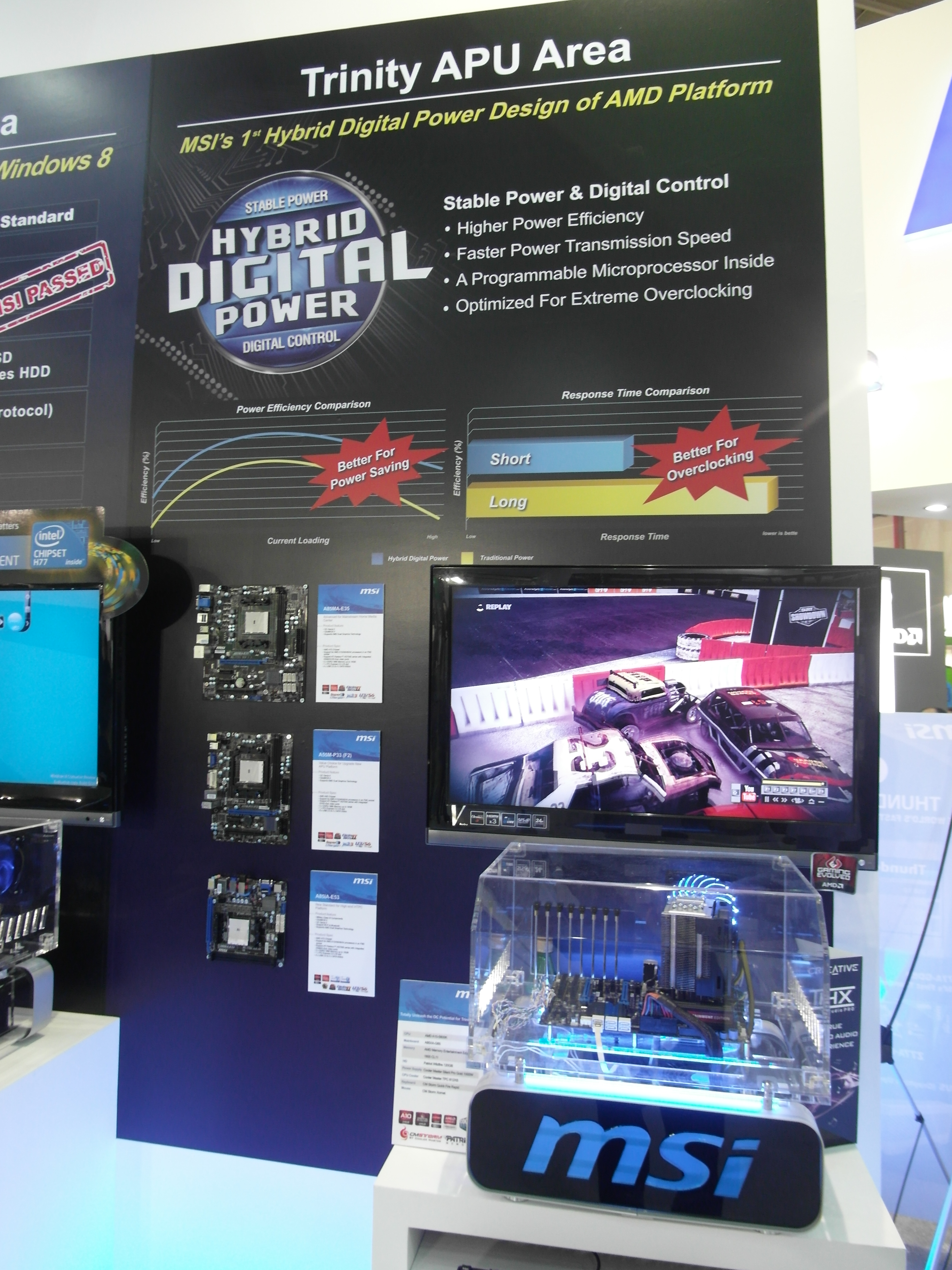 The smallest of the bunch is the MSI A85IA-E53 motherboard, which is designed for HTPC use. Based on AMD’s A75 chipset, the mini-ITX board features an AMD FM2 socket in the middle, with two DDR3 DIMM slots (a maximum of 16GB of memory) below, a single PCI-E 2.0 x16 slot to the left, and four SATA 6Gbps ports to the right of the FM2 socket.

MSI has two mid-sized ATX form factor motherboards with the the MSI A55M-P33 (F2) and MSI A85MA-35. The former is intended for traditional desktop use cases while the latter is rather shallow in depth and is meant to be used in living room HTPCs.

The MSI A55M-P33 (F2) is the company’s budget desktop motherboard. It supports OC Genie II and ClickBIOS II technologies as well as AMD Dual Graphics which allows the pairing of a Trinity APU integrated graphics card and discrete AMD GPU. In adition to the FM2 socket, the board features two DDR3 DIMM slots (maximum of 16GB of 1866MHz memory), four SATA 3Gbps ports, one PCI-E 2.0 x16 slot, one PCI-E 2.0 x1 slot, and one legacy PCI slot. 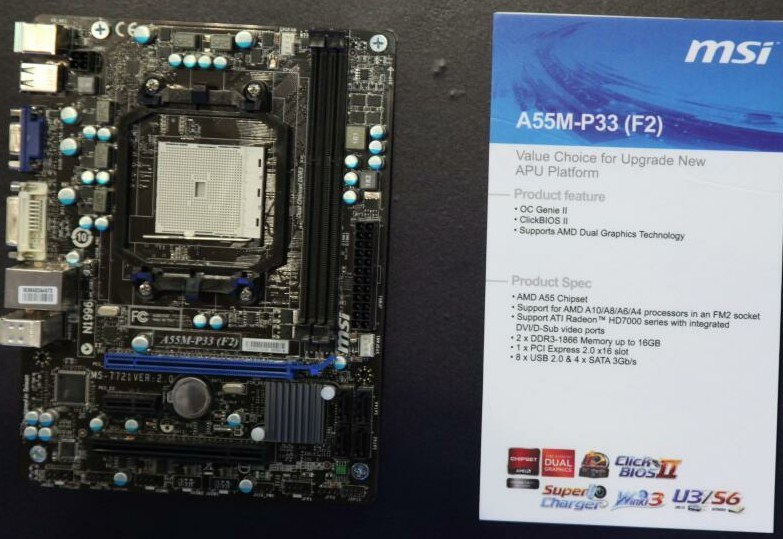 This motherboard is actually based on the AMD A55 chipset which explains the lack of 6Gbps ports and USB 3.0 support. The company describes the board as the “value choice” for those upgrading to a new Trinity-based system. Rear IO on the A55M-P33 (F2) includes eight USB 2.0 ports, six 3.5mm jacks for analog audio output, Gigabit Ethernet, and DVI and VGA display outputs.

The second ATX motherboard is the MSI A85MA-E35. This motherboard has been designed wider and shallower than traditional desktop ATX boards so that it can fit into slim HTPC cases (that usually have more room longways than height-wise as they need to be able to fit into AV racks and other short spaces). It is essentially the mATX A85IA-E53’s big brother as it takes the AMD A75 chipset and takes advantage of the larger PCB area to add additional functionality. The motherboard features MSI’s OC Genie II and ClickBIOS II technology and AMD’s Dual Graphics support for pairing a dedicated GPU with the Trinity APU’s graphics portion. 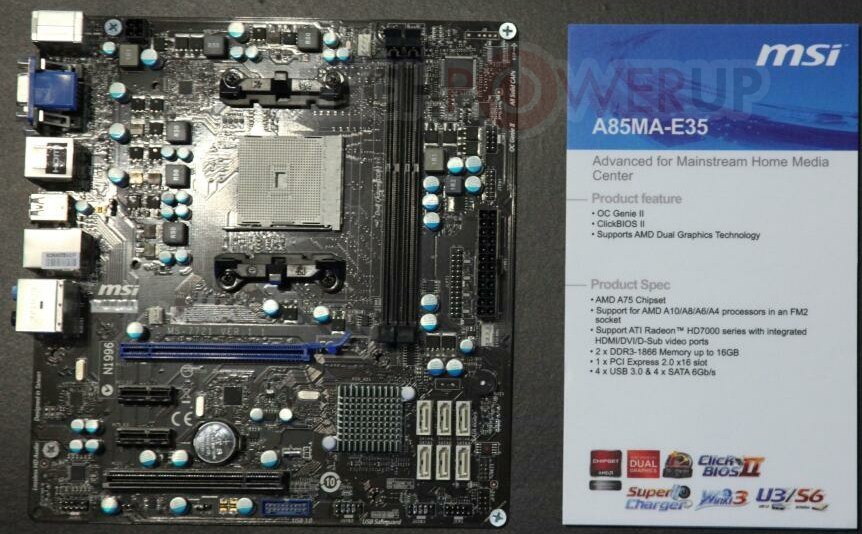 The board is rather spaced out as the PCB is stretched out to keep things as shallow as possible. It does feature two DDR3 DIMM slots (maximum of 16GB 1866MHz RAM), the AMD FM2 processor socket, one PCI-E 2.0 x16 slot, two PCI-E 2.0 x1 slots, and one legacy PCI slot. The only motheboard component with a heatsink attached is the southbridge, which is powering six SATA ports, at least four of which are 6Gbps (MSI only lists four 6Gbps ports in the documentation, seen above and to the right of the board [TechPowerUp indicates that all six are 6Gbps, however]). Rear IO includes four USB 3.0 ports, six analog audio out jacks, Gigabit LAN, and what is likely a PS/2 port and optical audio output.

In other words, MSI has bolted just about everything it could to this board. They confidently labeled the motherboard as the board for enthusiasts to use to push Trinity overclocks as far as possible. The first thing I noticed about the image (seen below) of the A85XA-G65 was the massive heatsinks on the VRMs and southbridge – did I mention they were huge? In addition to the well-cooled VRMs, the motherboard features four DDR3 DIMM slots (max of 32GB 1866MHz RAM), two PCI-E 2.0 x16 slots, three PCI-E 2.0 x1 slots, and two legacy PCI slots towards the bottom of the board. To the right is the southbridge (with relatively large heatsink) powering eight SATA 6Gbps ports. 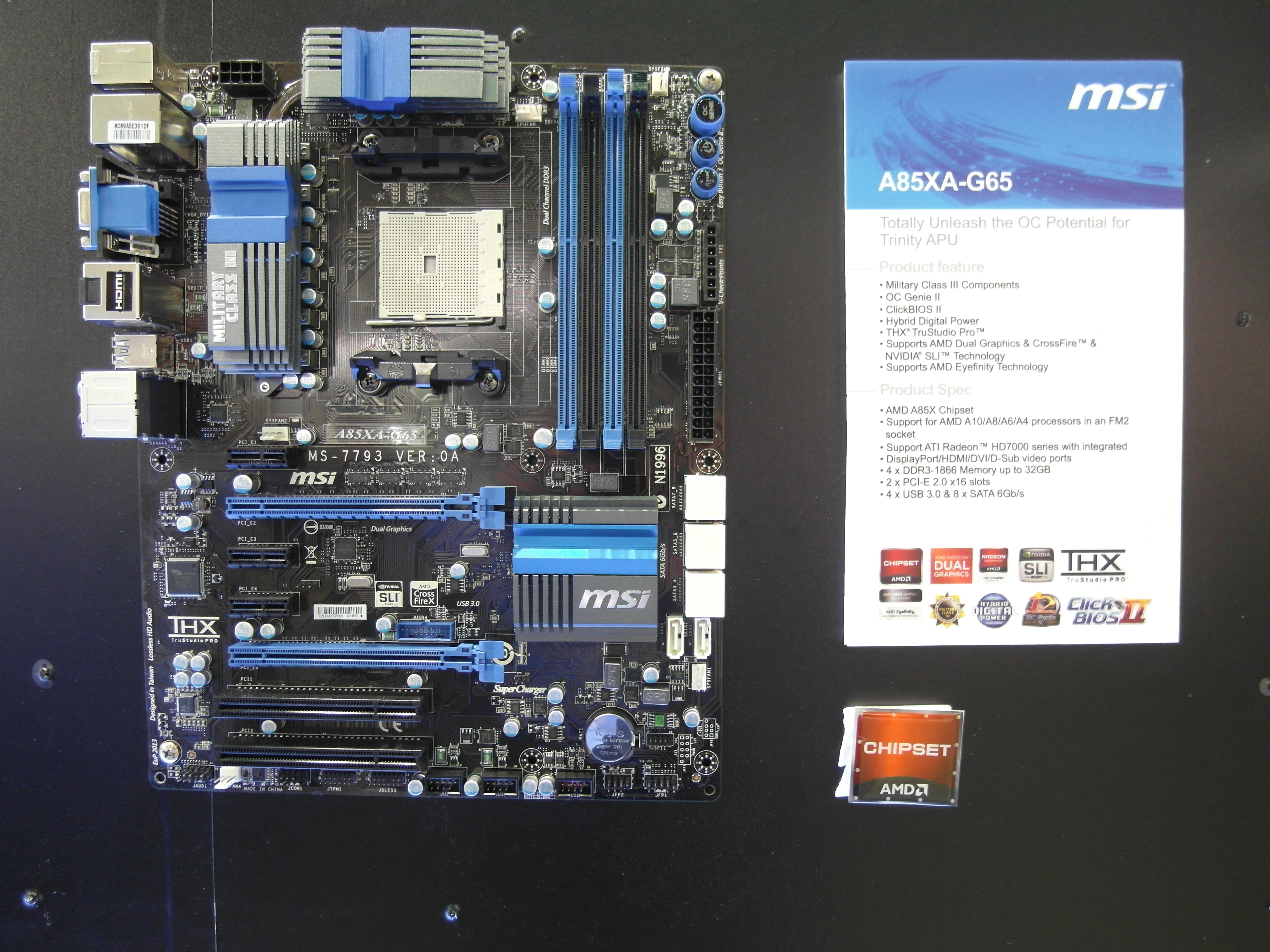 The A85XA-G65 supports DisplayPort, DVI, HDMI, and VGA video outputs. Beyond that, rear IO includes a combo PS/2 port, four USB 2.0 ports, two USB 3.0 ports, Gigabit LAN, six 3.5mm jacks for multi-channel analog audio outputs, and an optical audio output. If you want to push desktop Trinity to the max, this board definitely seems like a good place to start.

MSI has definitely come out in full force with a slew of AMD Trinity motherboards. The HTPC ones, and the mini-ITX one in particular, interest me. The beastly A85XA-G65 is also pretty neat for overclocking potential. Stay tuned to PC Perspective for more Computex 2012 coverage! What do you guys want to see from the show? You can see a few more photos after the break. 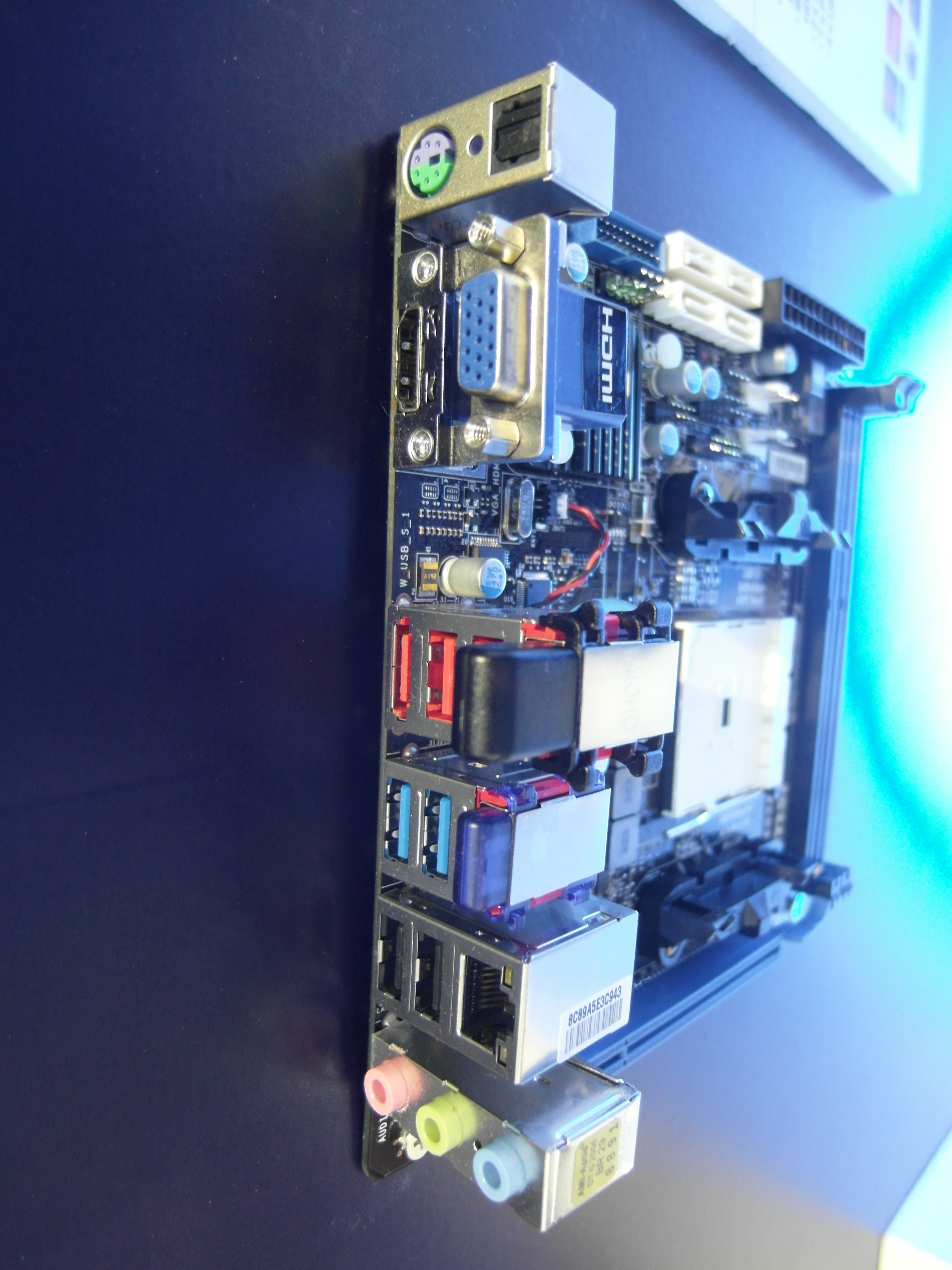 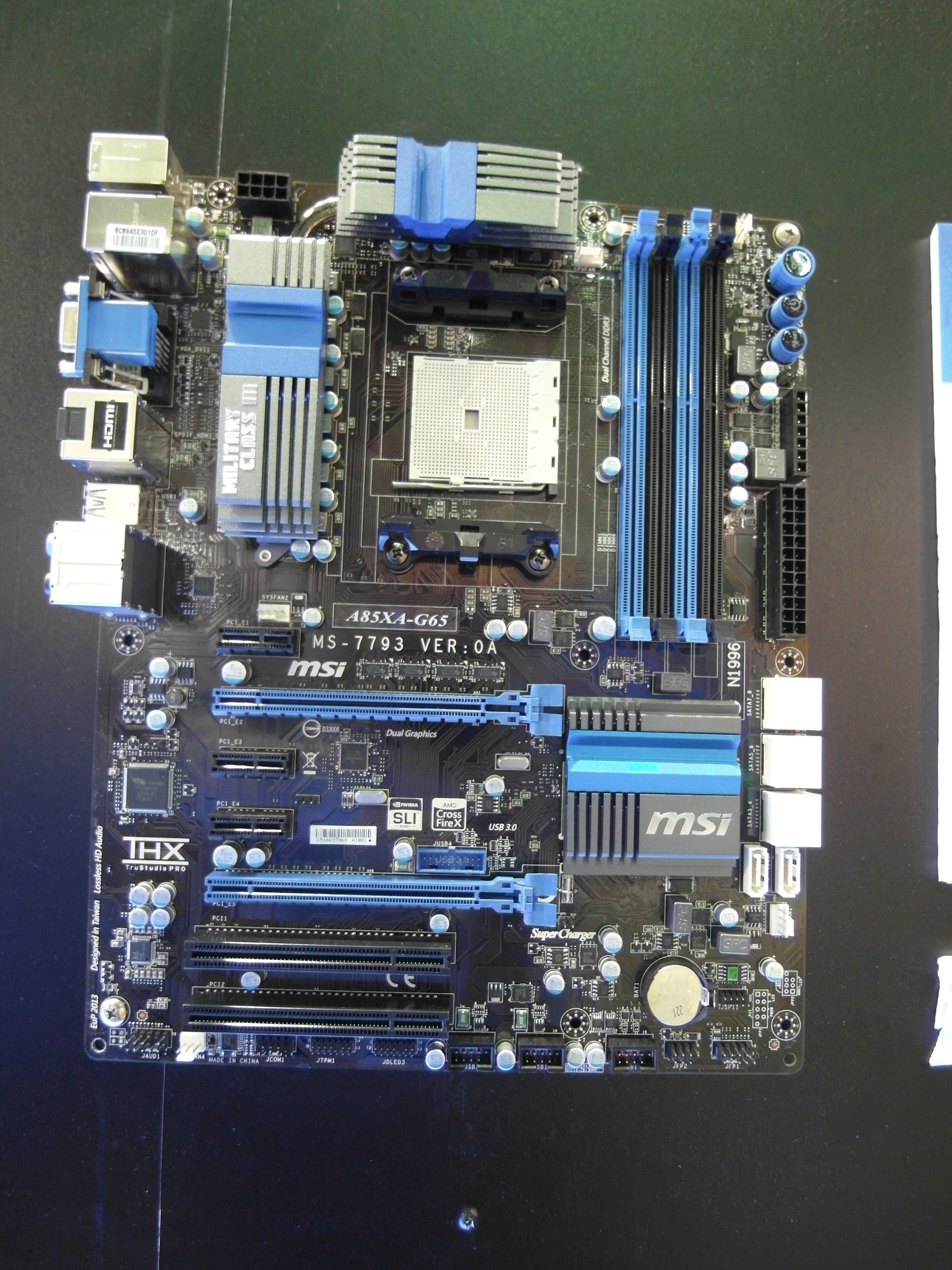 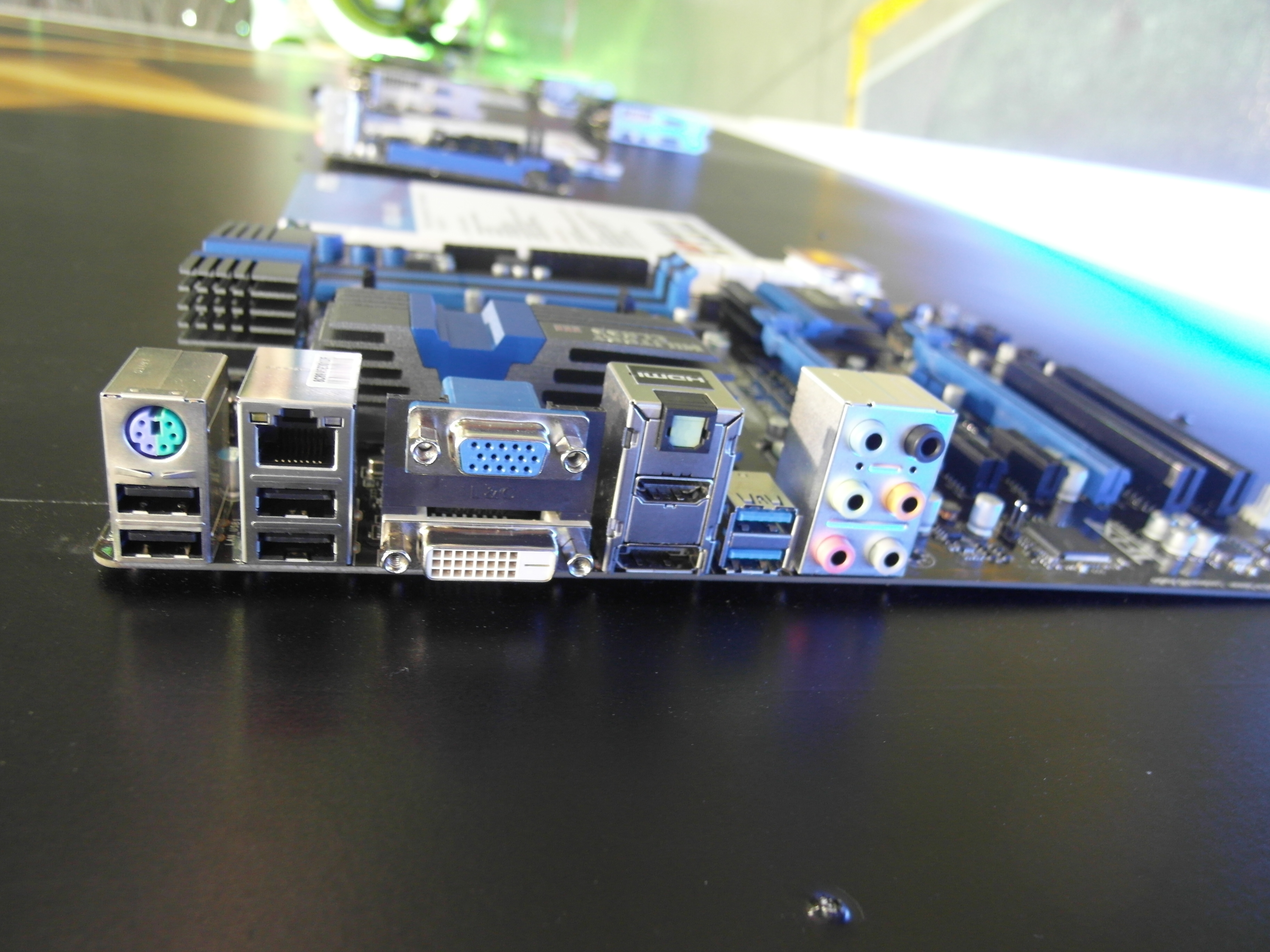 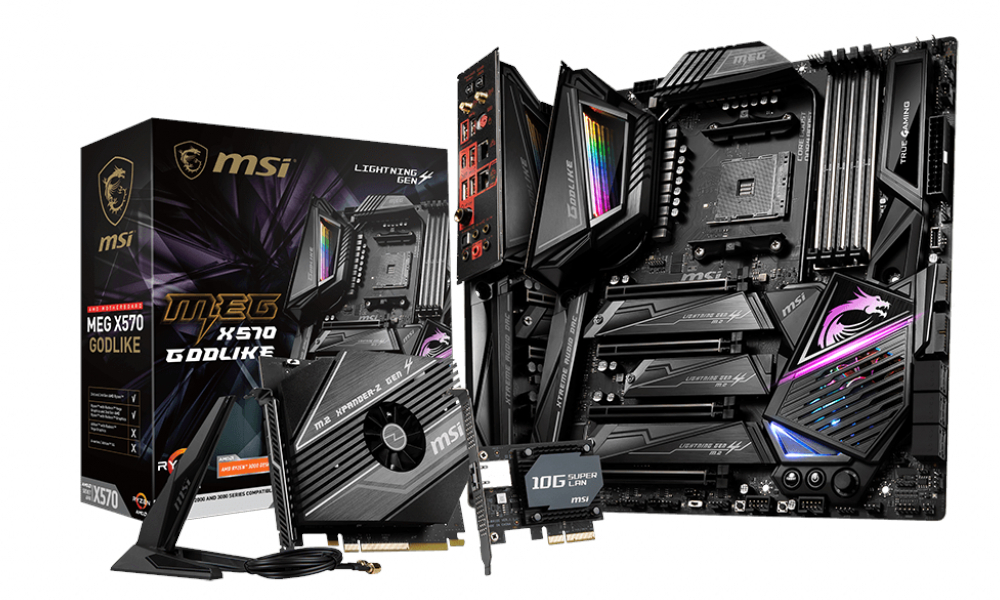