Galaxy was the first to send us a new GT 640 card based on the NVIDIA GK107 GPU. Can it help battle in the low end of the market?

With the release of the Kepler architecture in March of this year, NVIDIA has once again seemed to take back the hearts of PC gamers with a GPU that is both powerful and power efficient. The GK104 has seen a product implementation as the GTX 680, the dual-GPU GTX 690 and most recently as the GTX 670. With a price tag of $399 though, there is still a very large portion of the graphics card market that Kepler hasn’t touched but is being addressed firmly by AMD’s Radeon 7000 series.
Today we are going to be taking a look at NVIDIA’s latest offering, the sub-$100 card known as the GeForce GT 640 based on a completely new chip, the GK107. Specifically, we have the Galaxy GeForce GT 640 GC factory overclocked card.
NVIDIA’s GK107
Compared to the GK104 part, GK107 is a much smaller chip and the GT 640 implementation of it contains two SMX units and 384 CUDA cores. That is a significant drop off compared to the GTX 680 (1536 cores) and the GTX 670 (1344 cores) but it should really come as no surprise to those of you that follow the NVIDIA GPU families of the past.  The chip will have 32 texture units and 16 ROPs.
Continue reading our review of the Galaxy NVIDIA GeForce GT 640 1GB GC based on the GK107!! 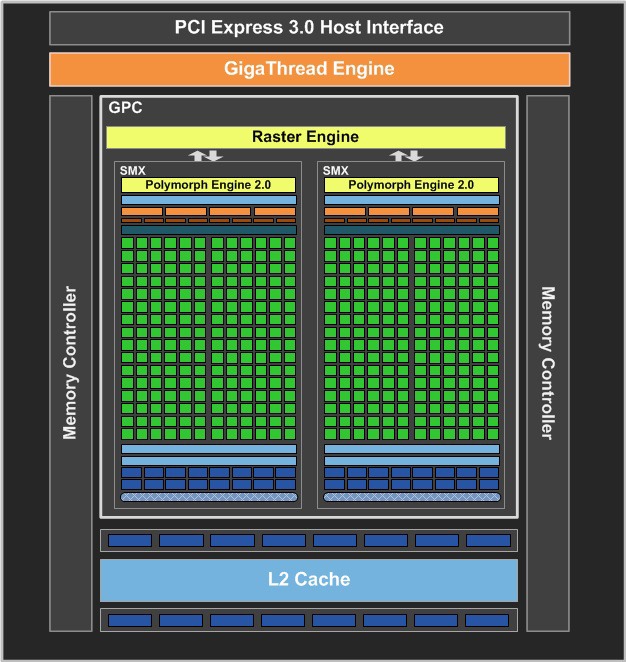 GK107 uses a 128-bit memory bus and in this case we are seeing cards shipping based on GDDR3 memory. Reference clock speeds for the GT 640 are 900 MHz on the core and 900 MHz for the memory.  While you will surely see some overspeced memory allocations from other AICs down the road, our tested model includes 1GB of frame buffer and will likely be the standard.  (Note: the NVIDIA reference guide actually shows a 2GB frame buffer.)
We are told by NVIDIA that this is the FULL GK107 chip with 384 CUDA cores and the chip has a total TDP of 65 watts.  Transistor count is 1.3 billion.
To be fair, selling for under $100, we shouldn’t expect too much out of the GT 640 in terms of performance and we still have likely products like the 660 and 650 to bridge the WIDE gap between $100 and $400 but let’s take a quick look at Galaxy’s implementation of this new GPU. Still, the specification drops here for this SKU are significant and right away we were worried how NVIDIA’s new card would stand up to the competition from similarly priced discrete GPUs from AMD.