The idea of switchable graphics was just barely "a thing" two years ago. Now it is found in nearly all consumer laptops with discrete graphics. It’s one of those rare features that actually was a “game changer.” Battery life among discrete graphics laptops has risen from abysmal to excellent in just a couple of years thanks in part to this technology.

The basics of each solution are the same when a discrete GPU is paired with Intel HD graphics. Unless its services are required the discrete GPU remains off, or at least effectively so – my experience testing the endurance of switchable graphics enabled laptops has indicated that the latest implementations from AMD and NVIDIA impose no detectable penalty on (battery) endurance when a laptop is not actively using them.

Where the two solutions diverge is driver support. I’ve encountered far more laptops with Optimus than with AMD Switchable Graphics, and my experience has lead me to think that it is for the best. Optimus, as it is implemented today, is wonderfully seamless. You can muck around with graphics settings if you want, but it’s not required. Everything just works without user input. You start a game and the GPU turns on. You leave the game and it turns off. Instantly, with no flicker and no prompts.

AMD’s drivers are more confusing because they often prompt the user for input. This is simply a re-hash of AMD’s general user interface issue (as mentioned previously). All of it seems as if it should be easy. The prompts are self-explanatory and there’s even a red/yellow/green color-code scheme that indicates what software does and doesn’t use the discrete GPU. But the constant nagging grows old and navigating the driver software requires more effort than it should.

The new Fusion products are an exception to this because they do not switch between a discrete GPU and an IGP. AMD Fusion laptops are using the IGP all of the time – unless they have a separate AMD discrete GPU which is connected via CrossFire. With no IGP to switch to, there’s no transition to make, and the result is just as seamless as what Nvidia offers with Optimus.

This is a non-trivial point. AMD’s new APUs make a decent case for themselves for the very budget conscious and brush aside some of AMD’s low-end discrete GPUs as a result. Buyers looking at an inexpensive multimedia laptop will actually receive a better user experience than those looking at a more expensive laptop with one of AMD’s discrete GPUs. 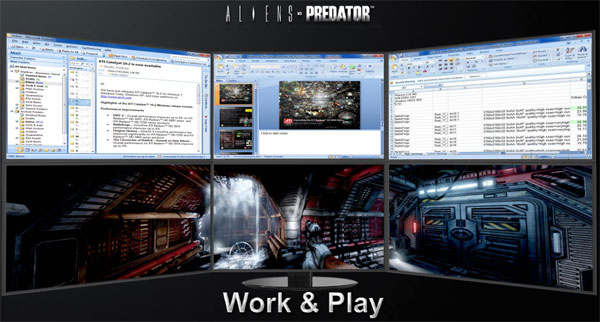 AMD, Intel and Nvidia all support multiple monitors with their latest generation of graphics hardware.

Eyefinity can technically support up to six displays on the desktop but has always been limited on laptops. Currently, with Trinity, the maximum number of displays has been upped to 4. This is the current king of the hill, but you will likely have problems finding a laptop that has the proper outputs. (The upcoming MSI GX60 laptop will support up to three displays but that is not common).

NVIDIA gave me an interesting response when I asked them about display count. They stated that because the IGP is the default for almost everything besides games in a system using Optimus switchable graphics, laptops with NVIDIA Optimus chips will default to supporting whatever monitors the IGP can handle.

TV on the go