This particular card is a step above the reference HD 7950, but not nearly as over-the-top as the Lightning branded cards from MSI. The card uses the reference PCB design, but utilizes slightly higher quality components throughout. The outputs for this card also reflect the reference design, which is a bit of a disappointment but not exactly a deal-breaker. If we remember back all the way to the HD 5870 release, each card has two dual-link DVI outputs along with an HDMI output and one to two mini-DisplayPorts. With the 6000 series they still support two DVI outputs, but only one of them was dual link. Now we are looking at a single dual link DVI connection along with HDMI and two DisplayPorts. The good news here is that once the DisplayPort Multi-Stream Transport Hub is available (supposedly this summer) then a single card can power six monitors through just the two DP ports. 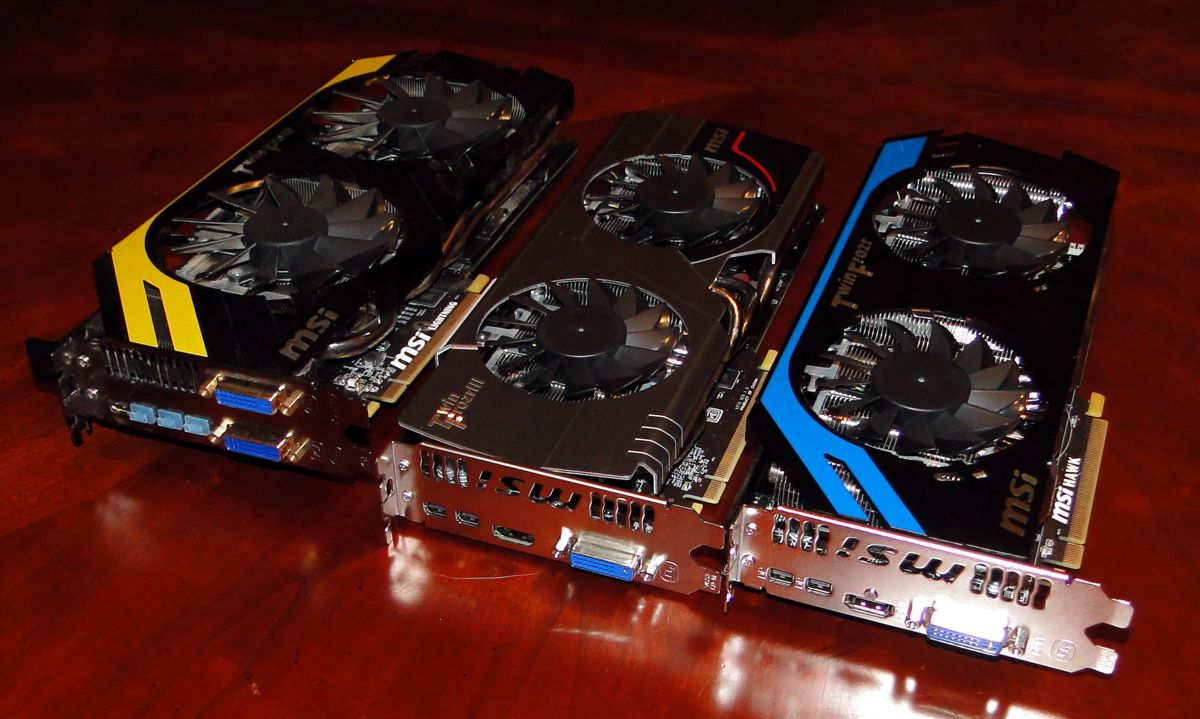 The card does feature the selectable BIOS functionality, but MSI did not include any secret sauce that would unlock the chip for massive overclocking with LN2. If a user wants to go that direction, then they should purchase either a Lightning or Hawk based card from MSI. This also means that it shares the same reference power design. This is not necessarily a bad thing, but it can have an effect on overclocking potential as compared to higher end designs which split off the power from the GPU, memory, and PCI-E connection.

The big change that we are of course looking at is the inclusion of the Twin Frozr III cooling solution. Twin Frozr III was introduced last year and it features a slightly optimized cooling fin design with five heatpipes (two of which are the “Supah-pipe” 8 mm versions). Two 70 mm Propeller blades keep the aluminum fin array cool, and supposedly improve airflow by 20% over standard fans while keeping noise down. The design does include the “form in one” heatsink which covers all of the major heat producing components throughout the board, and it also acts as a board stiffener so that it does not bend and warp when installed in a tower style case.

MSI has overclocked this particular model by a fair bit. The core goes from a stock 800 MHz up to 880 MHz, but memory is kept at a stock 1250 MHz. Between the cooling and the Military Class III components, this particular card should see quite a few extra MHz of overclocking potential. This particular design does allow overvolting the GPU when used in conjunction with MSI’s Afterburner software. 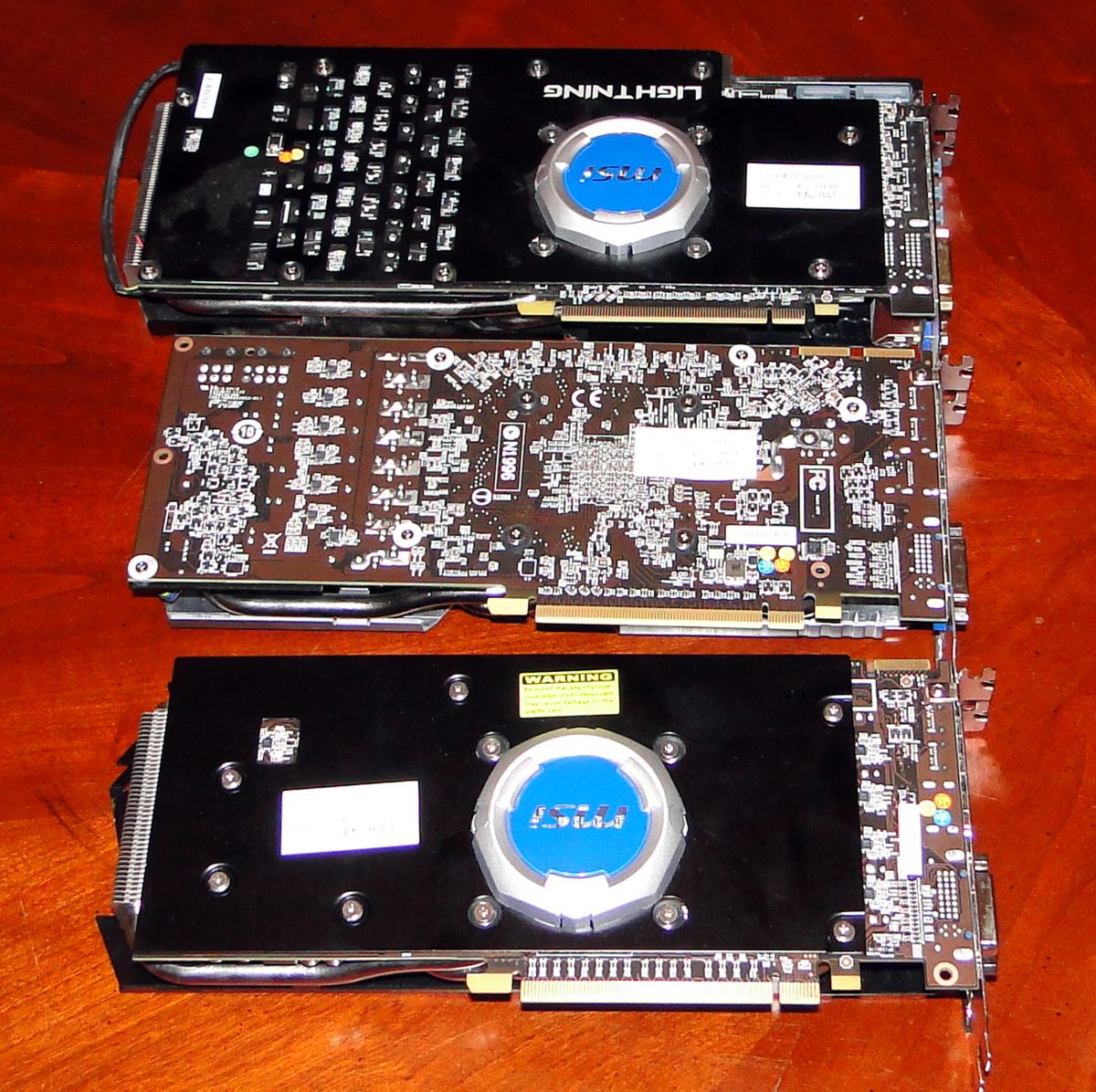 The Lightning and the Hawk both feature the GPU Reactor module which smooths out the current and increases amps.  Honestly, it is only very useful for LN2 cooling.  It looks cool though!

Using a reference PCB design does save on development and production costs, so these boards are typically quite close in price to fully reference based cards. Combined with the mature Twin Frozr III heatsink/fan design (Twin Frozr IV was introduced this year with the Lightning and Hawk series), these cards do represent an affordable and meaningful upgrade from a standard HD 7950.

I have made a few changes to the usual graphics testbed. I overclocked the Phenom II X6 1100T so that it runs at 3.7 GHz all the time. Usually the chip runs at 3.3 GHz and turbos up to 3.7 GHz when only three cores or less are loaded. This particular overclock should give a little better performance in games which do leverage more than 3 cores of a processor. The beauty of this particular overclock is that it does still put the CPU into a low power state when not in use and downclocks it to 800 MHz at idle. This still allows me to get good idle power numbers from these cards without a fire breathing CPU hogging the watts even when doing nothing.

The next change was with the power supply. I went from the Antec HCP 1200 to the Corsair AX1200. These two are very similar in performance, but the AX1200 just barely edges out the HCP in overall efficiency. The modular design makes a bit more sense on the Corsair side, and the cooling is superior in terms of quality and noise.

Going from the side view we see the aluminum fins are all fairly tall.  There is a good amount of cooling surface for this particular card.

The final change was going from the older (and slightly cramped with larger cards) Silverstone Raven RV02 case to the new Enermax Fulmo GT. This monster case is far roomier and features cooling that is just as good as the Raven. I must admit though, the Raven was a bit superior when it came to swapping out video cards. Even though it was a bit cramped with the bigger cards, it was easier to work on. Oh well, such is progress.

For comparison I am using the MSI N580GTX Lightning Xtreme Edition, the XFX R7870 DD Black Edition, and the MSI R7970 Lightning. I am hoping that I will soon have a GTX 670 or 680 to add to the mix, but so far those boards have been hard to find.

Your 1900XT is already obsolete