Has Chrome OS improved since its introduction?

In August of 2011 I reviewed the Acer AC700-1099, one of two Chromebooks available in the North American market. The review was almost entirely negative. The hardware wasn’t great and the operating system was a bit of a mess–capable of only the most basic tasks.

Since then, the small surge of hype that surrounded the Chrome OS release has receded. You could be mistaken for thinking Google has abandoned it, but they haven’t. In typical Google fashion it has been slowly, quietly improved. Performance tweaks have allegedly improved web browsing, a proper file manager has been added and Google has just launched Google Drive, its cloud storage service.

Such enhancements could address a lot of the concerns I had with the Acer rendition. Do they? That’s what we’re here to find out. Let’s start with the basics – what’s inside? 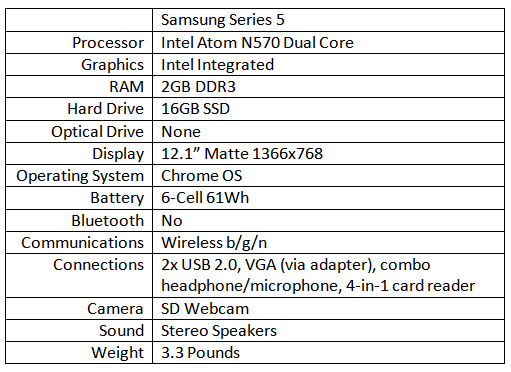 The hardware inside the Samsung Series 5 is nearly identical to what was inside the Acer AC700-1099 that we reviewed late last year. We’re talking an Atom processor that must rely on its own IGP, two gigabytes of RAM and a tiny–but quick–16GB solid state drive.

Let’s see if improved software and a lower price can turn Chromebooks into winners. 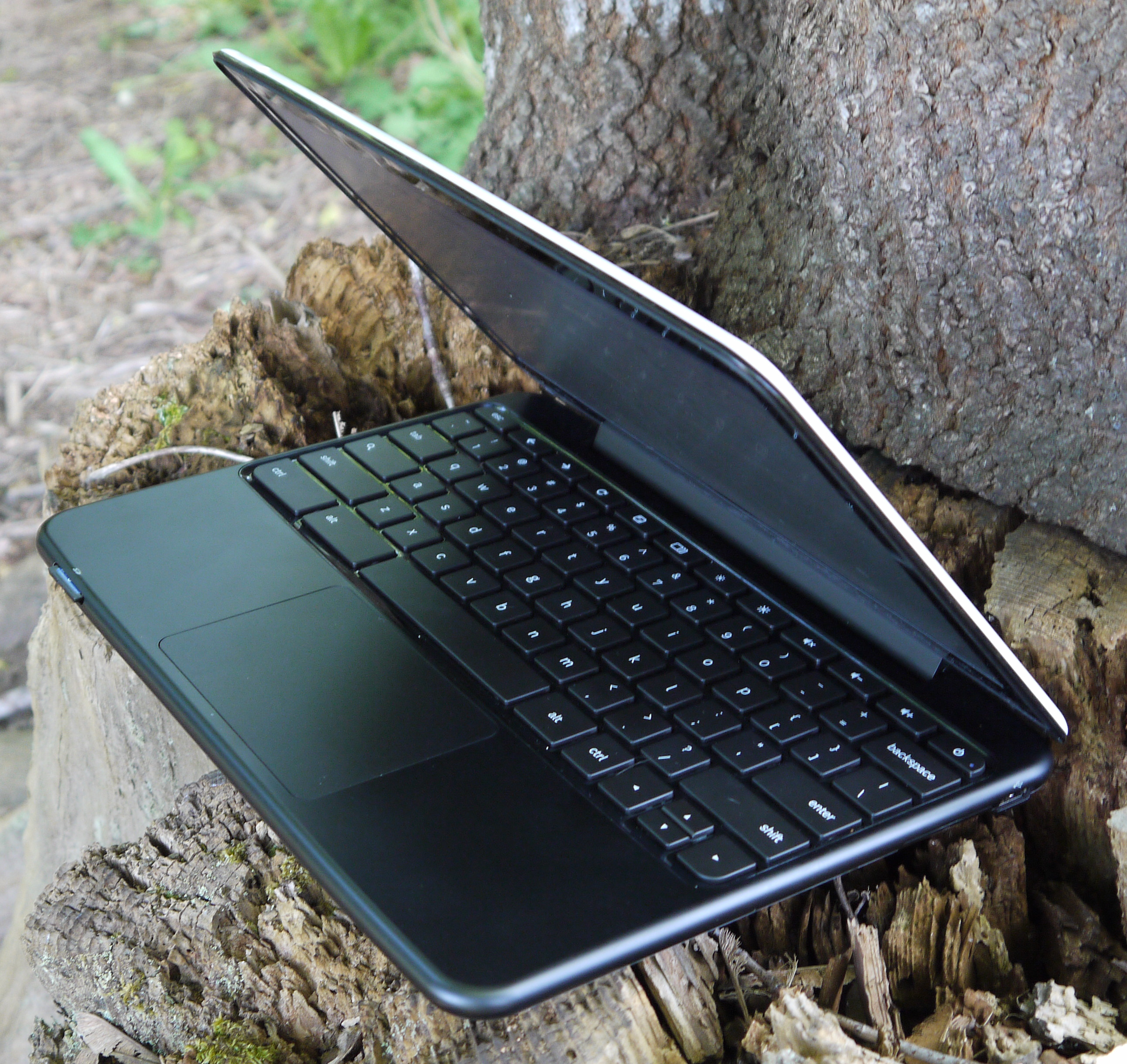 The Samsung Series 5 is a looker–at least in “Arctic White,” the color we received for our review unit. It is a bright, pure shade and stands out well now that Apple has abandoned white in favor of silver aluminum.

Only the lid is white, unfortunately, and it’s adorned with both a Samsung logo (which, of course, is just the company’s name in chrome) and a separate Google Chrome logo. It’s a nice conversation piece, as many people have heard of Chrome but are not aware of Chromebooks.

Black is the interior color of choice regardless of the lid color you receive. The plastics used are semi-gloss with the exception of the display bezel, which is gloss to fake the appearance of edge-to-edge glass.

Material quality is average. Everything feels solid and the design of the laptop disguises some gaps between surfaces, such as the lower and upper halves of the chassis. Still, there’s no getting around the fact that the plastics are inexpensive, and they occasionally creak or groan when pressed or handled abruptly.

Connectivity is quite limited and easy to miss, as most of the ports are well hidden by the laptop’s round edges. There are two USB 2.0 ports, VGA (via an adapter shipped with the laptop) and a combo headphone/microphone jack. This is a little worse than a netbook, but not by much. 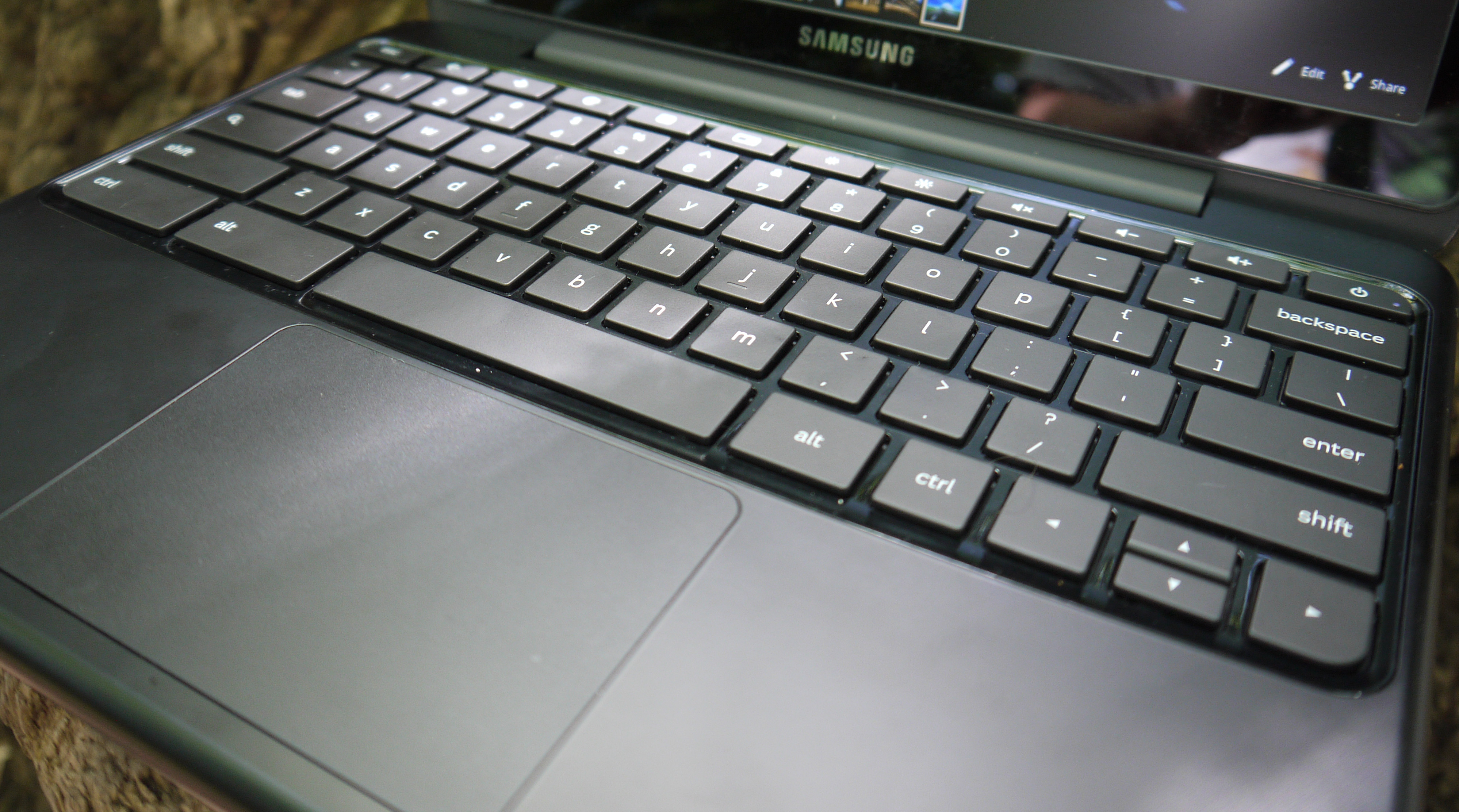 Abandoning Windows does interesting things for the Series 5’s keyboard. Suddenly there is no need for the F1-12 keys to exist, nor is there a need for a Windows key or a laptop Fn (function) key. With these removed, functions critical to the laptop (such as display brightness and volume) can be placed where the F1-12 keys used to be.

This frees up a great deal of space. While the Series 5 offers a small display, its keyboard would not feel out of place on a typical ultraportable or a small mainstream 14-15.6” laptop. The length of the keyboard is almost identical (discounting the numpad) to that of the Acer Aspire Timeline Ultra M3, for example–a laptop with a 15.6” display. And there’s nearly as much palm space.

Even the feel of the keyboard is decent. There’s reasonable key travel, and due to the large size of the keys–as well as the large gaps between them–touch typing is simple. Flex is kept well in check.

Touchpad quality is another high point. It lacks texture but makes up for that by being huge–again, there are 15.6” laptops that fall behind the Series 5. Multi-touch scrolling is excellent, vastly better than it was late last year, and on par with a MacBook. Unfortunately, the praise stops there – pinch to zoom and other, more advanced, multi-touch gestures aren’t supported.