As we mentioned earlier in the review, in SilverStone’s own words "The Crown Series CW02… the interior design of the CW02 is able to accommodate extended length graphic cards, proficiently displaying the HTPC system at its best. Capable of installing CPU coolers of 160mm in height for additional cooling options, this spacious accommodation assures the highest performance system possible." Our curiosity was also perked by several recent inquiries from readers asking for a HTPC enclosure that could accommodate a full gaming system or multi-media server without having to compromise on components (mobo, video cards, PSU, storage, etc). As one reader wrote; "I’m looking for a large, high quality HTPC case that will let me install my dual purpose gaming system and media server. It needs to have plenty of room for a full size ATX mobo, dual graphic cards, a large PSU, good case cooling and at least 5 internal 3.5" drive bays (four HDDs and one SSD)." OK, we accept the challenge! In this section we are going to install the hardware for a high-end system with plenty of gaming horse power and 12 terabytes of music, photo, and movie storage space. 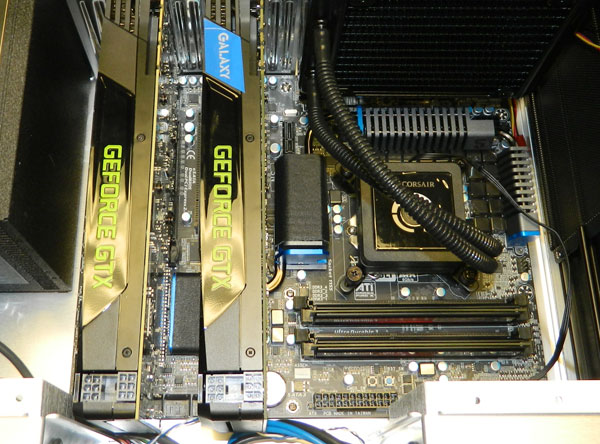 The SilverStone CW02 HTPC chassis is designed to accommodate both ATX and Micro-ATX motherboards and we had no problems slipping our full size Gigabyte GA-Z68XP-UD5 into place as the foundation for this system. All the mounting holes lined up perfectly on the standoffs. 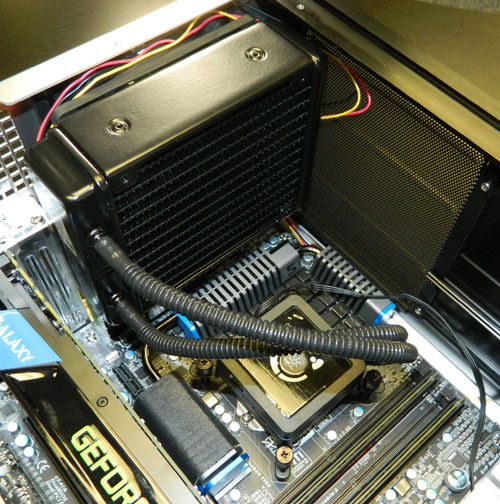 To mount the Corsair H80 liquid cooling system, we first had to remove the 120mm SilverStone case fan from the back panel and then install the Corsair cooling fan/radiator in its place. As you can see in the photo above this cooling solution fit perfectly into the space provided and the big side panel vent allows fresh outside room air into the CW02 enclosure for cooling the radiator. 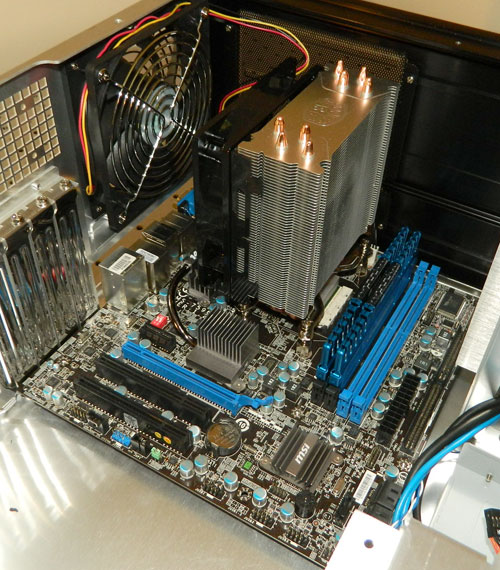 In this scenario we installed a large tower style cooler and once again all went as planned. Note: the Cooler Master Hyper 212 Evo cooler is installed on a Micro-ATX mobo, which also fit into the CW02 chassis as expected. 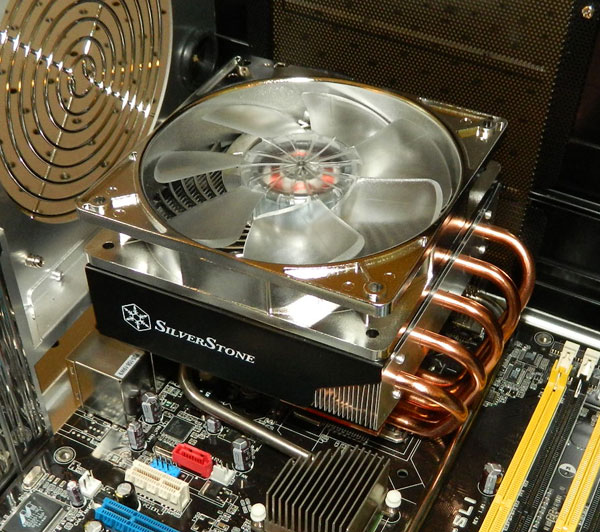 And last but not least, we installed one of SilverStone’s very capable low profile Nitrogon NT06-E CPU coolers, which features a robust mounting system, five copper heatpipes, and a mounts a 120mm cooling fan.

It’s not very often that you will find a HTPC enclosure that is capable of mounting a pair of high-end graphics adapters. So, for this test I ventured across the river and hit Ryan up for a pair of GTX 680 graphics adapters! These cards are 10" long and require a pair of 6-pin PCI-E power connectors. In the specifications section for the CW02 chassis, it states that the CW02 enclosure will support expansion cards up to 12.1" long (or 15.5" long with the card reader removed). 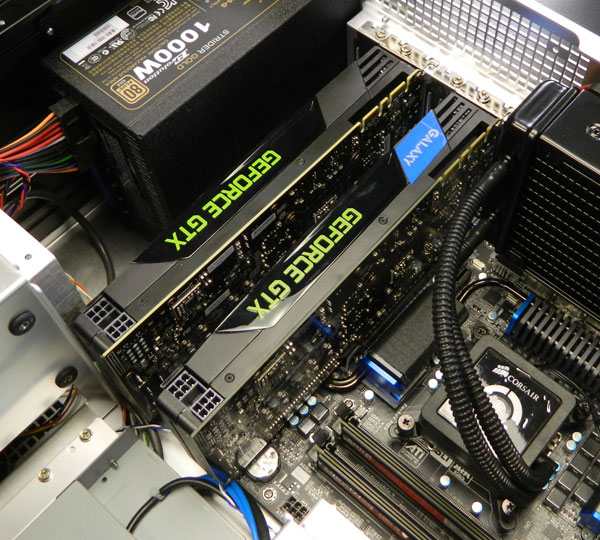 At first it seemed like all was well, but when it came time to install the internal 5.25" optical drive we encountered a potential problem. There is only about 5/8" clearance between the top of the graphics adapter’s power receptacles and the bottom of the ODD. It looked like the two PCI-E power cables would be blocked. However, after a little experimenting I found that by pulling the shrink wrap and mesh sleeving away from the end of the PCI-E cables I was able to make a near 90 degree bend in the wires and everything fit together. 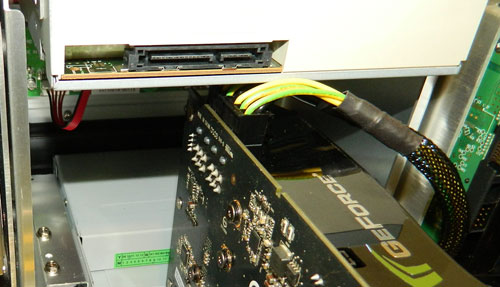 Note: For expansion cards that are over 9" long, the close clearance between the top of the graphics adapter and the bottom of the internal optical drive enclosure will require mounting the graphics adapter(s) first and then installing the ODD. And you will have to pay close attention to carefully bending the wires as they leave the connector so as to provide the necessary clearance. 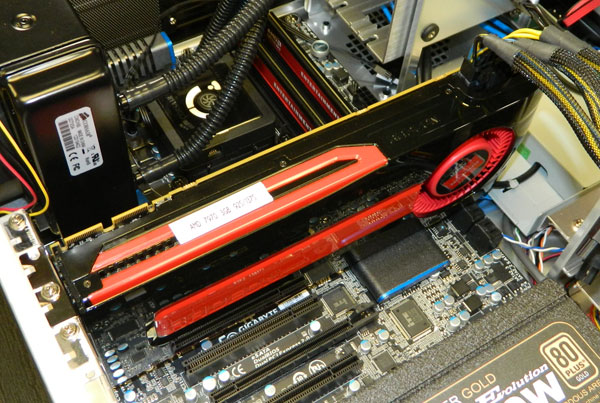 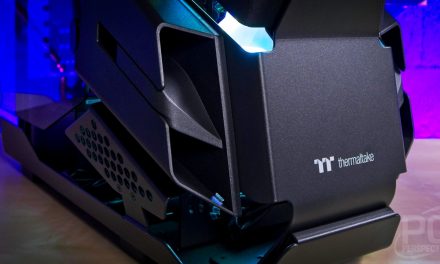 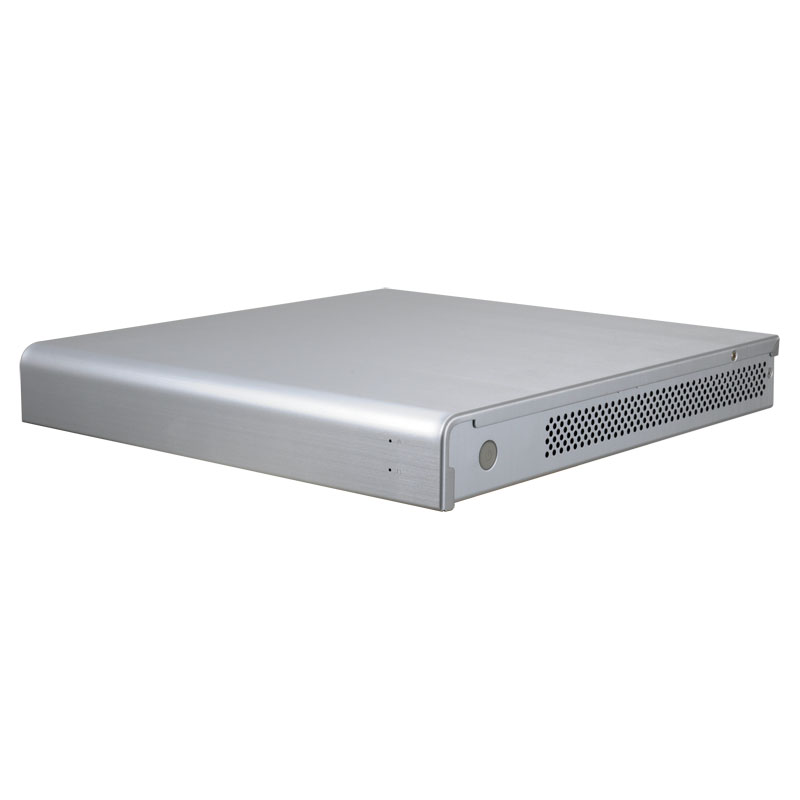 Blew all your money on a CPU and need a sub-$40 cooler?