Double Thunderbolt, what does it mean?  It means that properly set up, the two Thunderbolt ports can power up to 12 devices and 2 digital displays simultaneously, with a third display possible from a dedicated video out port on your motherboards header.  Both Thunderbolt ports offer a bi-directional 10Gbps data pipeline that includes both PCIe and DisplayPort traffic, which can be intelligently shared by the devices attached to the interface.  Gigabyte is offering three models of motherboard with this feature, in addition to their standard additional features such as UltraDurable components, which you can read about below.

GIGABYTE Thunderbolt™ motherboards allow users to daisy chain up to 12 devices simultaneously via an incredible bi-directional 10Gbps data pipeline that includes both PCIe and DisplayPort traffic. GIGABYTE Thunderbolt™ motherboards redefine desktop PC connectivity to make it far easier to connect multiple high speed storage devices and HD displays to your PC than ever before. 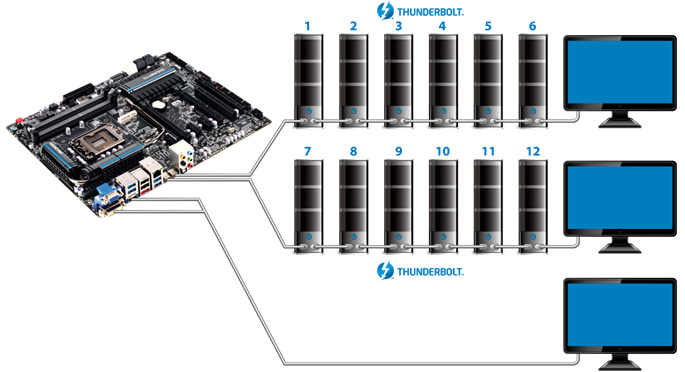 “Thunderbolt technology represents a leap in performance and simplicity for media creators and entertainment enthusiasts,” says Jason Ziller, Intel’s director of Thunderbolt marketing. “We are pleased to be working with GIGABYTE as they bring the first dual Thunderbolt port motherboard to market. It’s a great example of what Thunderbolt makes possible.”

“Working with GIGABYTE has been very exciting,” said Kosta Panagos, Director of Creative Marketing, at CalDigit. “GIGABYTE’s new line of Intel 7 series motherboards featuring dual Thunderbolt ports, will usher in a new era of flexibility to the PC platform. It is also a perfect match with CalDigit's new T1 and T2 Thunderbolt drives which provide professional level performance on all platforms at consumer prices, a feat that was previously unattainable, thanks to GIGABYTE and Thunderbolt technology.”

“GIGABYTE’s new dual port Thunderbolt motherboards are an exciting innovation, giving incredible performance and are perfect for video and film professionals using Thunderbolt and the PC,” said Grant Petty, CEO, Blackmagic Design. “Customers using our wide range of Thunderbolt devices will now be able to choose to work in whatever format they need, giving them the flexibility to build whatever production and post production workflow they need.”

“Thunderbolt technology is a fantastic way to deliver both data and display via one interface. It provides unparalleled performance and plenty of flexibility,” said Leo Paskin, Product Marketing Manager at Seagate. “With the ability to daisy chain up to 12 devices on GIGABYTE’s new dual port Thunderbolt motherboards, you can turn a desktop PC into a central device hub by plugging in a single cable!"

“LaCie is pleased to see GIGABYTE announce Thunderbolt technology on their lasted motherboards,” said Erwan Girard, Professional Business Unit Manager, LaCie. “The time is now for demanding PC users, especially digital content creators, to experience the unprecedented speeds and advantages enabled by Thunderbolt Technology. The desire for computers and peripherals to keep up with their work flow is a concern of the past.”

Thunderbolt™ combines both DisplayPort and PCI Express protocols over a single cable so that users can connect a multitude of device types in tandem with HD streaming video and 8-channel audio, simultaneously in one specially developed cable. Users can also enjoy improved flexibility by ‘daisy-chaining’ several devices while still enjoying low latency and industry-leading data transfer speeds. 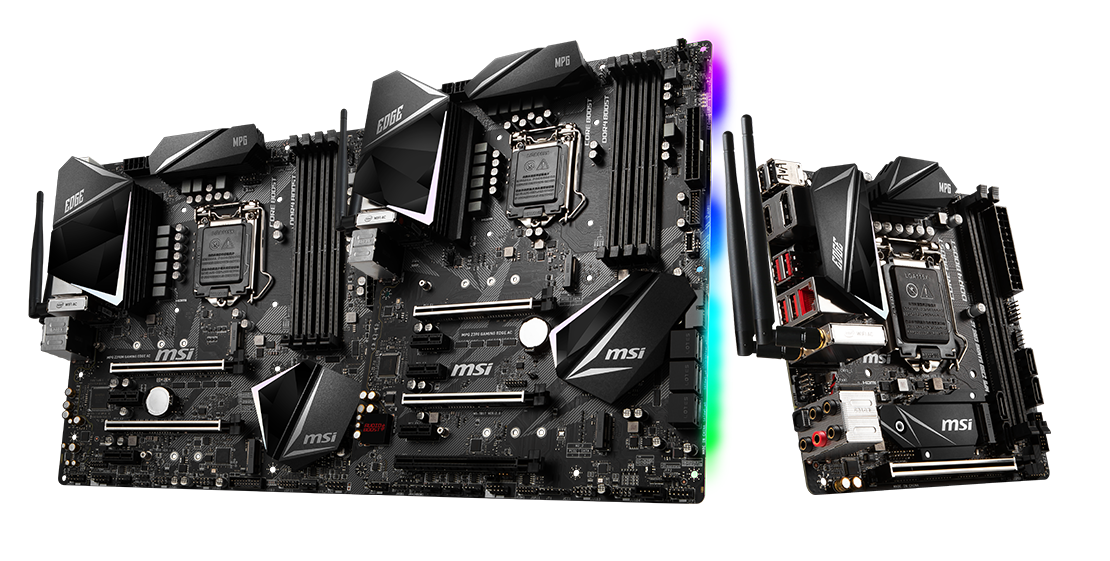