Android 4.1 In A Nutshell 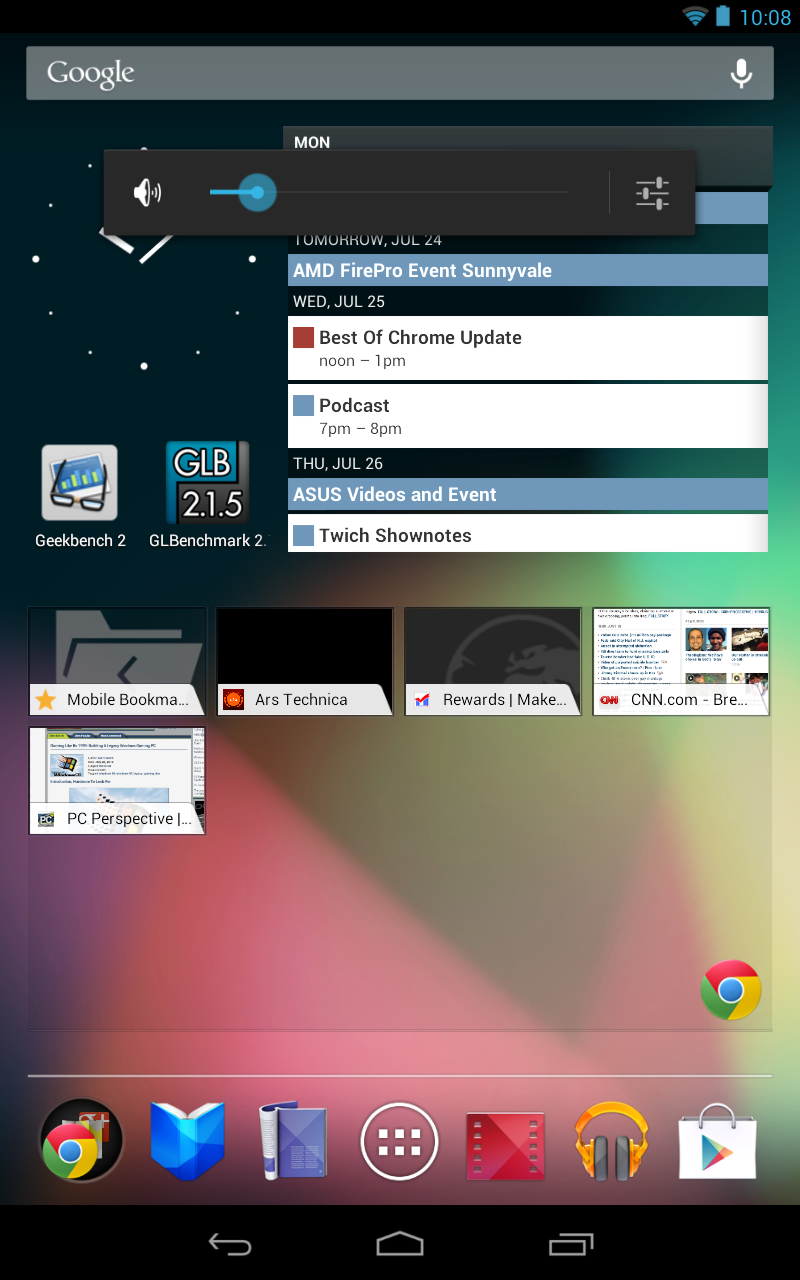 I first took a look at Android 4.0 on the Transformer Prime, and to be honest, I wasn’t impressed. Looking at 4.0 on an identical device made it clear that the leap had not changed as much as I’d hope. Bugs were still easy to find, responsiveness still was not up to iPad levels, and most of the interface remained similar to the previous incarnation of Android on the same device.
The Nexus 7 ships with Android 4.1 (aka Jelly Bean), however. One of the biggest enhancements is Google’s “Project Butter.” The company says its developers and engineers worked hard to implement improvements like triple-buffered graphics and OS-wide Vsync. We’ve heard similar things before – so did they get it right, this time? 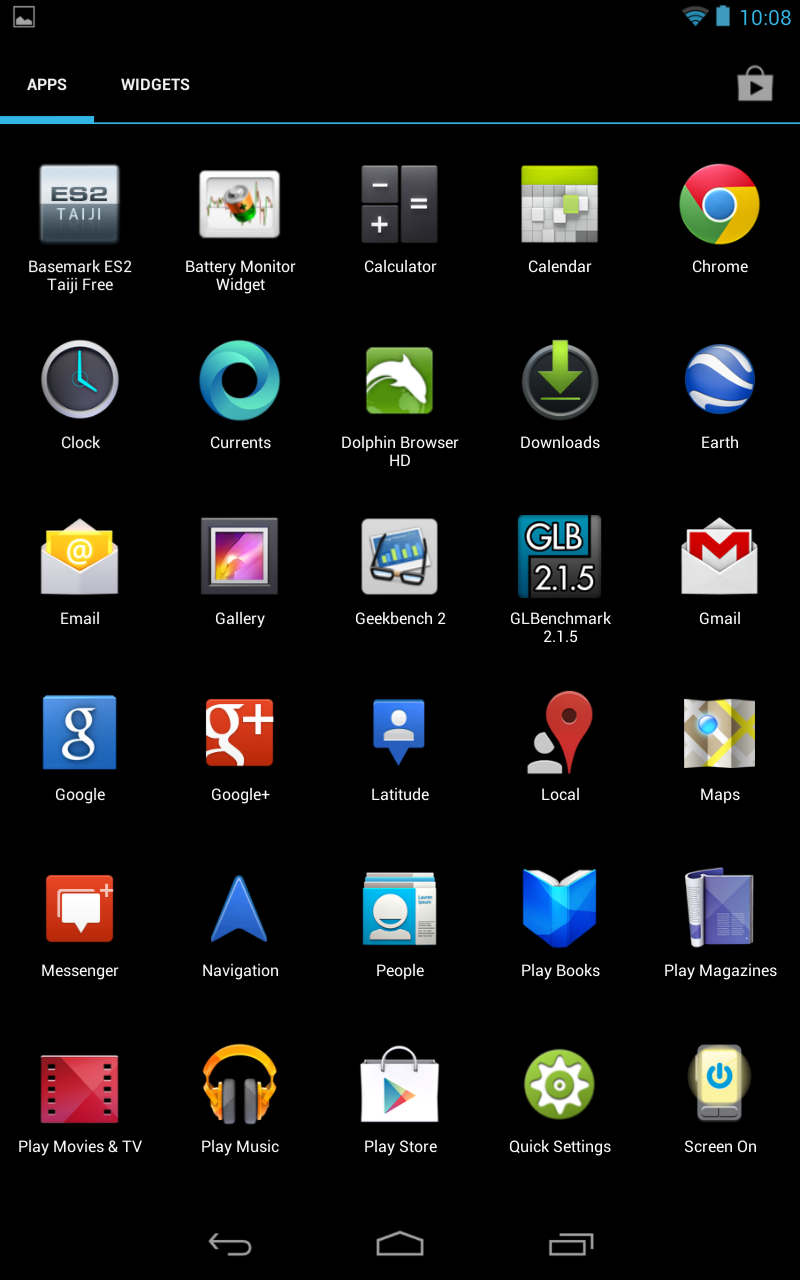 Yes. Finally, we have an Android device that, like the iPad, feels truly in tune with your fingertips. Menus appear instantly, apps appear and disappear without jerks or pauses in their animation and web browsing almost never hangs. The Nexus 7 doesn’t have particularly powerful hardware, but it feels faster than any Android tablet I’ve previously used because of these improvements.
Interface Tweaks 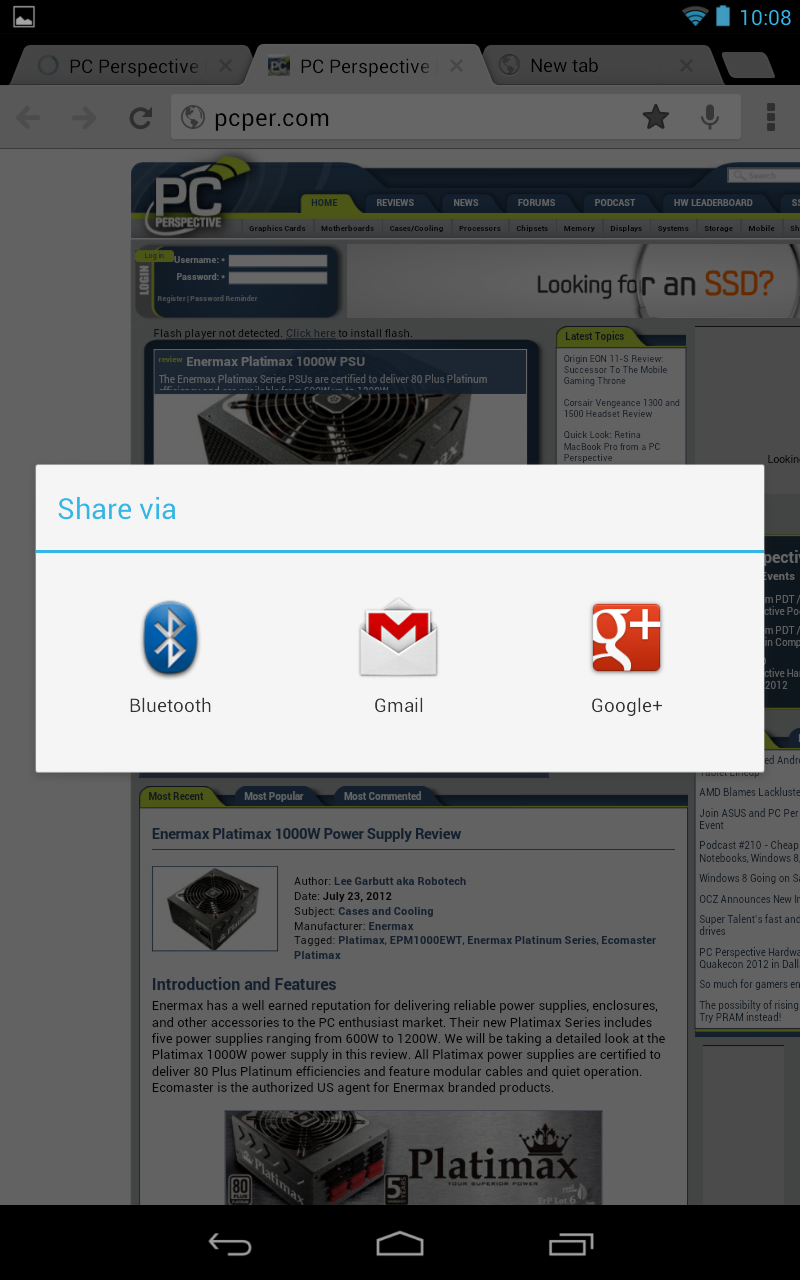 As usual, Google has also used 4.1 to introduce a number interface tweaks. One I noticed right away app widgets that automatically resize. Back in the day of Android 2.3, which is what currently runs on my Android phone, widgets could be of only one size. To accommodate different spaces on your screen developers have to make entirely different widgets, which appear separately in your widget menu. It’s pretty infuriating. 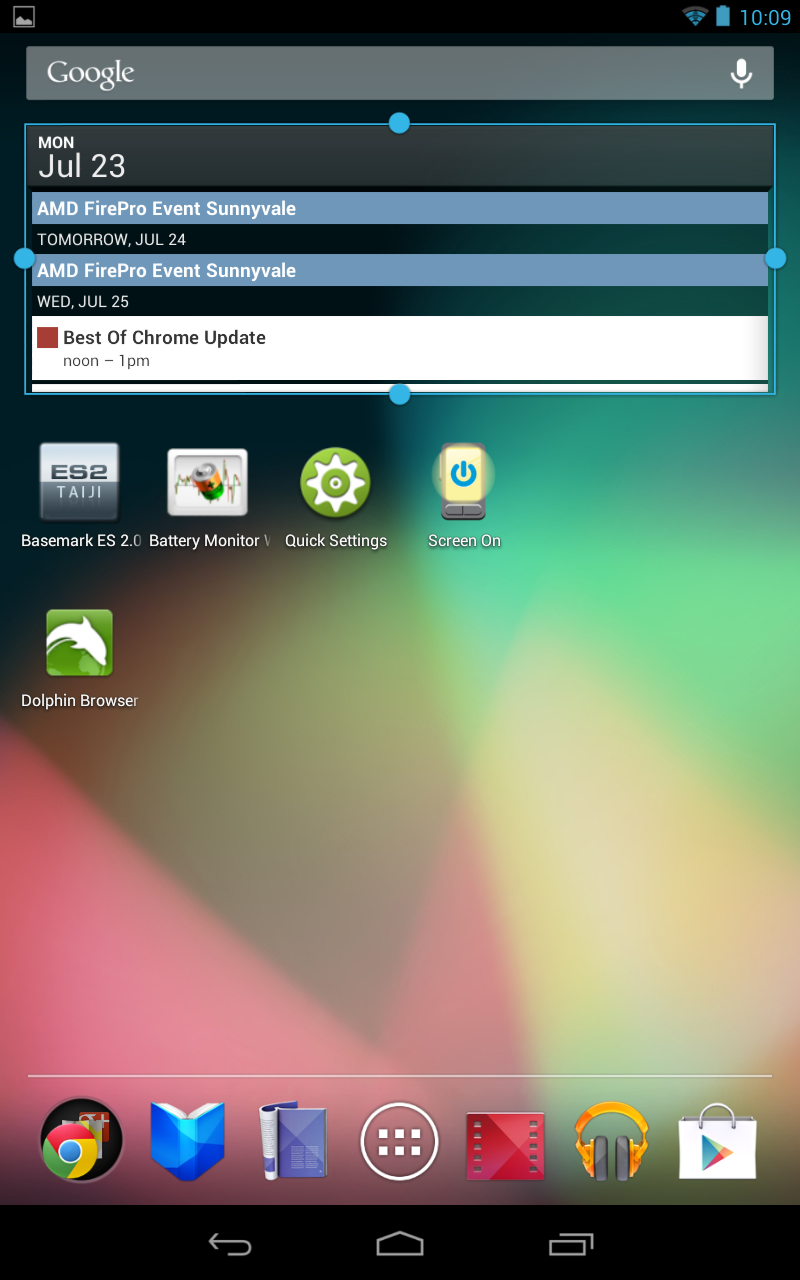 That’s no more. Now widgets can automatically resize to fill a space. Developers apparently have control of the minimum and maximum sizes of a widget, but I did not run into those issues. Finding and adding widgets is simpler and easier than ever before.
The new lock screen and new share menu are two other obvious tweaks. Using the lock screen now presents you with a wheel that responds to you touch by illuminating a series of dots with in it – a great graphical effect. Visual tweaks also define the new share menu, which now has a friendly, icon-driven appearance.
Almost A Clean Install 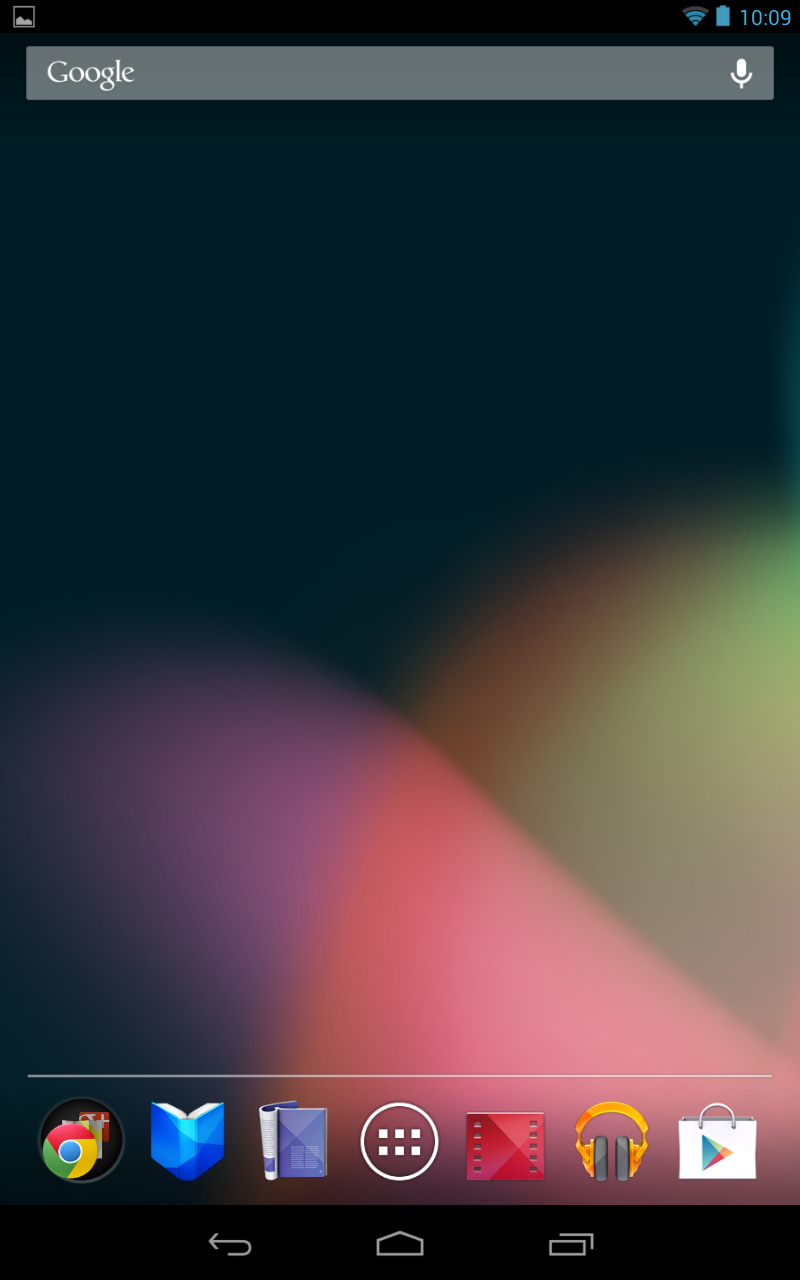 Previous versions of Google Nexus products have been considered reference platforms and/or “pure Android” devices. The Google Nexus 7 seems to deviate just slightly.
The most noticeable example of this is the variety of Google Play content that appears on first boot. Google is very heavily promoting its Google Play store, which can be expected, but the home screen does look a bit like a newspaper’s classifieds section or an unwanted advertisement you’d find crammed in your mailbox. It’s tacky.
On the other hand, there’s no actual bloatware. The pre-installed media is displayed on the home screen via one large widget that can be removed with a simple swipe. It’s not as if users are terribly put out.
Most users will be happy to know that Google has installed Chrome instead of its standard browser. This is not a mandate for Android 4.1 Jelly Bean. Manufacturers will be able to choose between Chrome and the old browser. My question is, uh, why? Why in the world would Google let manufacturers choose to use an inferior browser?
Still A Few Quirks – Mostly With Google Play 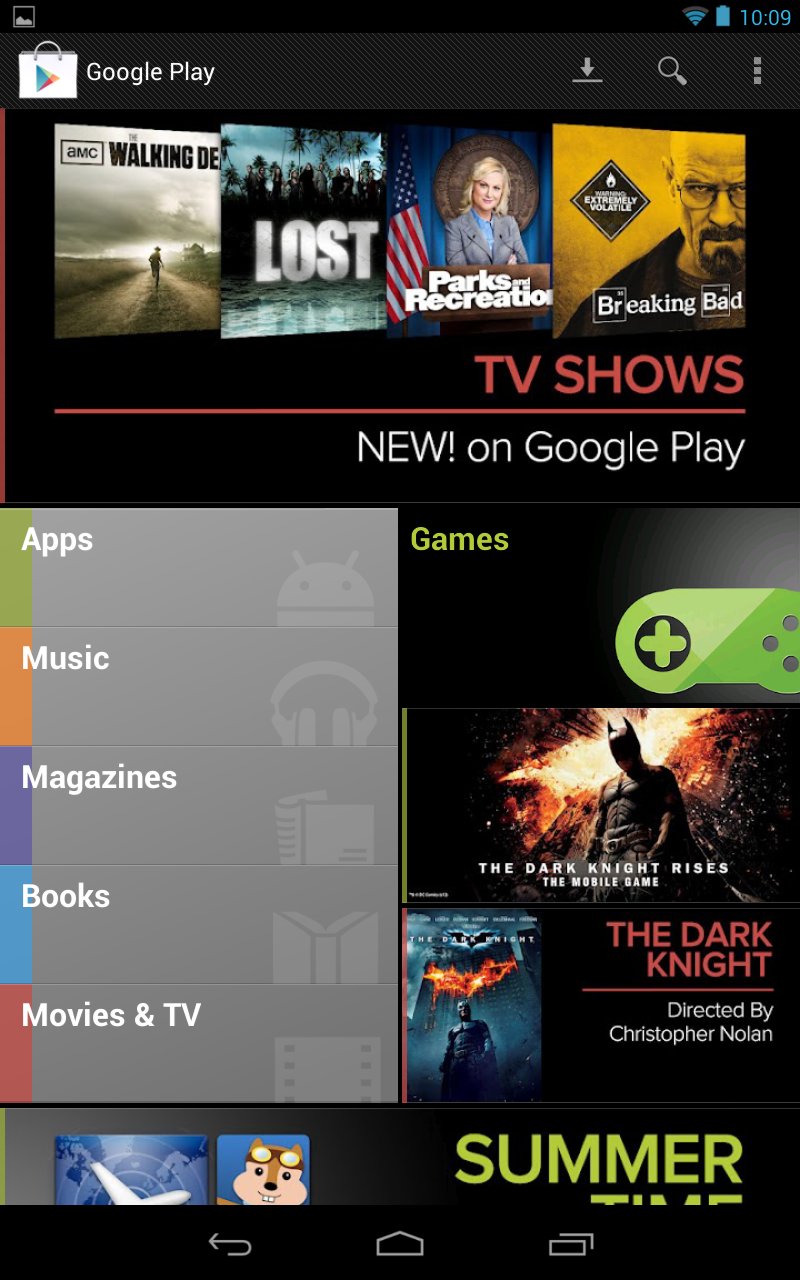 Android 4.1 feels like a larger improvement than 4.0. Most of this has to do with the success of Project Butter. There are, however, still a few issues.
The most serious flaw is the Google Play store. I’ve never liked it, and I like it even less now. The conversion of the Google App Store to Google Play represents a fundamental shift away from focusing on apps and towards focusing on media content. 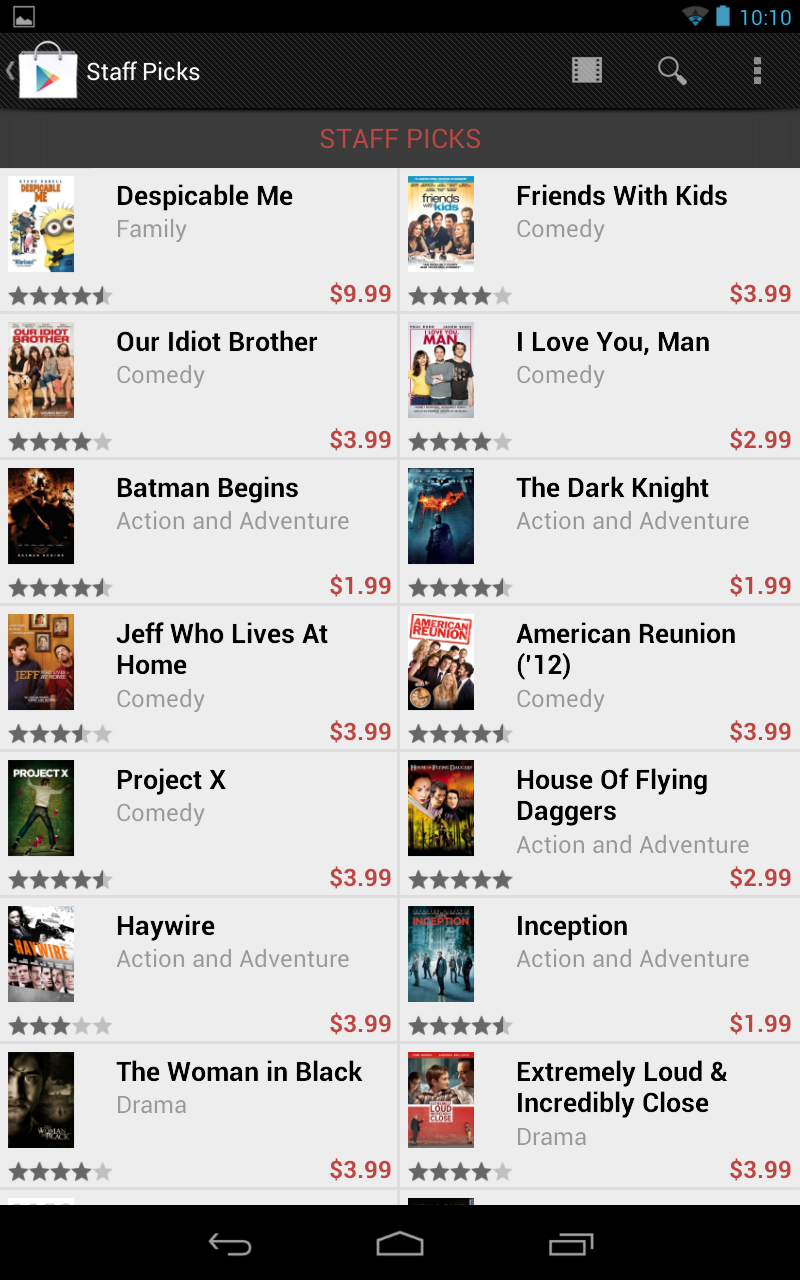 What I despise the most about the media content – video content in particular – is that method used to advertise it is fundamentally based on deception. When you see a list of movies in the store, for example, they are all given prices. But you are not told if that price is rental or purchase until you tap and open the movie’s page in the store. Pricing in that page is also often inaccurate as displayed – often, you will tap buy only to discover that there’s an additional charge for HD.
As if that weren’t enough, I also discovered the movie that I purchased to test Google Play, Anchorman, is not available in HD on your computer if you purchase it on HD for your tablet. The same goes for the copy of Transformers: Dark Side of the Moon that was shipped on the Nexus 7. This anti-consumer nonsense and I hate it.
The search function also still lacks a lot of functionality, such as advanced filters and intelligent search auto-correct, which have been built in to Google’s web search for years. Finding obscure apps in the Play store is never any easy task and usually involves scrolling through a large list of apps that have no obvious relation to what you wanted to find.