I’ve already mentioned several times that the performance of this laptop is nothing to scoff at. I don’t think I’ve spoiled anything by saying that. This laptop had an Ivy Bridge Core i7 quad-core and that means it’s going to be among the fastest laptop’s we’ve ever reviewed, barring some sort of product engineering disaster. Including an Nvidia 640M LE graphics solution serves to round out the package nicely.

To provide competition for the Lenovo IdeaPad Y480, we’re going to be using the ASUS N56VM (the Ivy Bridge reference laptop), which packs a faster Core i7 quad but less powerful Nvidia GT 630M graphics. We’re also going to reference the AMD Trinity reference laptop and the older Dell XPS 15z, which had a Sandy Bridge Core i7 dual-core and Nvidia GT 525M graphics.

All of these laptops hover around the same price range and all are well-rounded multimedia laptops with capable processors and GPUs suitable for light gaming. 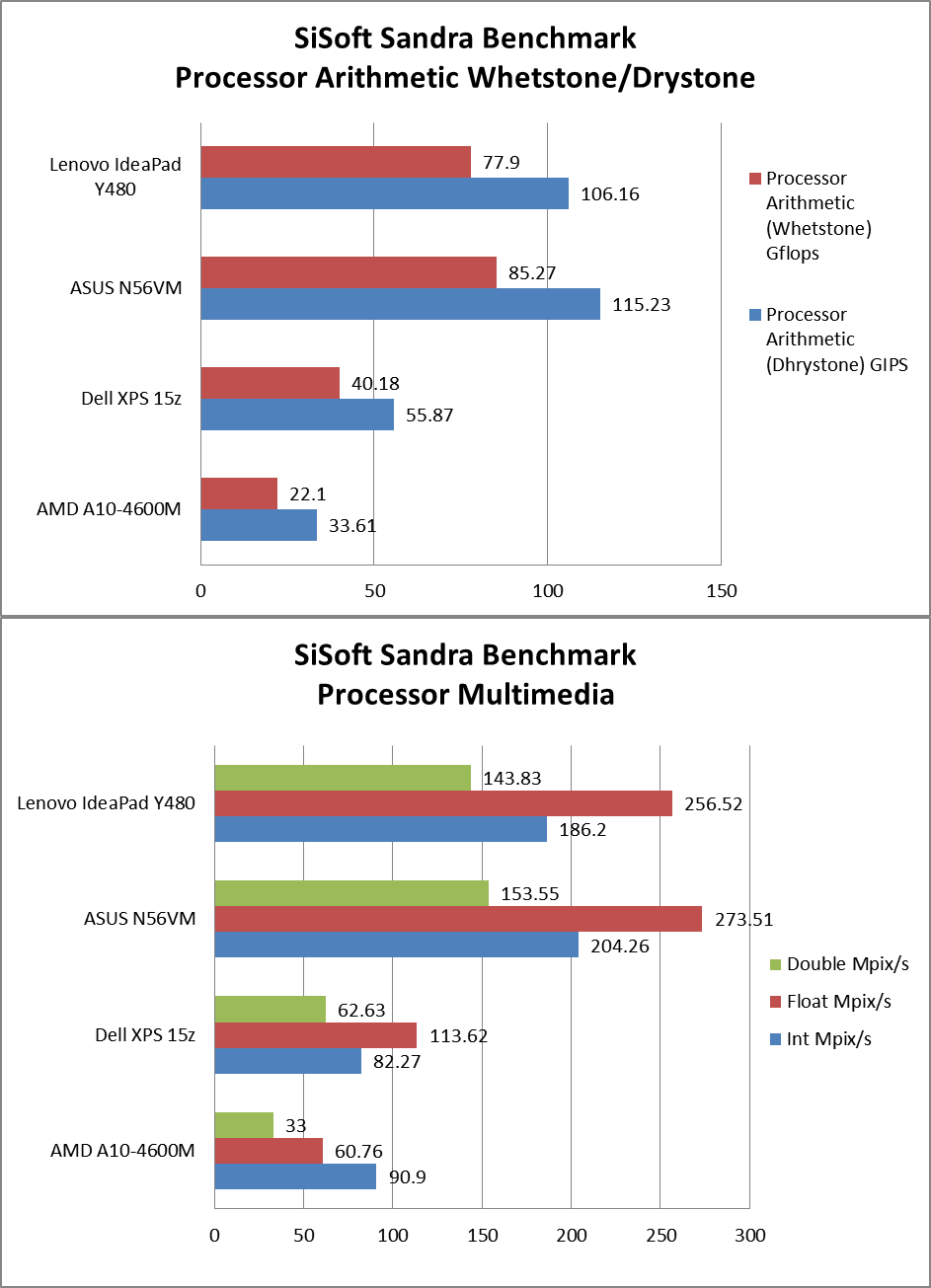 Ever since we looked at our first Ivy Bridge quad-cores I’ve wondered what the real difference is between the least expensive model and the more powerful version we’d received in the reference platform. Now we have the answer – not much. The Core i7-3610QM still offers excellent raw performance.

Let’s see how it stacks up in 7-Zip and Peacekeeper. 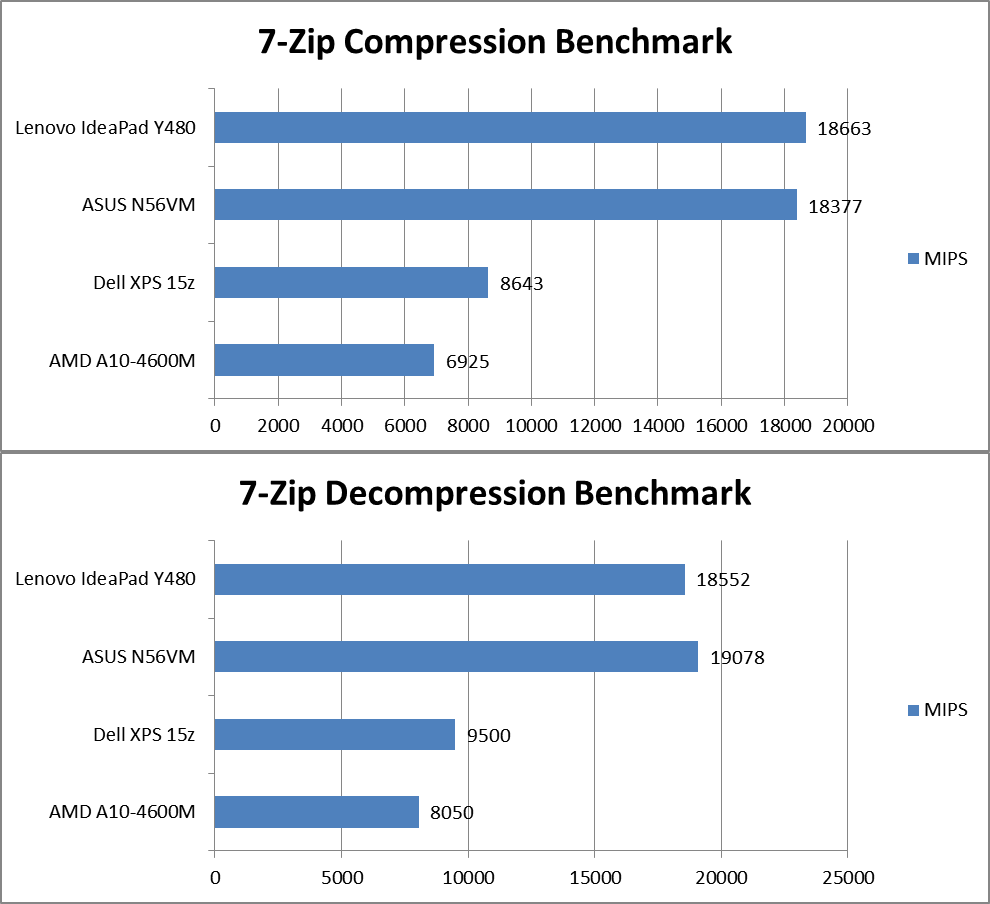 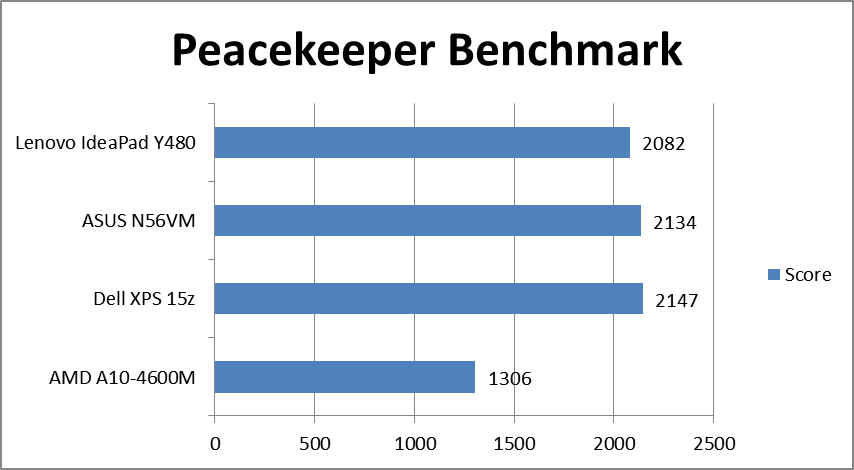 7-Zip, which is extremely well optimized for multiple threads, shows the Ivy Bridge quad-cores walking away from the other competitors but not offering much variation between each other. This is to be expected considering the workload of that benchmark.

Peacekeeper, which emphasizes clock speed over multi-threaded performance, shows all of the Intel processors trading blows while the AMD A10 sits far behind. The overall victor is actually the Sandy Bridge Core i7 dual-core in the XPS 15z. This is not a surprise because it offers high clock speeds.

Now we enter the general processor performance benchmarks. These two really aren’t benchmarks at all, but simply CPU-bound real-world applications. We test how long the tasks require to complete using a stopwatch.

Let’s start with Windows Live Movie Maker, which sees us saving a video project in 1080p. 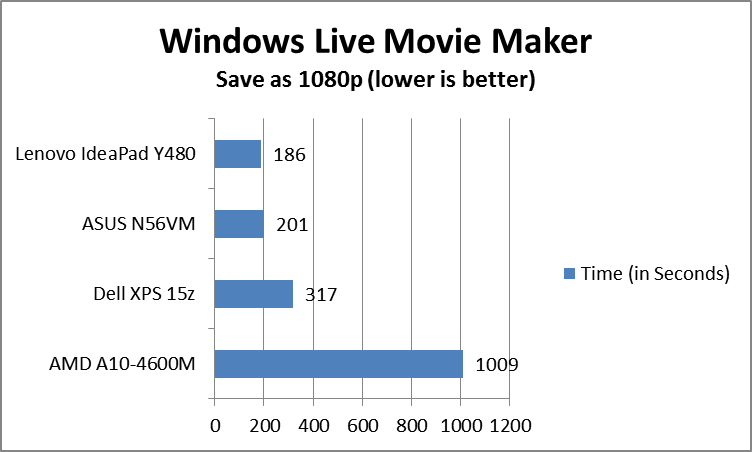 The Core i7-3610QM in the IdeaPad Y480 actually wins this competition with a small gap that I’d just about consider within the margin of error (for reference, the ASUS G75V gaming laptop with the same Core i7-3720QM as the ASUS N56VM was exactly 20 seconds quicker than the Y480). The older dual-core Sandy Bridge in the XPS 15z is way behind, and the AMD Trinity system is way behind that.

Now let’s look at SunLit Green BatchBlitz. While Windows Live Movie Maker has proven itself to be quite well optimized for multiple threads, BatchBlitz hasn’t. Which is why we use it – many real-world programs don’t make the best use of multiple threads and it’s good to see how that might impact the performance picture. 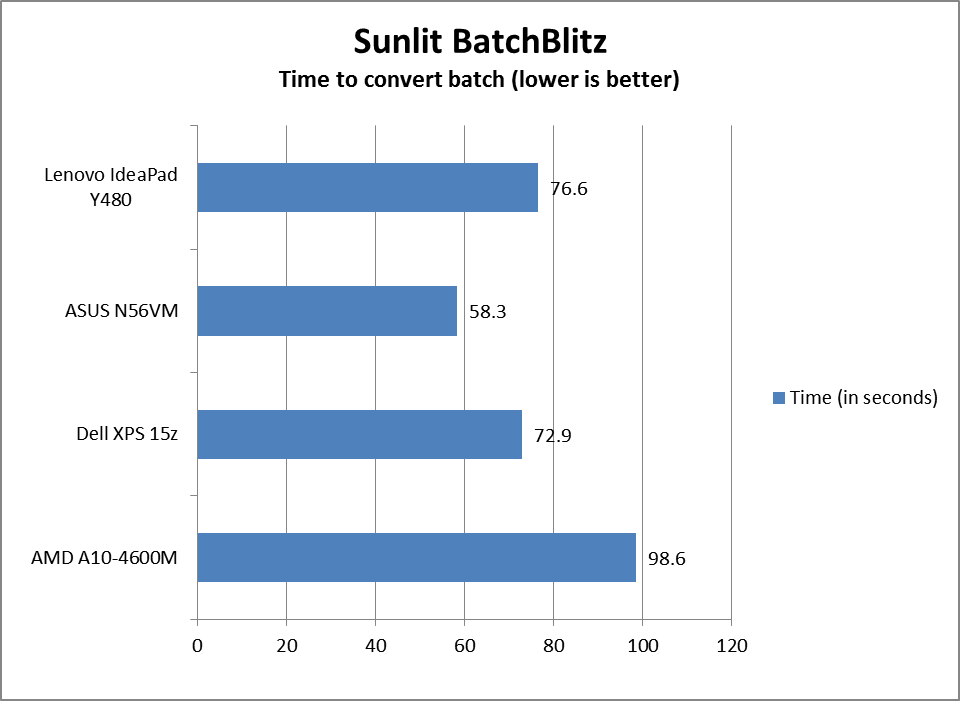 In this workload we can see that the Core i7-3720QM in the ASUS N56VM is the clear victor while the older Core i7-dual core and the new Core i7 quad-core trade blows. The A10-4600M is still a fair bit behind, but it manages much better than it did in Windows Live Movie Maker.

Though there are solid state drive options available for the Y480, our laptop came with a relatively basic 750GB mechanical drive (the Western Digital Caviar Blue) that spins up to 5400 RPM. This doesn’t seem like a performance knock-out, so let’s see if that’s the case. 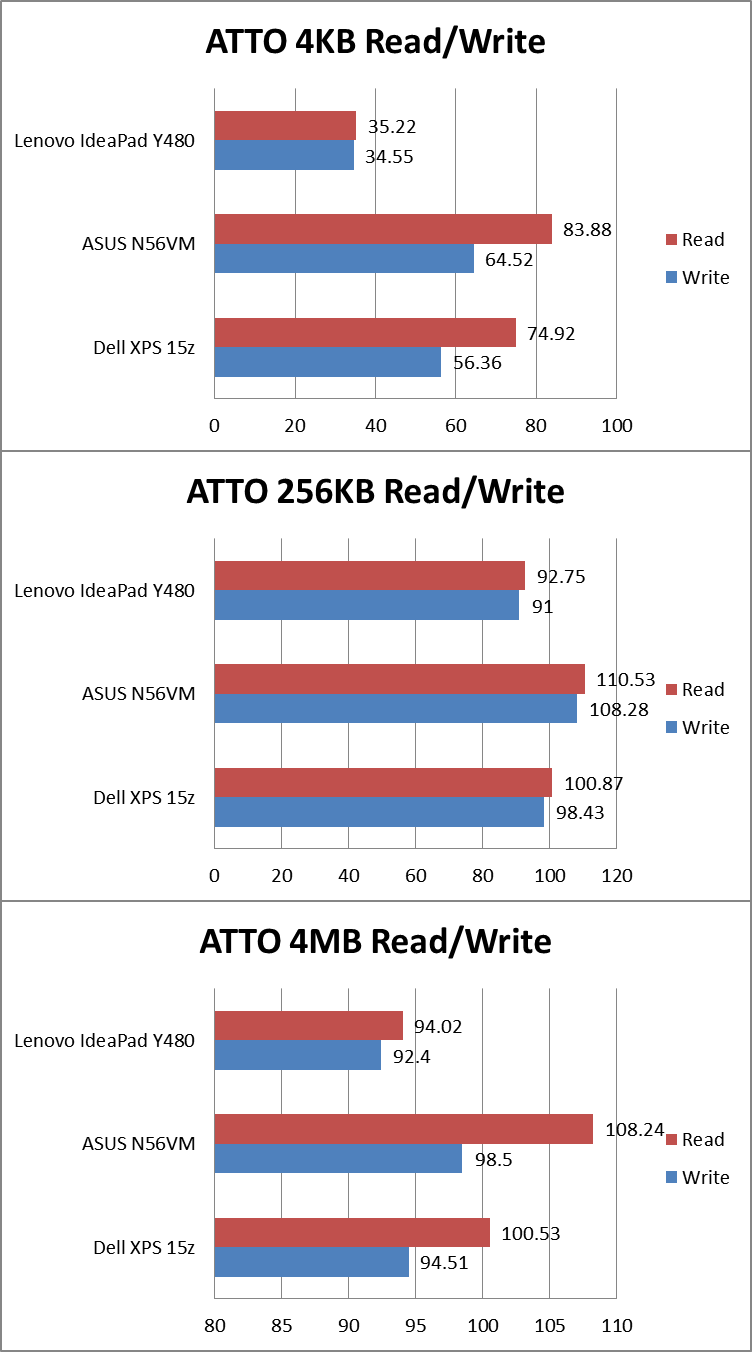 The Y480 performs poorly in ATTO, providing results that are consistently below the drives found in the competitors. The 4K Read/Write speeds look particularly bad. It’s not as if the other competing laptops had 7200 RPM drives, either – they also had 5400 RPM models.

We’ll see if HD Tune backs up these results. 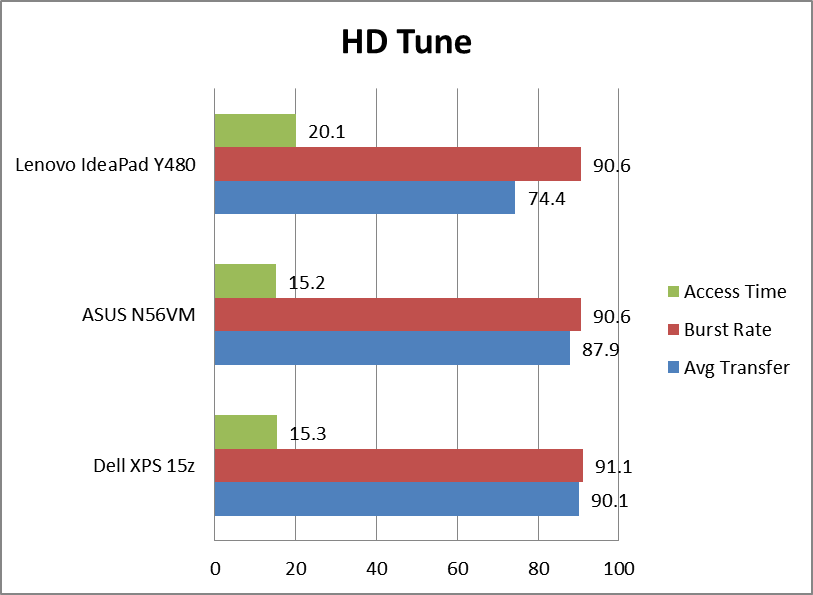 These figures confirm what ATTO found – the drive in the Y480 isn’t fast. It has the longest access times of this bunch and the lowest average transfer rate. It does manage to offer a competitive burst rate but, of the figures we record from HD Tune, this is the least important.