The big addition to Hawk is that of the GPU Reactor.  This piece of equipment is simply a separate PCB that is attached directly behind the GPU.  It is comprised of a series of tantalum capacitors which help to “condition” the power being delivered to the GPU.  Theoretically it should allow for higher overclocks as there is a more consistent and even flow of power to the GPU.  On air cooling this part makes very little difference, and could account for a handful of MHz faster performance.  Where it really shines is when higher end cooling solutions (think water and LN2) are utilized.  The GPU Reactor should give several tens of MHz better overclocks than when used without.  Other than that, it glows a somewhat pretty blue in a windowed case.  The problem with this is when the card is used in CrossFire solutions.  I tried this out, and unfortunately I had clearance issues with a standalone soundcard I had installed in the machine.  I was unable to move the soundcard around in my case, so I was left with either sticking with one card or removing the GPU Reactor. 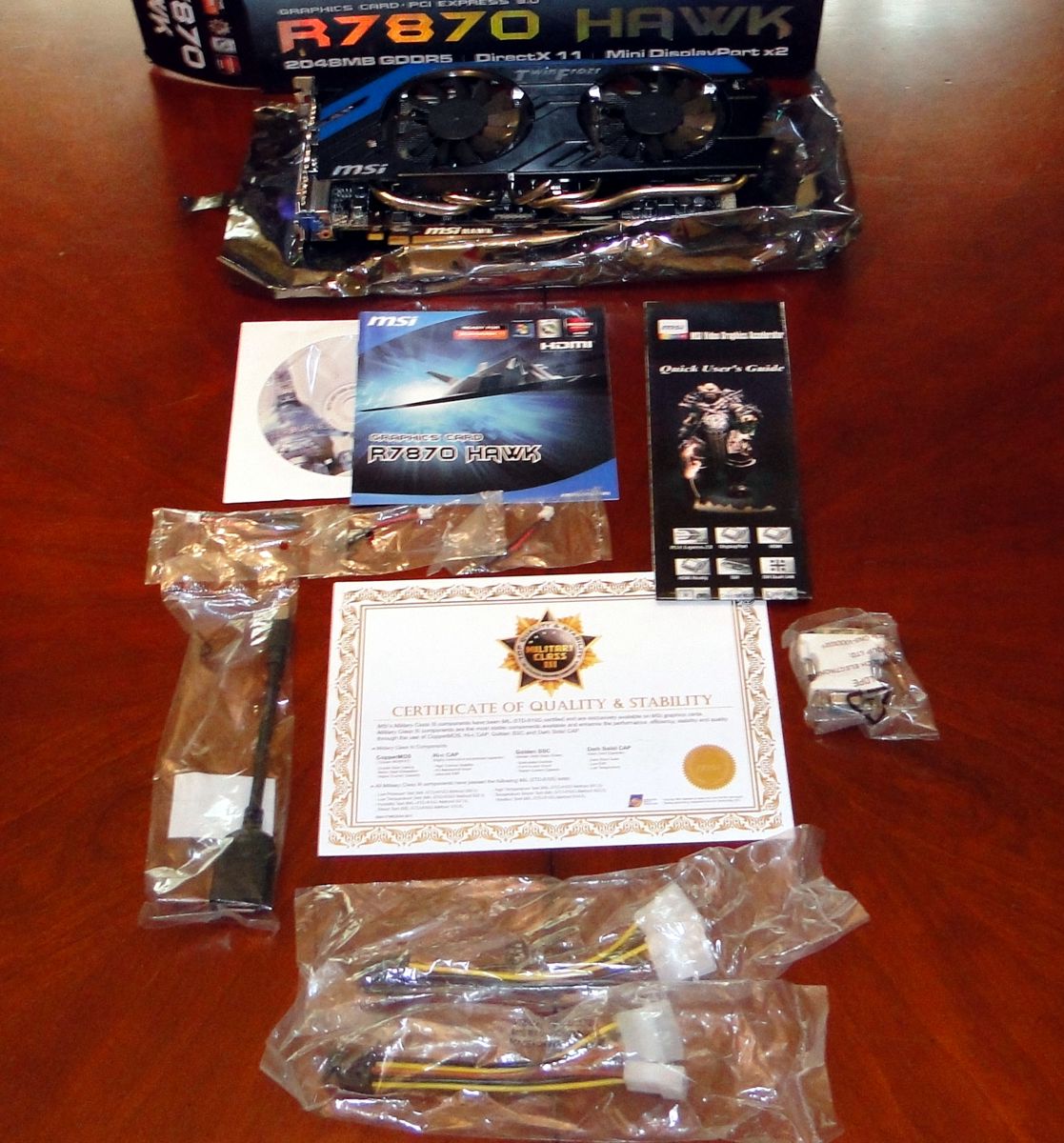 The bundle is pretty strong for the price that this product is offered at.  Note the mini-DP to DP adapter, which is not a common add-in for most board vendors.

The next addition is that of the dual BIOS switch.  This can either be set to normal, which has all of the overvoltage and PowerTune safeguards in place.  The other setting totally unlocks the BIOS and PowerTune settings.  This really should only be used with heavy duty water cooling and LN2.  It is of limited use on air cooling, and the GPU will overheat long before these unlocked settings would actually be useful.

Most of the latest MSI designs feature the digital PWM controller, which is faster and more efficient than the older generation of analog controllers.  This card embraces the Military Class III components, so it is a bit more resistant to physical and electrical shocks than the reference designs.  It should also last longer due to better heat tolerance of the different types of capacitors used on this board.  These components include the CopperMOS (MOSFET), Hi-C cap (tantalum), Golden SSC (choke), and the Dark Solid Cap (polymer based).

The board is also more robust when it comes to power phases.  MSI integrates 8 phases for the GPU, 2 phases for the memory, and a single phase for the VDDCI (PCI-E connection/controller).  The setup also routes the power from the two PCI-E connections to the GPU and memory directly, which apparently is slightly more stable than the power coming from the actual slot on the motherboard.

The board uses two 80 mm fans over a large array of aluminum fins.  These fins are connected to a bottom copper plate as well as five heatpipes (two of which are 8 mm units- aka Superpipes).  These fans are of the “Propeller Blade” variety that is found on the higher end Lightning series as well as the Twin Frozr III/IV units.  MSI integrates the anti-dust mechanism into this product, which reverses the fans’ direction so they suck dust out of the cooling fins of the card.  After 30 seconds the fans spin in the normal direction to blow air over the fins.  This may or may not actually work as advertised, but it is certainly as good an idea as any on how to remove dust effectively from the heatsink.

The R7870 HAWK is a sharp looking card with the black and blue color motif.

Finally we have the triple/triple, or the 3×3 OC Kits as MSI labels it.  There are first of all three voltage checkpoints for those who are using LN2 and are constantly monitoring voltages.  The second is the triple overvoltage where a user, using the Afterburner software, can increase the voltage on the GPU, memory, and VDDCI.  Thirdly there is the triple temperature monitor, which is also accessed by the Afterburner software.  With these three overclocking tools, users should be able to finely tweak this board to its maximum potential on air, water, and LN2.

The MSI box is always nicely produced and the packaging is above average.  The board does not move, and is surrounded by a generous amount of foam and the anti-static bag.  The box itself lists off all of the features of the board and presents the card to the user through a transparent window in the box.  Between the outer transparent layer, the plastic covering inside the box, and finally the anti-static sleeve… it is very hard to actually see the card while it is still in the box.

The card itself is fairly large.  It reaches nearly 11” in length and is a pretty hefty unit.  The heatsink is larger and has more fins than the competing XFX Double D Black Edition 7870.  The board itself is very rigid due to the extra bracing that MSI includes in the design.  This unit should not warp to any significant degree when installed in a computer.  The dual-form-in-one heatsink covers many of the power components on one side of the card, and on the other a backplate adds to the rigidity of the board as well as protecting the rear components. 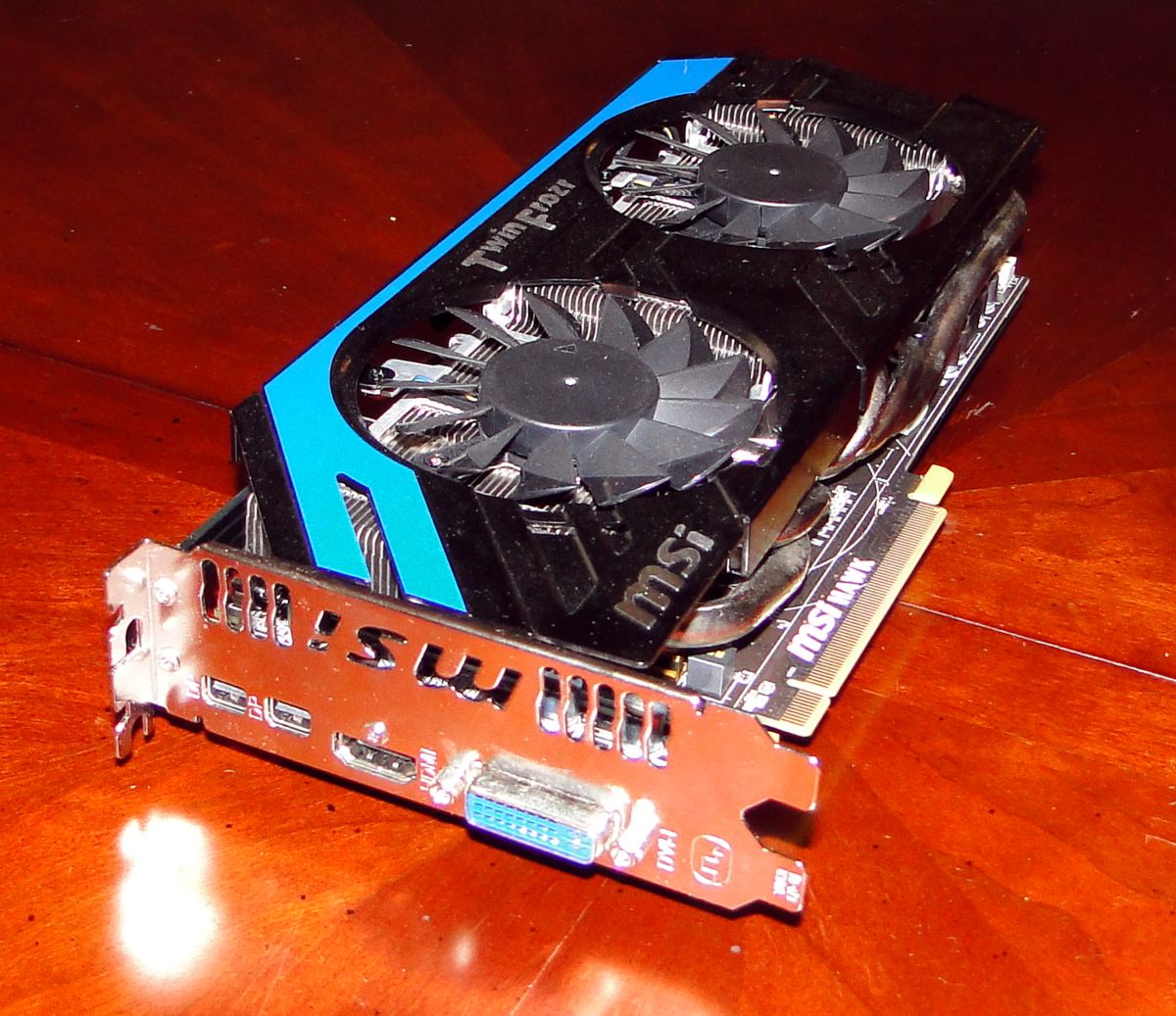 We are missing a DVI port, but that is something that can be fixed by throwing more money at active DP to DVI adapters.

Build quality is above average.  Nothing was falling off the card, the solder looks even throughout the board and the components.  The housing is made of metal and not plastic.  The color scheme is pleasing to the eye, and the GPU Reactor on the back does provide a bit of flair for those with windowed cases.

The only real issue I had with this card was the output collection.  It features only a single dual-link DVI port.  Other competing products have two DVI ports, one of which is again a dual-link unit.  These cards can natively support up to 6 monitors, so one would expect there to be at least two DVI and two DisplayPort connections.  I realize that this is somewhat nit-picking, but that is what I get paid to do.  If a user wants to run these in Eyefinity, then they must either have monitors with native DisplayPort connectivity, or they need to purchase two active DisplayPort to DVI adapters (approximately $25 each).

My expectation was that this card would be as cool and as silent as previous versions were.  This did not exactly hold true.  I will discuss this further in the overclocking/power/temperature page.

Overall my impressions of the card are positive.  MSI does a nice job with their designs overall, and the packaging and bundle met expectations.  A nice extra that I appreciated was that of the mini-DP to full size DP adapter.  Most other manufacturers do not include such adapters.