Performance – Competitors
A small gaming laptop such as this straddles the line between its larger brethren and multimedia laptops that just happen to have a powerful GPU. There’s no doubt that the EON11-S is built for gaming, yet the restrictions its size places on hardware inevitably results in a laptop that could be matched by alternatives not explicitly built for gaming.
The competition I’ve chosen varies as a result. Lenovo’s Y480 and the ASUS N56VM, which include the GT 640M LE and GT 630M respectively, represents the kind of graphics capability you’ll find in a typical multimedia laptop with discrete graphics added on (the Origin EON11-S is ironically also representative of that – some multimedia laptops are sold with the GT 650M).
From the gaming stable we have the ASUS G75V, which features an Nvidia GTX 670M. That’s serious gaming hardware and it will be interesting to see how much quicker the GTX 670M is than the GT 650M.
Processor Performance
As always we start off with a pair of SiSoft Sandra benchmarks. We’re not expecting any surprises here because we’ve tested the processor found in this laptop, the Core i7-3720QM, several times before. Does it act as expected? 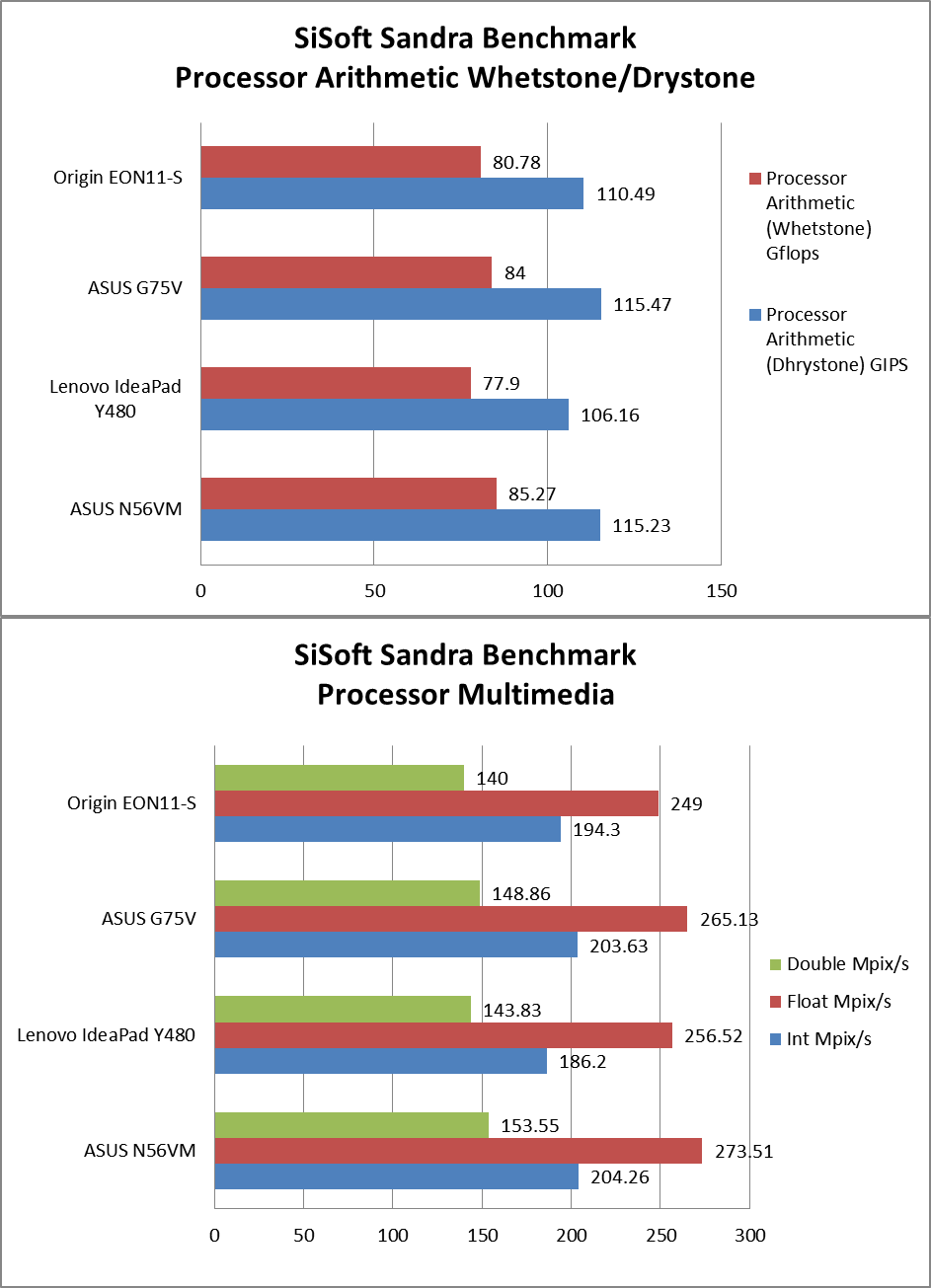 Yeeeep…that’s an Ivy Bridge mobile quad, alright. Though if you look closely you will notice that the EON11-S is ever-so-slightly slower than the ASUS G75V and ASUS N56VM, both of which have the same processor. In the Multimedia benchmark the EON11-S is even slower than the Y480’s Core i7-3610QM.
Does this mean the EON11-S will simply be slower overall? Let’s refer to 7-Zip and Peacekeeper to see what they say. 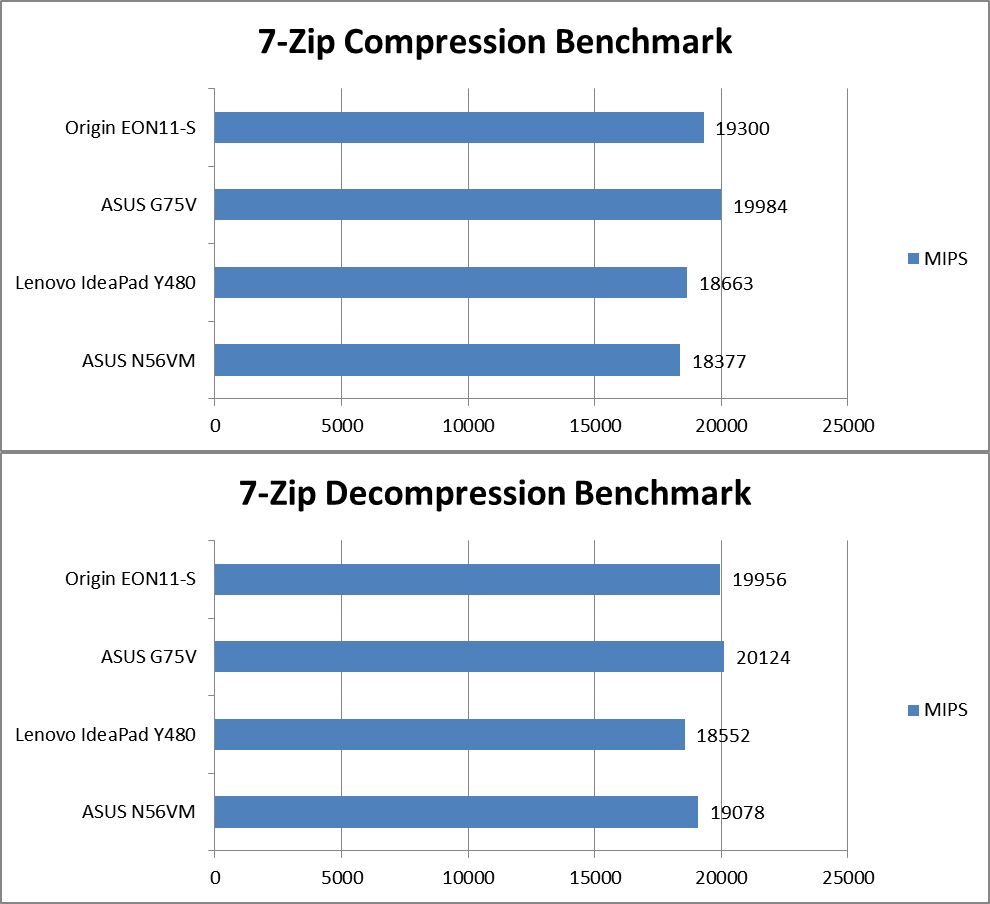 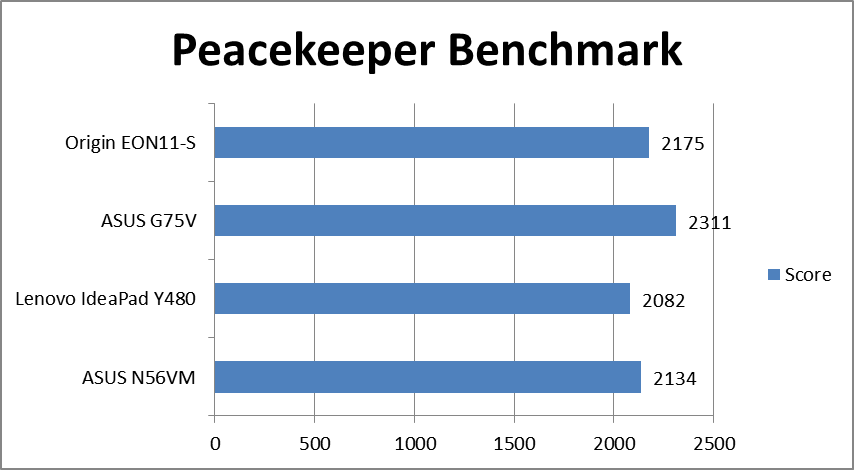 In 7-zip this tiny wonder actually shows itself to be entirely competitive with the others, beating the N56VM and Y480 and playing ball with the G75V. The Core i7-3720QM doesn’t seem to be mind having less space to stretch its legs.
Peacekeeper has nothing different to say. All of the laptops provide similar performance give or take a hundred points here or there. And all of the laptops easily qualify as the best we’ve ever tested.
Application Performance
We temper our synthetic CPU results with two real-world applications that are commonly used. The first of these is Windows Live Movie Maker, the free video editing software from Microsoft that can be used to create simple home movies. We test performance by seeing how long it takes the application to encode and save a video clip to a 1080p .WMV file. 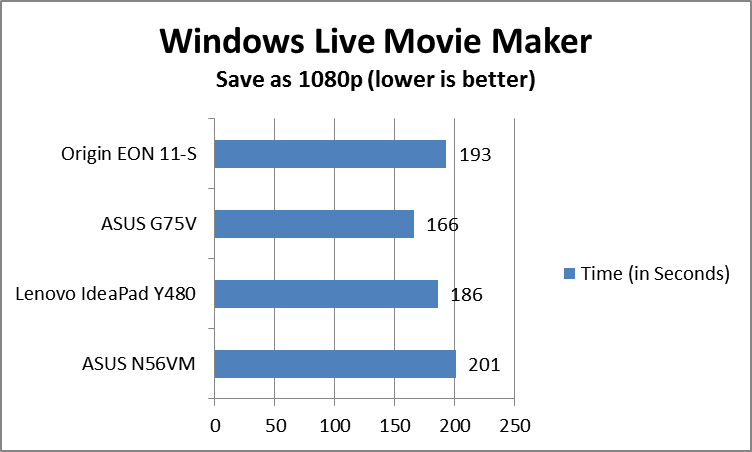 Once again all of the laptops are close, though the margin between them is not insignificant. The ASUS G75V once again proves to be the quickest of the mobile quad core processors while the Origin EON11-S lags slightly behind, coming closer to the Core i7-3610QM powered Y480.
Next up with have Sunlit Green BatchBlitz. This free batch editing software relies on the processor but isn’t perfectly optimized for multiple threads. Which is why I like to use it – a lot of programs rely just as much on clock speed, or are optimized somewhere in-between. 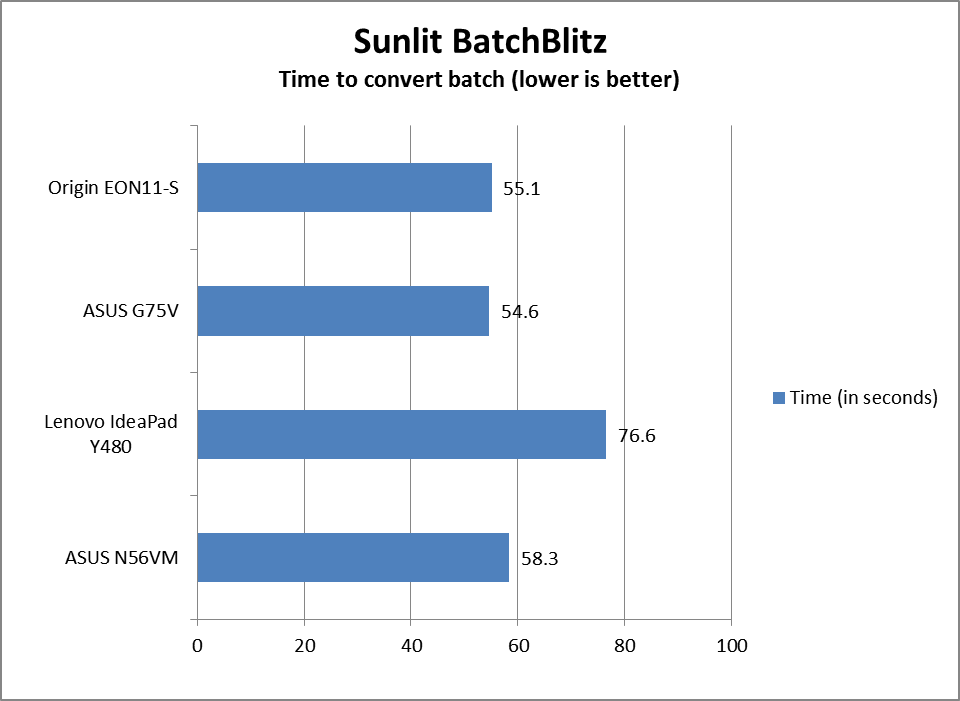 The results here are very tight – all of the Core i7-3720QM laptops perform nearly the same. Only the Y480 and its slower 3610QM is left behind.
Performance – Hard Drive
Our Origin EON11-S review unit arrived with a 256GB Samsung Series 830 solid state drive. Priced at $259 it is much less expensive than the optional Intel Series 520 and Crucial M4. Does this mean it’s only a so-so performer or is this Samsung drive a bargain? 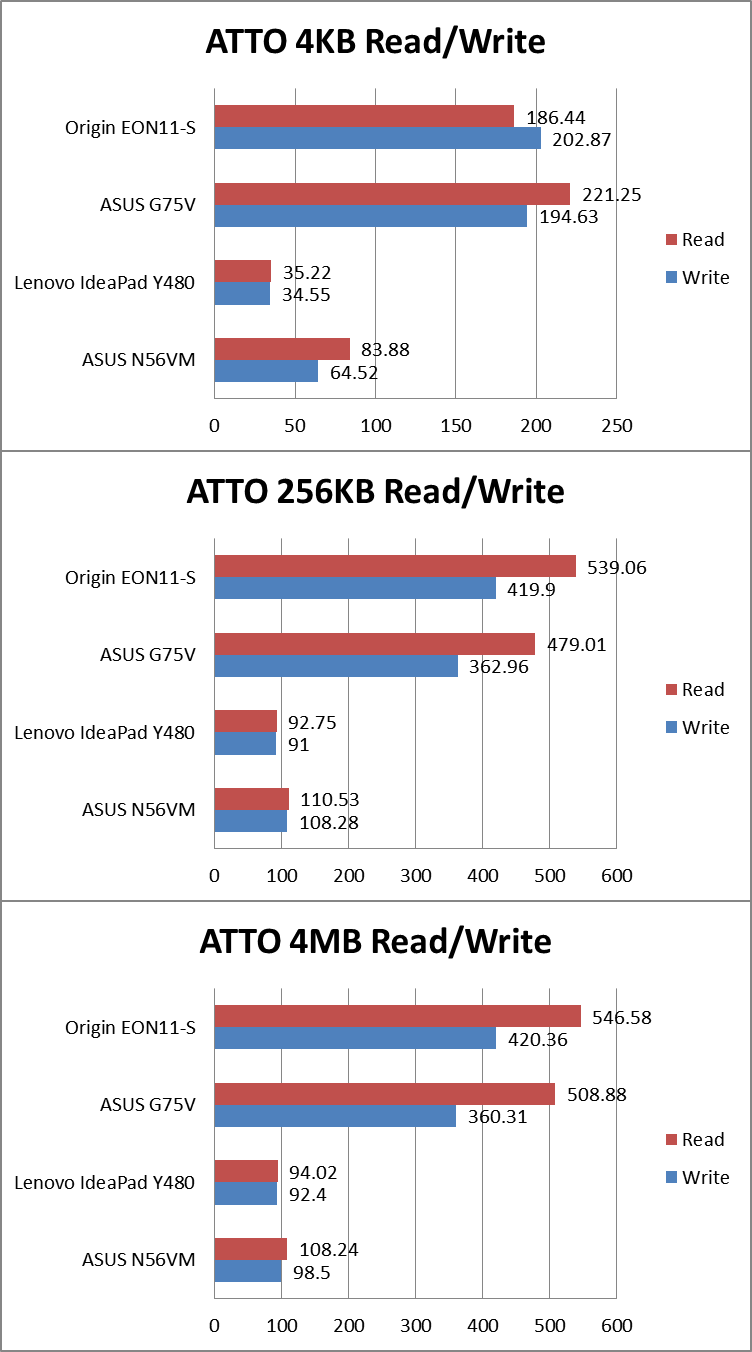 The N56VM and Y480 have mechanical hard drives and have little hope of keeping up with the Origin EON11-S, but the ASUS G75V we received had a solid state drive made by … Lite-On, perhaps better known for its cheap optical drives on Newegg. ATTO makes it clear that the Samsung drive is quicker overall by a fair margin, particularly when writing data.
Does HD Tune confirm these results? 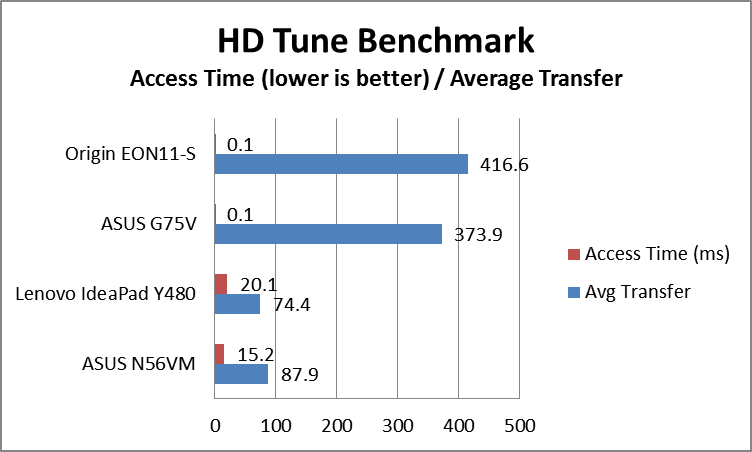 Yes, it does. Overall average transfer speed is quicker on the Samsung 830 SSD than on the Lite-On available in the ASUS G75V, while both offer the same super-low access times. This does not mean that the Samsung 830 is better than the other drive options for the EON11-S, but as I do not have those, I can’t test them. If you want a better perspective on the Samsung 830 you should read Allyn’s full review of the product.