AMD has released a new firmware (which we share) to update the HD 7950 with higher and dynamic clocks.

Back in June, AMD released (or at least announced) an update to the Radeon HD 7970 3GB card called the GHz Edition. Besides the higher clock speeds, the card was the first AMD offering to include PowerTune with Boost–a dynamic clock scaling capability that allowed the GPU to increase clock speeds when power and temperature allowed.

While similar in ideology to the GPU Boost that NVIDIA invented with the GTX 680 Kepler launch, AMD's Boost is completely predictable and repeatable. Everyone's HD 7970 GHz Edition performs exactly the same regardless of your system or environment.

Here is some commentary that I had on the technology back in June that remains unchanged:

AMD's PowerTune with Boost technology differs from NVIDIA's GPU Boost in a couple of important ways. First, much to its original premise, AMD can guarantee exactly how all Radeon HD 7970 3GB GHz Edition graphics cards will operate, and at what speeds in any given environment. There should be no variability between the card that I get and the card that you can buy online. Using digital temperature estimation in conjunction with voltage control, the PowerTune implementation of boost is completely deterministic.

As the above diagram illustrates, the "new" part of PowerTune with the GHz Edition is the ability to vary the voltage of the GPU in real-time to address a wider range of qualified clock speeds. On the previous HD 7970s the voltage was a locked static voltage in its performance mode, meaning that it would not increase or decrease during load operations. As AMD stated to us in a conversation just prior to launch, "by having multiple voltages that can be invoked, we can be at a more optimal clock/voltage combination more of the time, and deliver higher average performance."

The problem I have with AMD's boost technology is that they are obviously implementing this as a reaction to NVIDIA's technology. That isn't necessarily a bad thing, but the tech feels a little premature because of it. We were provided no tools prior to launch to actually monitor the exact clock speed of the GPU in real-time. The ability to monitor these very small changes in clock speed are paramount to our ability to verify the company's claims, and without it we will have questions about the validity of results. GPU-Z and other applications we usually use to monitor clock speeds (including AMD's driver) only report 1050 MHz as the clock speed–no real-time dynamic changes are being reported.

(As a side note, AMD has promised to showcase their internal tool to show real-time clock speed changes in our Live Review at https://pcper.com/live on Friday the 22nd, 11am PDT / 2pm EDT.) [It has since been archived for your viewing pleasure.]

A couple of points to make here: AMD still has not released that tool to show us internal steps of clock speeds, and instead told me today that they were waiting for an updated API to allow other software (including their own CCC) to be able to report the precise results.

Today AMD is letting us preview the new HD 7950 3GB card that will be shipping soon with updated clock speeds and Boost support. The new base clock speed of the HD 7950 will be 850 MHz, compared to the 800 MHz of the original reference HD 7950. The GPU will be able to boost as high as 925 MHz. That should give the new 7950s a solid performance gain over the original with a clock speed increase of as much as 15%.

There will be no rebranding with these parts though–so be prepared to look for stickers and online information to determine whether or not your card is the "new" one with higher clocks and boost or one of the originals. 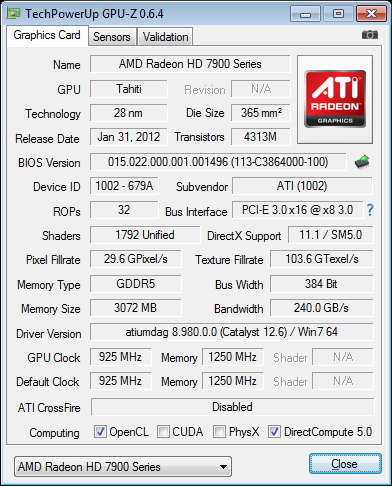 You can see in our GPU screenshot here that the clock speed is reported as 925 MHz, not 850 MHz.  Obviously AMD has some work to do here as without having the ability to properly verify its claims we simply nod our heads while sometimes thinking it is feeding us bullshit. 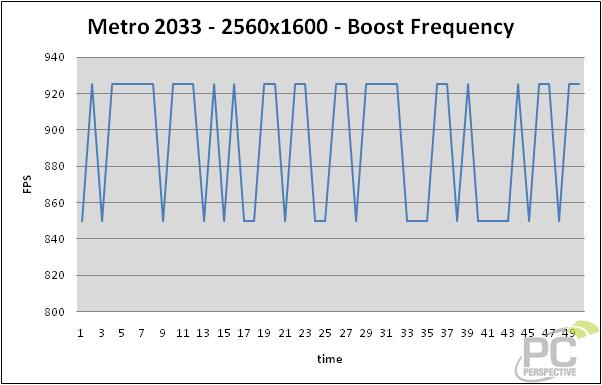 Here you can see what GPU-Z reports while gaming–in this case during Metro 2033. The numbers reported indicate discrete jumps from 850 MHz to 925 MHz, though AMD claims there are 4 MHz increments. Anytime the clock speed is going OVER 850 MHz, GPU-Z (and all other software currently) reports the full 925 MHz. Until we see more, we are simply guessing along with you.

You might be wondering what happens to all those users that have HD 7950s today. Can you get some of this Boost love? The answer is: maybe. AMD is allowing us to share the FW updater with you, but you should note that there is absolutely NO GUARANTEE that it will work–and that it will not brick your card in the process. If your card has a dual BIOS switch on it, you are going to be pretty safe though. Simply apply the patch as administrator with the switch in position 1. If anything goes wrong you can move the switch back to 2 and boot at standard clock rates, etc.

In actuality, it is up to the AIBs to test and distribute the flash on each of their SKUs, but if you want to give it a shot yourself, feel free. But don't come running to me if it bricks or fries your card!! 🙂

As for availability of new cards based on this BIOS, AMD says that they will be available on or before the 16th of August…though the recent track record with the HD 7970 GHz tells me to wait until they are actually for sale to trust in those claims.

On the following pages you'll see our usual collection of benchmarks for you that compares the original stock HD 7950 3GB card to the new HD 7950 3GB with Boost firmware. Due to time constraints we are moving ahead in our coverage…aka we wanted to get this posted ASAP before I had to head out of town. So please excuse the lack of commentary along the way…