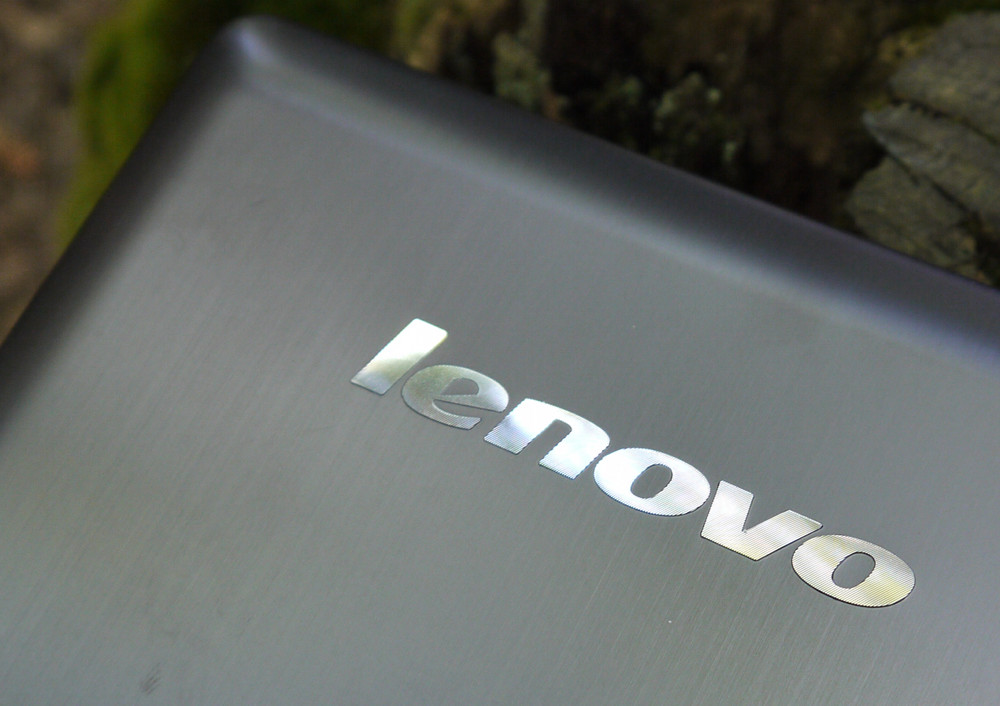 The Z580 is one of the least expensive systems we’ve reviewed in some time. It has a Core i5-3210M dual-core processor and lacks discrete graphics.

We do have some competitors to place it again. One of these is Lenovo’s X230 which, though much smaller, includes a comparable third-generation i5-3320M processor. That’s a part that is currently found in, or will be found in, many laptops.

We’re also going to throw in the Intel Ivy Bridge reference platform, which includes a low-voltage third-gen Core i5, and the ASUS N56VM, which offers the powerful Core i7-3720QM. This provides a good range of new processors (and new Intel HD 4000 graphics) against which we can judge this laptop.

We start, as always, with SiSoft Sandra’s Processor Arithmetic and Multimedia benchmark. 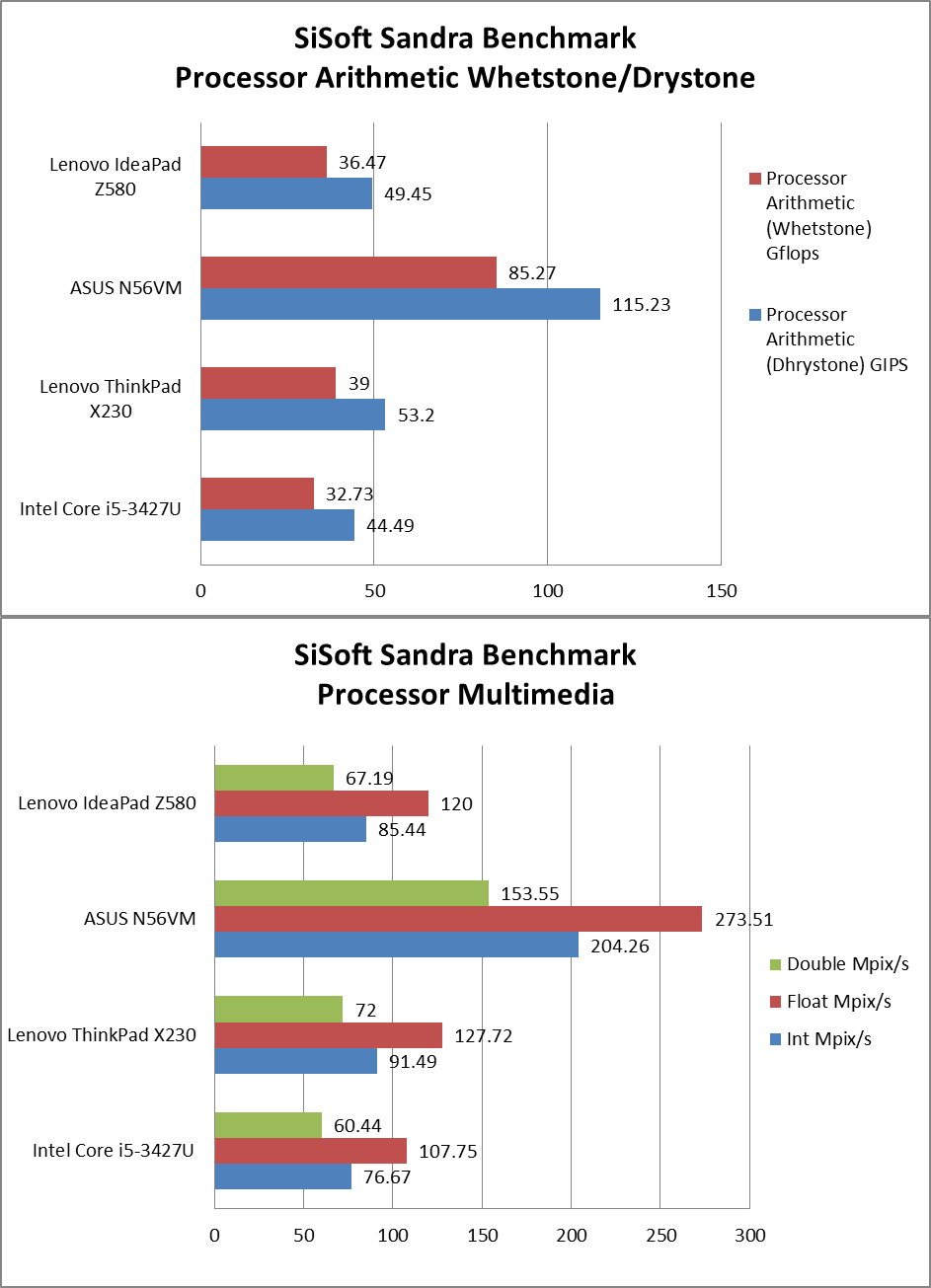 It is surprising how small the gap between the Z580 and X230 is in this benchmark. When I compared previous quad core parts with their Sandy Bridge equivalents I felt the performance difference was significant. Here, comparing dual core parts, it seems there’s little to separate them.

Let’s see if 7-Zip and Peacekeeper of any different results. 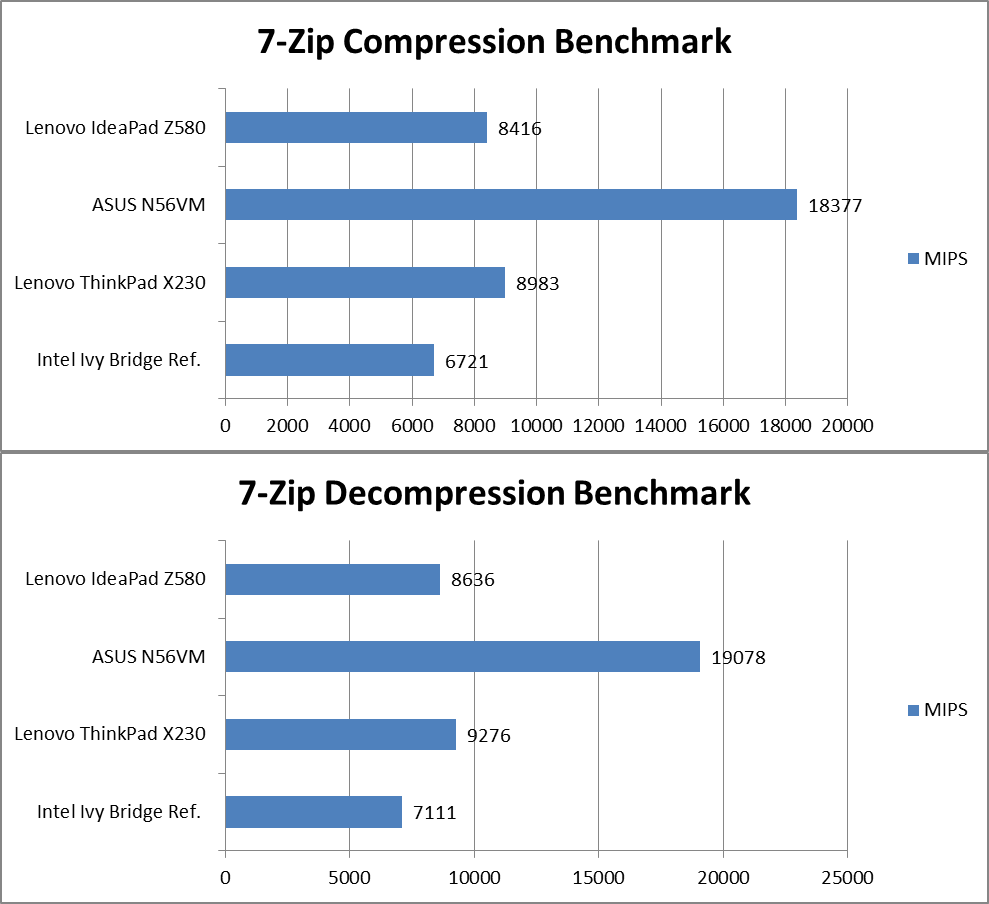 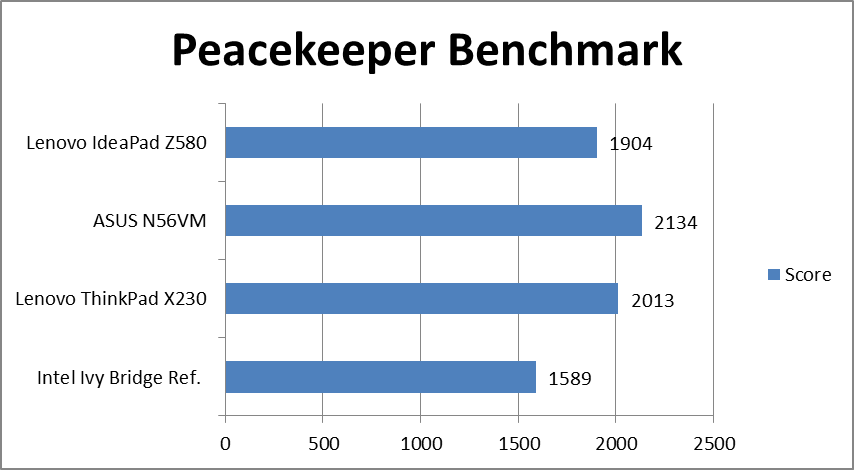 7-Zip is a bit kinder to the newer processor and shows a notable separation, but Peacekeeper brings us back to the same old story. Overall, our synthetic tests don’t show much difference between the Core i5-3210M in the Z580 and the Core i5-3320M in the X230.

I like to temper our synthetic performance results with some processor-intensive applications that are commonly used. The first of these is Windows Live Movie Maker, which I use to encode a HD video clip to a 1080p .WMV file. 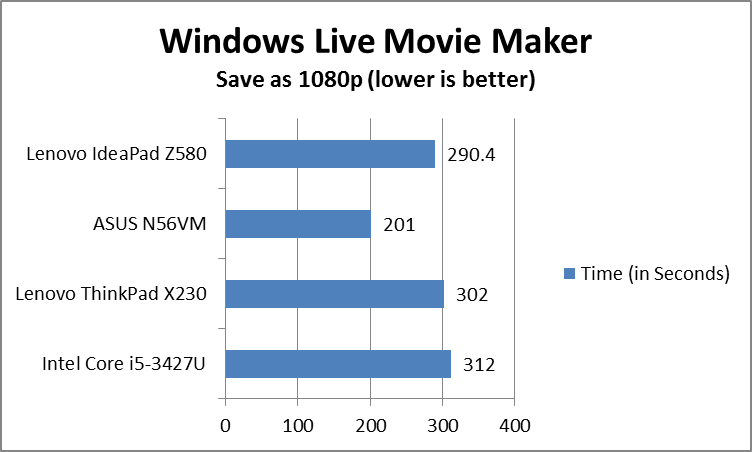 Here’s a surprise – the Z580 actually performed a bit better than the X230 in this particular benchmark. I mentioned in the X230 review that the laptop seemed to do particularly poorly in that scenario, but after testing it numerous times I could find no reason to question the results. The small gap between the dual cores in our synthetic results does suggest to me that it would not take much of an anomaly to cause this result. In the case of the X230, that anomaly may be the laptop’s small size. 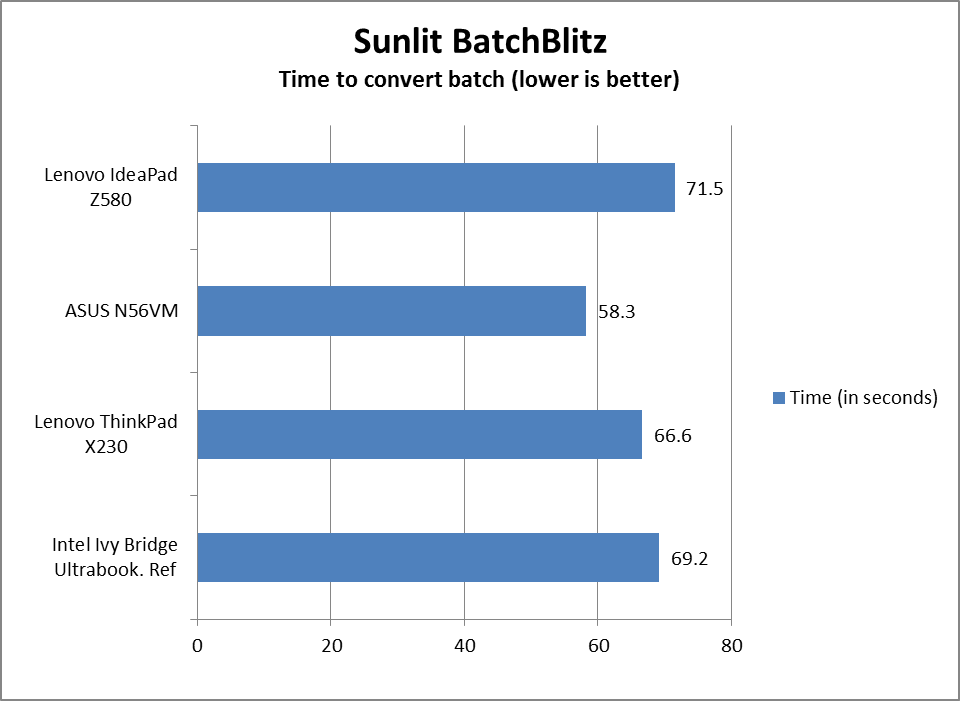 This time around we do see that the Z580 falls behind the pack, in fact, even the Ivy Bridge ultrabook manages to beat the low-end standard Core i5. Sunlit is not a program that fully loads multiple threads, so this provides plenty of chance for Turbo Boost to come out and shine. This also results in the Core i7-3720QM squeaking out only a small lead instead of dominating.

Our Z580 came with a simple 5400RPM laptop hard drive provided by Hitachi. We’ve tested a lot of products with solid state drives lately, either for caching or for the entire storage volume. How does the Z580 stand up in this world of fast storage? 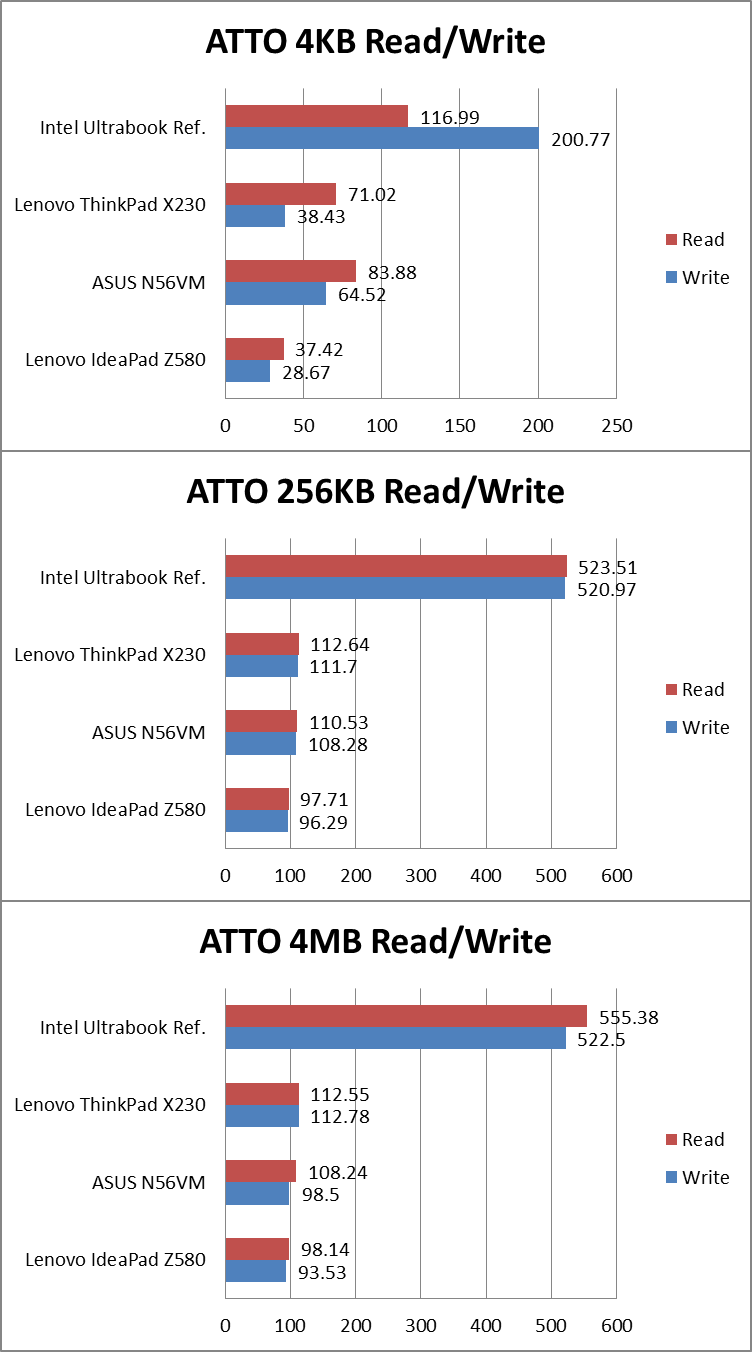 In ATTO the Z580 seems to manage when compared to the other hard drive options. It is slower than the other options but not so much so that you’ll have your data transfer experience entirely ruined. Of course, the SSD powered Intel Ivy Bridge ultrabook runs away from the crowd of mechanical drives.

Now let’s have a look at HD Tune for some more information. 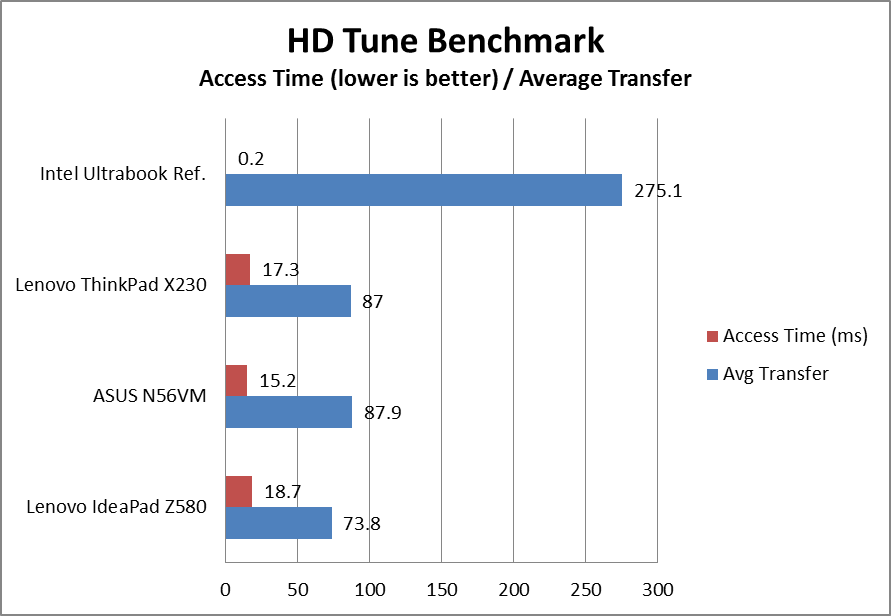 Here we see results that again put the Z580 at the bottom of the pack. Its access times are slightly higher than the other alternatives and its average transfer speed is about 15 Mbp/s lower. This is not a night-and-day difference, but overall the Z580 does offer second-worst results we’ve encountered since we started to use this benchmark. 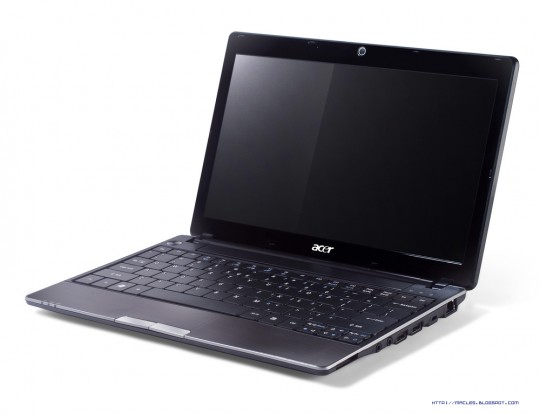 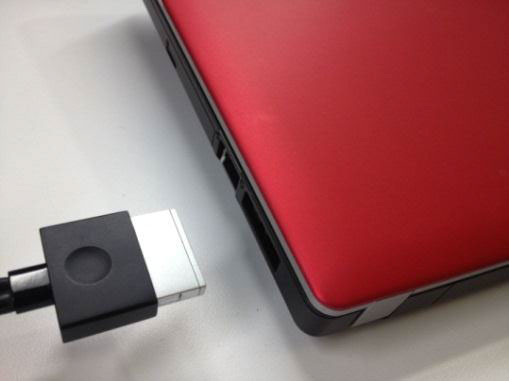