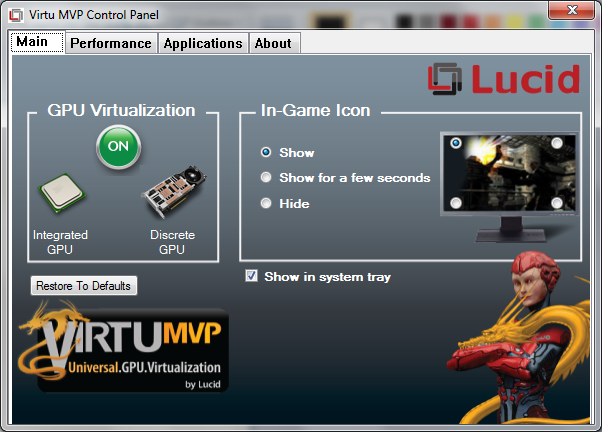 This feature is the main cause for my complaints about the VirtuMVP software. It took some time to understand what all the options related to HyperFormance mean and how they work. Eventually, after consulting with Lucid’s press contacts, I was able to straighten the software out. 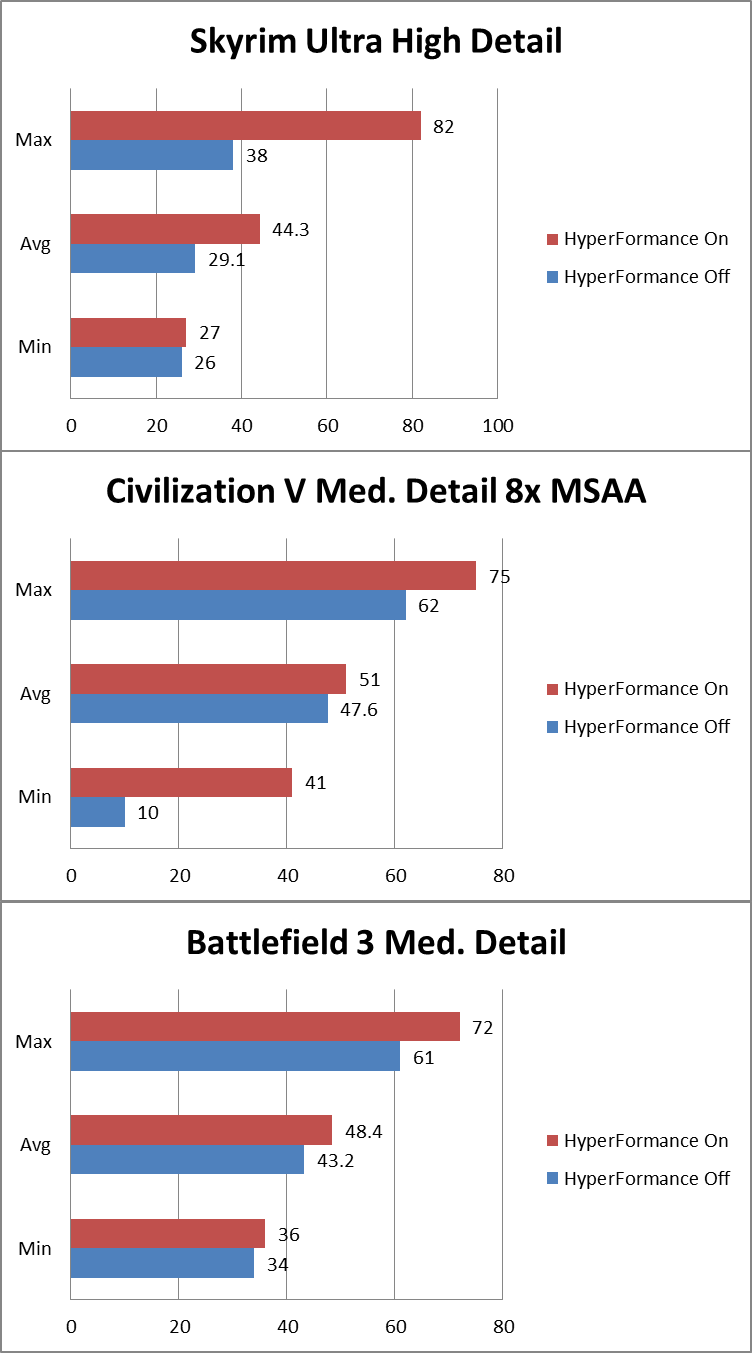 Skyrim’s result was astonishing. In that game turning on HyperFormance resulted in a large framerate increase and noticeable in-game improvement. Please note that I ran Skyrim with V-Sync manually turned off and that I was not using Virtual V-Sync in conjunction with HyperFormance. The improvement makes the difference between ultra-high detail feeling barely playable and ultra-high feeling smooth.

Civilization 5 improved by just a tad more than three frames per second on average. It did, however, experience a big increase in minimum framerate and a decent increase in maximum framerate. Did it feel like a better experience? I can’t say that it did.

Battlefield 3 saw its framerate jump by about 5 FPS, which can’t be ignored, but I can’t say that I noticed the improvement in-game. 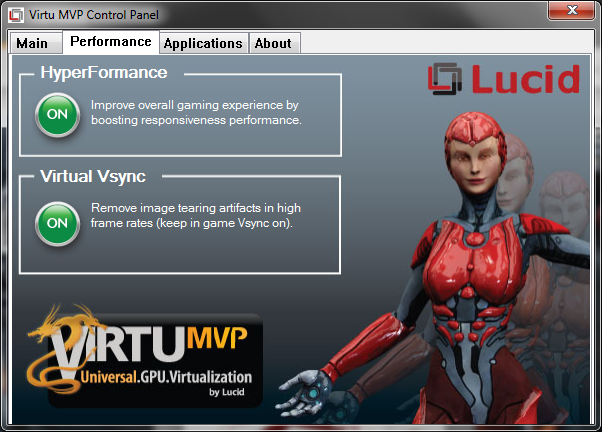 The interface of VirtuMVP gave me some trouble. I pressed the HyperFormance button, allegedly turning the feature on, and then tested. Yet the results did not change in two of the three games.

It turned out that I ALSO had to go into the application list and checkmark the “H” box beside those two games. Why weren’t they on to begin with? Why include a HyperFormance On/Off button, but not have that button automatically turn the feature on for all games? 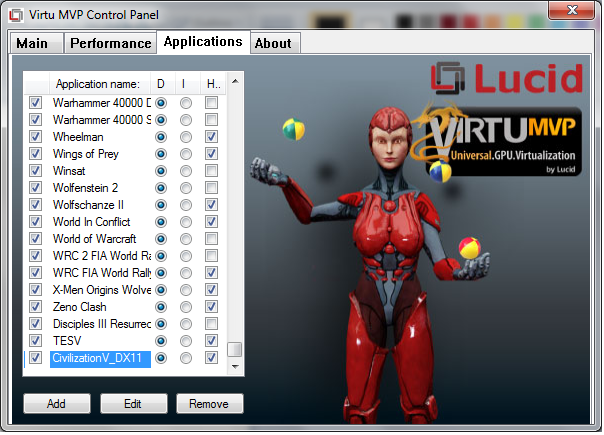 Worse, I had to manually TESV.exe even though the game was already listed by the software as validated. I discovered this only after approaching Lucid about why HyperFormance didn’t seem to impact the game. This lead me to wonder if the relatively low increase in framerate found in the other two games were the result of some bug – though, if it is, I haven’t been able to discover it or circumvent it.

The on/off button sometimes inexplicably fails to work, or turned a feature off and the right back on (as if I’d double clicked). Even the scroll bar in the application list seems to randomly stop working, forcing me to move my mouse away from it and then back to it. Adding applications doesn’t added them alphabetically but instead just places them at the bottom of the list, a problem could become a real annoyance if new games are added regularly.

The flip side of this is in-game performance. Its right to be skeptical about execution, but Lucid seems to have this part of the equation solved. I did notice a few strange flickers in Civilization 5, and the menu background in Skyrim twice turned yellow for no apparent reason, but both problems were momentary and did not interrupt gameplay. Battlefield 3 coughed up no bugs in my testing.

VirtuMVP works, and it has the potential to improve your gaming experience. Skyrim was obviously better with HyperFormance on and Virtual V-Sync is a nice extra that could be incredibly useful in certain situations.

I don’t think these improvements are enough to change the award we gave the Origin EON11-S, but they’re a start and provide Origin with something unique to offer gamers looking for a portable laptop.

My beef with VirtuMVP as it stands is simple – the software is bad. Lucid is a company that works on engineering solutions and it looks like they forgot to hire someone who cares about their consumer-facing interface. The look and feel of the software is on par with Windows freeware and some parts of it didn't work. If I were merely a consumer, rather than a guy with a press unit, I may have never known that I needed to manually add TESV.exe to make Skyrim work even though Skyrim was already in the list of validated apps.

Hopefully Lucid will get these flaws rectified in short order. They shouldn't be difficult to fix.  Lucid has already done the hard part. They’ve managed to squeeze a minor to major performance increase from a laptop’s existing hardware without introducing in-game glitches or instability. If they slap on a decent coat of paint they’ll have a compelling product – and the Origin EON11-S may end up being the only 11.6” gaming laptop worth buying.

As for other laptops with this feature – I don't have any information on at this time and Lucid specifically said it would be unwise to try the feature on any other laptop. If this debut can game some attention we will probably se VirtuMVP in some other products, but that's a big if.

Rock on to the Extreme