Let's get this out of the way up front here: the overclocking results on this page are but a single data point in a wide array of parts that will be available on the market.  While we might get GREAT results from a particular GPU, that doesn't mean you are going to get the same results when you buy yours or even that vendor A will overclock further than vendor B if you were to buy the same cards we used here.  That's just the nature of the game – we just play by its rules.

For our testing here, we used EVGA's Precision X software though you could have (as we verified) used MSI's Afterburner or Galaxy's Xtreme Tuner and access the same features, the same knobs, and the same results.

If you need a quick refresher on how the Kepler GPU overclocks you should read over this page of our GeForce GTX 680 review but here is the highlight:

The GPU clock offset is the other adjustable factor and it actually moves the entire performance curve up.  Think of it this way: when you set an offset of 50 MHz you are telling the GPU that its new base clock is 1056 MHz rather than 1006 MHz, and all the GPU Boosting is based off of that new base rate.  It is still possible to overclock your GPU too far and crash the system (as I did several times) but I think that is a good thing for consumers that want to make sure they are hitting the limits of their hardware. 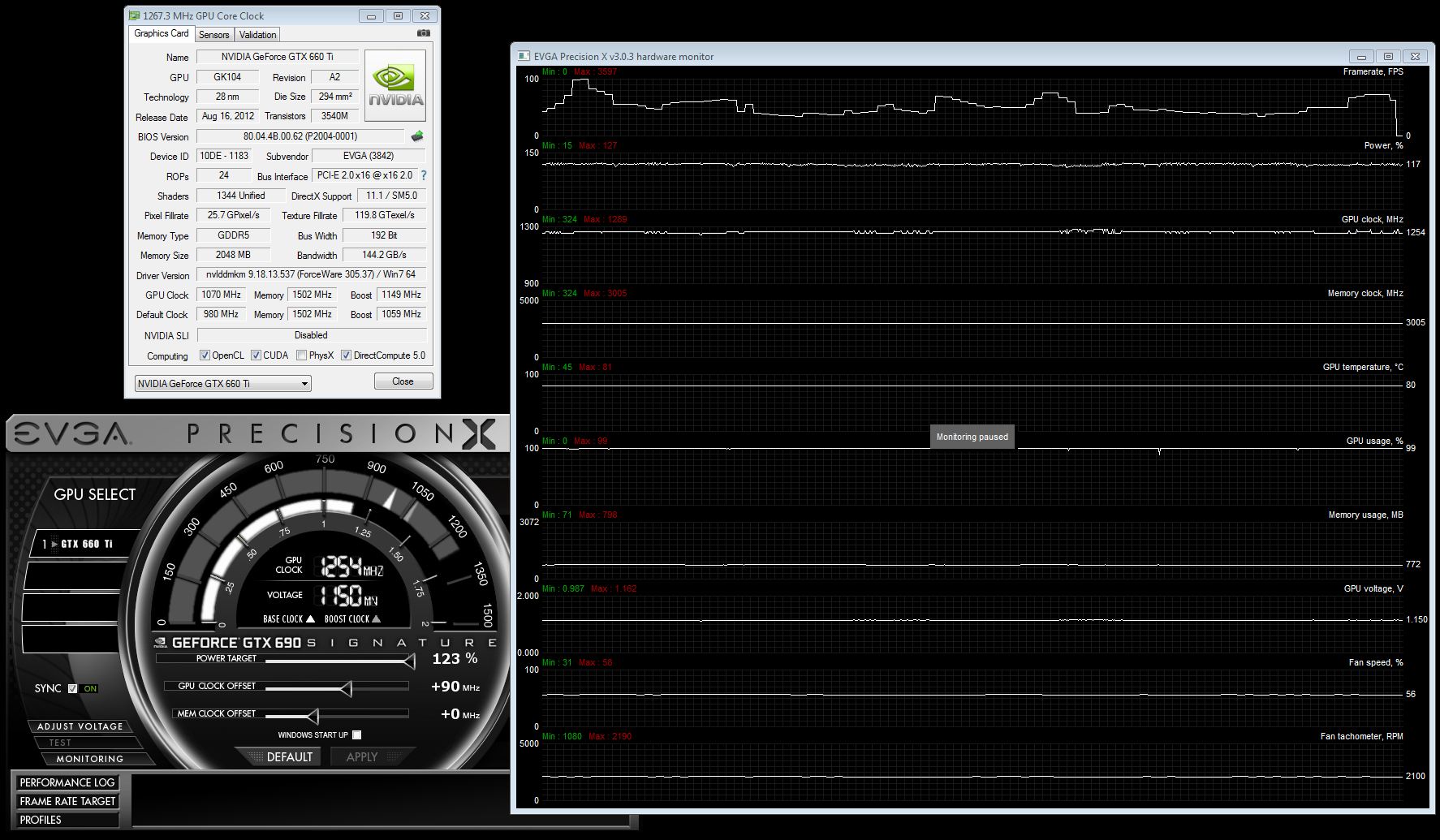 We connected a second monitor to keep the EVGA Precision X software and monitoring window open while testing and running games, and in the end we decided that our "stable" platform was going to be set by being able to complete a run of the very GPU intensive Unigine Heaven benchmark.  I found that this benchmark was much more "unstable" when it came to high offsets, and therefore gave us a worst-case scenario for long-term game playing sessions.

As you might remember, two of the more important numbers for GeForce GTX 660 Ti overclocking are the power % and the GPU clock rate.  The Power % indicates how much of the card's TDP is being utilized, and a number over 100% means we are pushing more than the 150 watt number that NVIDIA set as the TDP.  Both the Power % and the clock rate will vary in real time as the game state changes. 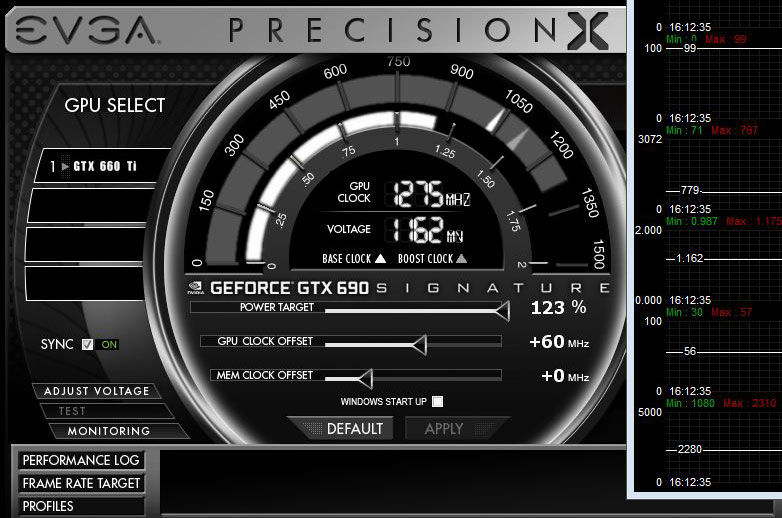 For our comparison testing, we set the Power Target on all four cards to their highest setting. It was 123-125% for the Galaxy, EVGA and Zotac cards but only 14% for the MSI card!  Try as we might, we couldn't get around that level in either EVGA's or MSI's own overclocking software.  This is more than likely holding up the MSI card's overclocking ability, and hopefully they'll have an answer for us soon. 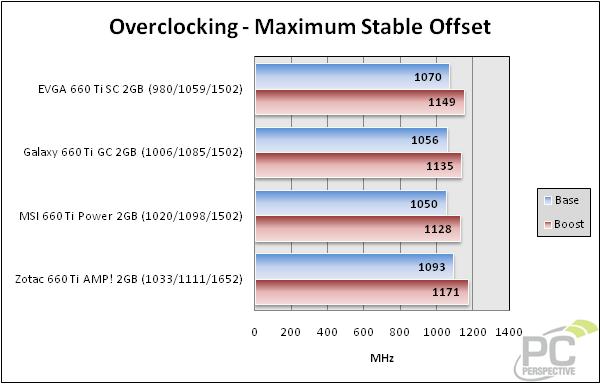 Here you can see our maximum stable GPU clock speed for each card. Keep in mind that, as I mentioned above, your mileage will likely vary.  Keep in mind as well that these are total clock speeds, not JUST the offset.  For example, while the Zotac card hit the highest base clock speed with a 1093 MHz rate, the EVGA had the highest offset with a 70 MHz (versus 60 MHz on the Zotac).

Also note that even though the Boost clocks are only going as high as 1171 MHz, those are the "normal" Boost clocks; as you can see in our image above we were able to hit over 1250 MHz clock speeds during our benchmarking and gaming tests.  In fact, the Zotac AMP! Edition was able to stay steady at 1275 MHz with a +60 MHz offset, the EVGA SC would run at 1266 MHz, Galaxy's GC card could run at 1189 MHz without issue, and MSI was able to clock to 1176 MHz. 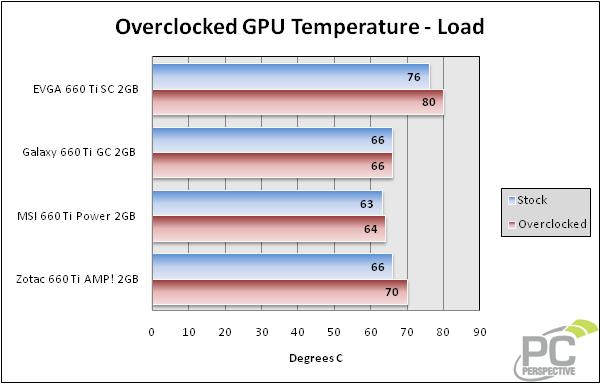 How did our temperatures change once we threw in some overclocking?  Actually, not by much. With the Zotac and EVGA solutions both increasing by 4C, the MSI cooler by a single degree, and the Galaxy cooler remained unchanged.  I should note here as well that sound levels for all four cards remained basically unchanged, moving only a 0.1-0.2 of a dB.

I did attempt to use the EVGA software to push the voltage up to the maximum of 1.175v, but the cards were already nearly hitting that voltage by just adjusting the power target and offset sliders so we didn't see any additional headroom in that.  When we get the MSI software working to increase the voltage beyond that, we may come back here for a second look.

What does it all mean for those of you looking to overclock?  Honestly, I think all of these cards are going to do pretty well but the Zotac, MSI and Galaxy cards really stand out for having a much better cooling solution than the EVGA SC model.  The Zotac AMP! GeForce GTX 660 Ti was able to hit the highest clock speed in my testing, but even the MSI card with its 114% power target bug was within ~40 MHz.