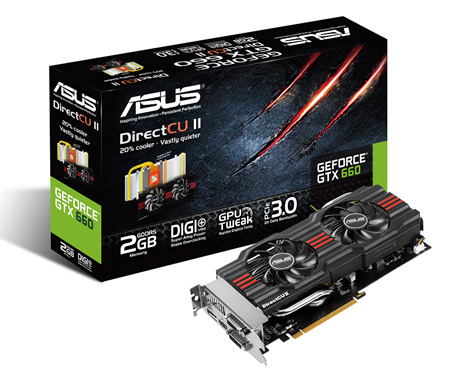 As those of you who have already read the post below this one know, ASUS decided to create a DirectCU II model for their GTX 660, with the famous heatpipe bearing heatsink.  They have overclocked the GPU already and the card comes with tools to allow you to push it even further if you take the time to get to know your card and what it can manage.  Check the full press release below.

ASUS once again includes the award winning GPU Tweak tuning suite in the box. Overclocking-inclined enthusiasts or gamers can boost clock speeds, set power targets, and configure fan operating parameters and policies; all this and more is accessible in the user-friendly interface. GPU Tweak offers built-in safe guards to ensure all modifications are safe, maintaining optimal stability and card reliability.