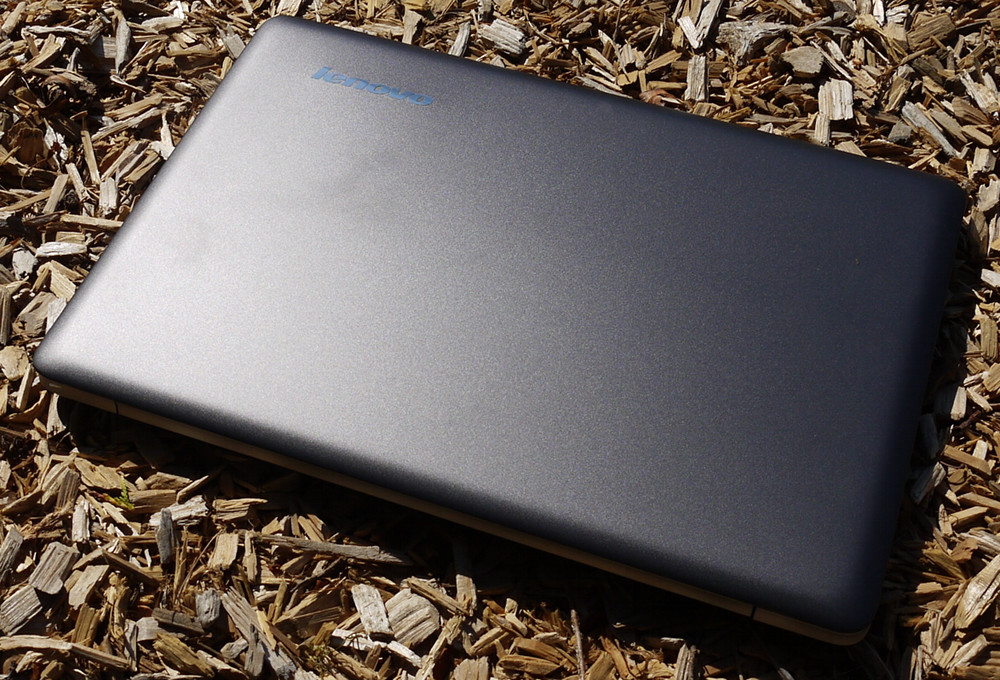 We start are gaming benchmarks with the 3DMark 11 synthetic benchmark, the industry standard for gauging GPU performance. Let’s see what it has to say about the U410 and its NVIDIA GT 610M discrete GPU. 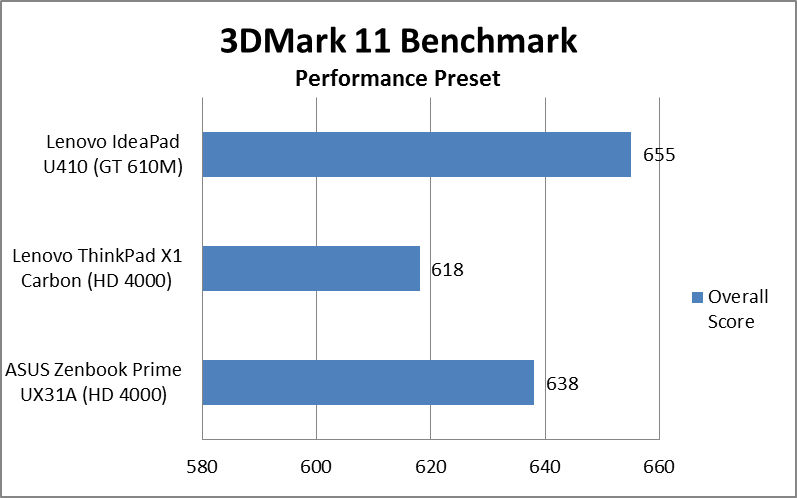 This benchmark doesn’t show much of a difference between the Intel HD 4000 and the NVIDIA GT 610M. It’s a tad bit faster, sure, but the difference is so small that it’s not meaningful. Hell, the gap between the two Intel HD 4000 is larger. Does this mean the discrete GPU is a bit pointless in real-world gaming? Let’s find out.

Dawn of War 2: Retribution is a game that places a lot of demand on a laptop’s processor as well as some demand on the GPU. Despite its age, it can be still be difficult for modern laptop to handle. Let’s see how our competitors stack up. 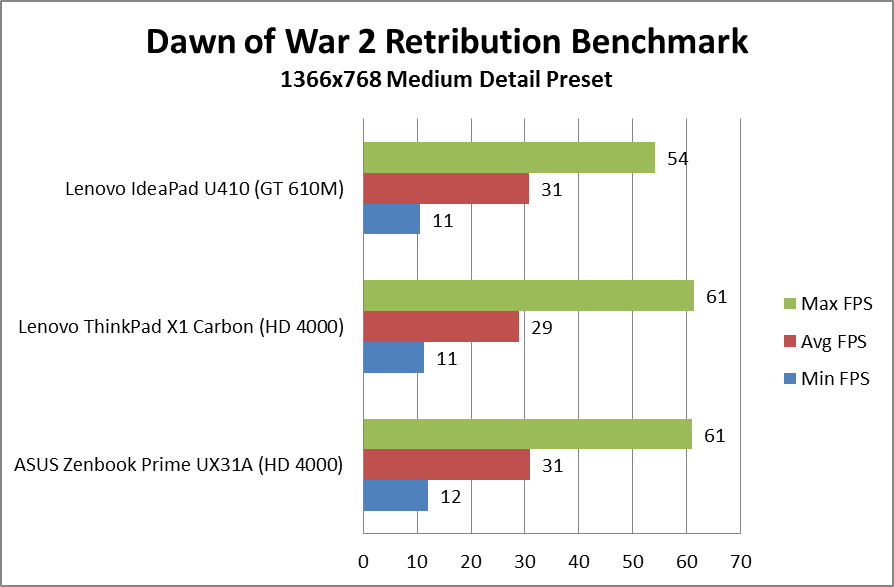 The performance here is remarkably similar. All offer about the same average and minimum framerate. The U410 and its NVIDIA GPU is actually behind in maximum framerates. The reason for the similarity in performance may be the graphics processor, but the game might also be CPU bound. Let’s move on.

Sid Meier’s Civilization V is among the most beautiful strategy games on the market. Its beauty comes at the price of performance – this game is demanding at medium to high detail. It becomes more demanding as the game progresses and more units, cities and improvements are displayed. Let’s see how our competitors handle the game. 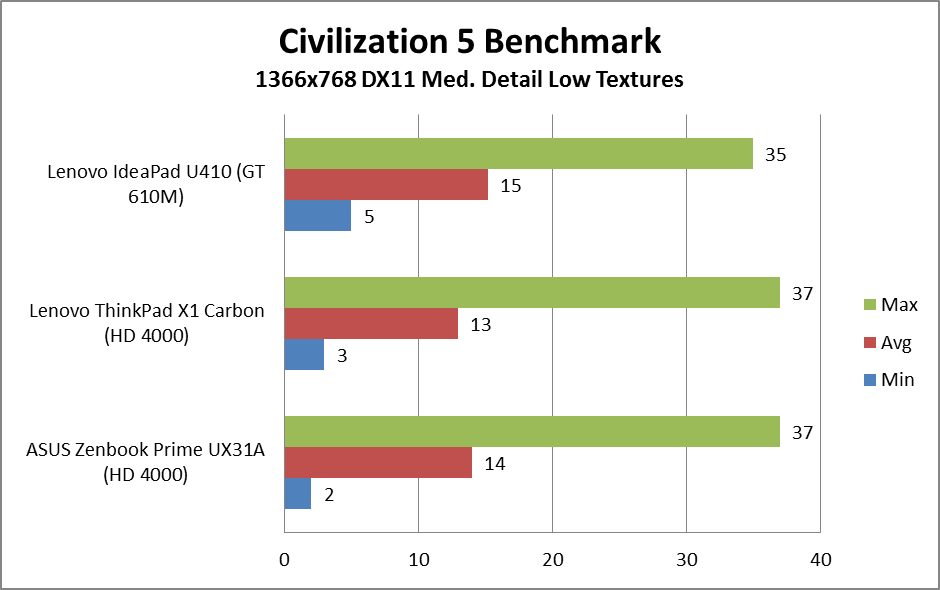 Once again there’s not a lot of variance between the laptops. All of them have about the same performance and all of them struggle to play the game smoothly. The advantage of the GT 610M has still yet to manifest itself.

Blizzard’s latest installment in the Diablo franchise is a beautiful game. Polygon counts are anything but high, yet the art direction and use of effects creates an immersive game world. This is the least demanding game in our benchmark suite overall, but it can still be troublesome when the detail settings are cranked up to high. 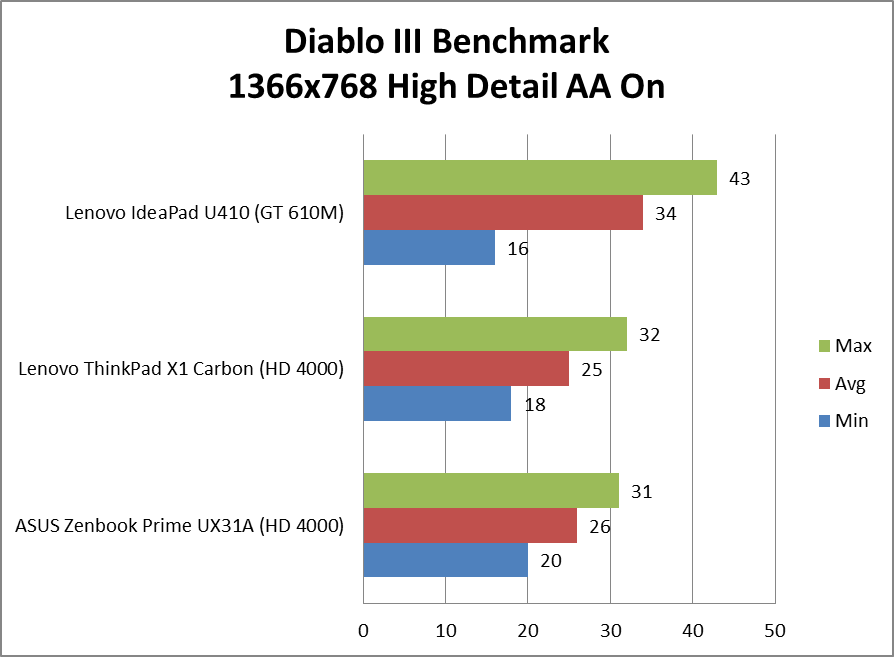 In this game we see the GT 610M finally justify its existence. The U410’s average of 34 FPS is a meaningful improvement over the 25-26 FPS achieved by the Intel HD 4000 systems. The maximum framerate was also much higher.  Personally, I still think you’d want to run the game at medium. Diablo 3 requires split-second reactions and there were some framerate dips during gameplay. But the U410 does provide a playable experience at high detail.

Skyrim can be a very difficult game for a low-end laptop system to run. It requires a decent CPU and a mid-range GPU at the least, and even then it may be difficult to play at anything beyond Medium. In our tests we’ve generally found that low-end discrete GPUs struggle. Is the GT 610M any different? 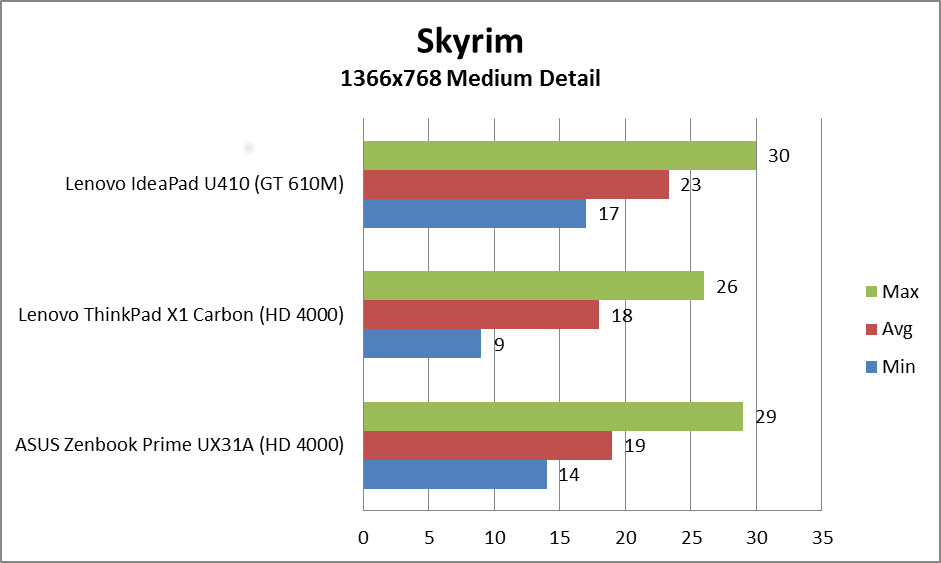 Nope, though it does once again show that it has a reason to exist relative to Intel HD 4000. Yes, I know – a difference of 4 or 5 FPS doesn’t seem like a lot. But it’s actually meaningful when you’re dealing with extremely low framerates. Playing Skyrim at medium is noticeably more enjoyable on the U410, though I still wouldn’t recommend it.

Last, but certainly not least, we test Battlefield 3. This relatively new shooter remains one of the most graphically demanding and visually stunning titles on the PC. It’s a game that usually does not run well on modest laptop hardware, as well. Let’s see if the GT 610M can address that. 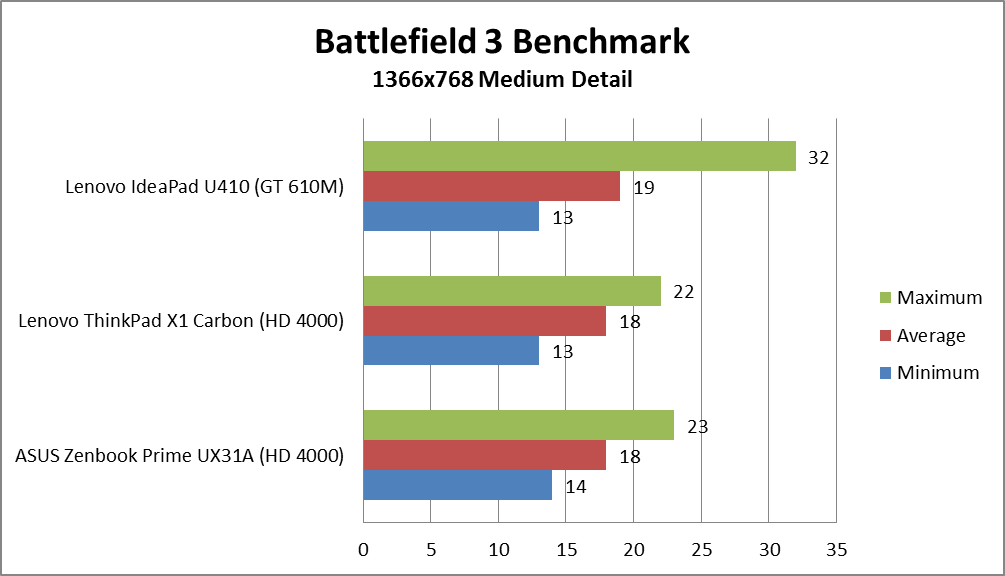 Once again the GT 610M fails to impress. It provides a much higher maximum framerate than the Intel HD 4000 models, but the average is about the same. Real-world gameplay is quite choppy, so the game is not playable at medium detail.

Asus has a Leather Fetish 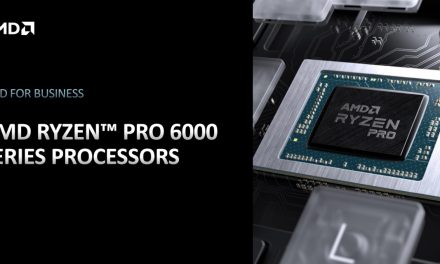