Lenovo brings its keyboard magic to a high-end ultrabook.

Lenovo is one of several companies–including Acer and HP–that have embraced the ultrabook concept with both arms. Lenovo has not simply released a few high-end models similar to what as ASUS has done. Rather, it has released a fleet of products which include the U300/U310, the U410 and the U300S. And now there is a new high end product in the lineup called the ThinkPad X1 Carbon.

There several traits that mark the ThinkPad X1 Carbon as unique. This is the first ThinkPad to bear the ultrabook title, for example. Further, the 430u (which was initially announced all the way back in January at CES 2012) is not yet available. The X1 Carbon is also one of only a few laptops to use carbon fiber in its frame. And this laptop is the only ultrabook on the market with a trackpointer. As I’ve mentioned before, unique design traits are kind of a big deal, and a peek inside the X1 reminds us why. 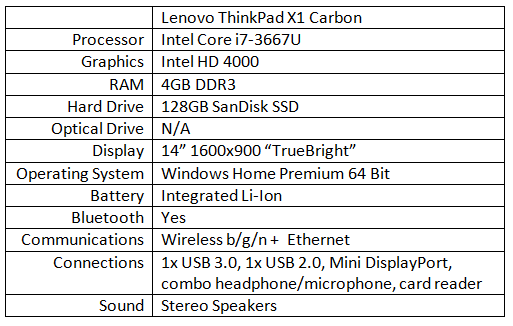 There’s nothing in that spec sheet that stands out. Yes, the Core i7 low-voltage processor will prove faster than the Core i5s in most competitors, but you can usually option to an i7 if that’s what you desire. The solid state drive is completely standard for an ultrabook above $1000, and four gigabytes of RAM can be hand in virtually any laptop on store shelves today–even those selling for $500.

This means Lenovo needs to bring something special if it wants to justify a premium price. You can buy this laptop right now for about $1250, but grabbing the upgrades found in our review unit raises the price to about $1500. That’s in line with the HP Envy 14 Spectre, an editor’s choice winner, and the ASUS Zenbook Prime UX31A, which would have won an editor’s choice if ASUS had a handle on its quality control. Let’s see if the Carbon can deal with these top-tier competitors. 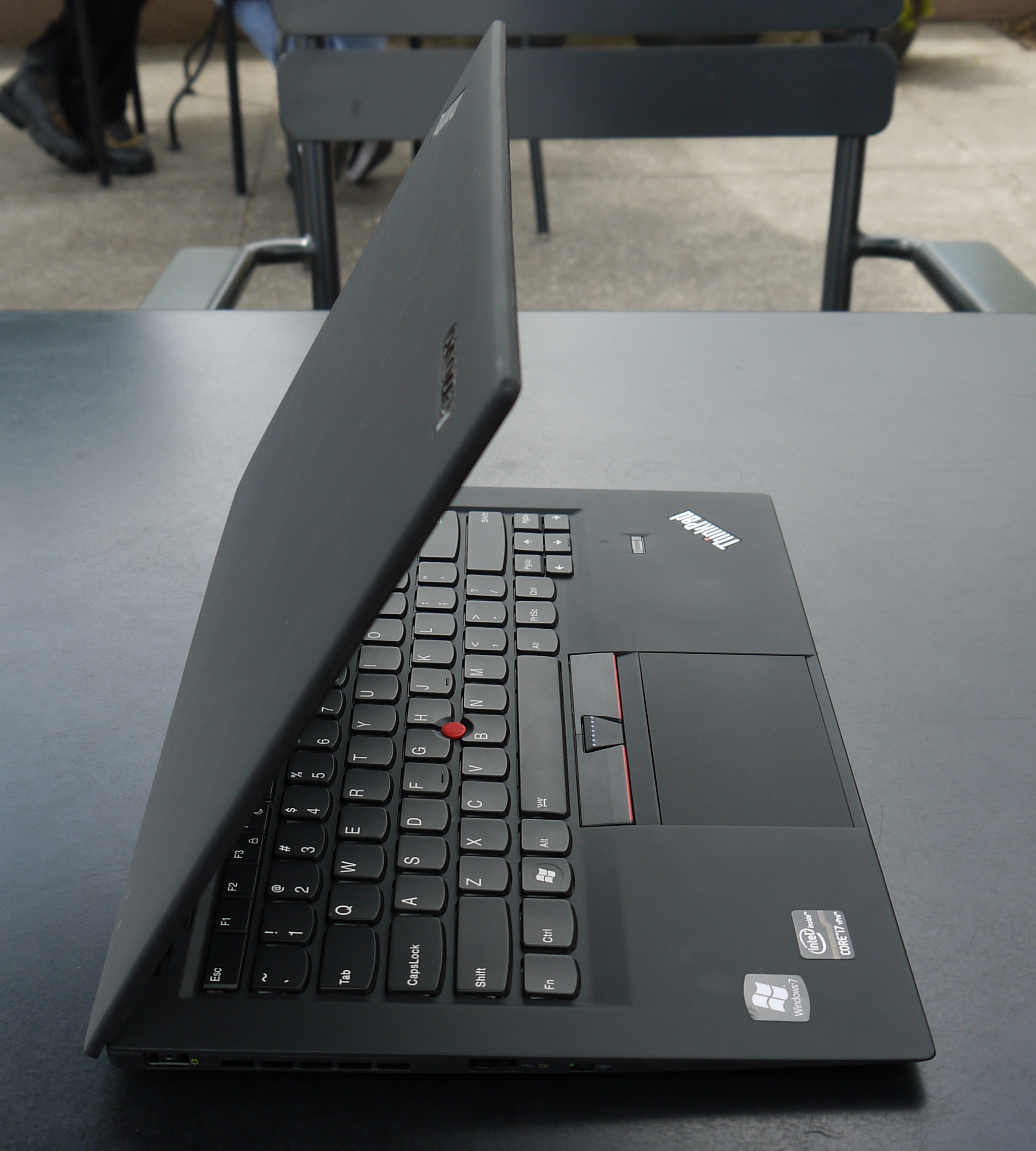 Lenovo has not compromised its classic ThinkPad design in its pursuit of the ultrabook form factor. Everything–right down to the texture of the lid–feels exactly as fans of the brand would expect. Every inch of the laptop’s surface is covered in a matte black, semi-soft material. Lenovo has long used this coat on the lid of ThinkPad laptops because it is not easily marred by scratches, and provides plenty of grip. This is the first time I’ve seen it used on every nook and cranny, however.

Loyalists might be disturbed by the lack of metal hinges, but I otherwise can't find any issue with build quality. Unlike thin metal laptops, which will bend if pressured, the Carbon’s lower chassis resists such pressure. The thin lid does flex a bit, but only to a certain point, at which is becomes firm. Pressing hard along the keyboard reveals minimal flex and the hinges wound tight enough to keep the display in position as the laptop is moved around.

As for panel gaps, uh, what gaps? There are only a few, and only one is easy to notice.
Connectivity is the only area where the Carbon breaks from ThinkPad tradition. It has room for just two USB ports, of which only one is 3.0. Video output is handled by Mini-DisplayPort, and audio is facilitated by a combo headphone/microphone jack. And there is a card reader and…that’s it. This thin port selection may keep some potential buyers at bay.