Maingear Launches New Alpha 24 Super Stock All In One PC 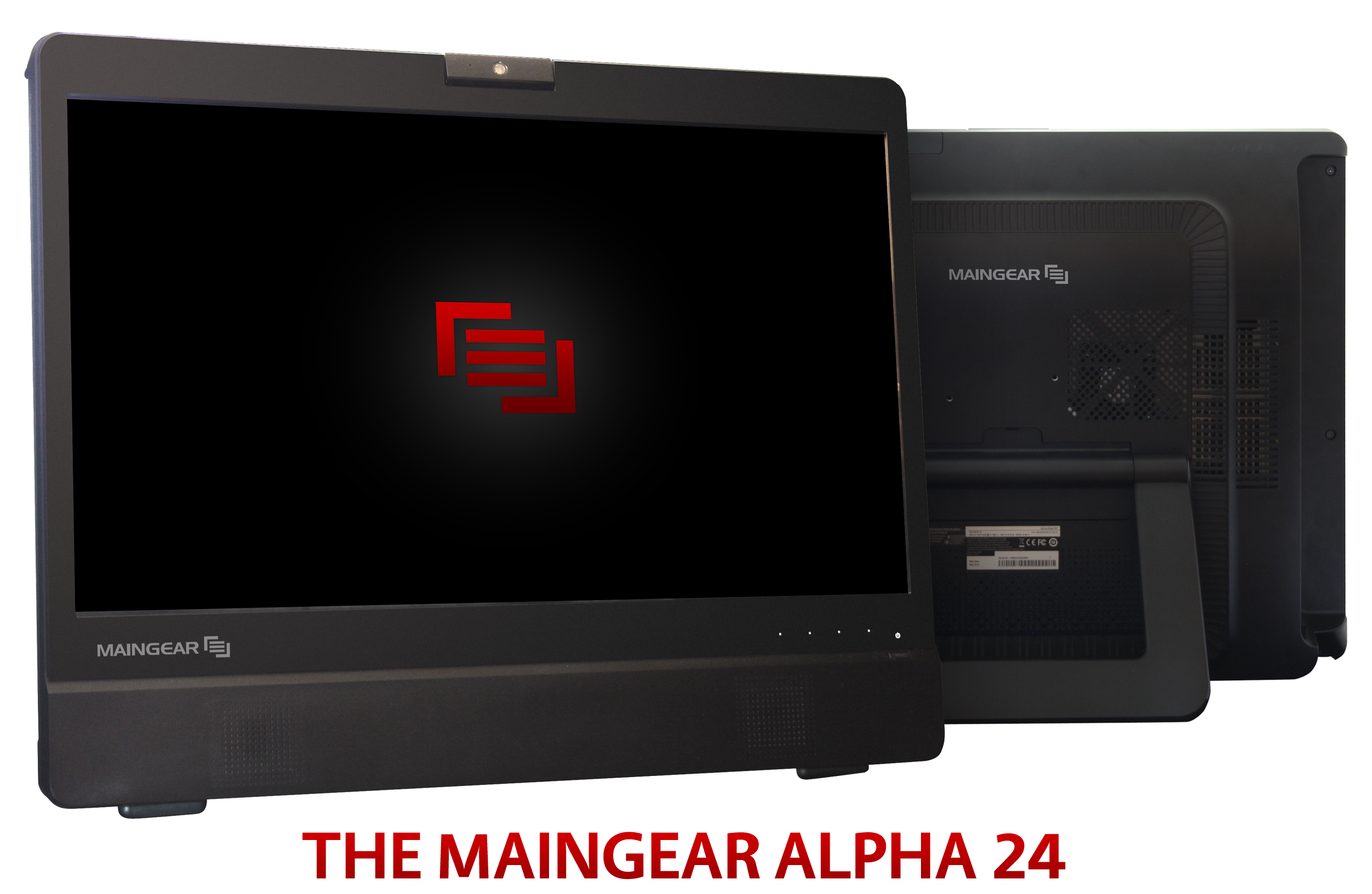 Custom PC manufacturer Maingear took the wraps off of its latest all in one computer today, and it features some impressive specifications for an AiO system. As the release of Microsoft’s upcoming Windows 8 operating system approaches, Maingear is gearing up support by introducing a system with desktop specifications and a large 24” touchscreen display with the new Alpha 24 Super Stock.

On the outside, the matte black Alpha 24 all in one has a prominent 24” glossy touchscreen display running at 1920×1080 resolution. Above the screen is a webcam. There are ports along the left side of the bezel and ventilation slits for the HSF on the back.

What makes the Alpha 24 interesting is all the hardware that the company has managed to pack inside the monitor-sized form factor. Internally, you will find a mini-ITX motherboard with Intel Core i7 3770K Ivy Bridge processor, and up to 16GB of DDR3 laptop RAM, 256GB Crucial M4 mSATA SSD, 3TB mechanical hard drive, and a NVIDIA GeForce GTX 680 graphics card (GTX 650 and GTX 670 GPUs are also options). The Alpha 24 also features 802.11n Wi-Fi and Bluetooth support, with an optional Bigfoot Killer Wireless add-on card. Not bad at all for an all in one system!

Maingear is further pushing the multimedia and home theater PC aspects of the Alpha 24. An internal DVD or Blu-ray optical drive can be added, for example. Also interesting is the inclusion of an optional CableCARD tuner that will allow the Alpha 24 to tune into encrypted cable TV stations and act as a DVR using software like Windows Media Center. Unforunately, details on the specific tuner they are offering were not given in the press release. The Alpha 24 can also act as a monitor for external video sources connected over HDMI, such as a game console or another computer. 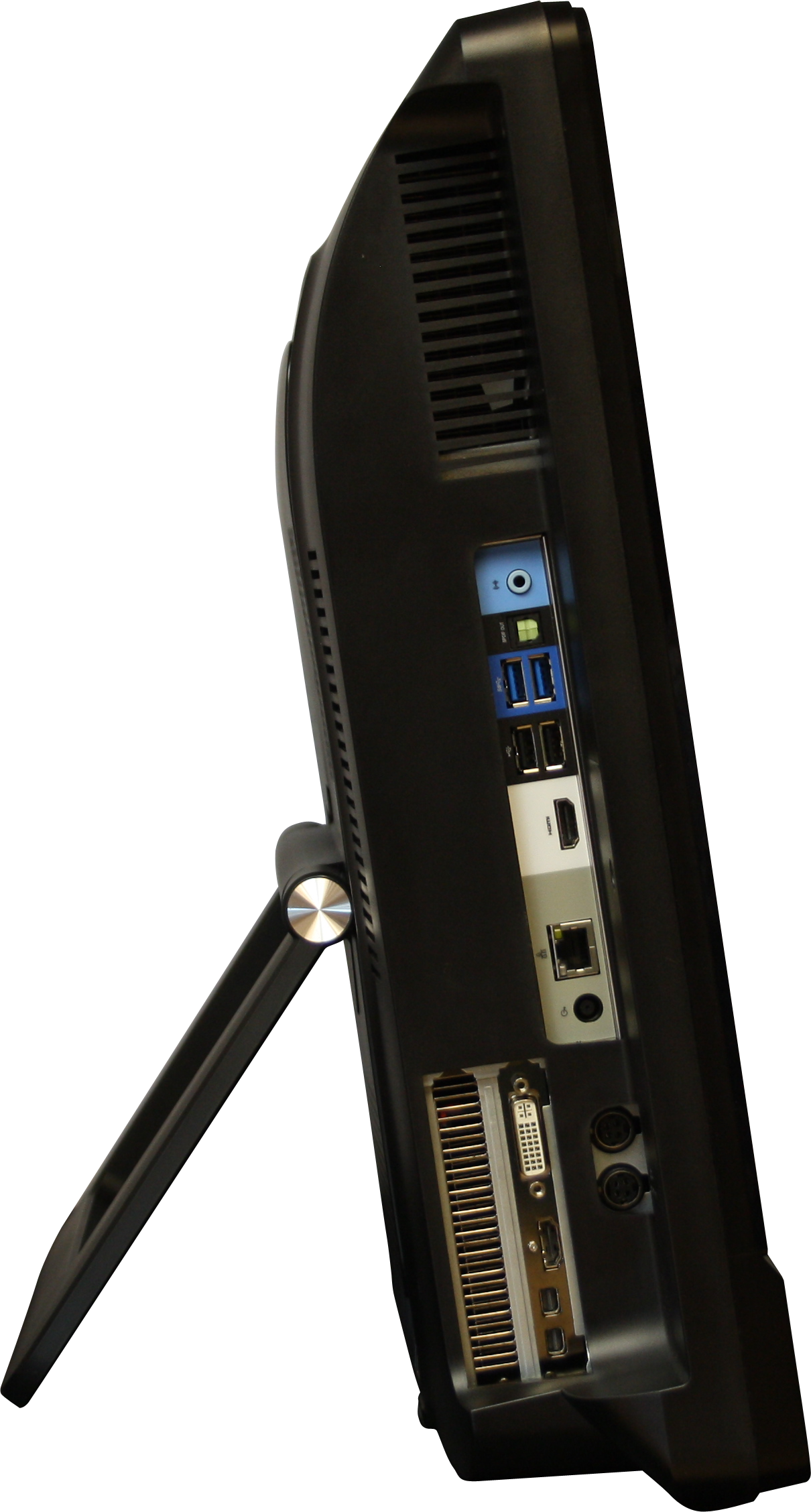 Maingear did not skimp on the I/O either for the claimed “no compromises” Alpha 24. Internal expansion slots include two mini PCI-E and one PCI-E x16 slot (for the GPU). External connectivity options include three USB 2.0 ports, a SD card reader, mic in/audio out jacks, and space for a single slim optical disc drive along the right edge of the display. Ports along the left edge of the display include the graphics card's video outputs – 1x DVI, 1x HDMI, 2x DisplayPort – two S-Video connectors, power jack, Gigabit LAN, HDMI output, two USB 2.0, two USB 3.0, optical audio output, and analog audio jack. The back of the Alpha 24 hosts a VGA and HDMI input along with antenna connectors.

Also, the internals are user serviceable and things like the GPU can easily be upgraded, according to the company – allowing for future upgrading to keep the system relevant. Maingear CEO Wallace Santos stated the following in the company's press release.

“In this day and age, there shouldn’t be a reason anyone would need to compromise for an all-in-one performance PC. Other all-in-one PC solutions pale in comparison to the ALPHA 24 and can be summed up with just a few words: 1080p gaming set to Ultra, maxed anti-aliasing and tessellation.”

Currently, the Alpha 24 has an MSRP starting at $1,349 for the base model. It will ship with Windows 7 x64, however it should be available pre-loaded with Windows 8 later next month following the Windows 8 release.

All in all, the Maingear Alpha 24 looks like a decent computer for the price, though you are paying a bit of a premium for the all in one form factor versus going with a traditional desktop – and building a PC yourself by following the PC Perspective Hardware Leaderboard. So long as the reviews come back stating that build quality is good, it is definitely an interesting machine if you are limited to OEM options and don’t want a tower sitting under your desk – the CableCARD tuner option is also a nice touch.

You can find more photos of the Alpha 24 over at the Maingear website.

What do you think about this system, enough future upgrade-ability to sway you away from a traditional tower PC?