Earlier this month AMD announced that it was upgrading the Radeon HD 7950 graphics card to run at higher clockspeeds and with boost capability. The PowerTune with Boost technology uses digital temperature estimation and dynamic voltage control to increase the GPU core clockspeed above the base clockspeed in most applications.

Using a new BIOS, manufacturers would be able to refresh their existing lineups to enable PowerTune with Boost and higher clockspeeds. Original graphics cards along with the refreshed boost-capable GPUs will be sold in parallel (the original 7950s are not being phased out completely yet). And in a somewhat similar situation to unlockable 6950 reference cards, users could attempt to flash the new boost-capable BIOS to their original HD 7950s – though it is not guaranteed to work (and that's where the OEM certification becomes useful). 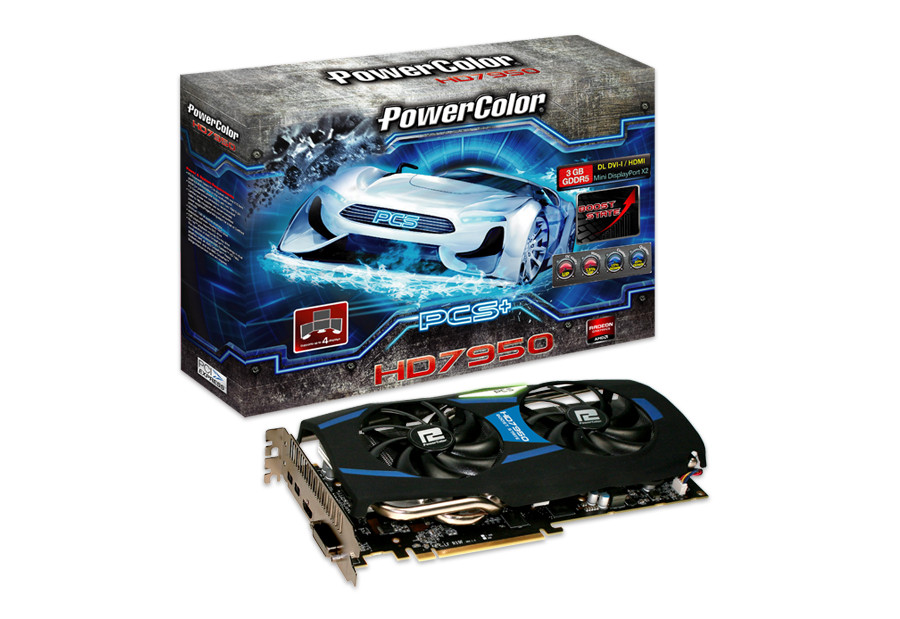 AMD Add In Board (AIB) partner PowerColor (who recently launched the Devil 13 7990) has released its second Radeon HD 7950 graphics card with boost in the form of its custom – and factory overclocked – PCS+ graphics card. The original PCS+ and new "Boost State" graphics card will be sold simultaneously, and (fortunately) you will be able to tell them apart by the red Boost State sticker on the box and the new "Boost State" labeling tacked onto the product name at online retailers. The new PowerColor PCS+ HD7950 3GB GDDR5 Boost State graphics card steps up the factory overclock to 900 MHz base while keeping the same PCS+ cooler and PCB design.  The triple-slot design incorporates a cooler with dual 92mm fans and three 8mm heatpipes connected to an aluminum fin array. The PCB hosts the 7950 GPU, 3GB of GDDR5 RAM clocked at 1250 MHz, 6+2+1 power phase, digital PWM circuitry, and ferrite core chokes. A dual BIOS switch and two 6-pin PCI-E power connectors are also present. Video outputs include two mini-DisplayPorts, one HDMI, and one DVI. 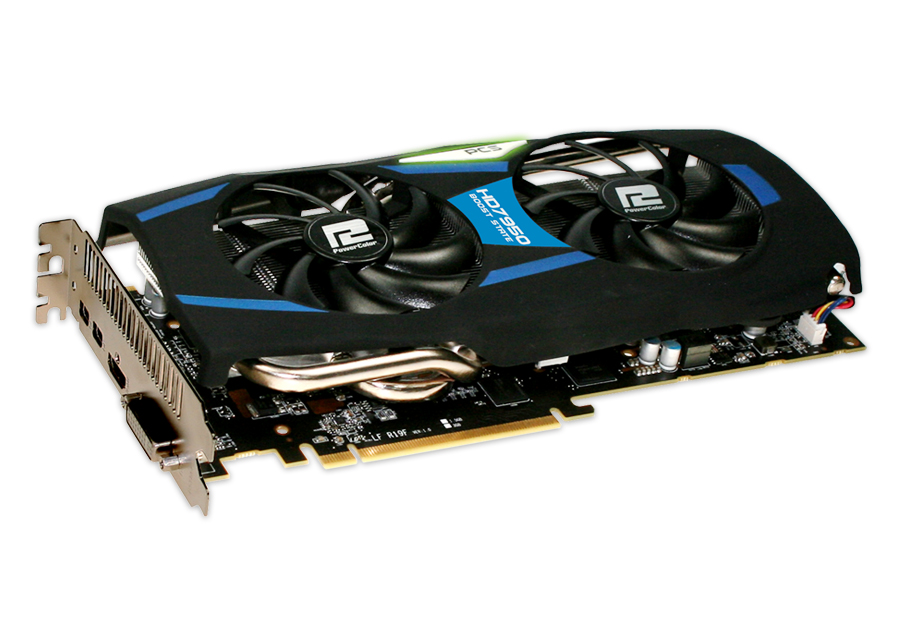 Those specifications remain unchanged, and the new graphics card is essentially a PCS+ HD7950 that has been certified to run with the updated BIOS at the new GPU clockspeeds (and with boost). It may be possible to flash an original PCS+ 7950 with the updated BIOS and get the same performance as the new card but there are, obviously, no guarantees. However, because of the dual BIOS switch the risk of permanent damage is minimal (though the warranty would likely be void).

There is no word on pricing or when exactly you will be able to buy the new "Boost State" cards, but they should start showing up at retailers soon. Expect pricing to be a bit above the original PCS+ GPU's (approx.) $330 retail price.