On a not very technically reliable webcast today, AMD has announced that it will produce 64-bit processors based on the ARM architecture and combine them with the "Freedom Fabric" they acquired with the purchase of SeaMicro.

In a move that is incredibly telling about the times we are in, but not really a surprise to those of us that follow the processor markets closely, AMD and ARM announced a partnership beyond previously discussed in public.  AMD will start production of ARM-based processors in 2014 and will be among the first to include 64-bit technology.

The target for these processors will be the server market and AMD hopes to be at the forefront the often discussed ARM-in-the-server-world migration.  While that server opportunity size is debatable, with partners on stage like Facebook and RedHat, there is little doubt that it will have an affect on enterprise computing in the next 24 months.  AMD is hoping that its experience with the move to 64-bit technology in the x86 migration will aid them in development and migration in the ARM architecture world; one that is currently still limited to 32-bit.

UPDATE: As being reported by Anand Shimpi this is in fact NOT an architecture license but is instead a processor license.  What does that mean?  AMD is not going to develop its own core (as Apple and NVIDIA do) but instead will fully integrate an upcoming 64-bit ARM core in new AMD products. 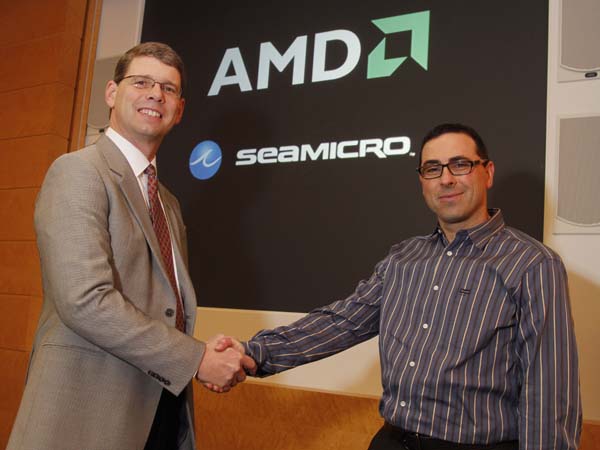 SeaMicro's Freedom Fabric technology is another major angle that AMD has over other players in this field.  The fabric technology is meant to facilitate communication between multiple processors on a specialized bus, removing bottlenecks on the platform and network.  Dr. Lisa Su, SVP of Global Business at AMD, stated that simply connecting hundreds or thousands of ARM-based processors to each other isn't enough and moves the problem of computing management from the CPUs to the network itself.  Using Freedom Fabric, the AMD-based ARM processors would be able to much more efficiently communicate and thus maintain the promised power benefits of ARM servers.

AMD did state that they will continue to develop x86 processors going forward but you have to wonder about its dedication to that goal.  Working with ARM is a quick and easy way to get AMD into a growing market in the server world that Intel currently has no solutions for so it seems possible that this is simply a stop-gap until AMD can develop an x86-based solution.  It is hard to say for sure but for an organization in AMD's financial position, having options in multiple segments is certainly a good idea. 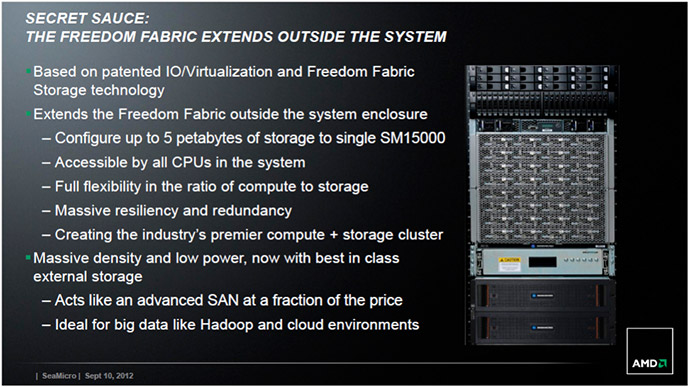 What you won't see yet is AMD's graphics technology in the ARM-based processors announced today.  This isn't an "ARM APU" but instead is a combination of SeaMicro and ARM for a very specific server workload.

We'll have more on this announcement if anything else interesting is divulged, but you can find the entire press release from AMD after the break!

AMD’s new design initiative addresses the growing demand to deliver better performance-per-watt for dense cloud computing solutions. Just as AMD introduced the industry’s first mainstream 64-bit x86 server solution with the AMD Opteron processor in 2003, AMD will be the only processor provider bridging the x86 and 64-bit ARM ecosystems to enable new levels of flexibility and drive optimal performance and power-efficiency for a range of enterprise workloads.

“AMD led the data center transition to mainstream 64-bit computing with AMD64, and with our ambidextrous strategy we will again lead the next major industry inflection point by driving the widespread adoption of energy-efficient 64-bit server processors based on both the x86 and ARM architectures,” said Rory Read, president and chief executive officer, AMD. “Through our collaboration with ARM, we are building on AMD’s rich IP portfolio, including our deep 64-bit processor knowledge and industry-leading AMD SeaMicro Freedom supercompute fabric, to offer the most flexible and complete processing solutions for the modern data center.”

“The industry needs to continuously innovate across markets to meet customers’ ever-increasing demands, and ARM and our partners are enabling increasingly energy-efficient computing solutions to address these needs,” said Warren East, chief executive officer, ARM. “By collaborating with ARM, AMD is able to leverage its extraordinary portfolio of IP, including its AMD Freedom supercompute fabric, with ARM 64-bit processor cores to build solutions that deliver on this demand and transform the industry.”

The explosion of the data center has brought with it an opportunity to optimize compute with vastly different solutions. AMD is providing a compute ecosystem filled with choice, offering solutions based on AMD Opteron x86 CPUs, new server-class Accelerated Processing Units (APUs) that leverage Heterogeneous Systems Architecture (HSA), and new 64-bit ARM-based solutions.

This strategic partnership with ARM represents the next phase of AMD’s strategy to drive ambidextrous solutions in emerging mega data center solutions. In March, AMD announced the acquisition of SeaMicro, the leader in high-density, energy-efficient servers. With today’s announcement, AMD will integrate the AMD SeaMicro Freedom fabric across its leadership AMD Opteron-, ARM- and x86-based processors that will enable hundreds, or even thousands of processor clusters to be linked together to provide the most energy-efficient solutions.

“Over the past decade the computer industry has coalesced around two high-volume processor architectures – x86 for personal computers and servers, and ARM for mobile devices,” observed Nathan Brookwood, research fellow at Insight 64. “Over the next decade, the purveyors of these established architectures will each seek to extend their presence into market segments dominated by the other. The path on which AMD has now embarked will allow it to offer products based on both x86 and ARM architectures, a capability no other semiconductor manufacturer can likely match.”

At an event hosted by AMD today in San Francisco, representatives from Amazon, Dell, Facebook and Red Hat participated in a panel discussion on opportunities created by ARM server solutions from AMD. A replay of the event can be found here as of 5 p.m. PDT, Oct. 29.