When I first heard about Vishera last year, I was excited for AMD, especially in light of how disappointing Bulldozer/Zambezi turned out to be.  Piledriver was supposed to cure all ills with Bulldozer, and allow the architecture to fly free.  Well, perhaps that is overstating it too much.  We did expect an improvement, and we were hoping they could at least be competitive with what Intel has to offer at those price points. 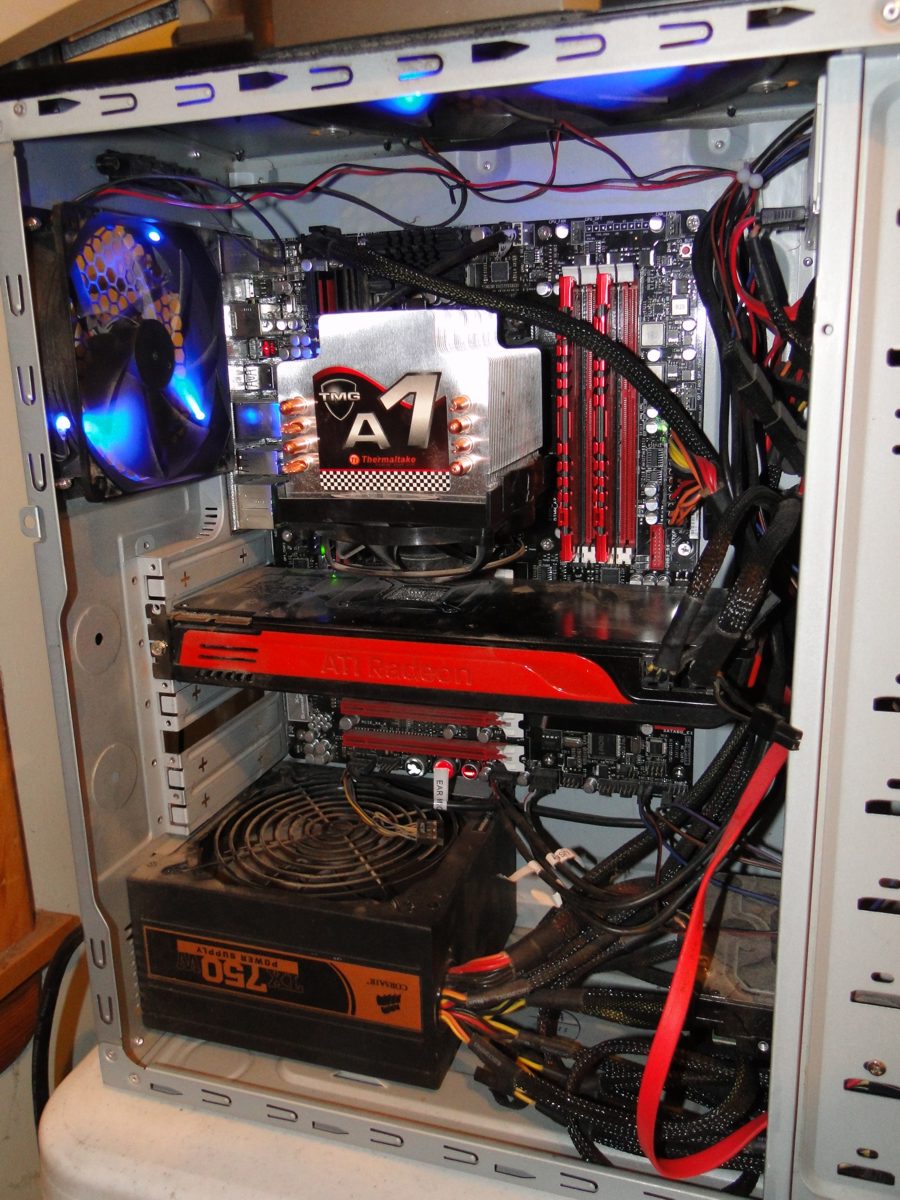 More and more information leaked out and we started to figure out that Vishera would be an improvement, but it would not come close to matching Intel in overall performance.  It certainly would not be matching Intel in power consumption either!  Intel has that nice process lead, and 22 nm sprinkled with FinFETs makes GLOBALFOUNDRIES’ 32 nm SOI product look ancient.  Perhaps I could inject more hyperbole here?

So what do we actually get with this release?  Well, it is a bittersweet release for AMD.  The pricing on these parts is not only competitive, it undercuts Intel by a significant amount across the board.  The 8350 is very competitive with the 3570K, and it can be had for $30 less.  The 6300 will walk all over the Intel products that exist at the $132 price point, and in fact is more competitive in terms of performance with the $185 Intel products.  Again, we get a nice $50 discount for essentially the same performance.  In these cases though, expect the AMD CPU to consume more power.  Would it be enough to make one nervous about energy bills?  Not really.

Vishera does have a nice increase in per clock performance over Zambezi.  It has allowed them to lower the clockspeed on the 6300 and 4300 parts, all the while maintaining a small performance lead over the higher clocked previous versions.  The 6300 does edge out the 6200 in most real world applications, and it does so at a 95 watt TDP vs. the 6200’s 125 watt. 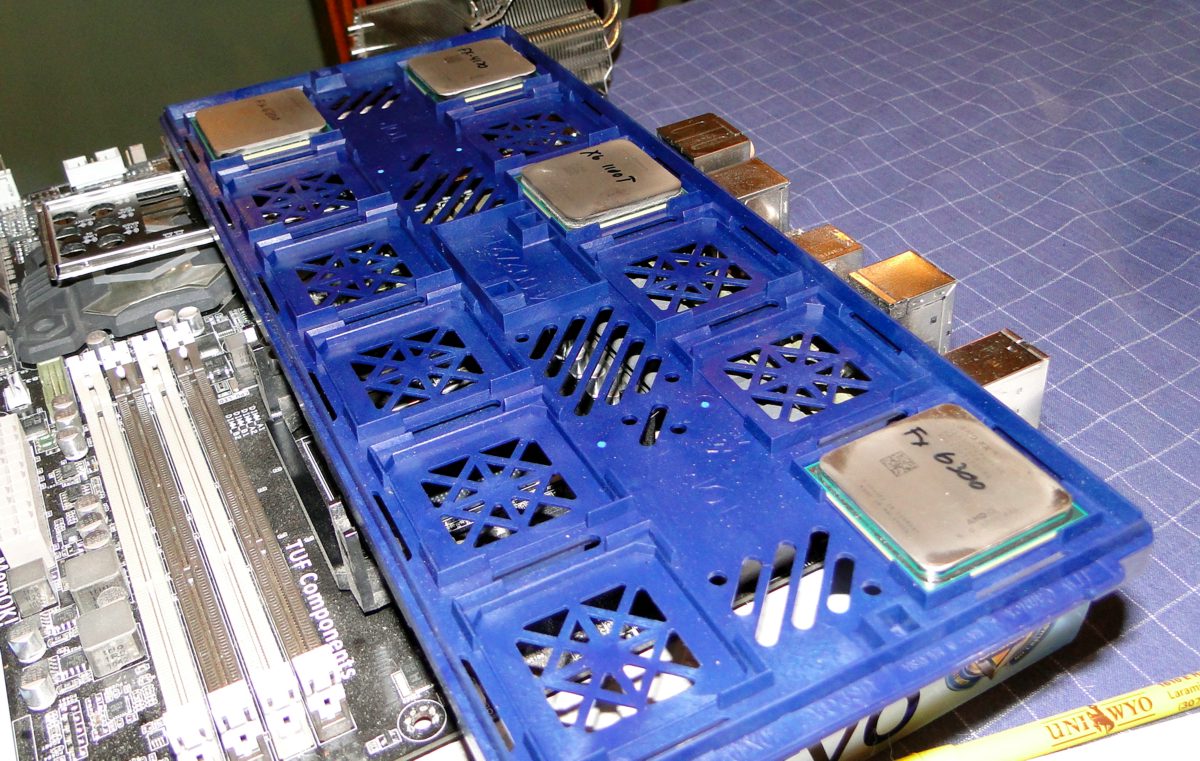 A tray of processors typically means a good week's worth of benchmarking.  My wife hates AMD.

AMD has fixed most of the issues with Zambezi with Vishera.  I was hoping for a larger increase in performance overall, but for that we are going to have to wait for Steamroller.  We do get a nice increase in performance, and just as importantly we see AMD fixing the TDP issues of the architecture.  This has allowed them to not only increase IPC, but to also get the top end products closer to the speeds they were initially designed for.  In this case the 4 GHz clock of the FX-8350 is right where the original Zambezi was supposed to be.

In the end I feel that AMD has swept aside a bit of a stinker and has introduced in its place a very competent part.  It is not a world beater.  It is not the second coming of the K8.  It does make AMD far more competitive with Intel, and a viable choice for consumers shopping at those price points.  An enthusiast style motherboard and FX-8350 will end up costing the same amount as an i7 3770K chip by itself.  In the vast majority of real world usage scenarios, there will be very little difference between the FX-8350 and the similarly priced i7 3570K.  Gaming should be more limited by the GPU, and since we have a plethora of multi-threaded applications which can utilize the full potential of the FX-8350 and FX-6300, they will continue to compete well with what Intel has at those price points. 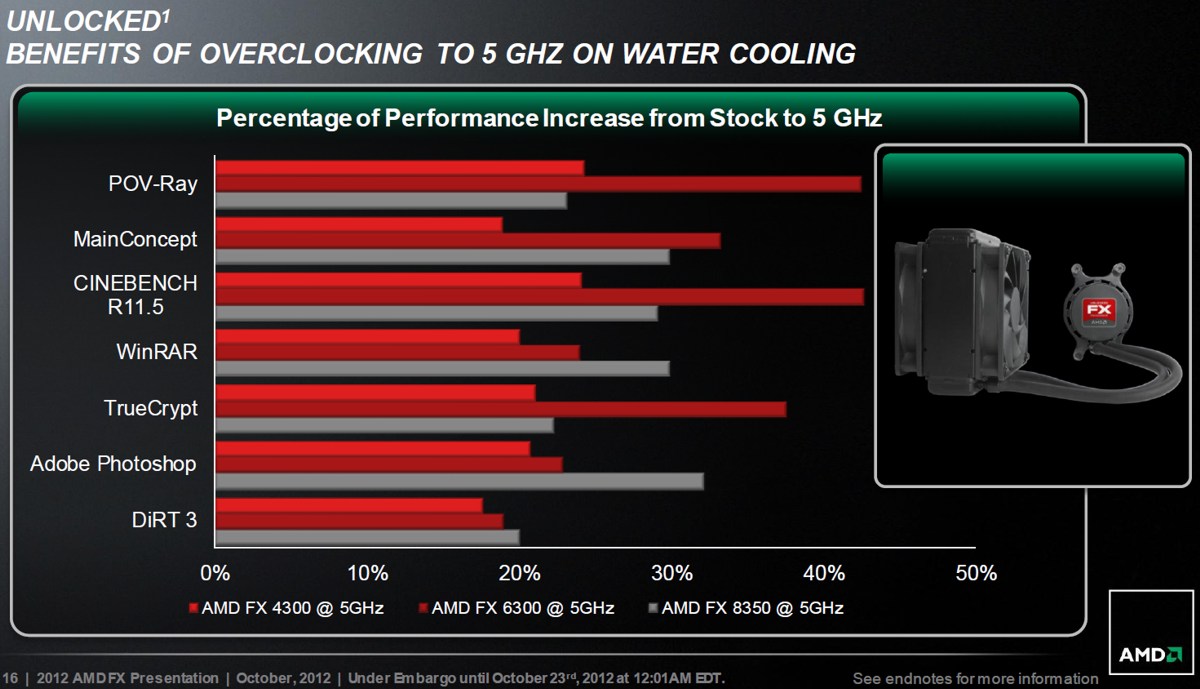 AMD claims that most of these processors can reach 5 GHz with high powered cooling solutions.  Either very large air coolers or the self-contained LCS systems should allow overclocking to this level.

I was hoping for some better success with overclocking, but my issue is more about heat than it is about the chips not wanting to run at those higher speeds.  The FX-8350 easily bumped past 60C at load when overclocked to 4.6 GHz with 1.5v.  More aggressive cooling would have seen the chip move well beyond that point.

AMD is keeping their head above water, and it looks like with Vishera we will actually see some product refreshes over the next year.  Certainly the FX-6300 and FX-4300 will be getting updates, but I fully expect to see a 4.2 GHz base clock FX-8300 series processor down the line.  As long as AMD is able to hang on and be a viable choice in the CPU market, then we as consumers will continue to be better served by both AMD and Intel.  If AMD were to falter and vanish, then we would be stuck with a monopoly on the desktop PC side.  At least in mobile we have some very aggressive ARM based products out there, but the desktop and server world will be poorly served by only one manufacturer.

The all new quad-core Barcelon?