AMD has a couple of surprises for gamers today, both using the "Never Settle" branding.  Later this morning you will see an article that looks at a new driver revision – 12.11 beta – that will be published this week (it maybe online already).  Promising performance increases is 20% and more, it should be an interesting discussion.

Another big push for AMD going into the holiday season will be the Never Settle game bundle; a collection of games included with a graphics card purchase unlike you have ever seen before.  And we aren't talking about scrub games here, with the HD 7900 series of cards you'll see Far Cry 3, Hitman: Absolution, Sleeping Dogs and Medal of Honor Warfighter.

Starting today, if you buy an AMD Radeon HD 7900 series of graphics cards, including the HD 7990, HD 7970 and HD 7950, you will get three full games absolutely free!  Far Cry 3, Hitman: Absolution and Sleeping Dogs to be exact.  Also, you will get a 20% discount on a copy of the new Medal of Honor: Warfighter.  And because I already asked, AMD assures us that this is the ONLY discount on Medal of Honor that will be available this year. 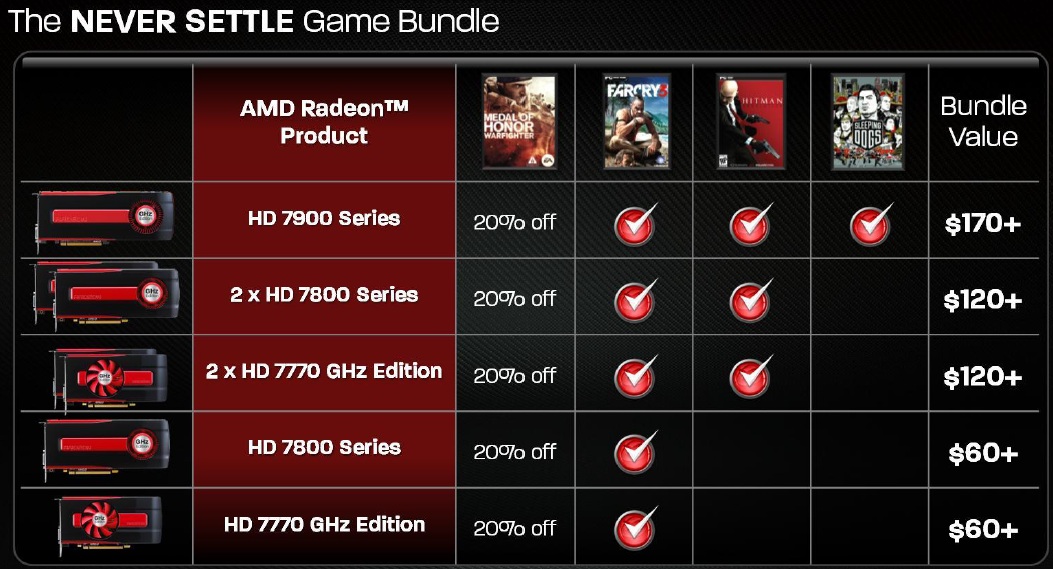 I realize that not every gamer is interested in every game that is released, but the value of the Never Settle bundle is really unmatched in anything I have seen before.  Valued at $170, the package that you can get by purchasing a Radeon HD 7950 3GB for $299 in theory brings the total out of pocket price of the GPU to $129!!

As I have mentioned previously, bundles are not a cure-all for performance issues, but they can definitely swing a buyer's decision when the other factors are close.  I think AMD will have a HUGE advantage going into the holiday buying season even though NVIDIA has the Assassin's Creed 3 bundle (with the GTX 650 Ti) and the Borderlands 2 bundle (with the GTX 660 Ti and above).

See what happens when you have healthy competition in the market?  Gamer's always come out ahead!