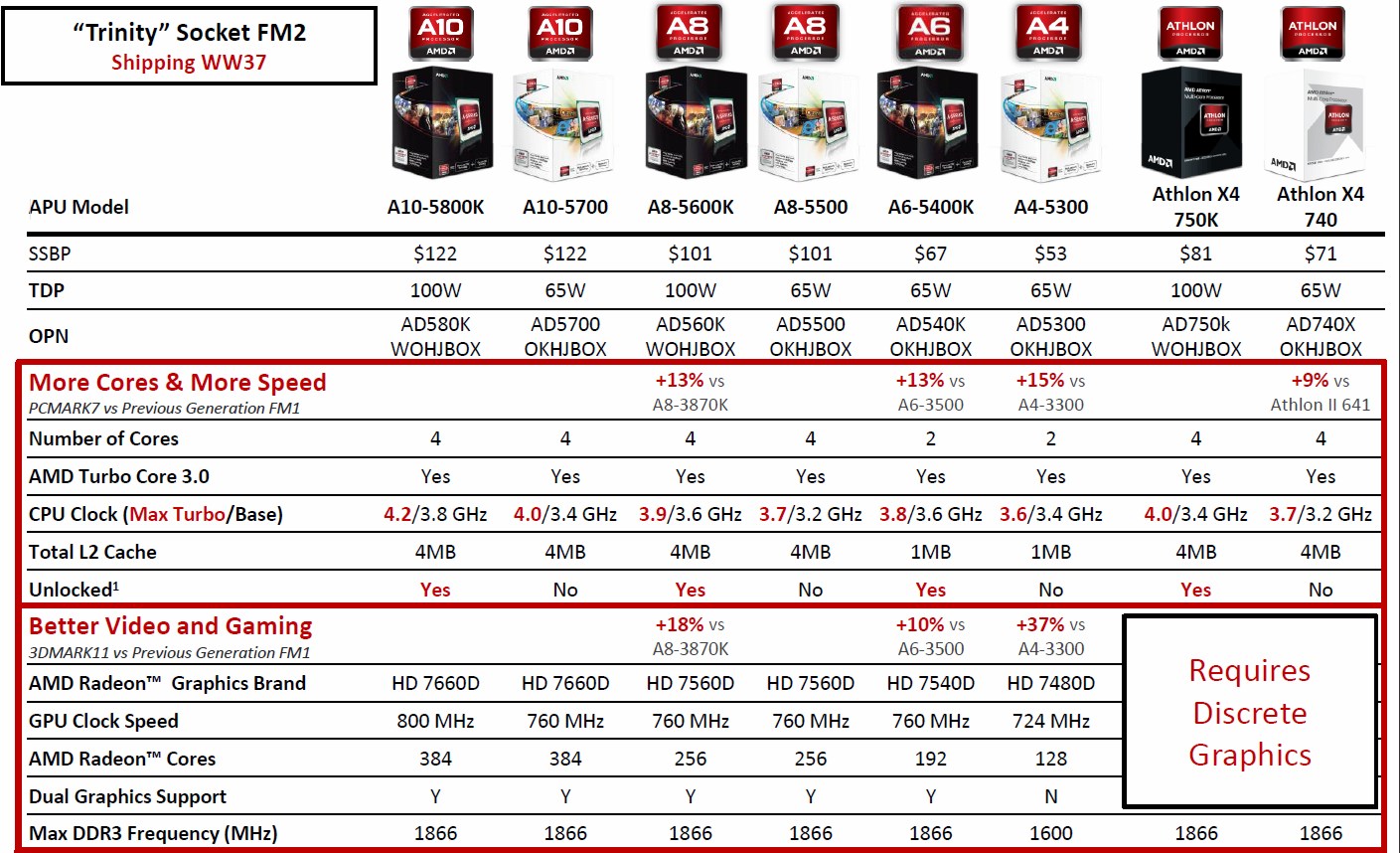 The APUs in this group can all be matched with a discrete graphics card from AMD to enable “Dual Graphics” functionality.  This is essentially a CrossFire solution using the onboard graphics and the discrete card.  The HD 6670 and below cards for the 6000 series and the HD 7670 and below for the 7000 series can all be matched with an APU.  This should in theory double performance in graphics heavy applications, and in reality it seems to work pretty well.  The only issue that we really see is that for a few dollars more a user can get a 7750 (which will not work in Dual Graphics mode) and outperform a DG enabled A10 5800K + HD 7670.

Virgo and the A85X

The FM2 platform featuring the Trinity processor is known as Virgo.  There is a new chipset being offered with FM2 though, and it is actually pretty impressive considering all the extras that it brings to the table.  The A85X is a single chip solution and features a whopping 8 ports of SATA 6G connectivity.  It also features 4 USB 3.0 ports as well as 10 more USB 2.0. 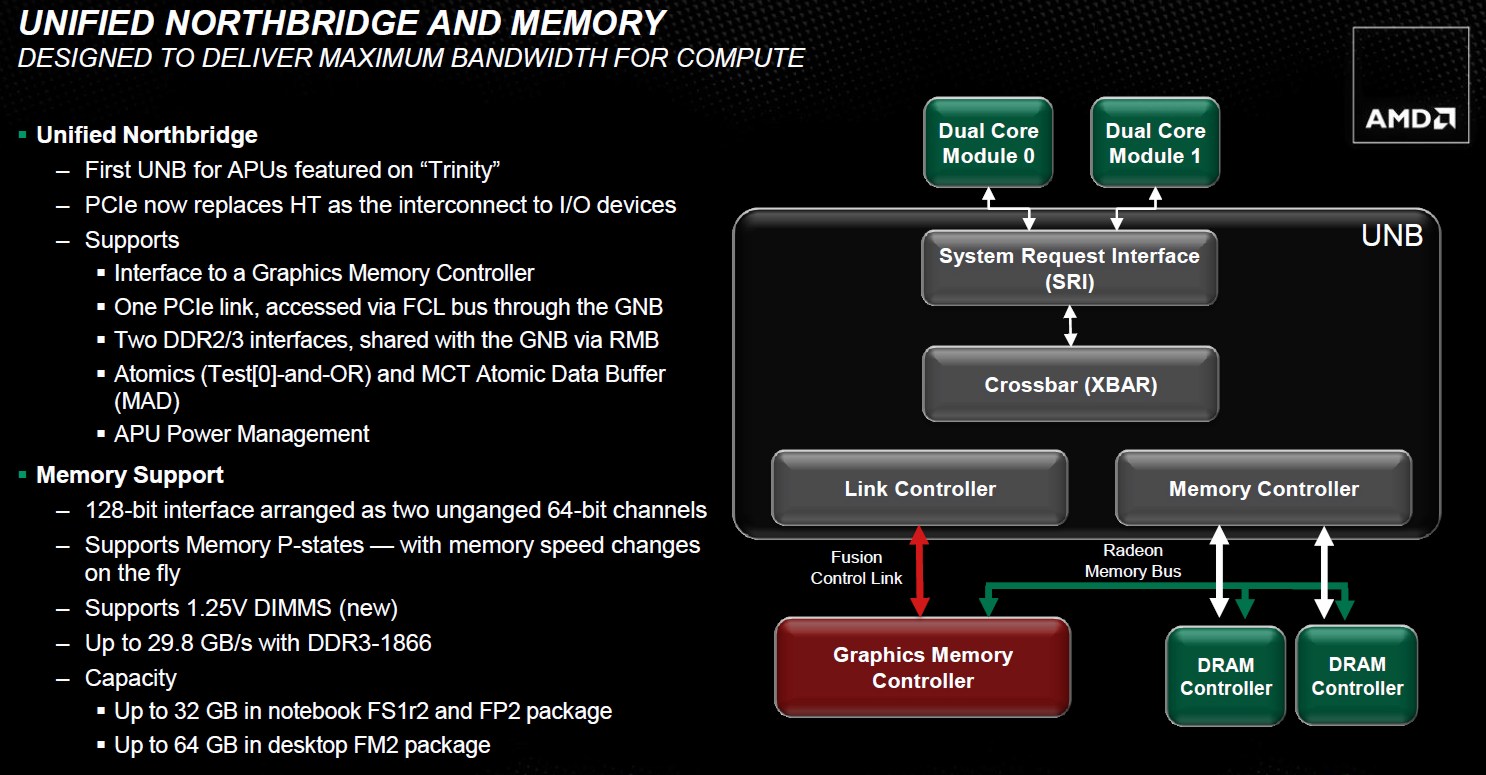 The A85X is still being made on TSMC’s 65 nm process, and these I/O chips are still not very large.  So it does not actually pay to make them on a smaller process without first integrating a whole bunch of features.  The chip itself runs around 7 watts TDP when fully configured.  AMD has again tweaked performance of the SATA controller, as well as adding another two ports.  While they may not match up well against the native Intel units in pure speed, the ability to use upwards of 8 SATA 6G drives is a big step forward.

FM2 is a socket that AMD plans on keeping a long time.  While FM1 was really only out around a year and a few months, AMD plans on introducing future processor families on FM2.  We know that Steamroller will be one of them, as it is being introduced sometime late next year.  AMD has committed to using FM2 throughout 2014. 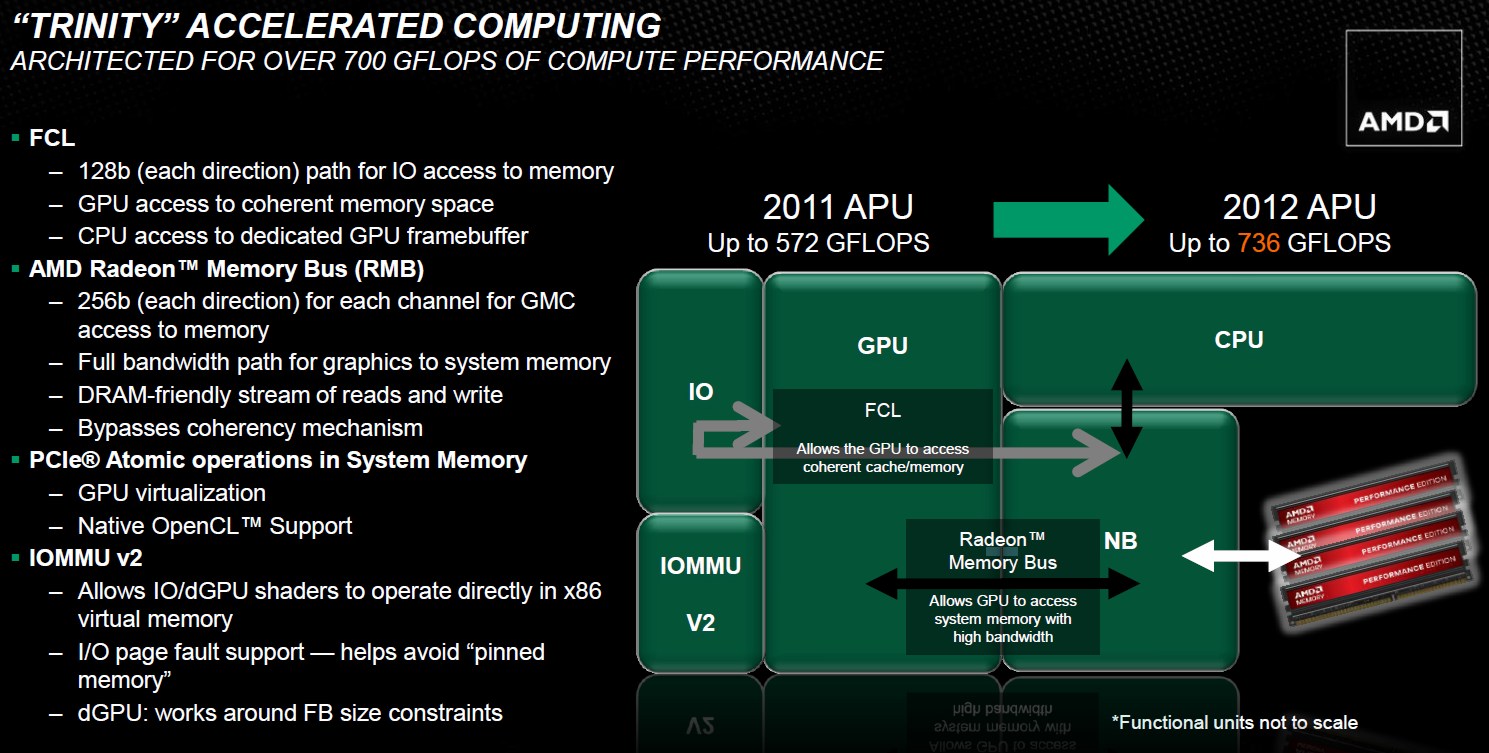 The older A55 and A75 chipsets are still compatible with Trinity and FM2, and they will be offered for sale as lower level products.  A55 does not support SATA 6G and USB 3.0, while A75 does.  While FM1 will die a slow a death, at least the chipsets supporting it will have a long and healthy life.

The first wave of FM2 motherboards are actually quite robust and mature, for being a new product.  I think that we can think the heritage of the FM1 platform, and the overall similarities of the A75 and A85X chipsets.

The F2A85-M Pro is a micro-ATX motherboard that is aimed at the budget enthusiast.  It has higher end overclocking features, but does not approach products like the Maximus series on the Intel side.  It features a more robust power circuitry than what may typically be required by a 100 watt TDP part.  The EUFI based BIOS is chock full of overclocking and power saving features, and nearly any setting can be accessed through the BIOS. 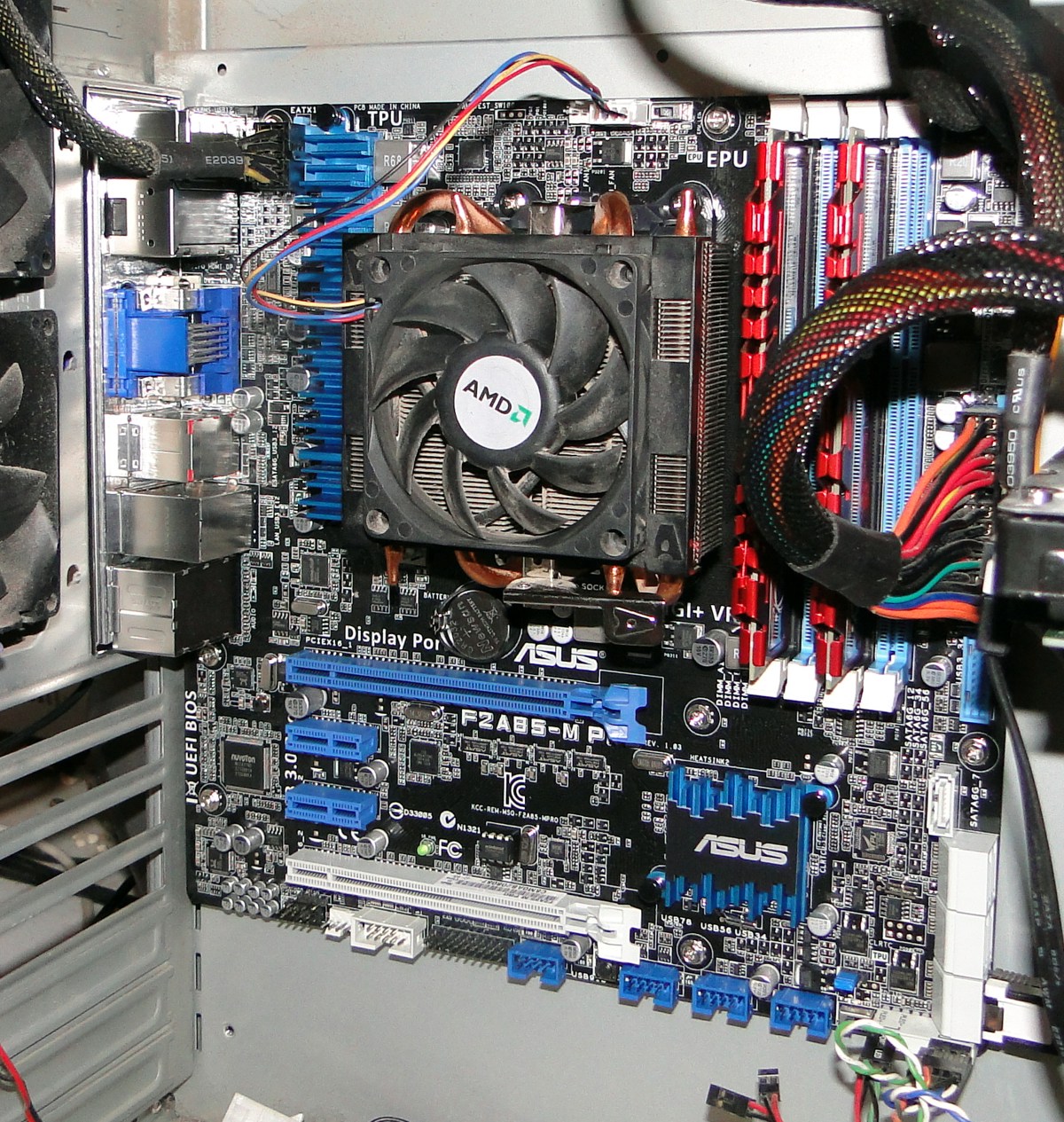 Overall build quality seemed good.  The pack in materials were adequate, but not exactly over the top.  The board felt fairly roomy, even though it was a micro-ATX form factor.  Seven SATA 6G ports are available on the board, and the last is on the back as an e-SATA port.  The A85X has four native USB 3.0 ports, and the final two are provided by a ASMedia controller.  The back of the board features four of the said USB 3.0 ports, while a header on the board provides front panel USB 3.0 support.

The video outputs on this board are actually quite impressive.  There is a DVI-D port (single link), DB-15 (VGA), HDMI, and finally a DisplayPort 1.2.  The DP can drive a 4K monitor, once those are available.  Again, this board can support Eyefinity just through the APU.  To accomplish this though, either a DP hub is needed, or three different monitors with those above listed connections.

Trinity has the ability to split is 1 x 16X slot into 2 x 8X slots.  Llano was unable to do this, so CrossFire was not officially supported.  CrossFire does work perfectly fine with Trinity.  SLI on the other hand is not licensed for AMD processors, only the AMD 900 series of chipsets support that functionality.  Pity.  Trinity is also “only” PCI-E 2.0 compliant.  I suspect that the change from FM1 to FM2 does in fact encompass what is needed to run PCI-E 3.0 connections, but until Steamroller comes out we will not likely see PCI-E 3.0 with Trinity.