AMD essentially promised about 20% to 35% more performance for the same power consumption when going from Llano to Trinity.  So let us take a good look at what our idle power stands out, and then where it is when fully loaded with both the CPU and GPU chugging along. 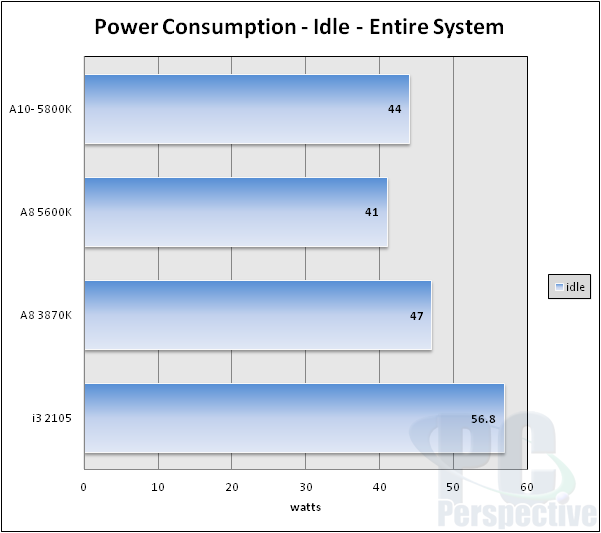 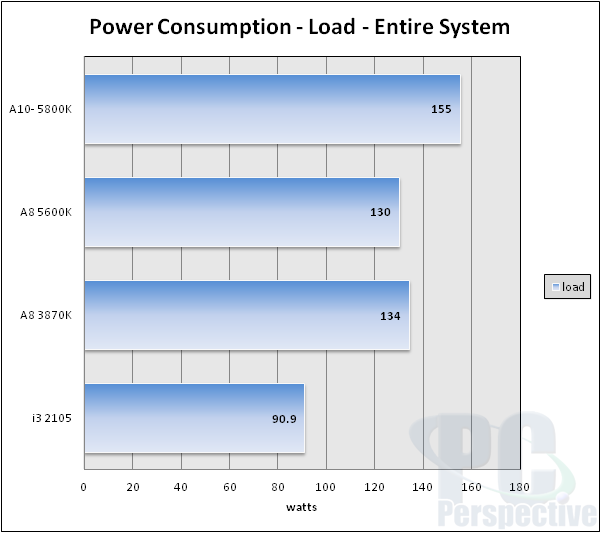 Idle is ridiculously low with all of these processors.  41 watts for the 5600K is just sorta nuts.  The older i3, though based on Intels 32 nm process, has a much higher idle draw.  The 3870K is also pretty low, but does not approach the 5600K.  Once we load things up it changes a lot.  The 5800K is much faster overall, in nearly every test, than the 3870K.  But it eats up about 21 more watts at that speed.  The 5600K on the other hand is right at, or slightly faster throughout testing than the 3870K, but comes in around 4 watts less.  The new Trinity architecture is more efficient than Llano, but it might be hard to say that it is 20% faster with the same power consumption.  Remember, these individual parts I have may not be representative of the CPUs available as a whole.

I was very ready to take Trinity to 5 GHz and beyond.  I had thought that AMD would have fixed all those nasty little power issues that Bulldozer had.  Here was a part that should clock higher, eat less power, and produce less heat.  It didn’t work out that well.

The graphics portion is also able to be overclocked.  This sample was able to hit 1020 MHz without issue.  This does result in a nice boost in graphics performance, and that is further enhanced when overclocking the memory from DDR-3 1866 to DDR-3 2100 speeds.  It is a fun little number to play with, but so far I was disappointed that it was unable to get past 4.5 GHz.