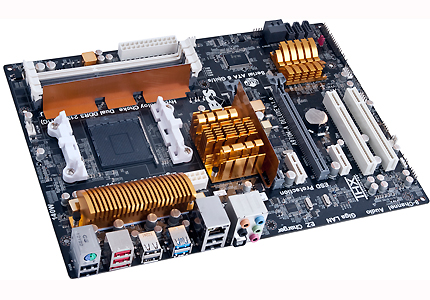 Elitegroup Computer Systems is on a roll this week for launching motherboards supporting AMD processors. In addition to its mini ITX offerings, the company is launching the A970M-A Deluxe in it’s full gold-clad ATX form factor glory (heh). It offers up support for AMD’s latest FX and Phenom II series processors along with SATA III 6Gbps and USB 3.0 for speedy storage. Unfortunately, there is no PCI-E 3.0. Otherwise, this is a high end motherboard and has the feature set to match.

In typical ECS fashion, the company has outfitted the board with gold colored heatsinks, EZ BIOS, solid capacitors, “Thor Ultra Protection,” a dust shield, and support for up to 140W TDP processors, among other features. The EZ BIOS is actually a uEFI BIOS that allows you to tweak settings using a graphical interface as well as automatic overclocking functionality that can overclock the AMD processor for you (to an extent).

Internal IO and board layout 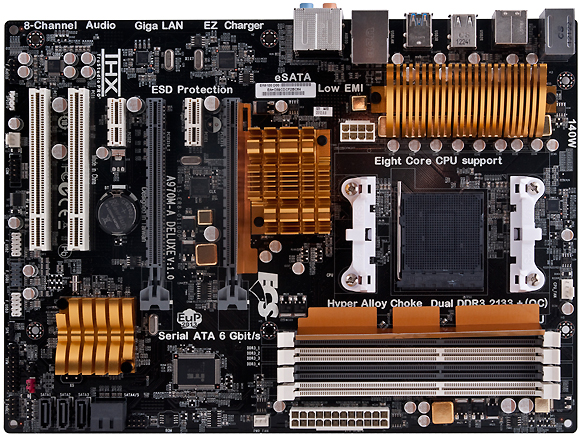 The board has several gold-colored heatsinks over the VRM and southbridge hardware. Along the top of the board lies the AM3+ CPU socket and four DDR3 DIMM slots. The board supports up to 2133 MHz memory when overclocked and up to 32 GB of RAM (when using 8GB DIMMs). Expansion slots include two PCI-E 2.0 x16 slots, two PCI-E x1 slots, and two legacy PCI slots. The lower-right corner features five SATA III 6Gbps ports – two of which are positioned at right angles to the board. Expansion headers include three fan headers, one COM header, and three USB 2.0 headers (up to 6 additional ports) are also included on the board.

While we do not yet have US pricing, when converted from the stated RS 9,000 (according to Think Digit)to USD, the board is just under $170. No word yet on stateside availability. You can find more information on the ECS specifcations page.