Another GK106 Completes the Stack

It has been an interesting year for graphics cards and 2012 still has another solid quarter of releases ahead of it.  With the launch of AMD's 7000-series back in January, followed by the start of NVIDIA's Kepler lineup in March, we have had new graphics cards on a very regular basis ever since.  And while AMD's Radeon HD 7000 cards seemed to be bunched together a bit better, NVIDIA has staggered the release of the various Kepler cards, either because of capacity at the manufacturing facilities or due to product marketing plans – take your pick.

Today we see the completion of the NVIDIA GeForce GTX 600 stack (if you believe the PR at NVIDIA) with the release of the GeForce GTX 650 Ti, a $150 graphics card that fills in the gap between the somewhat anemic GTX 650 and GT 640 cards and the most recently unveiled card, the GTX 660 2GB that currently sells for $229. 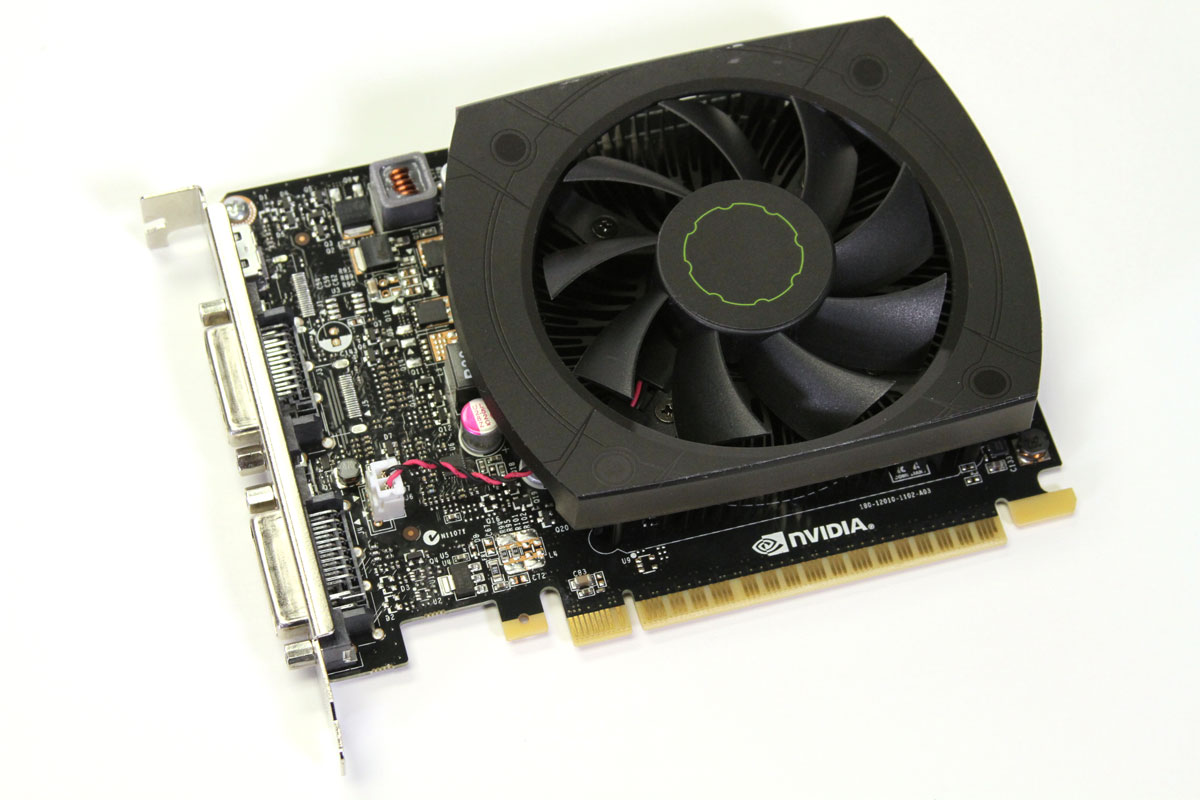 The GTX 650 Ti has more in common with the GTX 660 than it does the GTX 650, both being based on the GK106 GPU, but is missing some of the unique features that NVIDIA has touted of the 600-series cards like GPU Boost.  Let's dive into the product and see if this new card will be the best option for those of you with $150 graphics budgets.

As I mentioned above, the GTX 650 Ti is based on the same GK106 GPU as the GTX 660 but with some very important hardware changes.  First, this is not a FULL GK106 GPU and drops from 960 CUDA cores to 768 CUDA cores, a drop of 20%.  Remember that the GK106 die has a very odd configuration with two and a half GPCs, the two full ones with a pair of SMX units and the third with a single SMX.  The GTX 650 Ti will be available in either 2 or 3 GPC configurations: 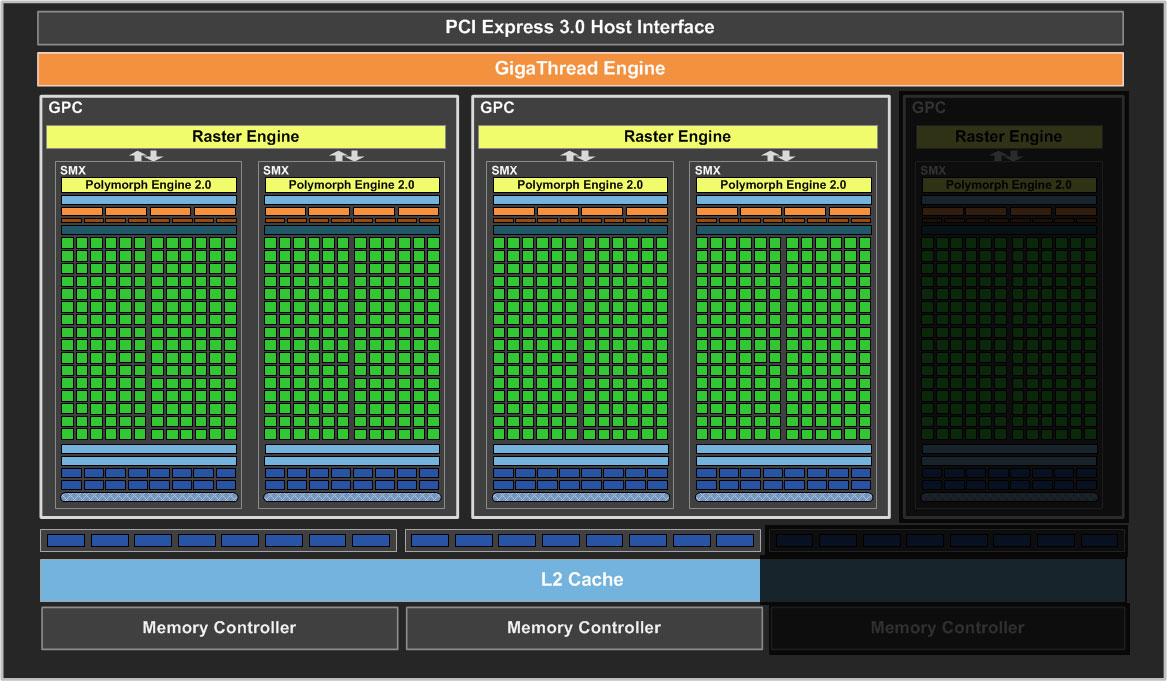 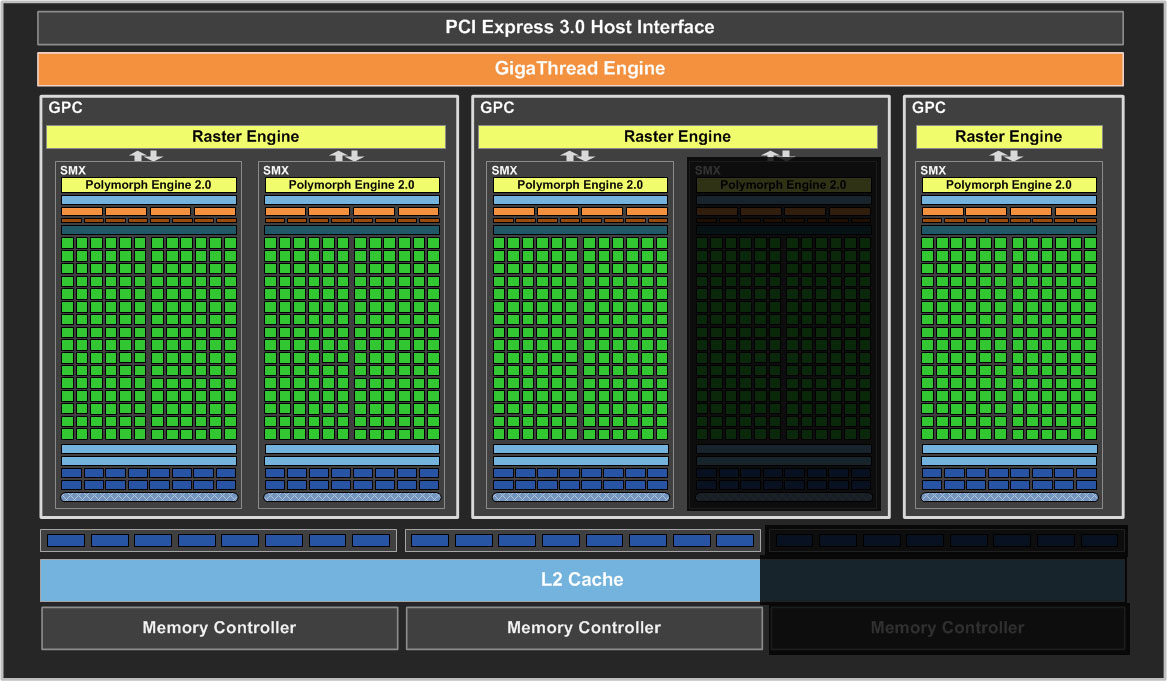 Option 2: One full GPC and two GPCs with a single SMX each

Performance wise, NVIDIA says there should be no difference between the two configurations but this does allow the company to salvage more workable GPUs from each wafer, saving money in the long run.

Other important performance changes with the GTX 650 Ti include a move from a 192-bit to a 128-bit memory bus, 16 ROP units rather than 24 and a move from 384KB of L2 cache to 256KB of L2.  The frame buffer itself is now 1GB rather than 2GB, so you'll see some instances of performance drops at higher settings like Battlefield 3 in Ultra that require that kind of memory capacity.  Memory bandwidth drops by a noticeable amount (40% or so) to 86.4 GB/s. 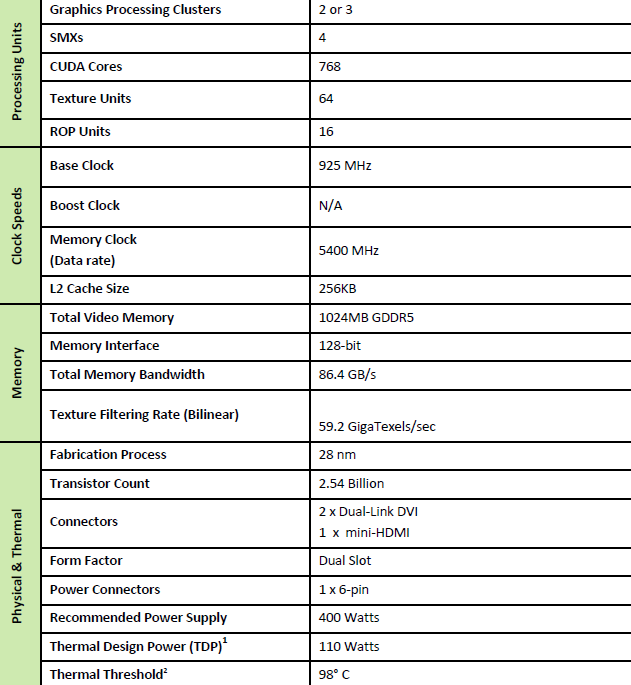 The clock rate of the reference GeForce GTX 650 Ti we tested was 925 MHz with a memory speed of 5.4 GHz – the first GTX class of card to move away from the faster GDDR5 memory at 6.0 GHz.

No GPU Boost and No SLI

Another thing you may have noticed is that we didn't quote a Boost Clock – something we have seen on every GTX-class GPU since the release of the GTX 680 in March.  The GTX 650 Ti does not support GPU Boost and you'll see that the clock rates will run at 925 MHz consistently; a return to the old days if you will.

NVIDIA wasn't completely open with us stating basically that the main driver of the decision was cost – there are some power monitoring circuits that can be removed from the PCB if you don't need GPU Boost.  When I asked exactly what those components were and how much they saved the company, no one really wanted to get into details. 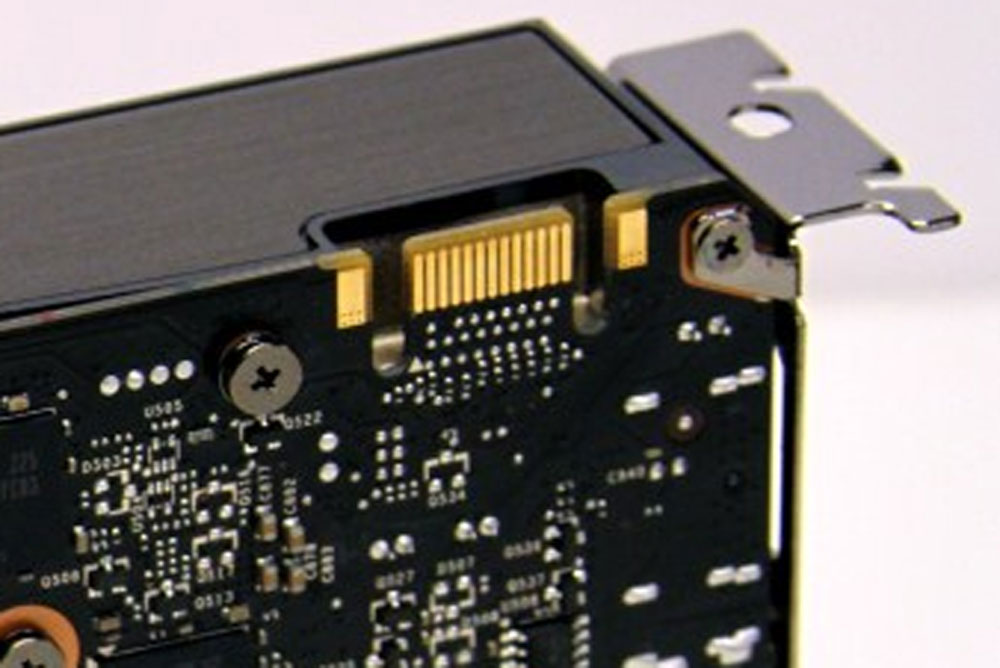 SLI has been removed from the GTX 650 Ti

With the removal of SLI support as well, which NVIDIA also claims was removed for cost considerations, you can start to see that NVIDIA might be playing a positioning game more than anything else.  Would the performance of a pair of GTX 650 Ti's be able to outperform a single GTX 660 Ti pretty easily and would that put a damper on the sales of that part?  We won't know for sure but I would think that the audience for a $150 card and the audience for a $300 card are pretty disparate.

Based on these kind of numbers, I would have thought NVIDIA to brand the GTX 650 Ti as the "GT 650" to emphasize that difference in features – the GeForce GTX brand was supposed to be aimed at PC gamers and PC gamers want options like SLI and GPU Boost.

With the release of the GTX 650 Ti today, regardless of the specific feature set, NVIDIA is completing their Kepler card lineup with options from the GK107-based GT 640 all the way up to the dual-GPU GTX 690 4GB card released in April. 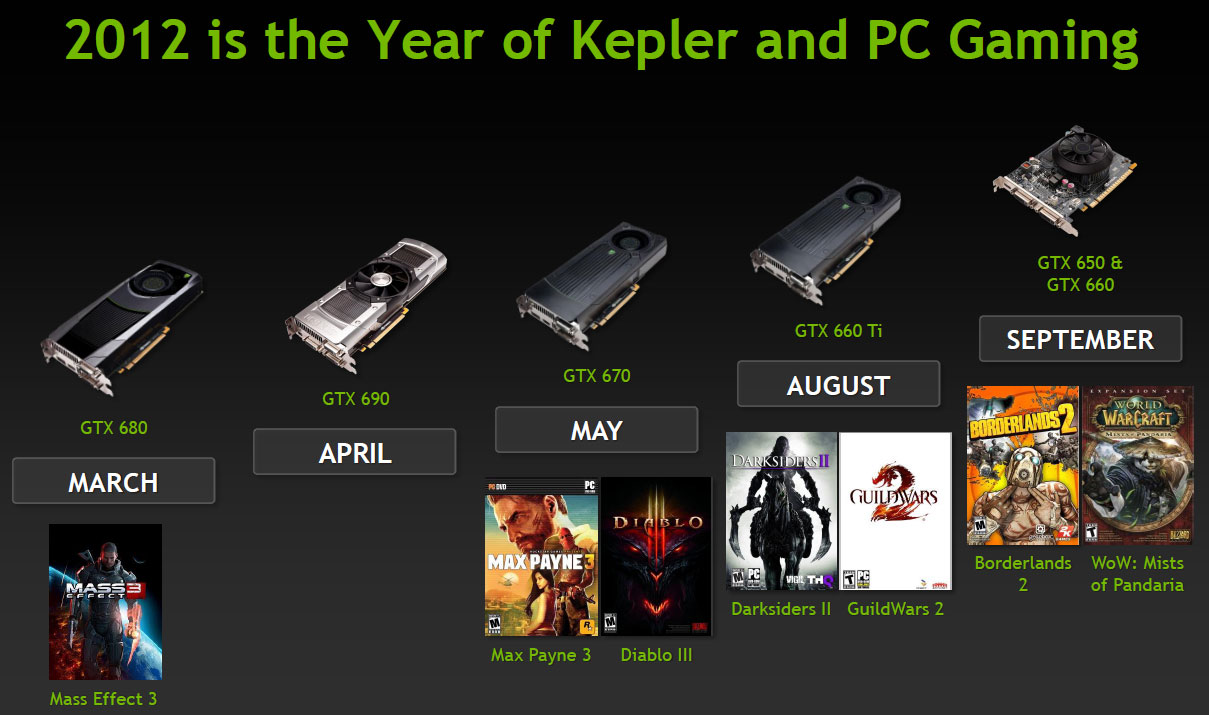 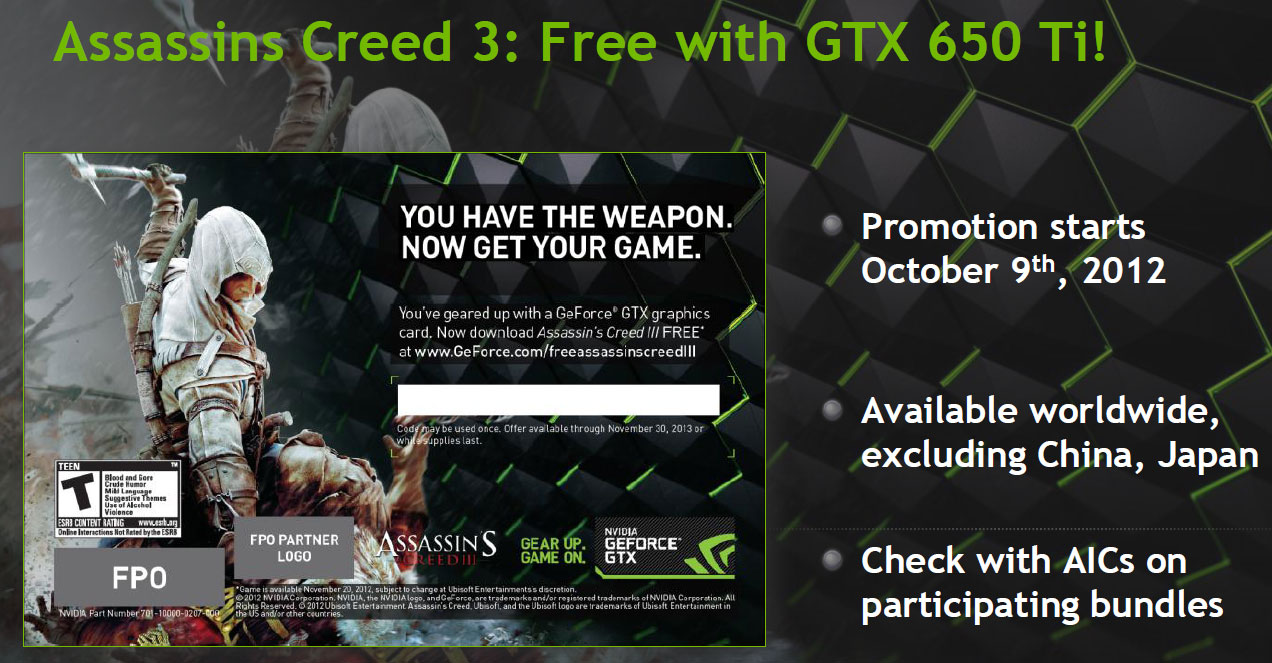 Also a bold move from NVIDIA – many vendors will be able to include a free copy of the upcoming Assassins Creed 3 game with the purchase of a new GTX 650 Ti.  While many hardcore PC gamers (like Jeremy) might not think of AC3 as a great PC title, I think the inclusion of a tier-1 level game like this valued at $50-60 can really make a significant impact on the purchasing decision of a $150 video card.